I have an Aquael 30L running in my office since april, but the tank-bug has bitten me so it is time for a tank in the living room.

I do like to hear some opinions on the (low-tech) scape.
Since the cube's shape I need the hardscape to be more "vertical"
A bit like George Farmer did in this vid:
I am planning on using Amazonia II with some ada colorado sand in the front and a bit on the sides. Perhaps with some Dennerle Plantahunter Rio Xingu.
Then some dragonstones as a border between the sand and soil.
Also 3 or 4 taller driftwood-pieces (30 a 40 cm) and some smaller driftwood pieces and some small twigs.

I can use some trimmings/runners from my other tank (Taxiphyllum "Spiky"moss, Anubia nana "mini" Vallisneria Spiralis, Ceratopterus Thalictroides, Rotala Rotundifolia) and have some Photos I want/can use.

Livestock:
After cycling I want to move/add my Neon Tetra, Ember Tetra, Anatome Helena and RC shrimp,
And Perhaps later on some Otocinclus Affinis or Amano Shrimp.

So, time for my questions.
1. Do you guys think I should use Dragonstone or switch to Seiryu/Landscape stone?
2. If using dragonstone, would you suggest using ADA Colorado sand or will it be to much brown, also with that driftwood in the scape? Or skip the Colorado sand and use the Rio Xingu instead?
3. Did I choose enough plants for this type of aquarium?
4. Do you recommend other plants or are there plants in my list that wont do well in this kind of low-tech, kinda low light set-up?
5. Do I need the glass plate on top if I want to keep the above lifestock? Especially a bit worried about the Otocinclus and Amano shrimp.
6. Can I cut the Dennerle glass top or is it tempered? It wont fit now because the HOB-filter.

I know, lots of question. I appreciate it if you can answer a few or give some opinions on my intended scape.

I don't think it would look too 'brown' with Dragon stone, and sand. I've done a similar setup and it simply looks quite naturalistic... you wouldn't likely get a mix of different coloured rocks and sand in nature.

Definitely enough plants and a good selection, a couple of thoughts... I've always struggles with portals taking an age to adjusting to underwater growth in low tech and never really quite getting there, yours may fair better going from an established tank. I would consider switching to the narrow java fern, trident is a little trickier and George himself regularly says trident requires co2.

If you keep the water level low enough I don't think you would need a glass top. It's the amanos that would concern me. Have a think about what plants or hardscape they could use to climb out and minimise any opportunities.

Microsorum Trident doesn’t seem to do well without CO2 from both my own experience and George Farmer’s. This is also true for Microsorum Needle Leaf, which is hard to get, but not for the more common Microsorum Narrow, which would be your best option for a fine textured Microsorum.

I find that IG is a great place to find inspiration, but George’s scape is already a great basis for your own scape.
S

Hi Jules.
I have just joined up and was recommended to have a look at your post, and I am really glad I did! How is it all going?
I was also thinking of using one of the smaller Dennerle Cubes with a hang on the back filter, low tech.

Could you post a bit of an update? How was the filter? plants selection? (which i have already used for my AG wish list) and last but not least was the 8W lighting, was it sufficient for the plants?
Im slightly confused at what is considered the 'brightest light for a low tech aquarium' as Dennerle offer their 6W light with 10Ltr- 20 Ltr- 30 Ltr tank packages?
Maybe thats a question for another day.
Thank you!
Si

FishLifeLondon said:
Microsorum Trident doesn’t seem to do well without CO2 from both my own experience and George Farmer’s. This is also true for Microsorum Needle Leaf, which is hard to get, but not for the more common Microsorum Narrow, which would be your best option for a fine textured Microsorum.

I find that IG is a great place to find inspiration, but George’s scape is already a great basis for your own scape.
Click to expand... 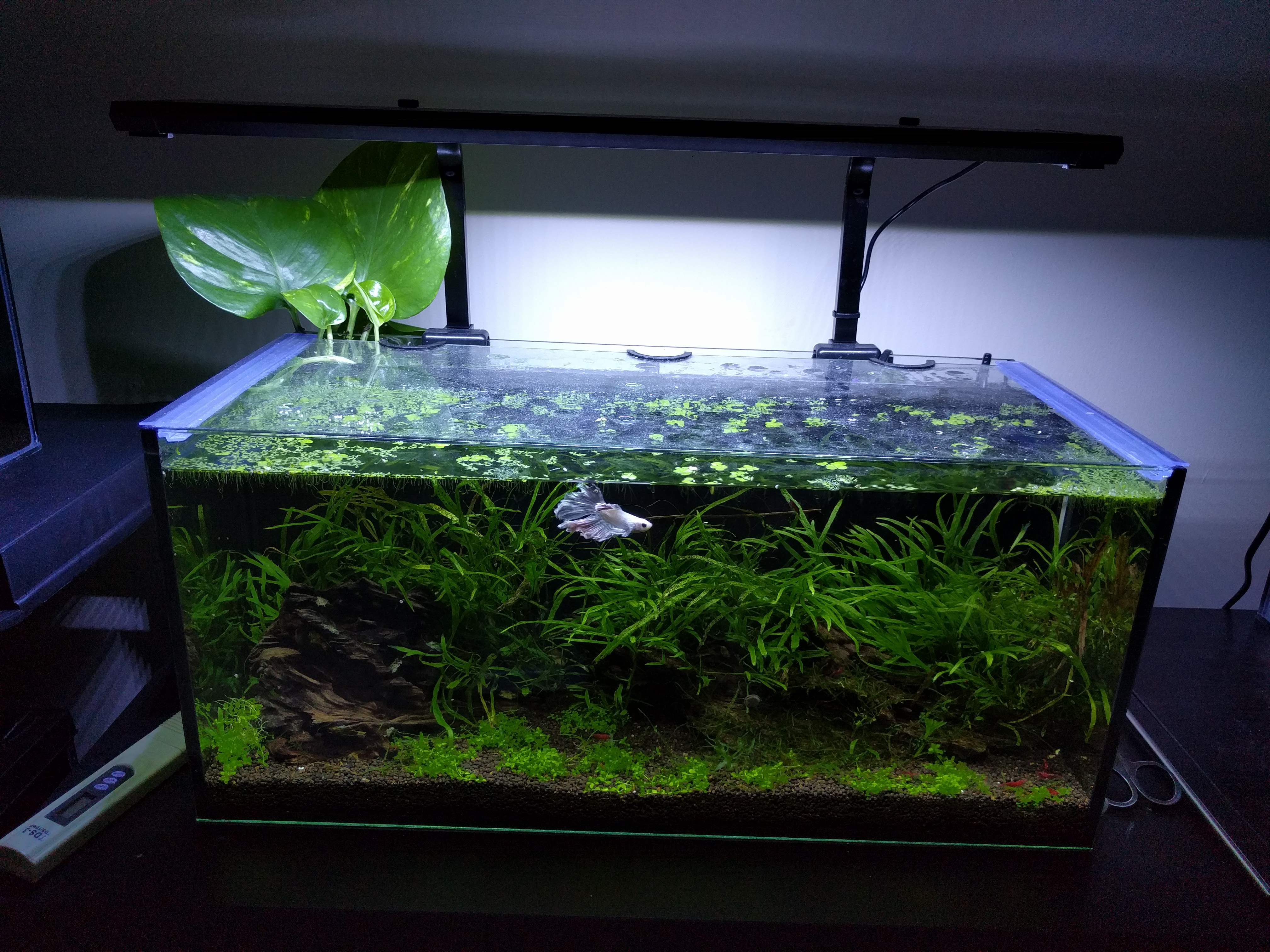 Looking forward to seeing how you get on with this as I’ve just got the same tank to set up. I don’t think you can cut the glass but I bought the “short cover” from ProShrimp.

Edit: just realised the OP was from last year. Any update?

Thanks, this was an old tank long since emptied, but I miss it sometimes. It was a converted Betta trio with dividers removed, the glass lid was superb for maintaining humidity for them, and the light seemed to be optimal to grow plants just right.
You must log in or register to reply here.
Similar threads