Here's the 180 gallon tank's results after a few weeks of HC growth, I started with about 12x12cm mat and now have about 180cmX30cm mat a few weeks later.

The ADA As is now well cycled, has roots and fungi embedded in it, All I do is fill it and then add lots of stems in the other regions which tend to fill in fast.

As ADA aqua soil has NH4, this helps to cycle the bacteria in the sediment which will help remove the NH4 and start the tank faster. Additionally, upon filling, you should do another quick 90-100% water changes as a lot of NH4 can leach over the few weeks you have it soaking. This will remove the higher than normal level of NH4 and keep things running well.

the 1st week, you should do 3 water changes after the first day set up, say 50-70% and then you can likely relax with 2x a week water changes and 1x a week after 1 month.

The ADA aqua soil I have has been pretty variable.
If you see any variations, change the water and keep doing it until the water stays clear before backing off. 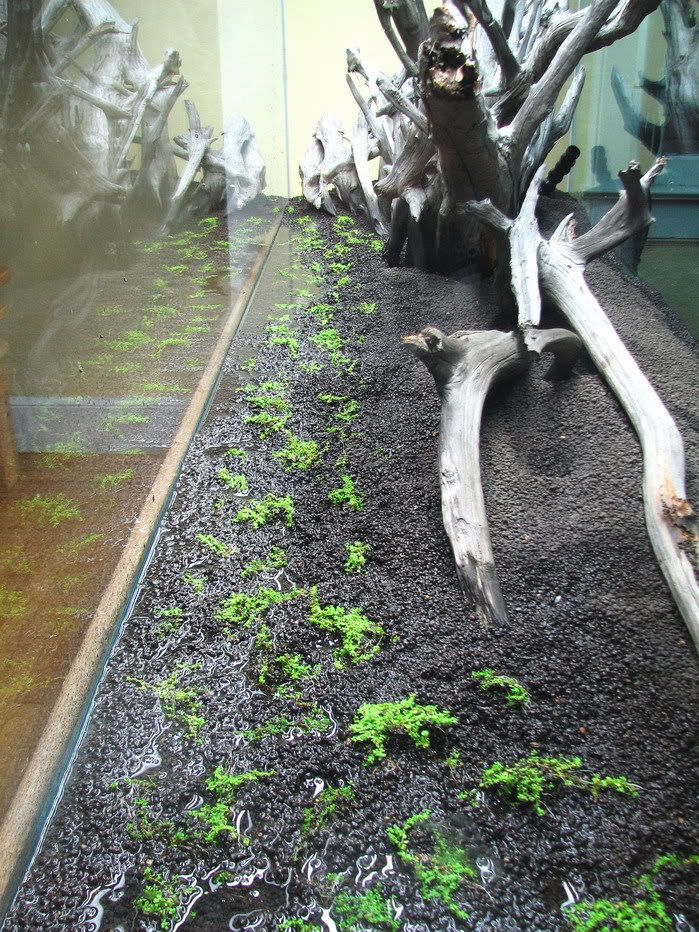 And a few weeks later: 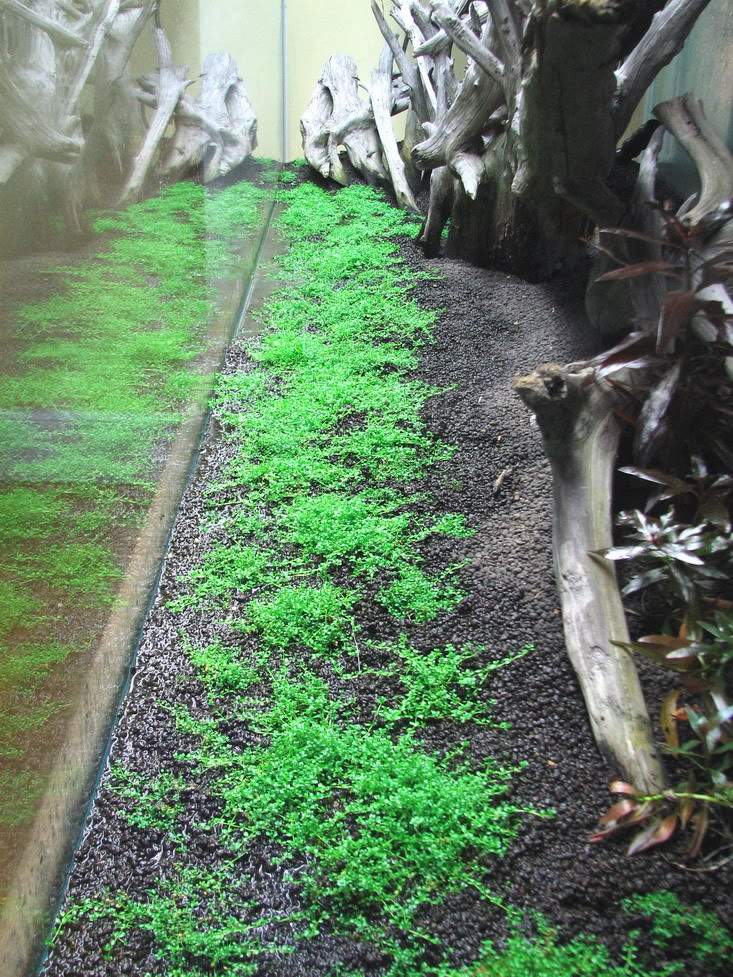 Also, I grew the HC out in ADA AS prior, so I was careful not to mess up the root ball etc, and I just dug depressions to sit each bunch of HC, root ball and all, in the new soil without any replanting really done.

Easier and faster too.

Hi Tom,
It appears you are also dry starting some stems in the back there. If that works out it seems one ought to be able to dry start almost the entire scape as long as the plants are in the emersed form no? Are those some kind of Ludwigia or Amania?

Cool, i cant get over how fantastic that wood looks!
Aaron North
My Flickr Account | Equipment needed for setting up an FE | Algae & Nutrients

Very cool. Thanks for sharing, Tom.

Are there any front on pictures of the tank?
P

Opps, I had an earlier HC example there, check out the difference now.

The stems are just L granulosus/perunesis, I ran out of room in another tank so I just tossed them in there for now, Ludwigia cuba also grows well, hairgrass, gloss etc, most plants will do pretty well if you keep a lid and the humidity high. 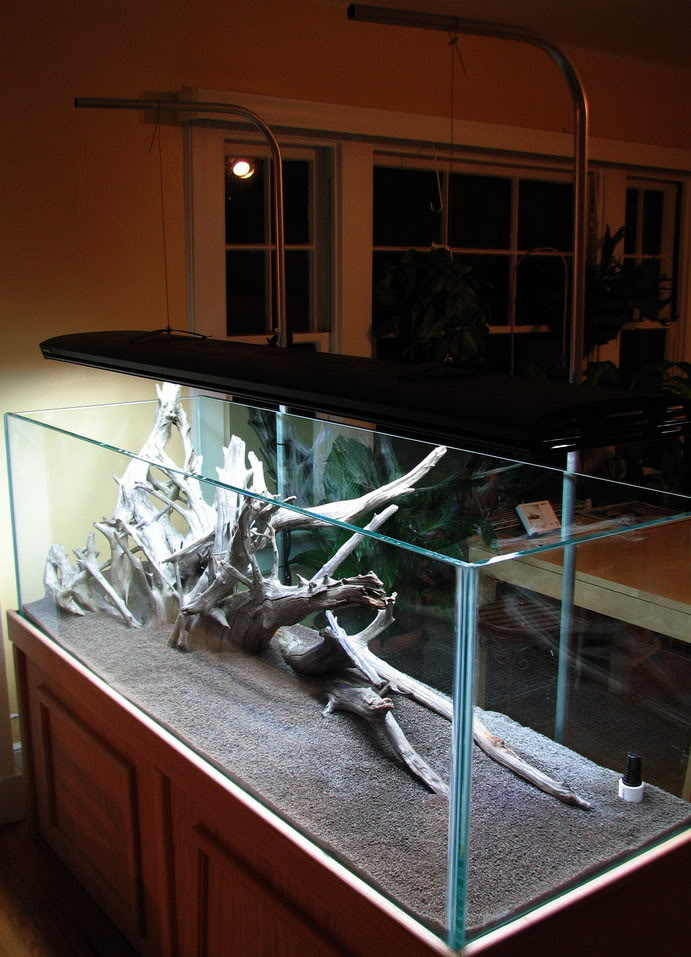 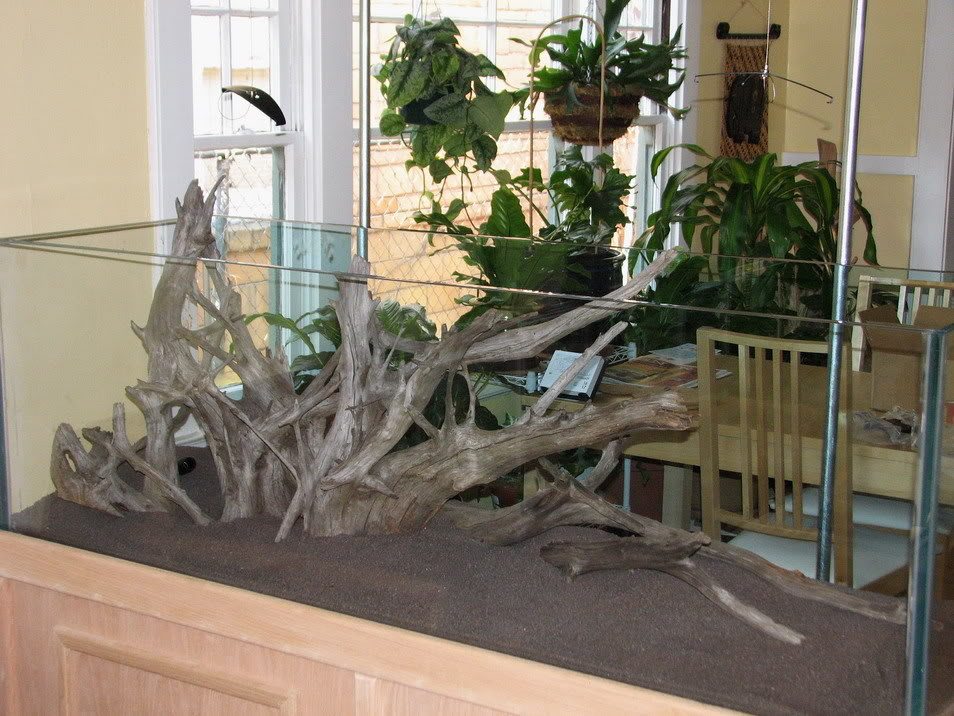 I'm trying this method of growing HC in a small tank.. Slow to start but then by week two the HC goes nuts

Any plans on stocking?

Awesome.
I love the idea of getting the AS cycled and the plants established before filling up. Doing this would suggest that the risk of an algae bloom is much slimmer? - if you have the energy to start a set up in this manner.

Yes, faster set up.
I have had some bad batches of ADA AS, so I'm leary.
This method reduces a lot of the water changes.
You can do 2-3x 90-100% water changes once you first flood the tank with a few hours in between to remove any left over in the sediment.

That should remove most of it.
Stocking will be mostly SA fish, smaller community and rare plecos(red ark pencil and espesi, Apistos, Cardinals etc).
Wood I collected up near the mouth of Eel river here in California. I do not think I've bought driftwood in many years and it's rare that I do/would.

I may even fill this tank sometime this week or next. Dang 96w bulbs where broken, still waiting for them to replace them for me.

Tom - Is the wood resting/standing up freely or have you cut the bottoms or siliconed it into position? Would be very lucky to get pieces like that which naturally were in the freestanding format. lol.

I think I may take a look around my local nature reserve sometime this week to see if I can find any nice specimens for my next effort as I quite like the 'rough/raw' look of the wood you have got there compare to the spindly redmoor.

Andy
formerly known as "Supercoley1"
You must log in or register to reply here.
Similar threads