"Dutch something or the other" 120 Gal

I wanted a more stem plant tank with some color contrast, nice plant streets and something to highlight to wood I sell. So the goal is more a colorful garden, bright and cheery. I also wanted some nice plants that I could sell so the tank makes enough $ to pay for the energy use, and hopefully a bit more, this will motivate me to garden more as well

The style is more dutch than anything, with the wood acting something like an old bonsai tree with the roots coming out towards the front. This is FAR from natural style..........you'd NEVER see anything like this in any natural system.

Some have accused the dutch style as being similar to Reef tanks: "they look like Fruits stands selling neatly stacked colorful produce."

I'm not privy to that, and they have a point.

So I thought I'd toss some wood and use the natural curves and flow to add the plants into distinct groupings and work from there. So it's neither Dutch really, nor Nature.

I like "streets of plants" wondering back to the rear, this is a dutch style, and I like contrast(the textures are poorly worked here, but I'll work on this and change things little by little, the colors are green red, green red etc.......like Xmas). I also have the divisions keeping the various groups apart as well, this is somewhat Dutch in that respect also. I have not done so, but I shall.........keep the front edge about 2-3 cm clear of any plants and not allow them to press against the wall.

This is more of a "garden style" really.

I want color and have it. I have a few newer plants and I'll reword the sides some more, wait till other stems grow in more, thicken up etc, and the tank is only about 4 weeks old, I torn the old scape down, it was too, well, boring.......this is the 100% opposite direction almost.

So in another 1-2 months, the scape will come together pretty nicely, I'm still a bit undecided on the species of fish that will be the main community.

I also had to wait for various plants to come in and also fill out, I'm thinning the dowonoi, and allowing others to fill in more.

I was going to use S belem, but it's a bit too weedy and large in the background, it loves current though.

Things to work on:

1. Allow most groups to fill in and thicken up. Then I can trim then with a staggered look front to back going upwards from low to high. This is really a key part.

2. Remove plants a bit on the sides, these where just nursery areas for some other plants.

3. Add a few smaller pieces of wood to make more spots to add a couple of plantings inside.

4. Add a bit more ADA AS to the rear and shore up the level in the back a bit more.

5. Move some plant groups around to get better textural differences, not just the red/green/red/green thing.......looks like "Christmas" almost.
Maybe I could put some plastic candy canes in there in Dec no?
A plastic Santa Sleigh?

6. Clean the tank up good and remove filter overflow and Vortech, and get a decent picture later. I'm lazy there. I have the equipment and all also.

Well, I was not happy with the mono tone color theme with the 120 prior, so I removed the weeds and the wood, then decided on this hardscape so far: 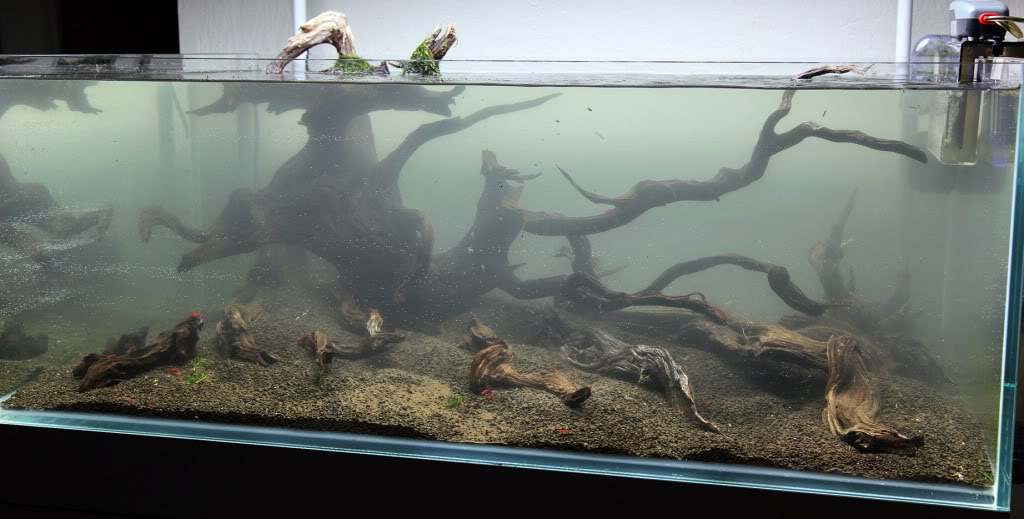 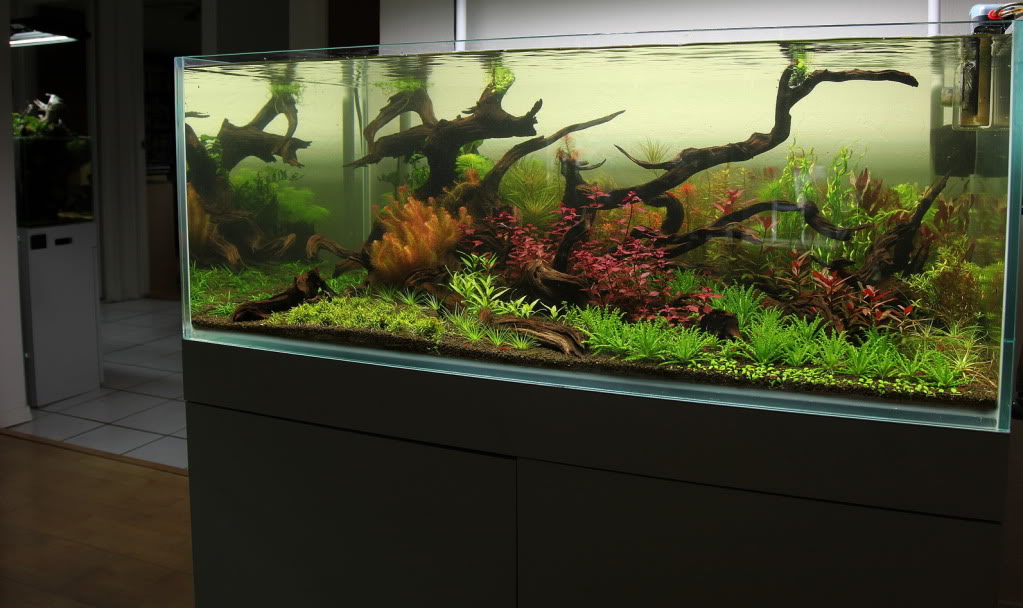 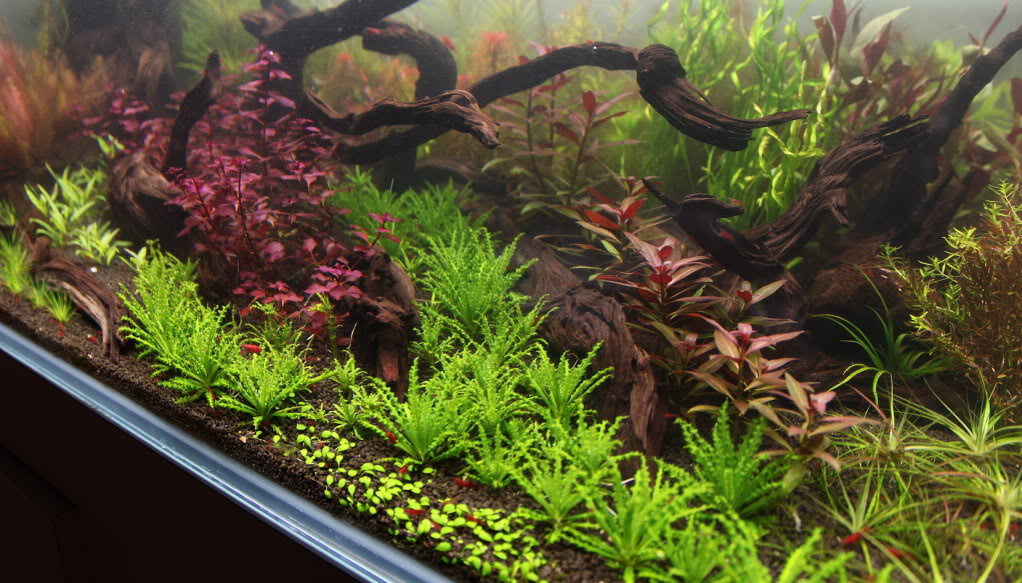 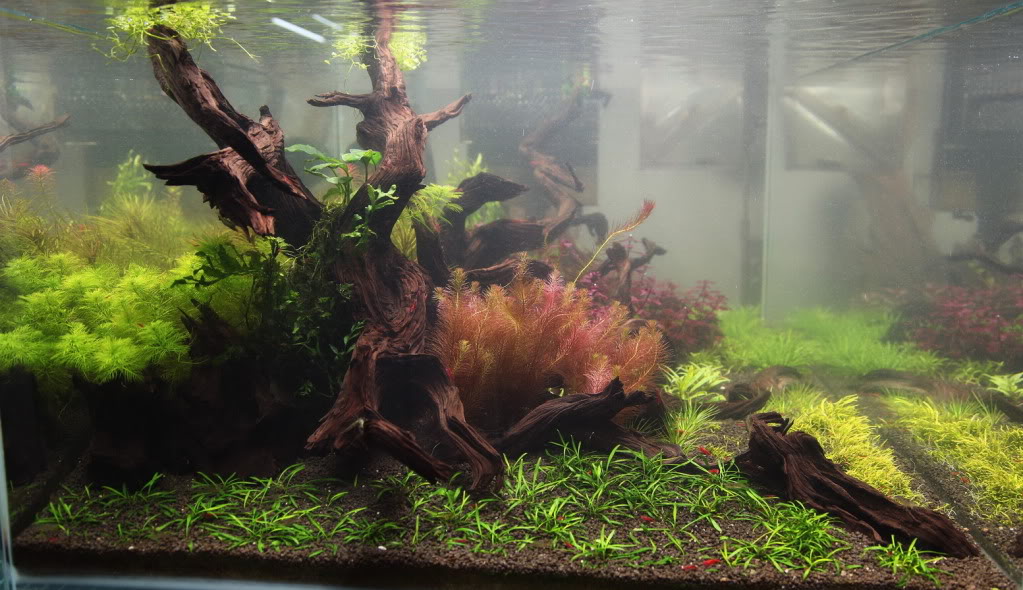 Hi Tom
Your on another winner

it looks rather regimented...but I love it.
Great pictures also....... and look at that wood guys

superb.
Excellent choice of plants to top it off.
hoggie

i like the streets between the wood, and it is refreshing to see some colour for a change!
A

Looks really really good, love the style of this. Congrats!!!!!

I like that look, I think it will great after a few weeks growth.
APS 90 Litre

I like that look, I think it will great after a few weeks growth.
APS 90 Litre

Now that is some excellent roots hardscaping
Meander, Titans, Molten, Sea of Ferns, Pico tbc
Experimentation is the key to growth - Pardeep

I love this so far, especially the wood selection. Can't wait to see it in another few weeks
1400 litre chocolate lake
Lava Negro
A 'little' box of chocolates
A Chocolate Puddle
Mini Nano
My 5ft jungle
Diy inline reactor for FX5

Yes, I suppose the wood is inspiration and it was natural concept but the hardscape was secondary really here.
The color factor was the primary goal.

Then making the plots of the plants bordered with the wood, this keeps things tidy(well, tindy-er).

Another technique is to simply take each of the roots and moss em.....wrap them in Fissidens or Flame moss , or a liverwort etc. These smaller blade/thalli plants have very different color than most stems and finer textures. Moss is often wedged in between the foreground plants and hardscape to soften it and provide more depth to the midground area.

Looks great, as said that wood is superb and colours ... striking.

L_Plates said:
Looks great, as said that wood is superb and colours ... striking.

Fine line between "gaudy" and "striking" some might suggest

looking nice Tom, what lighting have you got over out of interest?
life is like a pot of HC
P

ianho said:
looking nice Tom, what lighting have you got over out of interest?
Click to expand...

4x 54W T 5's Tek fixture, 3 powerchromes and an aquaflora Gieseman bulbs. Par is about 50 at the sediment.

This is gonna be a real cracker!
P 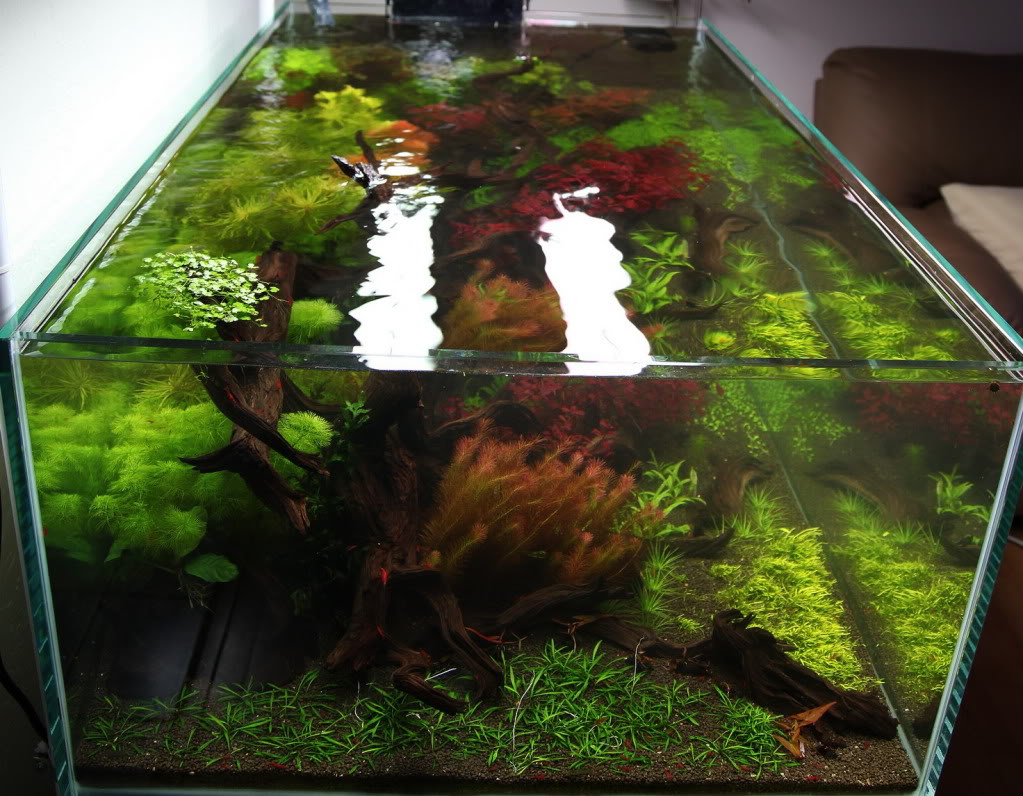 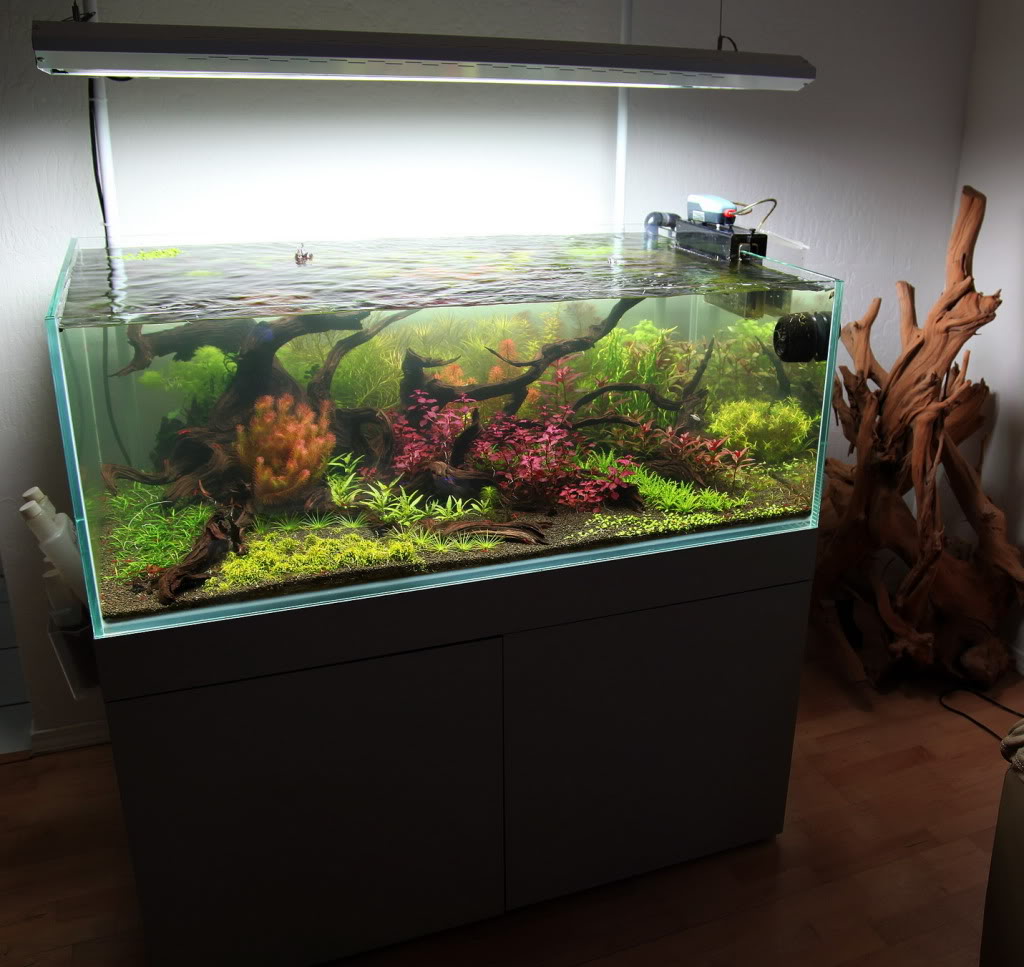 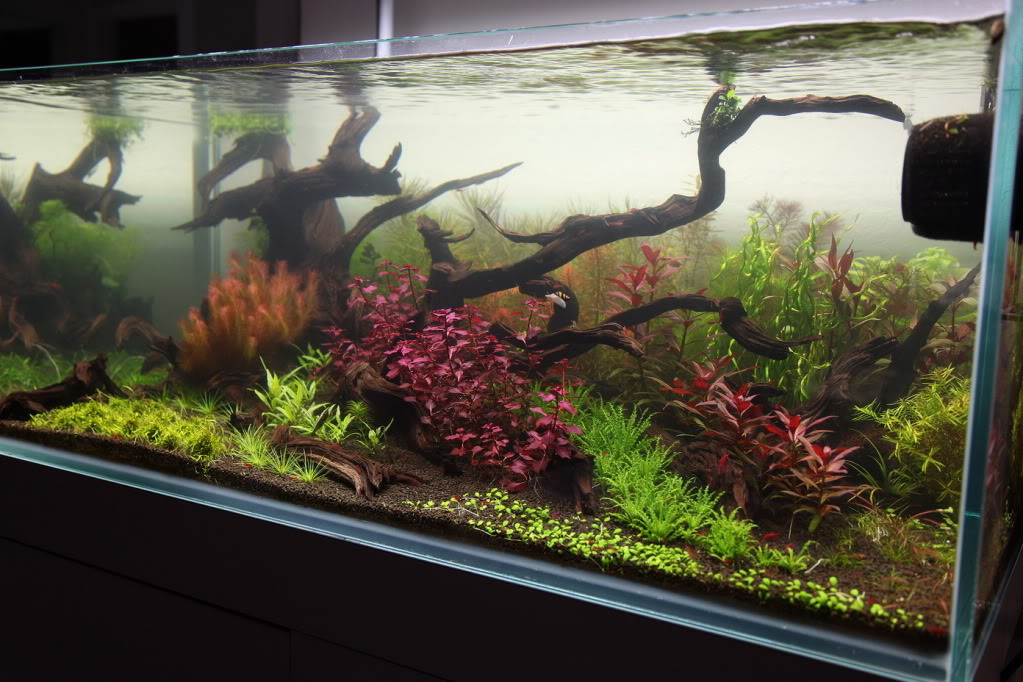