any updates on this ED?

Nick16 said:
any updates on this ED?
Click to expand...

It's all done now! I didn't take any photos while doing the rescape as I was rather pushed for time so probably not worth me starting a new journal but as it's still in my Rio I suppose I can carry on with this one!

They're rather bad photos as I've just got a little automatic here at the moment. I'll take some better ones next week. 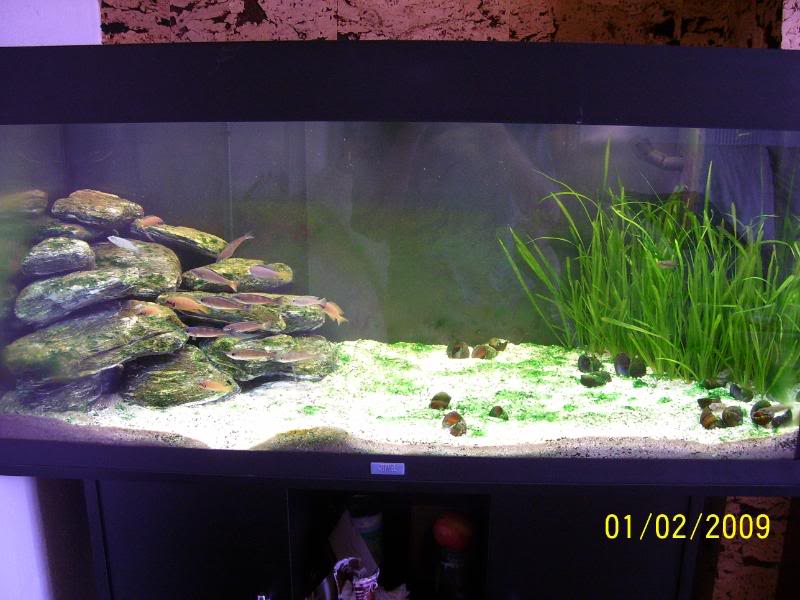 The rock in the corner is Angel Rock from CED in Langley Mill. It's a metamorphic schist with stripes of dark mudstone and narrower bands of white limestone. With the algae growth over the top I really like the look of it. I've used 43kilos of rock - anyone want to guess how much it cost?

The sand is a real mix job. I've recycled the old sand from the Rio with the Tetra Complete mixed in with it and some small bits of Aquasoil still in there (I sieved out all the large pieces to re-use in the future). Then I added some new BD Aquarium Sand (I prefer this to playsand as I don't find it as fine and have never had a problem with it going anoxic) and a bag of coral sand and small coral gravel. This means I have a nice mix of sizes, textures and colours and it provides some nutrients for the plants and buffering for the water. If I have to add more I'll get some darker coarse sand to mix into it as well.

Finally I've a load of straight vallis to hide the filter. I bought two batches of this as the first lot I bought from an MA near me the numpty sales boy gave me two pots of Cyperus instead! As I had a mates kid with me at the time I didn't notice until I got home! Needless to say it isn't thriving! Fortunately I bought 3 more clumps at another store and the vallis is already starting to spread well. I will keep it restricted to this corner once it gets going.

Next the stock.
I have 6 Neolamprologus meeli 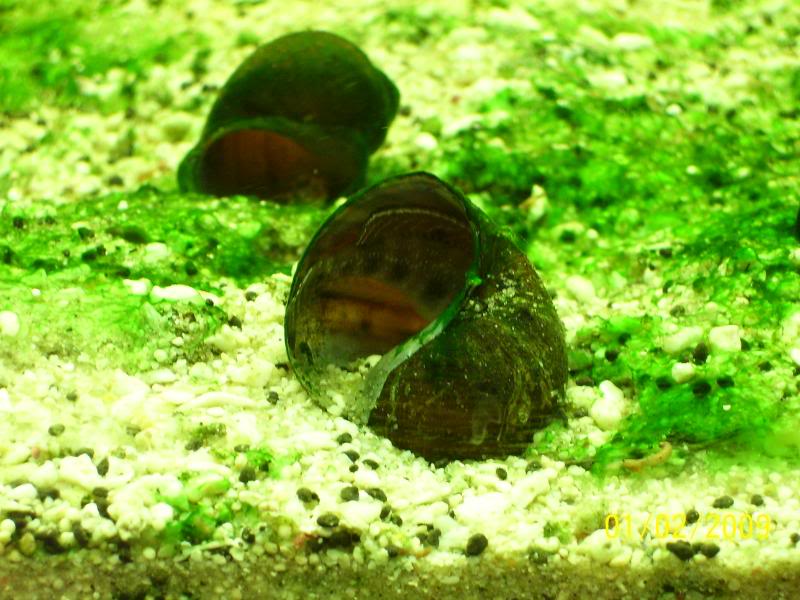 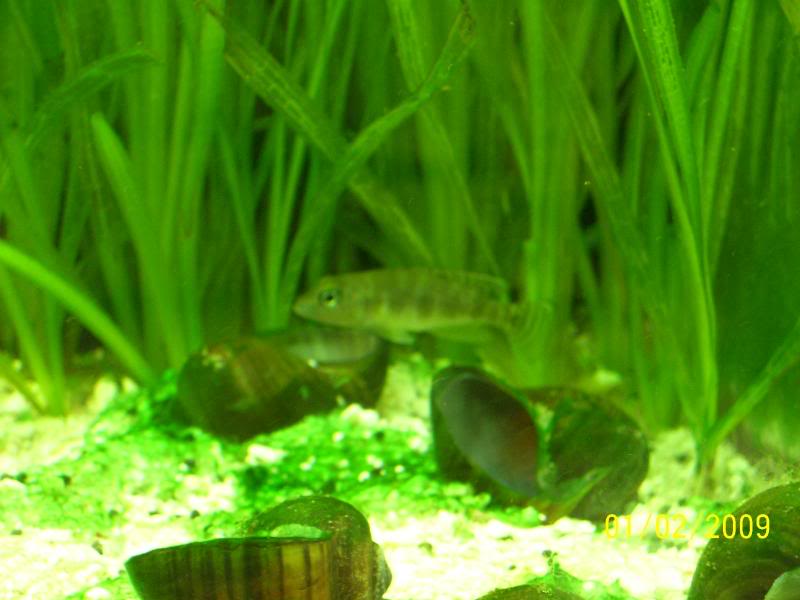 I originally was worried I might have 4 or 5 males and only one or two females but it now seems I've got at least 3 females and probably 4 and only two males. Thye are more aggressive than the other shell-dwellers I've kept but they've settled down so far and are no match for the N.helianthus. However they still have a lot of growing left to do so I may have to remove the other male and the two subdominant females soon.

The yellow fish you can see below is Neolamprologus helianthus. These are part of the 'brichardi' complex (though brichardi is now part of N.pulcher after a DNA study showed they were all the same species). In fact N.helianthus may well be part of N.splendens which is identical apart from the yellow base colour. 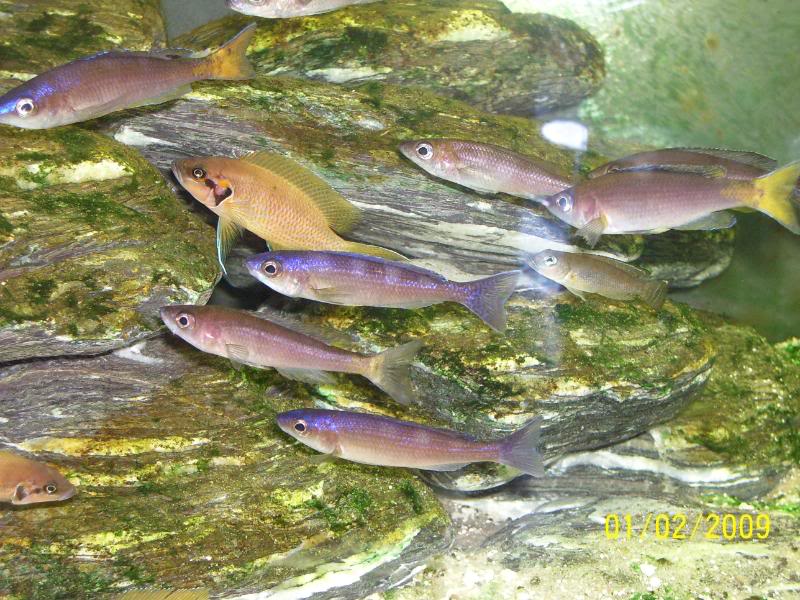 I have 6 of these that will hopefully form one pair. I will then almost certainly have to remove the other 4 if I can catch them in time. At the moment there's a bit of chasing and fin-nipping but nothing too bad. However it can go from this to dead bodies without you noticing a change so all I can do is wait and see. I have a spare tank ready in case I need it. The big fish pictured above is the largest and almost certainly a male and he seems to be getting on well with the next biggest fish which I think must be a female so I've got my fingers crossed. 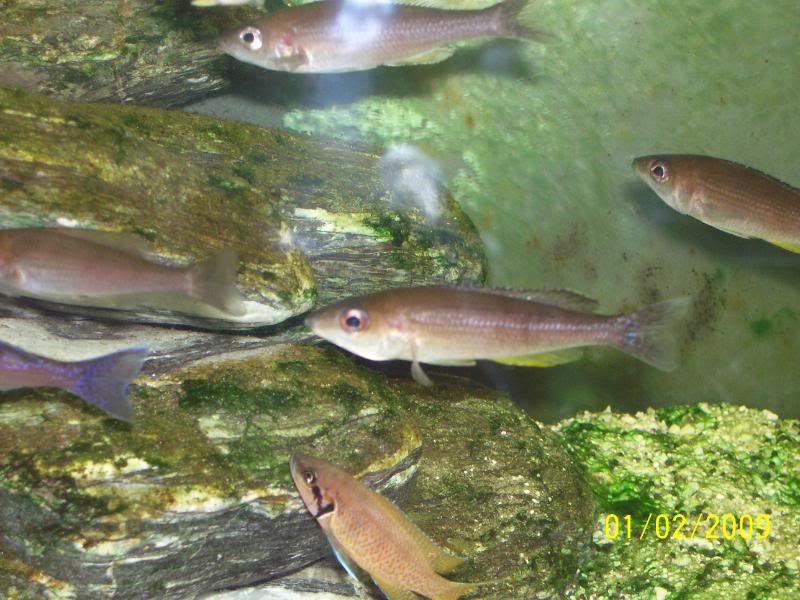 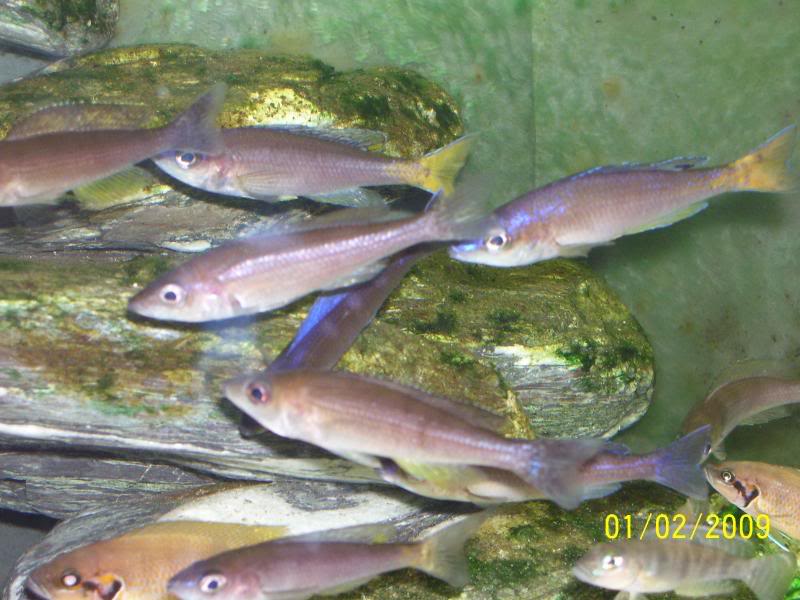 As I said, not the best photos. I have 5 males and 4 females but I'm a bit unsure that they are the form I was sold them as. In fact I may have two different species here or a mix of locations but only time will tell as they grow and continue to colour up.
Ed
B