Hi
I need some help. I've just gone from low tech to CO2 injection in the the last few weeks. On my low tech 200L I was dosing TNC complete and it was great.

I've now upgraded to 300L with CO2. I'm seeing a bit of die back which I was expecting with the tank move, not much growth other wise but I'm still trying to get my CO2 right aswel.

I've just started looking at EI dosing but for my new tank according to a calculator this would be 75ml 2-4 times a week for TNC complete. That's 300ml a week of the higher amount! How can I make this cheaper to do, I've been reading and just getting myself confused with all the different information.

Aquatic Plants Fertiliser | Aqua Plants Care has all the chemicals you will need, for the macros you will need KNO3, KH2PO4 and MgSO4x7H2O and some CSM+B Trace for the micros.

Thanks. I'll take a look at that. So I would then need to use the calculator to work out how much of each I need and mix in a bottle?
S

I see the trace elements include copper, can I use a trace without copper as I have shrimp?

Sacul said:
can I use a trace without copper as I have shrimp?
Click to expand...

Much depends on which shrimp you have, Red Cherry Shrimp (RCS) are pretty bullet proof as far as shrimp go if you have them, My RCS have trived using traces with Cu in.
The trace which @Nick potts surgested has 50%less Cu than TNC complete for same target dose of Fe (ignore Volumes in pics as irrelevant, first pic is a clone of TNC using Trace Nick mentioned )

However if your EI dosing you will be aiming for about 0.5ppm Fe

which will yield about 0.006ppm Cu added per week - not sure what safe level is for shrimp you have - for some shrimp lower/none is better.
IFC Aquarium Fertilizer Calculator
Journal - Olympus 500L is Calling, Journal - Pot Scape 50l
"God is in the details." -Mies van der Rohe : "Do or do not, there is no try."-Yoda

I have used many different brands of ferts as well as DIY and never checked Cu levels, and I keep lots of shrimp, both cherries and crystals.

Copper and shrimp: Myth vs Truth !!! it mention 4ppm Cu as upper limit ?
IFC Aquarium Fertilizer Calculator
Journal - Olympus 500L is Calling, Journal - Pot Scape 50l
"God is in the details." -Mies van der Rohe : "Do or do not, there is no try."-Yoda
S

I have cherry's and bamboo shrimp. If that's the case I'll go ahead with it. I never had any problems with TNC and had both bamboos and cherry's in the 200L. I'll get that all ordered and have a decent supply of ferts. Starting to get there now

That is definitely not right in all cases.

Toxicity of Cu is highly dependent on water hardness, you can find thorough scientific papers about it if you look, it has been studied extensively for aquaculture.
I checked my notes and for my tap water of about 3 gh & kh the relevant values were
"No Observed Effect Concentration (48 hours) is 0.008 ppm CuSO4 for rainbow trout"
aka 0.002 ppm Cu
Ill see if I can find the papers my notes are referencing.

Shrimp will probably be more sensitive than fish

[Edit] Found an old thread of mine about Copper, the paper referenced was this one
Unchelated copper will be more toxic than chelated, I will look further for data on chelated copper tomorrow
Last edited: 8 May 2022
.
My journal:
Consistency Deficiency

Ill ping @Simon Cole here as well, im starting to believe he knows just about everything
.
My journal:
Consistency Deficiency

Hufsa said:
Toxicity of Cu is highly dependent on water hardness, you can find thorough scientific papers about it if you look, it has been studied extensively for aquaculture.
Click to expand...

I have several scientific papers investigating copper toxicity on aquatic organisms - including fish and shrimp. I'll dig them out tomorrow. I also seem to recall that it's not so much GH that has a bearing on toxicity but alkalinity/KH. I'll be back.

I found Caridina sp. LC10 (48hr)= 0.5327 to 0.0447 ppm "acid digested copper" from a completely dubious and unreliable source... Ignore completely.
And back to the 1970s we have this for Caridina sp. LC50 (48hr) = 0.281 ppm copper sulphate... Let's do the time warp again.
Which one hobbyist/blogger/breeder felt wasn't "dangerous" ...Consider what a lethal concentration represents over time.

For the freshwater Whisker shrimp Macrobrachium lamarrei (same taxonomic order as Caridina) two researchers in the 1980s published LC25 (48hr) = 0.225 and LC25 (96hr) = 0.211 ppm copper sulphate... Back to the future.
For the Giant river prawn Macrobrachium rosenbergii this study in 2013 published LC50 (96 hr) = 0.35 ppm copper sulphate, with a detailed discussion of survivability.

NB, Copper(II) sulphate molecular mass 159.609 g/mol, copper Cu(I) molecular mass: 63.545 g/mol, yield of copper ions = 25.59% lower than copper sulphate? so can we reduce the values above somewhat if we assume it was dissociated?
Bioavailable copper might be a bit different to chelated copper, and apparently: "Organic chelators, such as EDTA and dissolved organic matter, complex cupric ions to generally decrease toxicity although increased toxicity is sometimes observed".

Apparently gastropods are more tolerant to copper and can accumulate quite high concentrations without toxic effects. Well who knew... I'll take that with a sprinkling of salt.

Gammarus are sometimes "model" organisms. Gammarus pseudolimnaeus hatched and grew to adult stage in total copper concentrations below 0.0046 ppm according to this publication, but we know that they are very sensitive, except possibly in Darrel's tanks. The newly hatched Gammarus were markedly reduced when total copper concentrations were between 0.0129 and 0.0062 ppm. It could depend upon whether they ingest it too.
The no observed adverse effect level (NOAEL) would be far nicer to know that the LC50 or LC25 (48hr). Anybody got shrimp to sacrifice in the name of progress.

My guess is that if EI appears to allow most Gammarus to hatch and grow, then it would be fairly suitable nutrient dosing, but I could not access that study (above) to see the survival distribution.

My feeling is that you can go ahead with this dosing plan, but also be aware of your water source chemistry (supplier quality reports).
It was mentioned more than once in the literature that copper pipework (especially when it corrodes) and hot water cylinders increase the ionic copper concentration, so I might revise my position here, and people could factor that in if they were super concerned. It might not matter that much if water conditioners work as advertised and remove copper anyway, but if you started breeding Gammarus then it might matter.
Last edited: 10 May 2022
S

Here is my water report I managed to get, it has min, mean and max. Assuming I take mean as a measurement it says 0 copper. But the max measurement is a big increase at 0.0191.

@Sacul - Looking at it, I wouldn't believe the data because it all looks a bit odd.

Simon Cole said:
@Sacul - Looking at it, I wouldn't believe the data because it all looks a bit odd.
Click to expand...

This is the data we have on the products in the IFC calculator
I have included the Fe ppm and the Cu ppm for each product, plus added a Fe:Cu ratio purely to help highlight which will give the lower [CU] when you targeting specific [Fe]. Higher the ratio the lower the [Cu] for any given [Fe]. As just looking at the [Cu] per advise dose would be wrong as we tend to target the [Fe] and its resultant [Cu] we would be interested in. 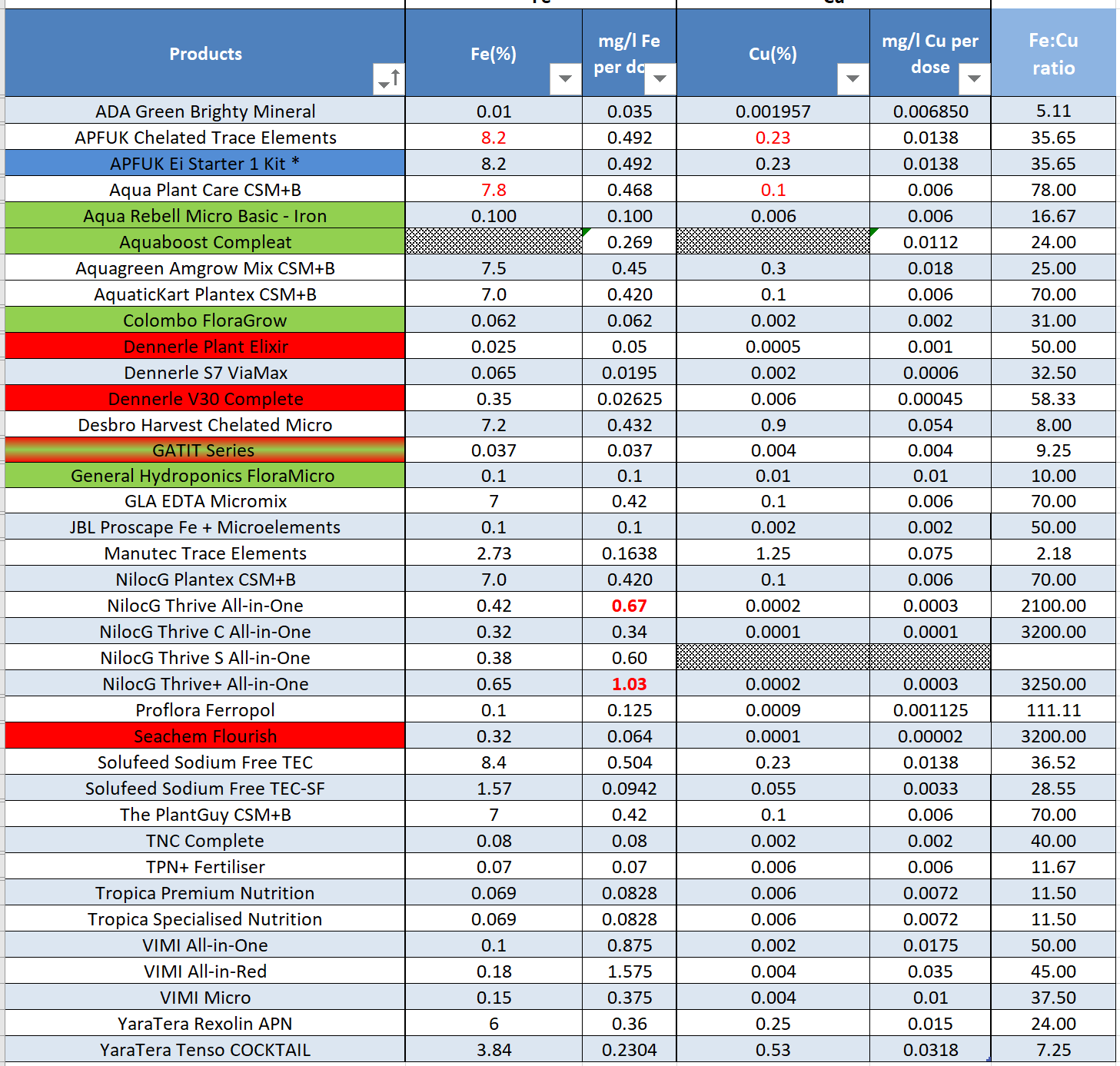 Obviously if your copying a regime or cloning a commercial fert its your choice of trace salt that will make all the difference.
IFC Aquarium Fertilizer Calculator
Journal - Olympus 500L is Calling, Journal - Pot Scape 50l
"God is in the details." -Mies van der Rohe : "Do or do not, there is no try."-Yoda
S

I've been looking on the IFC calculator and I'm trying to match EI dosing mid (without the added calcium as I'm not sure if I need it) as I'm not heavily planted but I would think it's more than low dosing. Once everything has grown more then I'll switch to high. Unless I'm going about this completely wrong. So Fe 0.4 would be Cu 0.005 unless like you say I change the trace salt

These reports are the absolute minimum that they can get away with legally and, as you say, are incredibly shoddily presented.

In this case the "min", "mean" & "max" values are all actually zero. When you are below the detection limit for a particular analytical test, quite often you will get a random value, it is just the "noise", for whatever reason they presented the minimum value as the "noise" value, even though it is totally meaningless. When they've given the mean value they've ignored the "noise" and reported a zero value.

Because the nitrate value is pretty low I'm going to guess it is soft water from a Bodmin etc Moor reservoir. @Sacul somewhere there should be some values for conductivity, hardness etc.?

Sacul said:
I've been looking on the IFC calculator and I'm trying to match EI dosing mid (without the added calcium as I'm not sure if I need it)
Click to expand...

Just say 'no' to cloning and enter the ppms direct, it works exactly the same

Correct.
It would also be less if you used more than one trace salt

As the target [Fe] will be shared/ratio as you choose
IFC Aquarium Fertilizer Calculator
Journal - Olympus 500L is Calling, Journal - Pot Scape 50l
"God is in the details." -Mies van der Rohe : "Do or do not, there is no try."-Yoda
S

dw1305 said:
somewhere there should be some values for conductivity, hardness etc.?
Click to expand...

There is indeed and you are correct it is soft water. I've added the attachment so you can see

still trying to get my head around dry fert amounts.

Any TNC complete users out there, help with dosing please