Yeah, I really hope you dont do fish-in cycling. Its outdated and inhumane
.
My journal:
Consistency Deficiency

Hufsa said:
Yeah, I really hope you dont do fish-in cycling. Its outdated and inhumane
Click to expand...

Nice looking scape alone with plenty of good advice. Good luck at the start of your venture.

Cris_thorn said:
Nice looking scape alone with plenty of good advice. Good luck at the start of your venture.
Click to expand...

Thanks @Cris_thorn. Just seen your profile photo, I've got a Border too! Love him to bits
E

You have said ‘no CO2, yet’. What needs to happen for you to install CO2?

Ehcosbie said:
You have said ‘no CO2, yet’. What needs to happen for you to install CO2?
Click to expand...

The realisation that my plants don't look as vibrant as I want them too after x amount of time and money!
A

Smackbat said:
The realisation that my plants don't look as vibrant as I want them too after x amount of time and money!
Click to expand...

If you pick a suitable selection of plants, they can look vibrant with proper lighting, fertilization, and without injected CO2. For some inspiration, check for example the recent videos of MD Fish Tanks in youtube. If your goal is to have faster plant growth and specific plants (such as dense carpet plants) then you need to consider CO2. If not you will be throwing money away buying and trying to keep plants that will struggle in a low tech setup (like the HC Cuba). But it will always be more expensive to add CO2 injection to this tank than to keep it without CO2 because of the extra equipment and running costs (which are not insignificant).

I'm wondering about surface plants (Salvinia in my case) and water surface agitation (which I understand is a good thing?). My plants are being thrown about the surface of the tank, doing cartwheels under water, and I'm wondering if this is bad for them? If so am I better of with little surface agitation to protect the plants? Or is there some way of achieving both?!

Yeah they don't like that much. Can you cordon off a calm section of the surface using airline tubing and some suction cups?
.
My journal:
Consistency Deficiency

Smackbat said:
Seen so much on fish in cycles and have read up on how to do them. .......... Happy to be told otherwise though
Click to expand...

What @Siege says, just let the plants grow in. Have a look at the <"Seasoned tank time"> concept, basically a "seasoned tank" is what you want before you add any fish.

Because the <"traditional premise for cycling"> has been found to be incorrect, you don't need to use the "sacrificial fish" or added ammonia ("fishless cycling") methods, you just <"need to let the plants grow in">.

If you look at @Natthanon <"Echinodorus root growth">, it shows partially why time is so important in <"creating stable and resilient"> tanks.

Hufsa said:
Yeah they don't like that much. Can you cordon off a calm section of the surface using airline tubing and some suction cups?
Click to expand...

Worked a treat, thanks!

Smackbat said:
Thanks @Cris_thorn. Just seen your profile photo, I've got a Border too! Love him to bits
Click to expand...

He's the youngest. We have 2. Old girl who is 15year old and he is 4 year old. Great dogs with a great personality.

So my Microsorum Narrow Leaf doesn't look too healthy in places, some blackening tips, curled up leafs, and white areas. They are in the spots directly under the light so I'm thinking the light is too bright for them. I'm running a Pled510 - 24w, 7500 K, about 180mm from the surface. The leafs towards the front of the tank seem OK so I might move the light more towards the back and see if that helps. 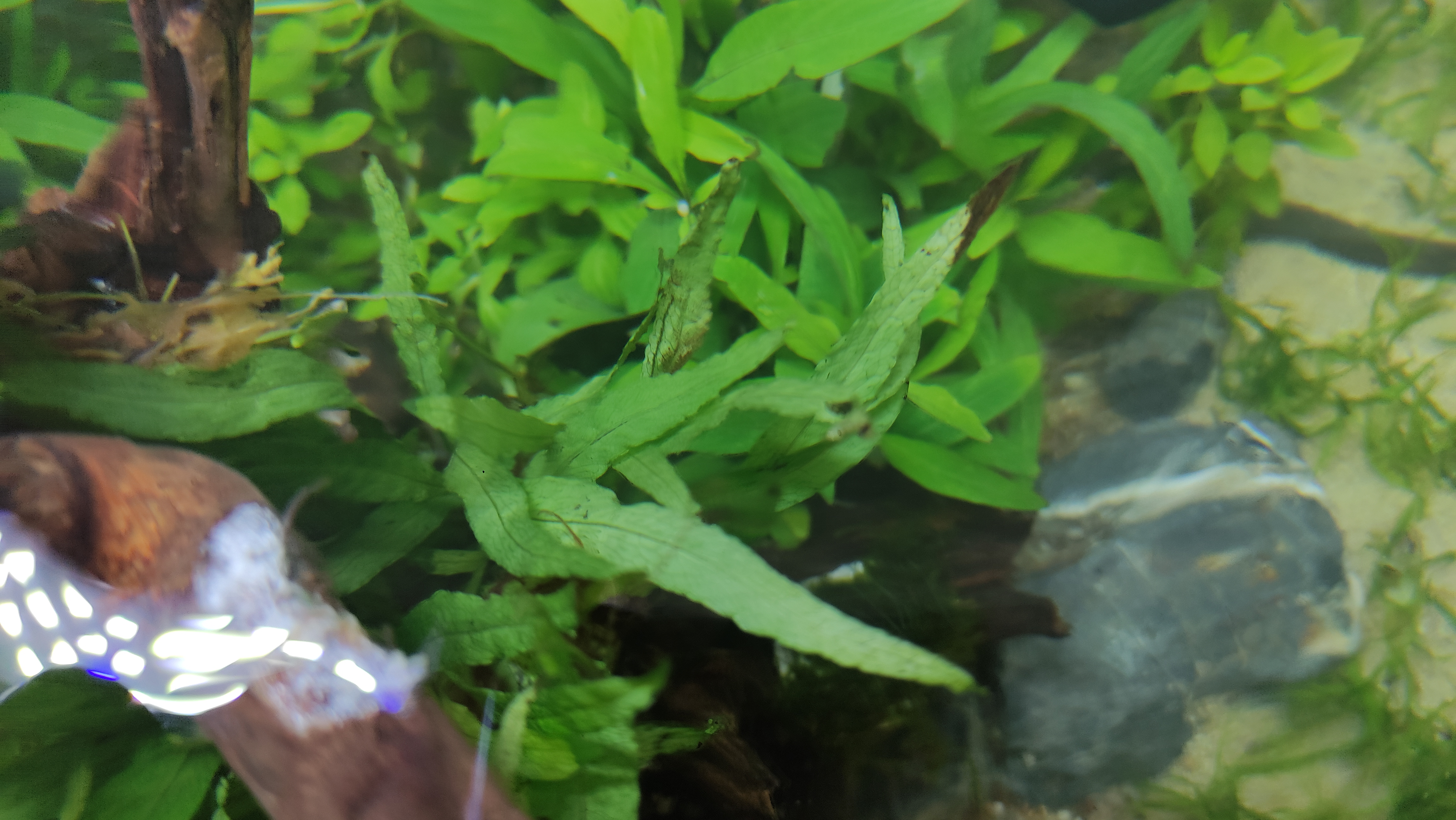 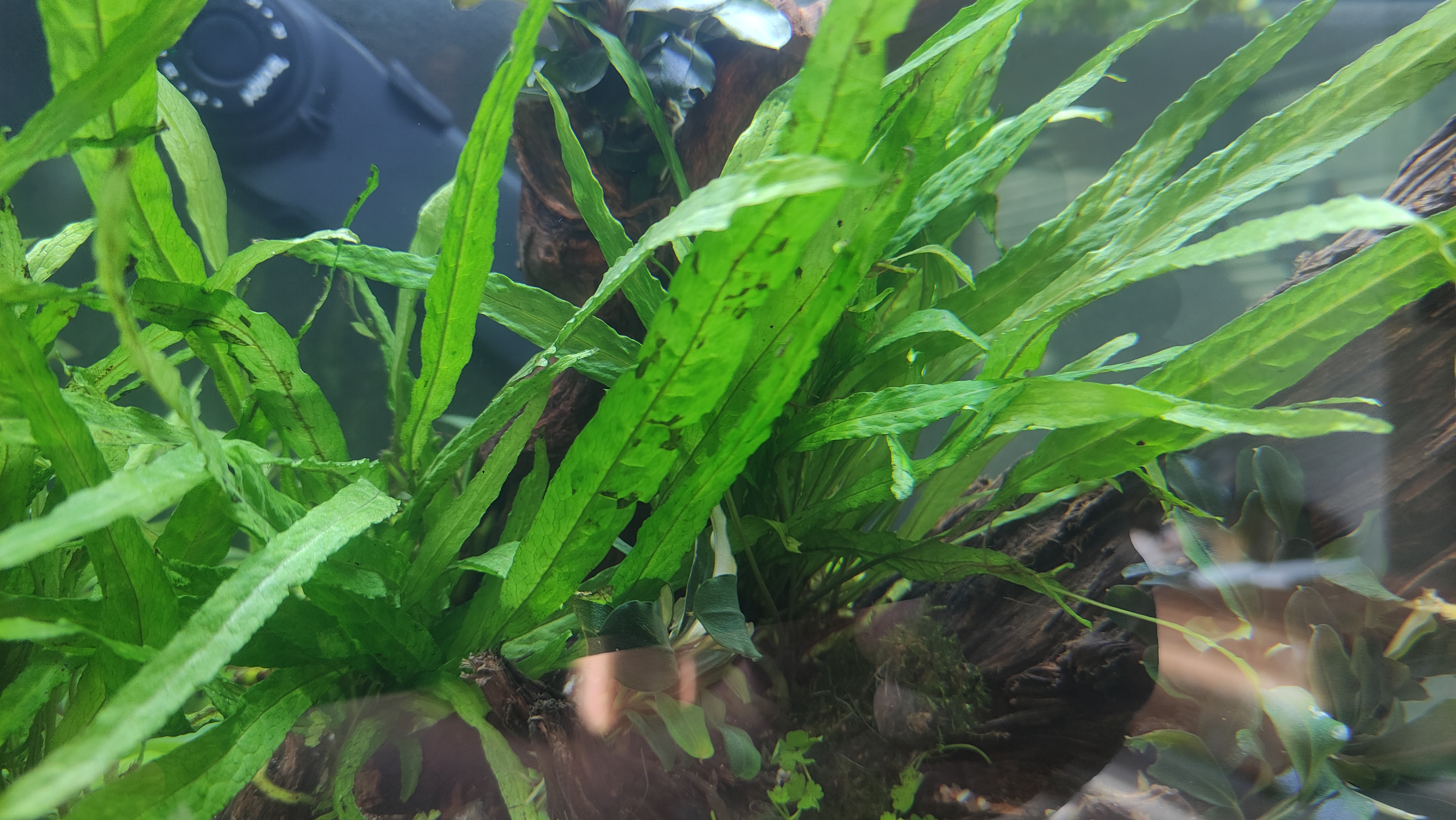 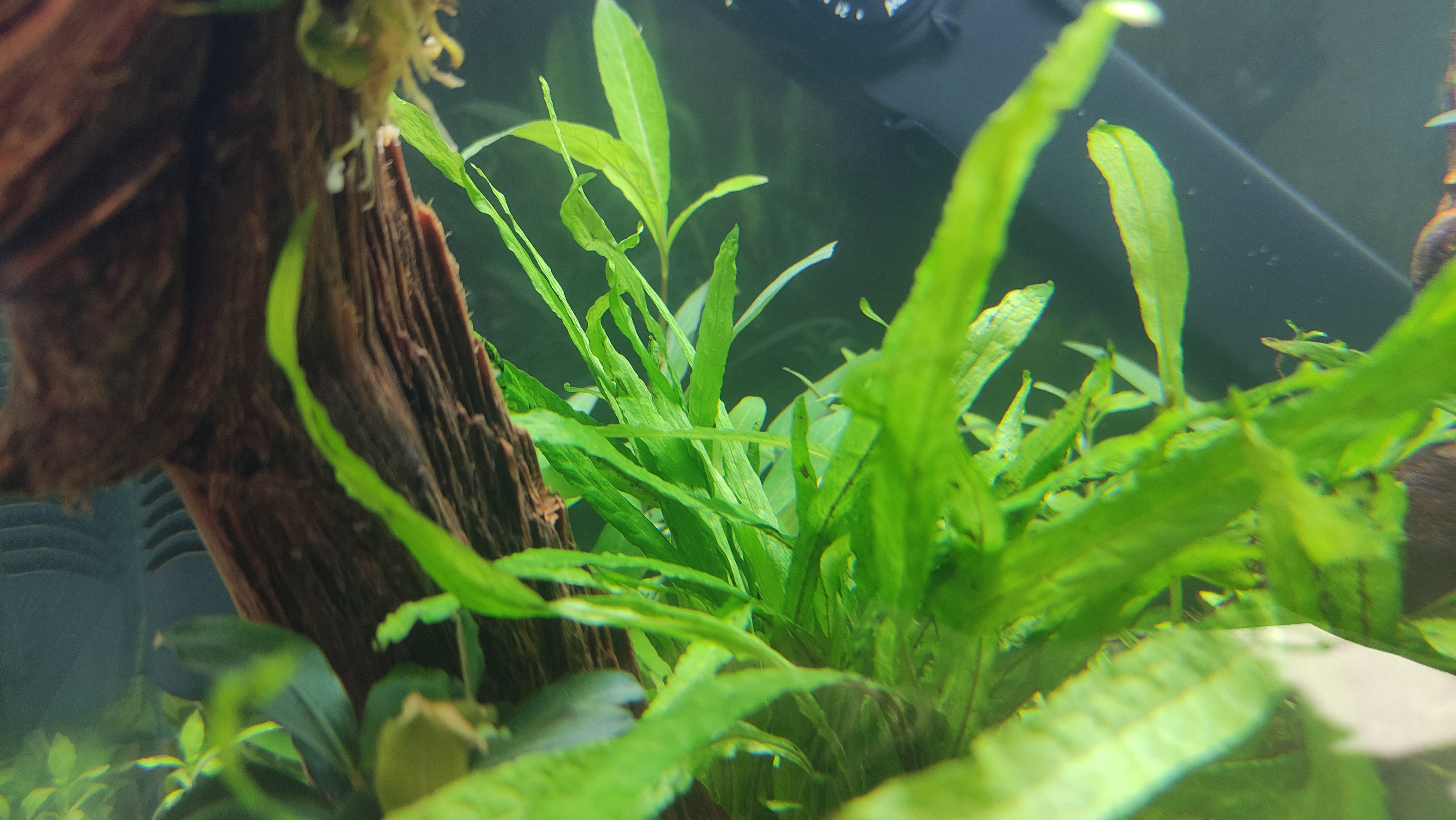 Put some tape over the LED's instead. Mutes the intensity, hopefully they'll be a lot happier and the rest of the tank will be OK? 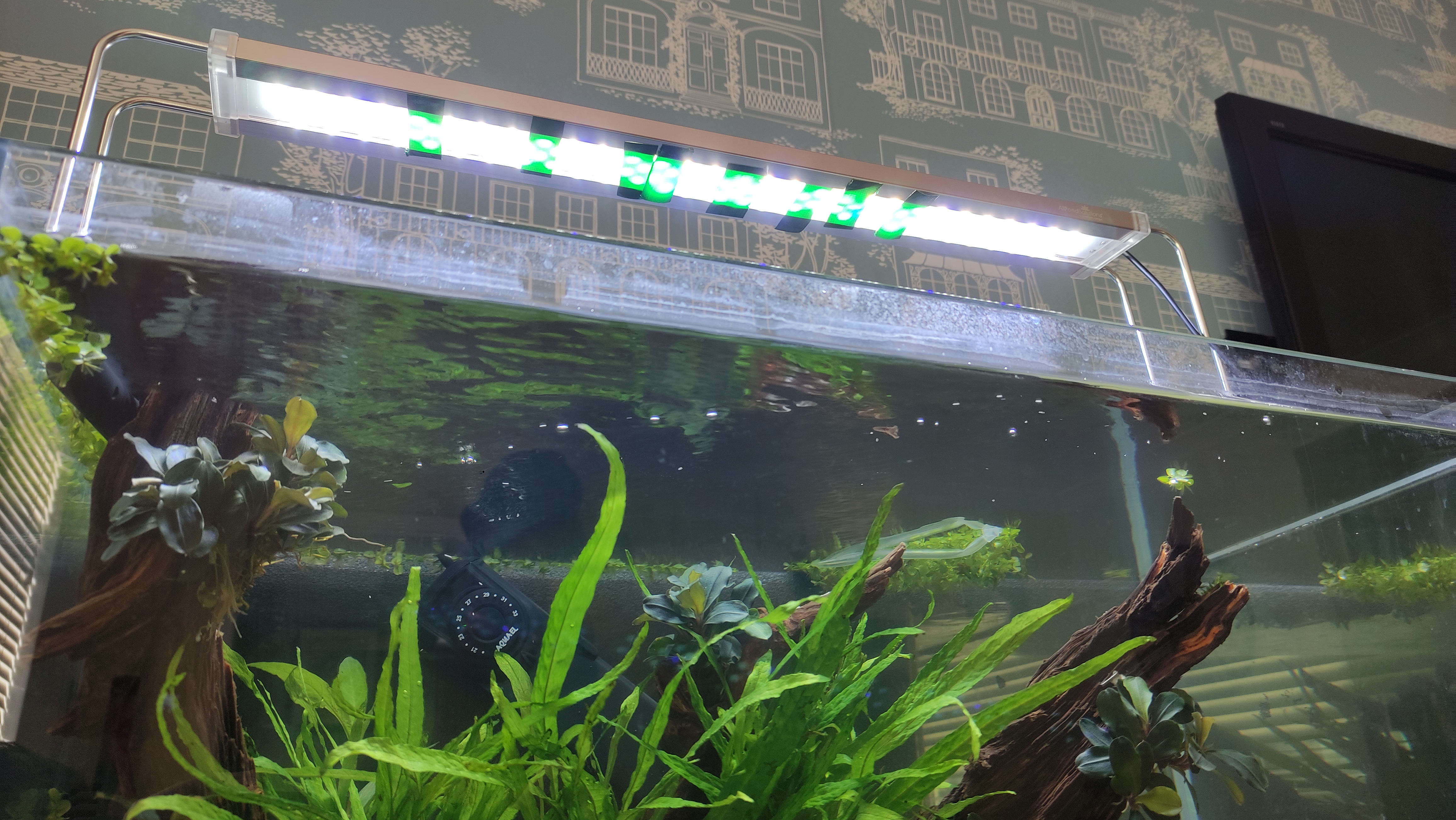 1 week old and everything appears to be going to plan. New growth seen on most plants and the fern appears a lot happier.

Moved the filter to the other end of the tank and this has improved flow around the stem plants at the back but the plants directly underneath appear to have none. I'm thinking I might need to drill a few holes in the spray bar to get movent below?

Moved the Buces down to shader spots and put some Christmas moss in its place up high. 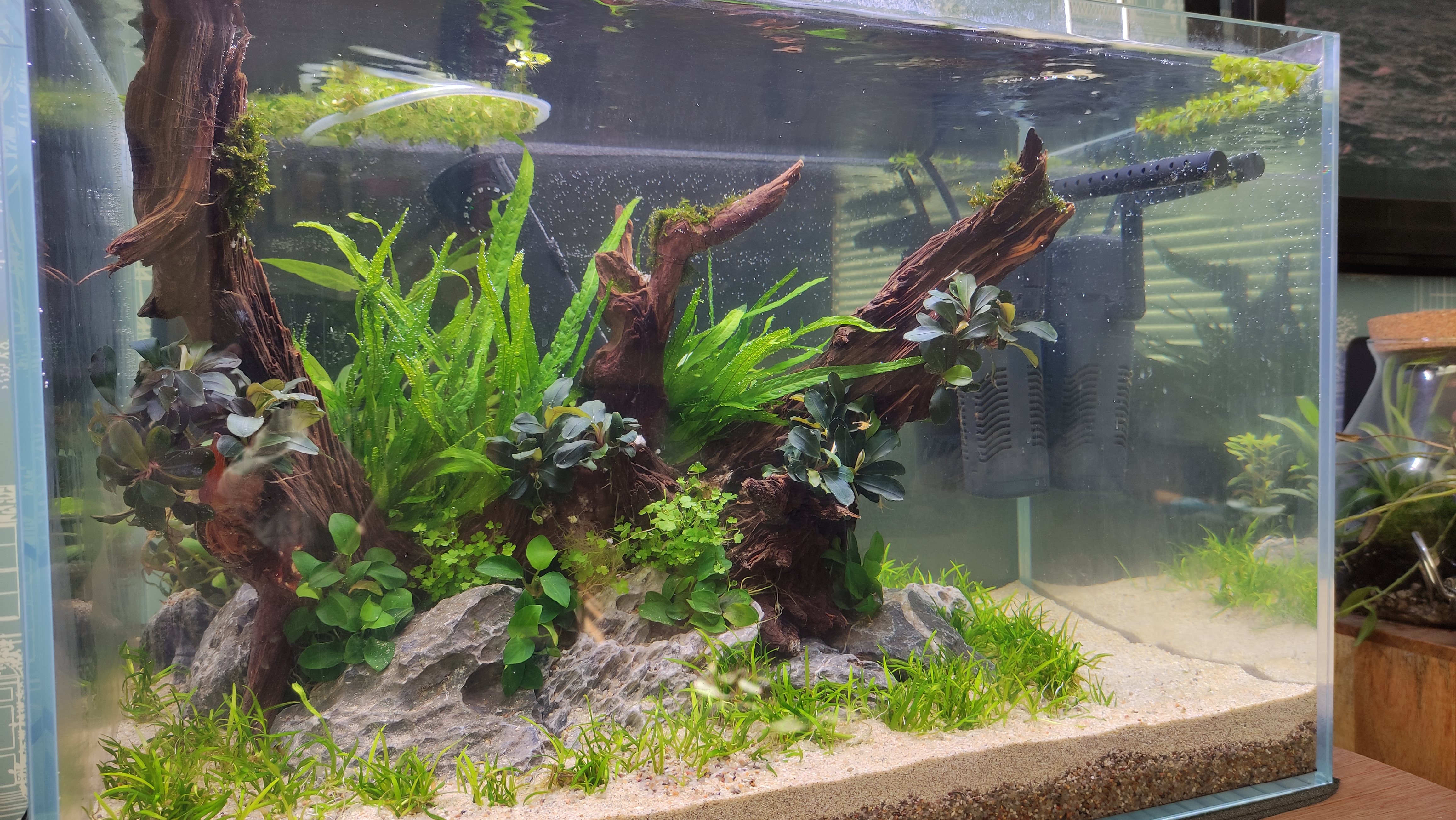 This is pearling, am I correct? I thought a tank had to have CO2 injection for pearling to occur? I did do a 50% water change yesterday but all of the bubbles had disappeared by the time the lights came on this morning. This was taken this afternoon

50% water change due this morning and decided I wanted to do a major clean up. I've not been happy with the flow and I reckoned that the back was far to packed out with plants.

I took out all the stem plants and the ferns. This is when I realised that most of my Limnophila aromatica had melted but there was fresh growth at the top. The roots and the majority of the leaves had turned to mush. Luckily there were new roots growing and fresh green leaves too so I cleaned them up to get rid of all the dying plant matter. I also hoovered up the gravel at the back because it was covered in a slimey substance.

I also noticed that my Anubias Petite had some mushy leaves. On removing them, most of the leaves disintegrated too! So i removed and cleaned them up as best I could but some were just rhizomes by the time they'd been cleaned. Providing this is just melt, and not a disease will the rhizomes grow back? Am I best to remove them entirely and get some new plants?

I replanted the stems and spaced them out a lot better. Felt a lot calmer than the first time of planting them and left space at the back of the tank for better flow.

Cleaned the tank, the filter in some tank water, and also removed half the floating plants as they have multiplied!

I've really struggled with the position of the filter due to the large piece of wood breaking the surface on the left of the tank. Using the spray bar doesn't work so I removed that and managed to get flow across the top, down the left, across the front bottom and back to the filter! First time I've seem plant matter do a full circle of the tank. Also saw flow at the back of the tank which I haven't done before so really happy with that now.

I've not been happy with the lack of colour in the tank so I'm thinking of replacing some of the lost Limnophila aromatica with some Ludwigia Super Red and would like to get some Kedegang too. Any other suggestions?

I'm now dosing 2ml of TNC Complete a day with a 50% water change and 20ml of Tetra Aquasafe every other day.

Once I'm down to 1 water change a week, would it be worth getting a dozen or so shrimp?

I'll take photos when the lights come on.

Smackbat said:
providing this is just melt, and not a disease will the rhizomes grow back?
Click to expand... 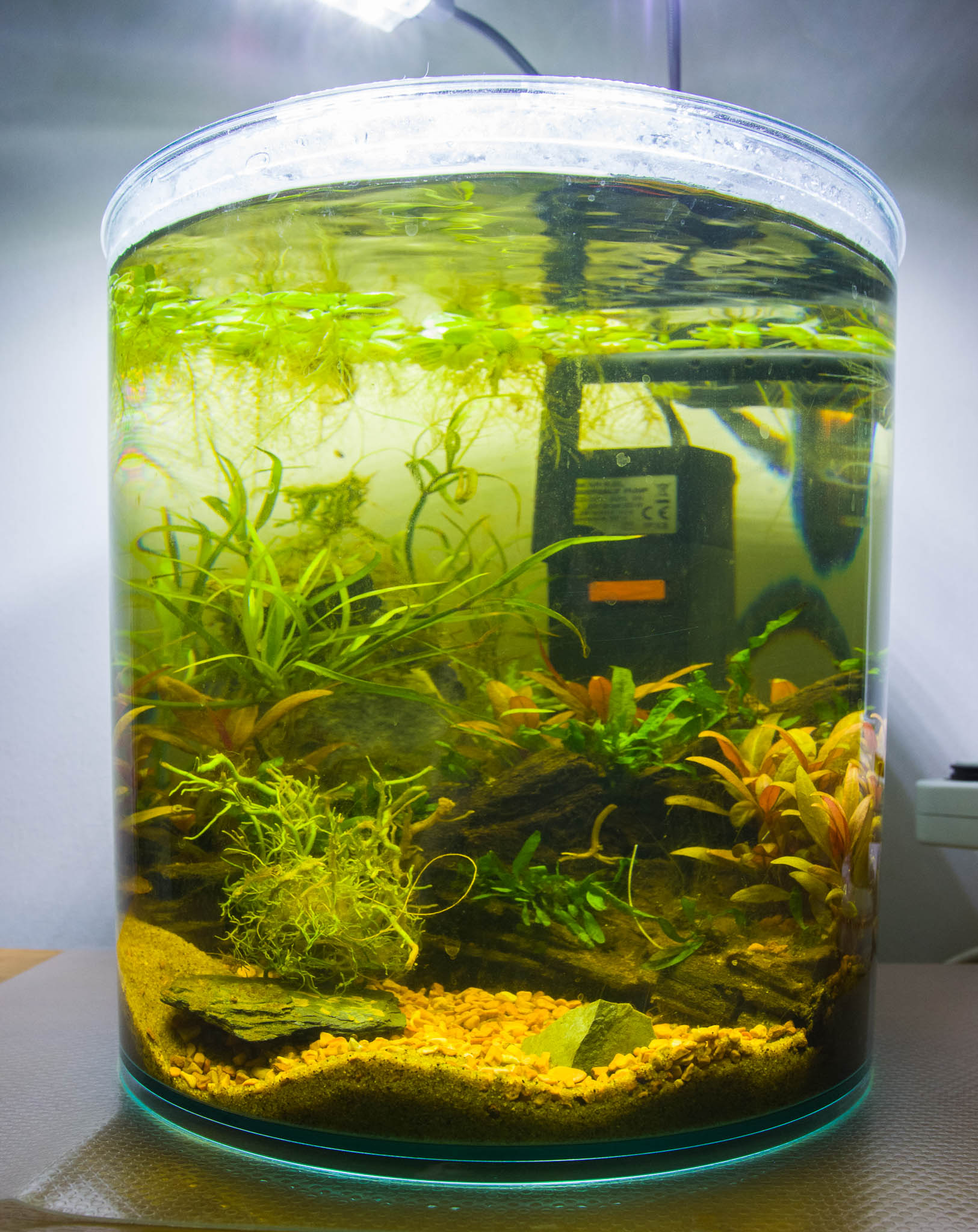 The Rhizome bundle at the bottom left is all that was left of my Anubia Nana after it completely melted away in my first tank in Nov 2020. I left it in this little 12L for six months, and it sprouted. Here it is last May in it's new home (bottom RH corner). Now it's about double that size but I don't have a handy photo. 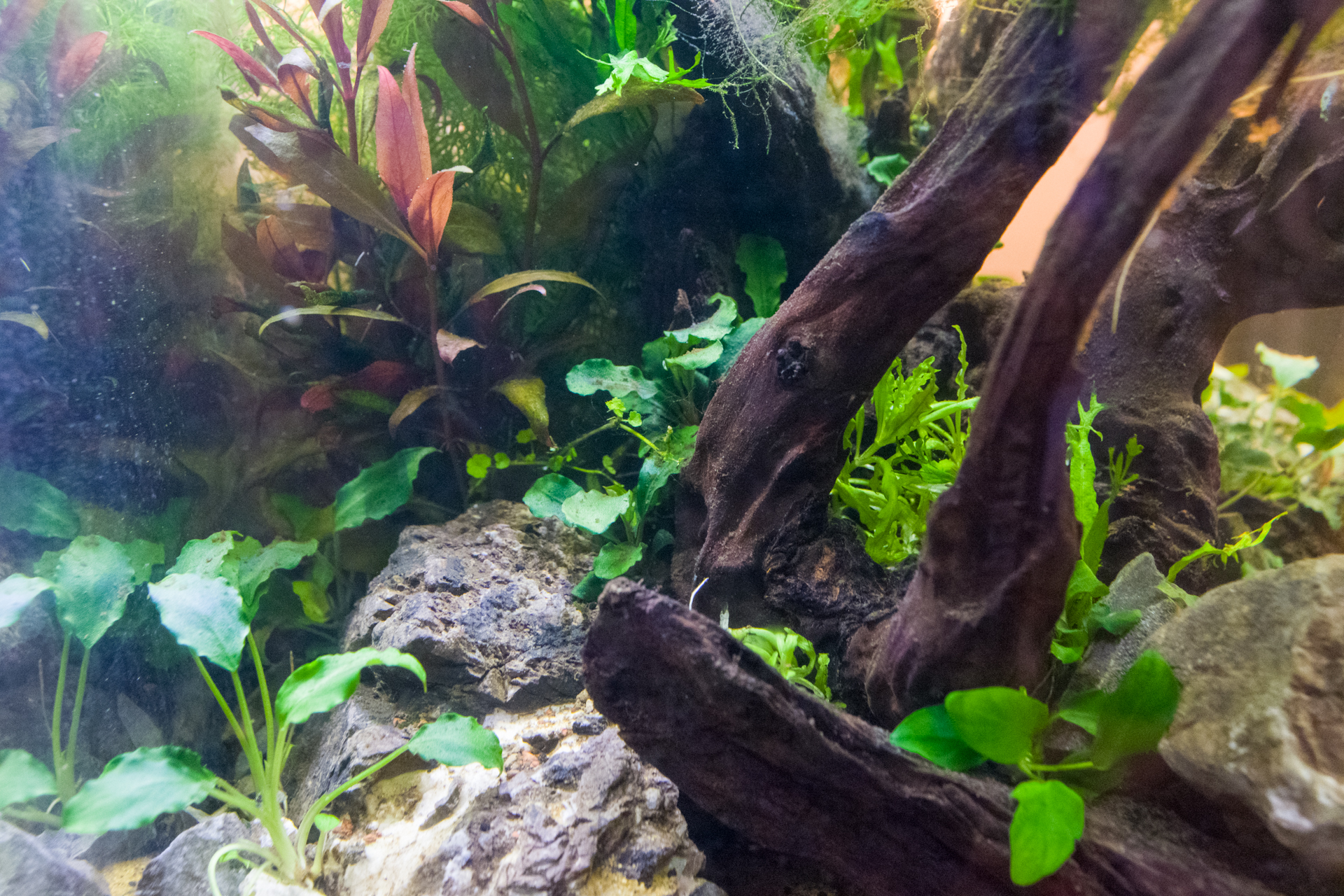 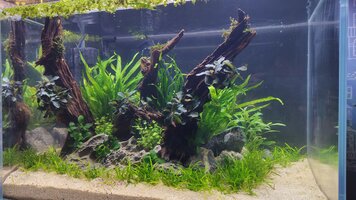 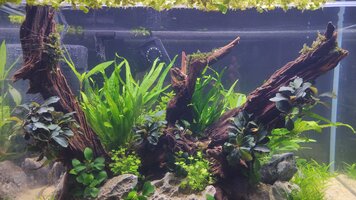 Hi @Smackbat Nice tank! You may want to corral those floating plants (Frogbits) there with some plastic tubing, so they dont end clustering up at the front due to the current - they do not like to be submerged for extended periods of time - they wont mind to swirl around as long they they don't tumble and get submerged. Cut a strip of tubing and attach the ends to make a circle and put the Frogbit inside the circle! ... an added bonus is that it will provide more shade for your plants.

Cheers,
Michael
Last edited: 12 Feb 2022
You must log in or register to reply here.

A reflection - putting it all into one scape
3 4 5