From Reef to Nature Aquarium a journey

I will be doing a video as I go forward.
I have the unboxing video in the works.

Melll said:
You have got some sexy equipment there 😀 following this with interest.
Click to expand...

me too! thanks for sharing your journey.

So in my 30c tank I had hair algae. I tried all the tips on freshwater forums. Water changes, lighting adjustments and watching my feed of fish. No success. So I went with a saltwater fix.
Phosphate is the number one cause of hair algae. Phosphate comes from food and Fish waste.
So I went to my media shelf and picked up my jar of phosban and measured out the amount needed for a 30c.
Within 3 days all the hair algae in the plants where gone. An now on my second month of running all algae are gone even in the glassware in the tank. I had a little but not fully covered before the phosban was placed in the filter. 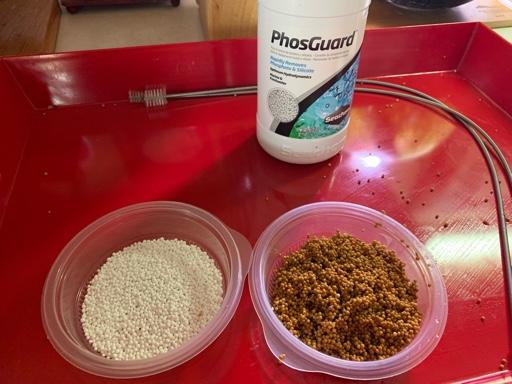 @Ed Wiser you May be interested in this thread.
https://www.ukaps.org/forum/threads/a-fresh-look-at-preventing-algae.61671/

The thread is about ratio between nitrate and phosphate, not about plant growth. Might not be excess phosphate, but too low nitrate - that’s why I suggested dreading that thread.

Ed Wiser said:
So I went to my media shelf and picked up my jar of phosban and measured out the amount needed for a 30c. Within 3 days all the hair algae in the plants where gone. An now on my second month of running all algae are gone even in the glassware in the tank.
Click to expand...

My guess is that the plants will eventually begin to show phosphorus (P) deficiency symptoms.

While phosphorus is one of the "big three" macro nutrients, plants actually need a lot less of it than they do nitrogen (N) or potassium (K).
Phosphorus is highly mobile within the plant, which means the plant can scavenge any spare from the older leaves, as well as from the reserve in the substrate.

Also deficiency symptoms are also nothing like as obvious as they are with N and K, more a slowing of growth and stunting. The interesting thing is the likely time scale for deficiency symptoms to appear, which could potentially be a <”very long time”>, depending on the <”nature and extent of the phosphorus reserve”> in the substrate.

The situation for the algae is slightly different, they don't have any "internal plumbing" so can't access substrate phosphorus etc., and they have a quick turn-over of cells, which means new cell growth is dependent upon PO4--- ions diffusing through the cell wall. If you remove all the PO4--- ions from the water column, then PO4--- becomes <"Liebig's limiting nutrient"> for the algae and the growth "assembly line" stops.

It is the <"iron (Fe) and algal growth issue"> in reverse.

Konrad Michalski said:
After 7-10 days between water changes my glass was spotlessly clean and never had to even wipe it off. After dosing some additional Iron (only about 2ml/day) my glass became green after 4 days. After 7 days I had to scrape it off as it looked disgusting. Now stopped dosing it again and my glass is clean again.
Click to expand...

In the case of Fe it is highly immobile in the plant, so even when iron ions (Fe++(+)) become available it takes some time before the plant can produce new non-iron deficient leaves.

For the algae it is different, iron ions can diffuse straight into the cells, through the cell's walls, and you get an instant growth response. 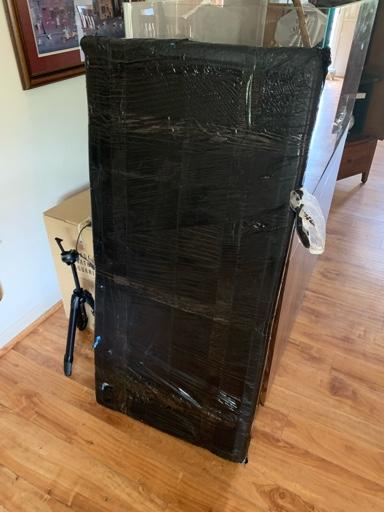 Wahoo just received my Lightbackground from Poland.
Day an a half shipping.

Love their “what we do” blurb on their website:
Mainly - the lightground !

LED illuminated background panel for aquarium. Available in any size with custom gradient foils to make it shine even more. It is powerful as the sun, strong as Arnold Schwarzenegger in Terminator II and beautiful as Sharon Stone in Basic Instinct.

Will be doing a video on the unboxing and set up. That I will post here. 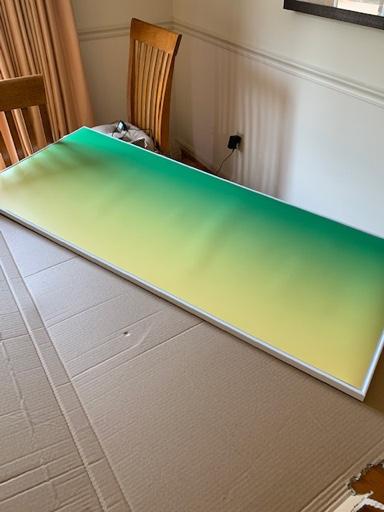 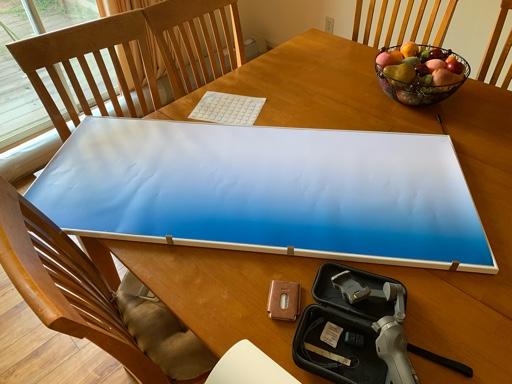 I’ve only see these used in video/photos so not sure what I was expecting ... but certainly no crinkles - though I suspect these won’t be visible when in place (or perhaps just as shading)

Did you end up creating video that’s still coming?
L

Would be interesting to see the colour of the white light w/o the film as well.

I didn’t realise these relied on gradient films for the colour either - I assumed strips of RGB LED’s top and bottom to allow full control of the colours.

The wrinkles are only noticeable when I put them on the lightground. I use small
Adhesive circles used to put the films on the lightground. You never see them when the lightground is on the aquarium.
I have been shooting video of each step from unboxing to setting up.
I have the plants coming in this week so should be more pictures coming along.
It’s been a long build delayed due to family health issues this year. Glad to see the finish line.

I have the same Polish lightground , with 3 films/foils (also the orange/yellow/green one, don't think i"ll be using that, maybe at Christmas) .
The films have a protective (paper)layer, you can pull it of.
Then you have a 'sticky' foil tot put on your lightground.
No wrinkles. Be gently, use a creditcard or something else plastic. Look out for air-bubbles!

does the sheet come with the light panel or do you have to buy them separately ?
Instagram

Well mine came with the lightground But they shipped me the wrong one. I wanted the blue/white one. I contacted the US distributor and they where able to get it shipped. I just want to show the two different films I have.
As for as the sticky part of the film I used the poster sticky circles because it is real easy to come off if need be.
As you will see as more pictures I post you see a perfect background. Really love the background. Really couldn’t buy the ADA one as for my size tank it was 3 grand and would take 6
Months to make per quote from ADA.
You must log in or register to reply here.

F
The Beauty of Nature in House (330 liters planted tank)