hey, anyone kept one of the above (Goldspot Dwarf Pleco)
i have read about them, but there is very little on them, they are another small type of plec and they look to be a nice alternative to the likes of bulldog/rubberlip plecs and BN's as they sty around 6cm. they do eat elage perhaps not as voraciously as BN's but still, i think they will create less mess and also not bluunder arund the plants.

perhaps so info or discussion on these would be usefull. 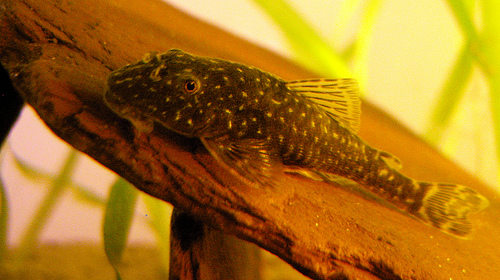 If so I've got one and he's lovely

When they're young or fresh caught they should be treated a bit like otos, they need a fairly mature tank with plenty of bio film to much on. As they get older they will learn how yummy algae wafers are as well as other fresh veg.

Unlike pitbulls (Parotocinclus Jumbo) they're more territorial and shy, they're not a fan of the bright lights and will tend to stay on the underside of dÃ©cor or in the undergrowth.

they are the ones. i thought that they are another type of small pleco that may become popular.

they look good, i will keep an eye out!!

That fish in the photo is gorgeous - do they really stay at 6cm?

EDIT: DURR!! You'd already posted a link which included the size. What a great fish. I'll look out for them!!

Thanks for the complements, I'm sure Shuey will be most appreciative of them The photos never really do him justice, the gold spots are actually iridescent, very pretty boy indeed!