does anyone have any tips on making rotala rotundifolia go red? im not sure if it takes its red colouration later. mine is just a green colour.its annoying because i bought r sp green for that purpose

as you can see its getting a ton of light (2 x 54whot5) and yet no sign of pinky reds.in another tank i have with low light, co2 and limited ferts my r rotundifolia is bright red almost 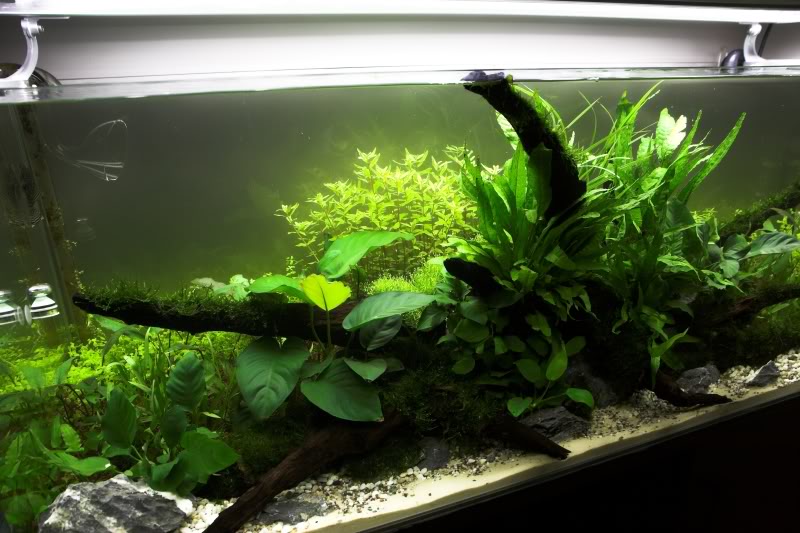 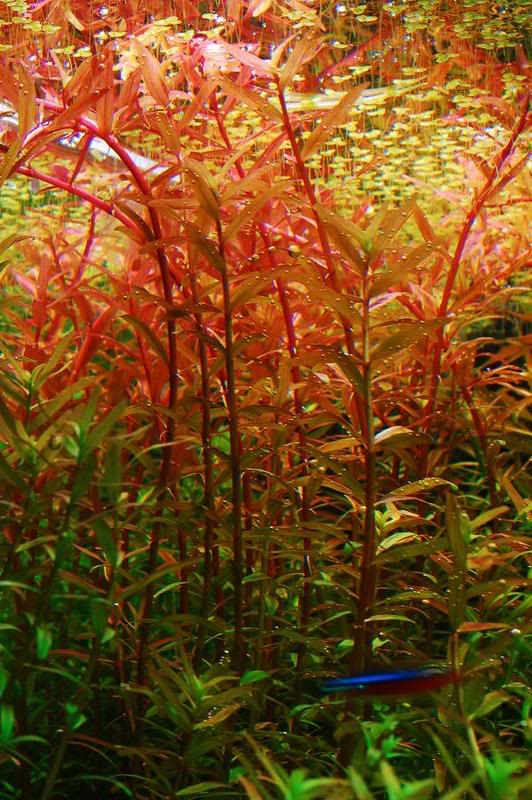 Nitrogen starvation can help to turn it red, apparently.

In your post it says you bought green rotalla, green won't go red only "normal" rotalla will.
Don't believe the hype.

Mark is asking about Rotala rotundifolia that is currently staying green. You are thinking of Rotala sp "green" Garuf.

saintly said:
.its annoying because i bought r sp green for that purpose
Click to expand...

I'm not sure I'm following? :?
Don't believe the hype.

i bought both. the rotudifolia which you can see is staying green. actualy dave i heard that staving it of nitrogen turned it red. i dont want to starve anything else though.

thanks for replying BTW

Just give it time would be my in put, I had it and have it at the moment and it doesn't really get that lovely red flame to it until it's surface bound.
I second what dave (?) said, green lines goes red much quicker than tropica's and I suspect this to be because they are different specie, rotallas are notoriously variable in this respect as so many specie are so similar.
Don't believe the hype.

I've got the same issue fellas, i'd love to see what you do with it Mark.

Mine came from Plants Alive and is good and red at the top. There's no shortage of nitrate. It tends to go straggly and green at the bottom when the top gets too thick.

My latin is virtually non-existent but surely rotundifolia means round leaved? (From a dictionary - rotundus : wheel-shaped, round; folium : leaf). Looking at Tropica's illustration, they show round, green leaves at the bottom and the spiky red at the top. I've only ever seen the spiky leaves on mine. Is the Tropica stuff potted - I wonder if it's a different part of the plant?
--
Richard

san-ho-zay said:
they show round, green leaves at the bottom and the spiky red at the top.
Click to expand...

the round leaves come from emerged growth, the pointy leaves from immersed growth. it takes on a different look.


Dan Crawford said:
i'd love to see what you do with it Mark.
Click to expand...

if it stays green i might attempt starving the tank, but all that just to make plants go red?...nahh not for me....yet.


Garuf said:
it doesn't really get that lovely red flame to it until it's surface bound.
Click to expand...

good point. we'll see what happens over the coming week. its getting close to the top.

Just seen this. I brought some rotala rotundifolia from Tropica a little while ago and have also noticed it never goes red, even when it reaches the surface. This is with 4wpg of T5 as well. Funny thing is is that I also had some rotala sp. green so now have two lots of green rotala.

Be interesting to see if anyone has got the Tropica rotala rotundifolia to go red.

this varity is from aquafleur james. i dont want to experiment with this set up. if its stable then i wont play. i have had go bright red before.


JamesC said:
Funny thing is is that I also had some rotala sp. green so now have two lots of green rotala.
Click to expand...

thats the problem i got. the back will just be a see of green. the m ubrosum is real bright green i just wanted that red off center. oh well....

My Ludwigia arcuata is only red at the top, I always thought plants only went red at the surface because there was more light there.

A tip I found especially useful with rotallas is to let them grow about 10inches longer than what you intend them to be in the final scape before you do the first trim. I find that this helps the plant to recover much more quickly and the stems are much more robust.
Just a hint. 8)
Don't believe the hype.

over the last few days, maybe a week now, i've altered my EI dosing. on hearing that k, or more the fact that limiting k and adding more trace's could enhance red plants, i tried it for myself and sure thing i'm starting to get red rotala rotundifolia.just how far it goes red is another question. it started in the stems which is usual but now the leaves are turning. i think to, that trimming helps.

It's been a while since this thread started but I just managed to get my rotala rotundifolia to go red more by chance than anything.

Ever since I upgraded my lighting to an Arcadia luminaire with four 54W T5's I've never been 100% happy with it. I could never get the colour of the lights to how I really like and also plant health never seemed to be as good as I wanted. After talking with Sam (Themuleous) about his tank problems and seeing that he mentioned that he wasn't happy with his T5's as well I decided to switch back to my old T8's which comprises of two 38W Grolux and two 38W GE Aqua 10K tubes. The GE tubes are very similar to the Triplus tubes except a lot cheaper. I know a lot of people like the 6500K bright green tubes, but I prefer a more mellow feel to my tanks.

Within just a few short days the green rotala rotundifolia is now growing in a beautiful pink/red colour like I've never seen before from this plant. I'm still amazed that something as simple as a change of light has produced such a dramatic effect.

In the past I've tried several times to change parameters in the tank to get the r. rotundifolia to colour up without success. This has included lowering the light intensity and changing dosing and water parameters. It would appear that by changing the spectrum of the light source has made the biggest difference.

Be interesting to see if anyone else has noticed anything similar after changing light sources. Anyway for the foreseeable future I'm sticking with my good ol' trustworthy T8's.

Hi James,
I think Rotala is in a class by itself in terms of the mechanism of it's color changes. Perhaps in this case, staying non-red is it's form of protection from high energy. This may not be the case with other species which exhibit color changes seemingly for other reasons. Haven't quite got the grip on this as there appears to be so many variables. I've had color changes in other species without any attempt at spectral variance.

Anyway, you've changed two things - the intensity as well as the spectrum. Would be interesting to see if the color change remains in effect with T5 versions of the Grolux/Aqua

I've got the same plant growing under three lights:

Tank, Arcadia (bigger one) 2 x Arcadia podlight - grows fine, even pinker than under the Interpet light.

The plants are all cuttings of each other, so no different varieties.

Just in case that's useful to anyone.

I've always thought that red plants won't absorb red light, as they appear red to our eye they must be reflecting red light. It therefore stands to reason that they will most absorb the colour opposite to red on a standard colour wheel.
If the desired colour of R.Rotundifolia is a pinkish red then the colour of light most absorbed should be green. In my (unfortunately rather limited) experience i have had more red growth with ' Interpet Daylight Plus' lamps peaking largely in the green spectrum than with 'Aquaglo' or 'Grolux' type lamps peaking in the red and blue.
I realise this is fairly inconclusive, but it's food for thought.

Hi,
This is not necessarily true, and in fact it's more likely to be an illusion that anything else. Firstly there are quite a few wavelengths that qualify as red, 700nm being at the extreme end of the spectrum. Secondly, just as in a CRT television, which has only the three primary color guns, any given color can be simulated by a combination of the other primary colors or by a combination of the complimentary colors. This means that a plant can have various pigments that reflect green, blue, magenta and so forth such that we perceive the combinations of reflected wavelengths as red. In the same way, it is a fallacy to assume that green plants necessarily reflect only green just because they appear green to our eyes.

Additionally, it matters not what peaks are shown on the spectral characteristics of a bulb. These are often marketing cartoons which do not tell the story of the bulbs true output unless one interprets the cartoon properly. A single peak in any one wavelength is meaningless and it does not mean that the bulb outputs mostly in that wavelength. It only means that at a given wavelength the energy happens to be high, but in relation to the combined energy output it may be a very small fraction of the total spectral energy. Some bulb formulas do specifically suppress certain wavelengths however, this is not the general practice.