I've got a small well planted tank (90l) with a few danios, tetras and three Ottos. I introduced a couple of what I was told were Amano Shrimp and at first all seemed well. I then saw the Amano attack a Rummy Nose Tetra by grabbing its tail, the tail later turned white and the Tetra died. I supplement the shrimps diet with tablet food and bits of cucumber.

This morning there is another Rummy with a white half chewed rear end. I read that Amano's sometimes attack fish if the temp is on the high side so I've adjusted it down from 26Â°C to 24Â°C. I'm wondering if what I've got are not Amanos. The pictures of Amano's on the web look nothing like the shrimps in my tank

To my untrained eye they look more like Ghost Shrimps. Do these attack fish?

Here's a pic, any ideas? 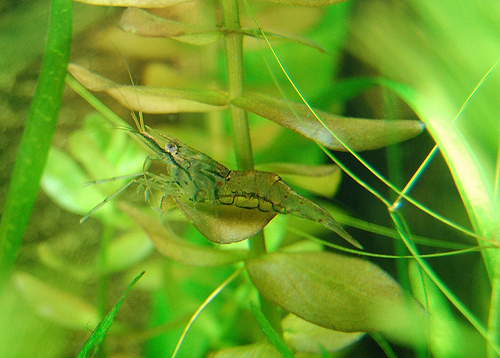 I'm not an expert on shrimp id. Have you tried planetinverts.com ?

Thanks Mark, I'll give them a go
T

Yeah, ain't an amano. Tales of glass shrimp and river prawn (the other contender) are rife. long arm shrimp are especially bad too.
Don't believe the hype.

Looks like they'll have to go. I just watched one attack another Rummy Nose Tetra. It looked as if it was hunting for them. I tried get a video capture but was so out of focus it wasn't worth keeping. Anyone in Derbyshire UK want two shrimps .... Free to good home, just don't keep them with Rummy Noses hehe.

Hi, If you don't get any takers (even if you do it's worth a phone call) I'd return the little hitmen back to where you got them from & advise them that they're not Amano shrimp - otherwise other unsuspecting aquarists will slowly see their fish being offed!

Regards
Will
"Say hello to my little friend..."

I had a similar one in my tank last year....

ghost/grass/glass shrimp or some kind of juvinile macrobrachium.
either way, they are potentially agressive as you have discovered
T

have a look at this link and site.

Thanks for the help guys, I've taken them back to the shop, not a moment too soon. They were getting very bold, hanging out in the plants near the surface and grabbing at fish as they swam past. From the link that thebullit gave me (thanks) I would say they look most like the Sri Lanka Dwarf Shrimp.

i have to add that sri lankan dwarf shrimps WOULD NOT attack fish, nor would any other true dwarf cardina or neocardina (sri lankans bieng the first)

The shrimp I had were definitely not Sri Lanka Dwarf Shrimp as reading the description they only grow to 20mm whereas the ones I had were at least 40mm.
M

sounds like a macro sp. rather than ghost as most ghost sp's stay smaller than this or 4cm as an absolubt maximum.
You must log in or register to reply here.
Similar threads