Thats sweet, if a little confusing, for me anyway.
So you have RO running into the tank perminantly? And it just over flows at the other end of the tank?
Im cofused about why you have solinoids on your pipes /
Do you have a sump or barrel of RO water, so when the solinoids trip, they pump out and in at the same time?

Sorry i must sound so thick, just trying to understand how youve rigged it all up to work.

Pretty much, the RO and HMA is on for about 4.5 hours per day which is how long it takes the filters to produce 100lt of the right TDS which goes directly into the tank, no reservoir. I have the solenoids, these just after the tap (which is always open) before it reaches the RO / HMA unit. So when my aquatronica computer turns the plug on for the solenoid, the solenoid opens and water goes through the filters and into the tank.

I just had to work out the flow rate of each filter and get the right mix of water and then time how long each solenoid needs to be opened to get the right amount and mix. The reason why i have the third solenoid just before it goes to the tank is just in case one fails

The tank is drilled at the max water line and when fresh water goes into the tank, the excess drains off, so it always stays the same level

Dont sound thick mate, took me ages to get my head round it all too

Cheers mate fully understand. Must of been a real brain puzzle working out all the water stats etc, and then match that to your Flow rates and volume, fair play !

Time for an update, 3 weeks in yesterday

Had some diatom issues, but these have now passed and il be moving my discus in. Got 60 cardinals in there at the moment and a few otos, will be adding another 20 or so in the new year.

I also finally got rid of the eheim pipe and got myself a ADA 20mm intake pipe, very sexy

Swapped the cheapish MH lamps for the ADA green 150w ones, and WOW is all i can say, if your debating buying one, do it, you will not be dissapointed.. Have not played with the colours on the photos, the plants are really that green

The balansea has finally taken to the tank and its bulking up and looking nice and healthy, a few more weeks and they should finally be visible behind the wood and echindorus 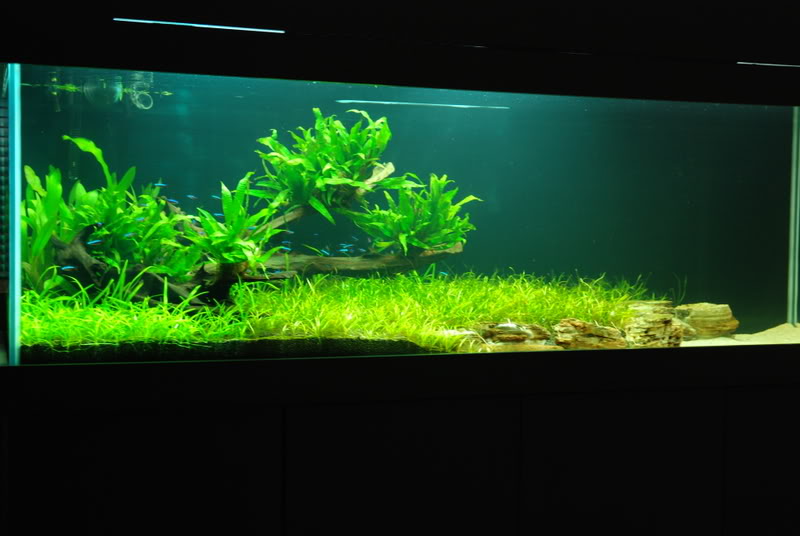 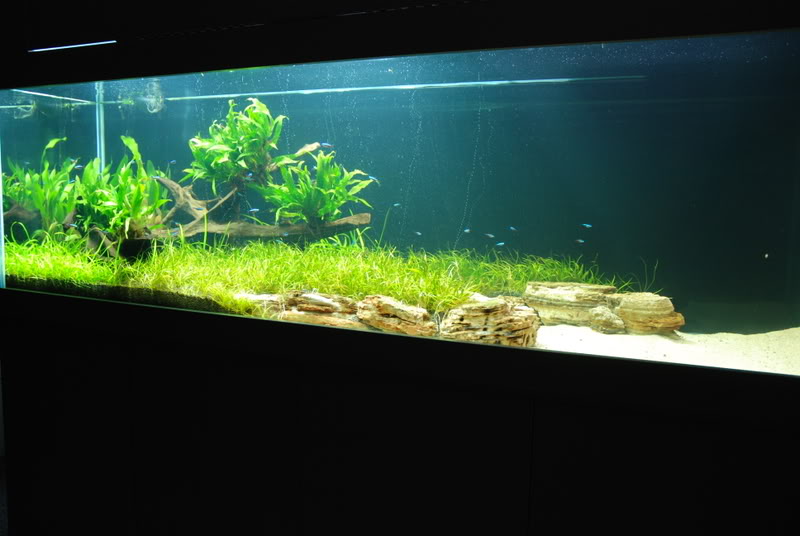 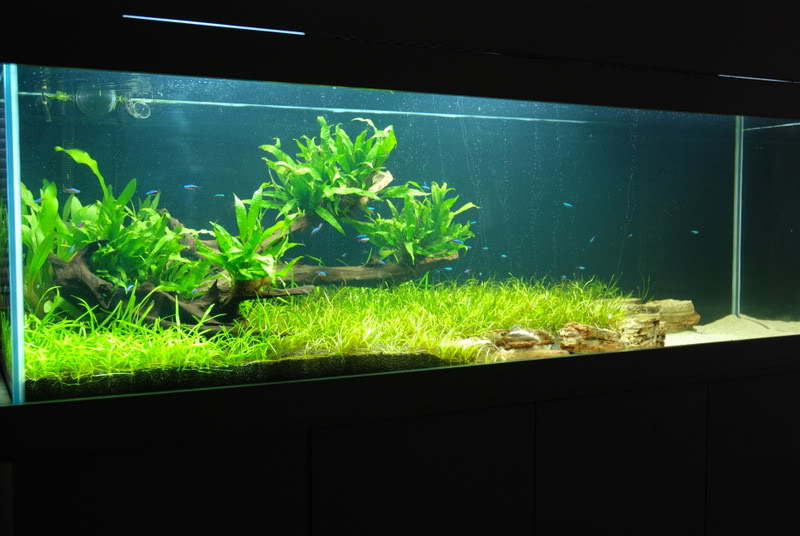 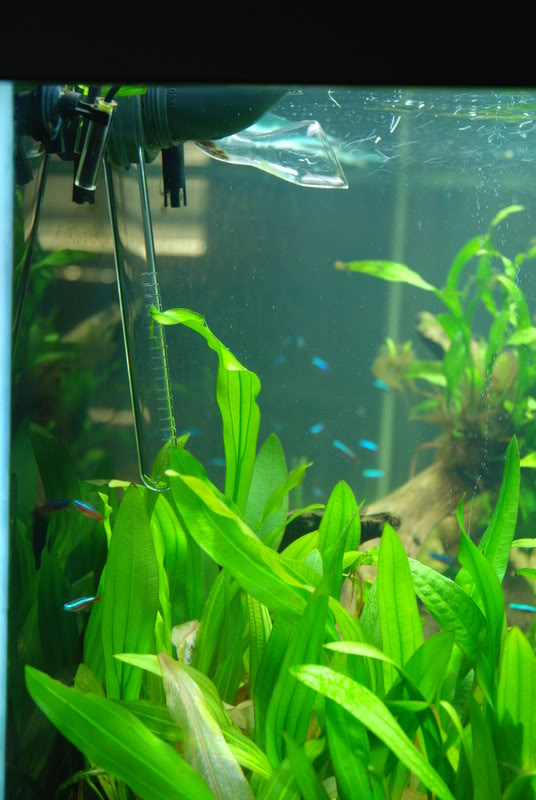 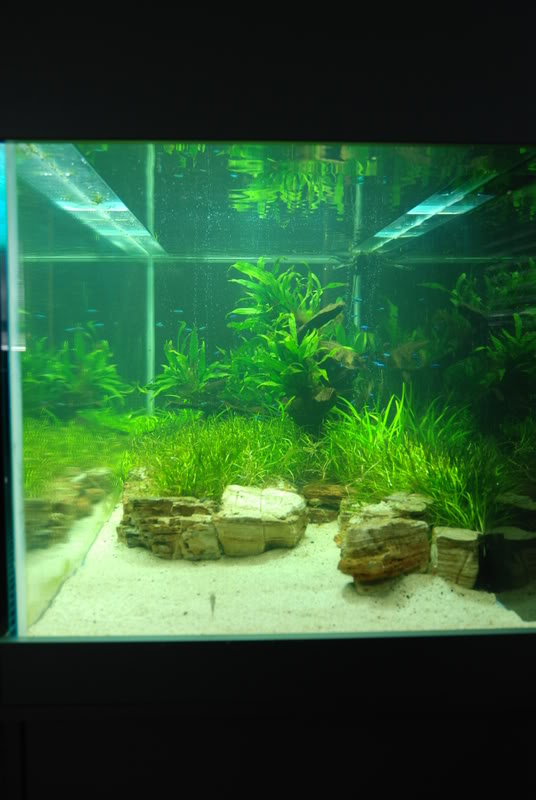 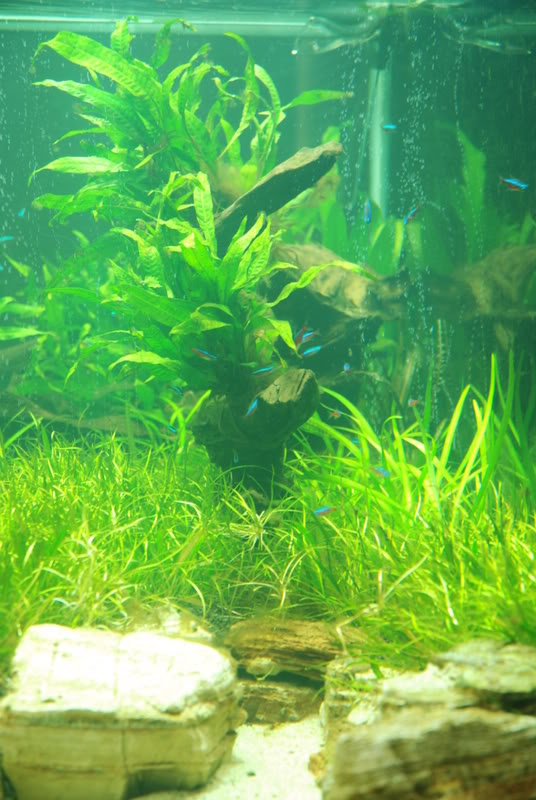 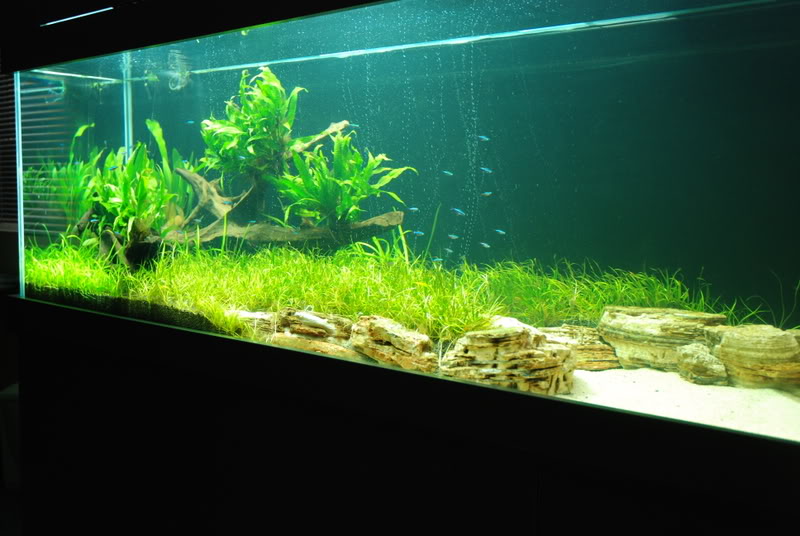 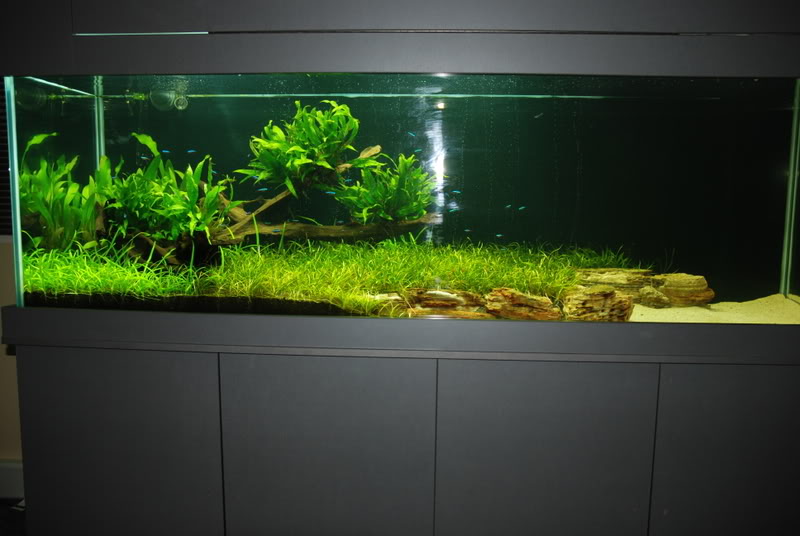 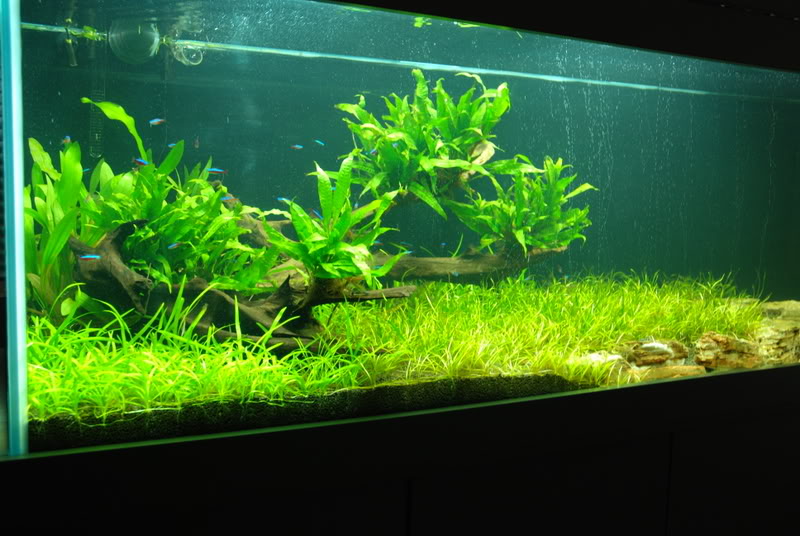 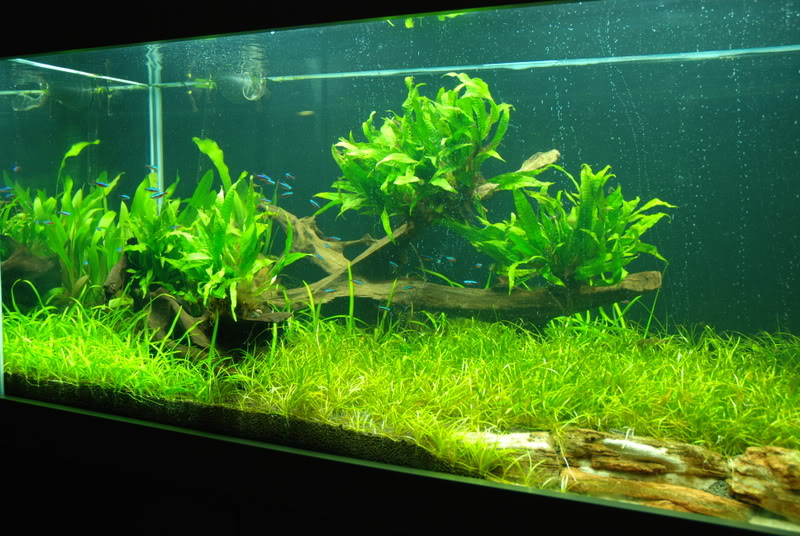 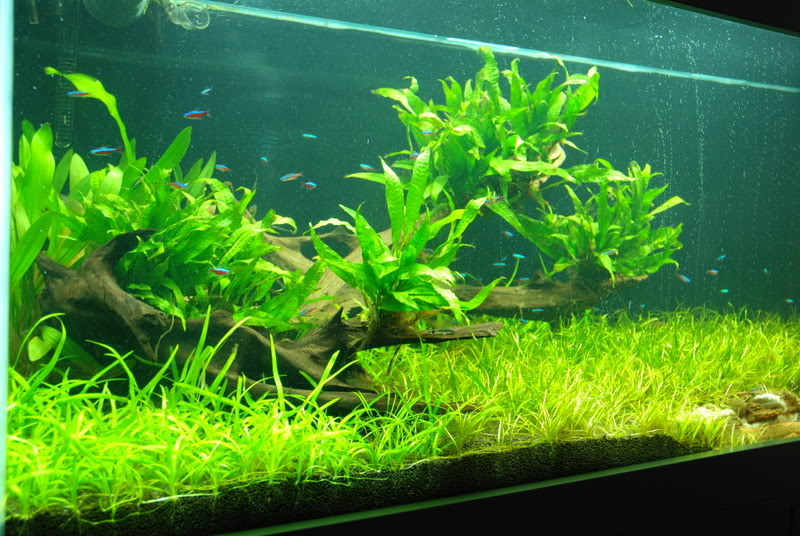 It`s shaping up to be very nice James. It reminds of my favourite all time scape by TA.

Personally, I am a little unsure about the rocks that separate the sand from the planted area. It doesn`t look like a natural barrier.

Are you using PM Glass lily pipes? If so, what do you think of them? I have two pairs sat waiting to go in to a future 120cm project.

Many thanks for the critique. I have never been 100% pleased with them.

I am visualising it without the stones and it would look allot more natural. I just wanted to do a good barrier between the AS & Bright sand as the discus will be messy.. But.. overall i think that it is worth removing them and the extra work wont be too much of a problem. The stones are holding the AS back, so it should just fall nicely without too much mess Who knows the AS may even keep its shape well if i am careful, which would be nice.

Are you using PM Glass lily pipes?
Click to expand...

Whos that? I cant actually remember who i got them from as it was a year or so ago, but it was through ebay.

Any algae issues yet?

Maybe the rocks might look better if the sand was higher? They kinda look like they're perched up a little bit. How deep is the Aquasoil?
Ed

the rocks will be going tomorrow / Monday. As for algae, only diatoms and a tiny bit of green spot on the glass.. Only running the halides for 1 hour a day at the moment

The temp is pretty stable, got it at 27c, will be moved up 1- 1.5 when the discus are in. Il post the graph from my AQ when i get a chance

EDIT: AS is pretty deep towards the back, il get a picture of the slope, prob about 6", got 18lt of power sand special under it all too

The discus will love it
Always learning...

Have you thought about softening the look of the rocks with moss?

Not sure about the moss.. would go all over the place, id prefer it in a smaller tank

I think Dave has hit the nail on the head..

Well i got the stones out without too much hassle. Had to add a little extra AS. Tomorrow il be thinning out most of the tenellus and replanting it as its already a little thick as the emersed bunches are pretty big. I also have to level the front of the substrate where the AS meets the sand, have to adjust the front 'headland' and round it off nicely, if you see what i mean. Then clean up again and lay some fresh sand down and sort the edges out

I am happy with it, let me know your thoughts. 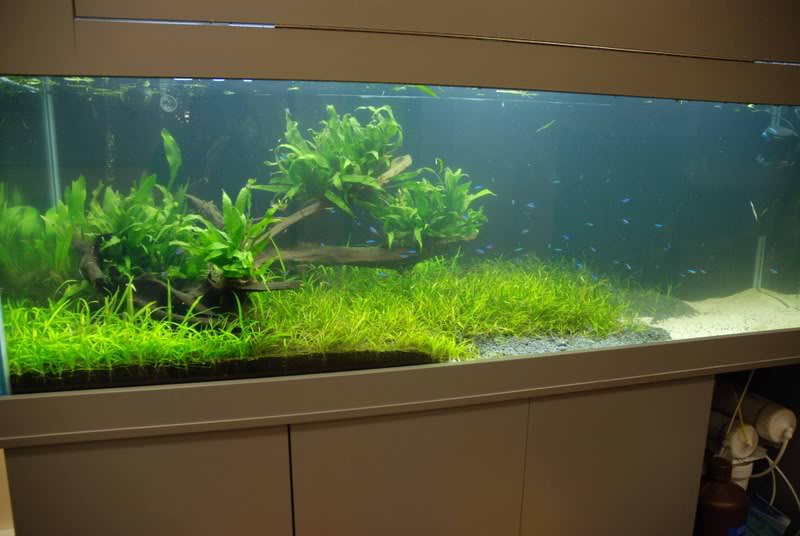 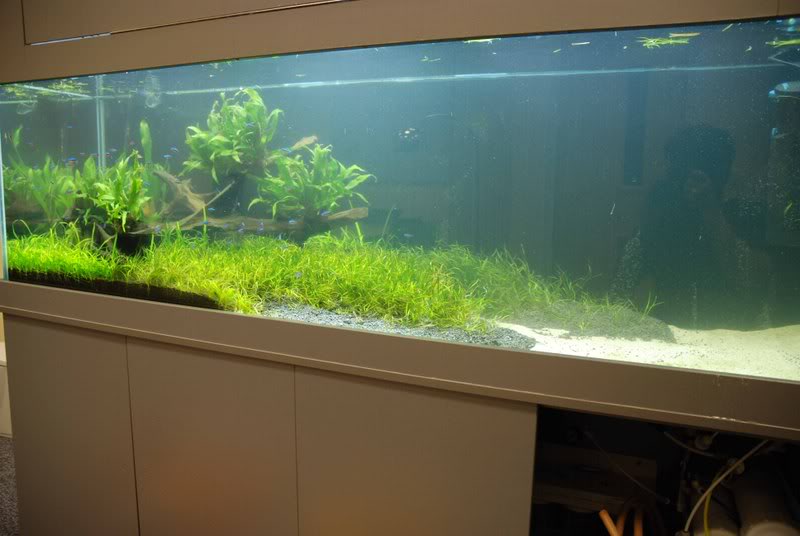 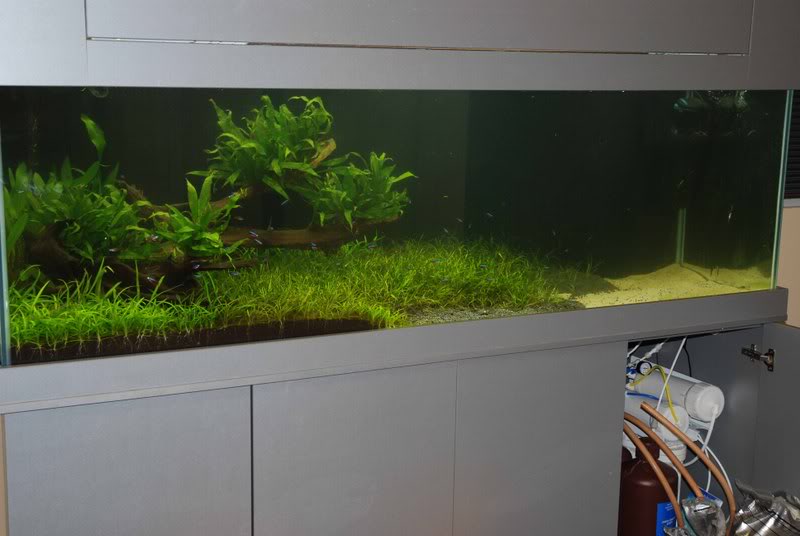 well james I'm jealous - of your lawn. I've never managed to create a tennelus lawn. It's always the algae that get to it first before it comes into fruition. If I could get a lawn like that I'd be a happy man.

Regarding your water change method, you say you dump in 100 litres a day. The funny thing is, because of the mixing, 100 litres is not actually changed. If you think about it, and if we assume immediate mixing when the water enters the tank, and assuming your tank volume is 625 litres (allow for thickness of glass and slight displacement), when you push 100 litres new water in to do the WC, you've effectively also drained about 7.5 litres of it as well through mixing in the tank. So a 100 litres implicit WC by the method that you use is only a 92.5 litre explicit water change. Makes you think doesn't it?
C

Without the stones it looks much nicer, replacing the sag with more tennellus would help to improve the look again.
growing algae since 1982

Cheers, yep, decided to take it out not long ago, got some more scaping to do tomorrow..

So i took all the stones out and have exteneded the sand foreground, i will need a little more to bulk up the right side, another AE order

Tank took a bit of a hit when i ran out of co2 over the new year, but its recovered now and just have a tiny bit of BBA / green stuff on the wood that is turning red after spot dosing with excel. Only just turned the halides on really, so that tenellus should go a bit more red soon

Added the anubias coffeefolia, should be able to keep this under control, some aquatic bonsai may be needed

Trimmed the ferns right down and got rid of most the old leaves, just new growth is left, should hopefully promote some more shoots soon, have to trim those roots.. The urugyanesis was also trimmed and got rid of all the emersed leaves, and the balansea is growing nicely, shame its not in view yet. And the tenellus needs to bulk up also on the rear headland as its newly planted.

No more discus in this tank due to the layout, i am hopefully getting some Orinoco Altums in the near future, which should be kinder on the scape..

Tank is still a little cloudy as i did most of the trimming and topped up the sand yesterday, and you can see the bracing because its having a water change at the moment 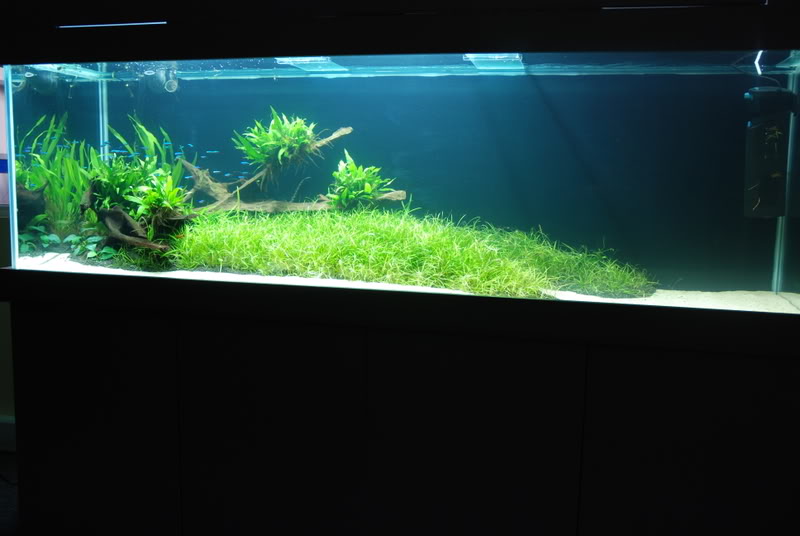 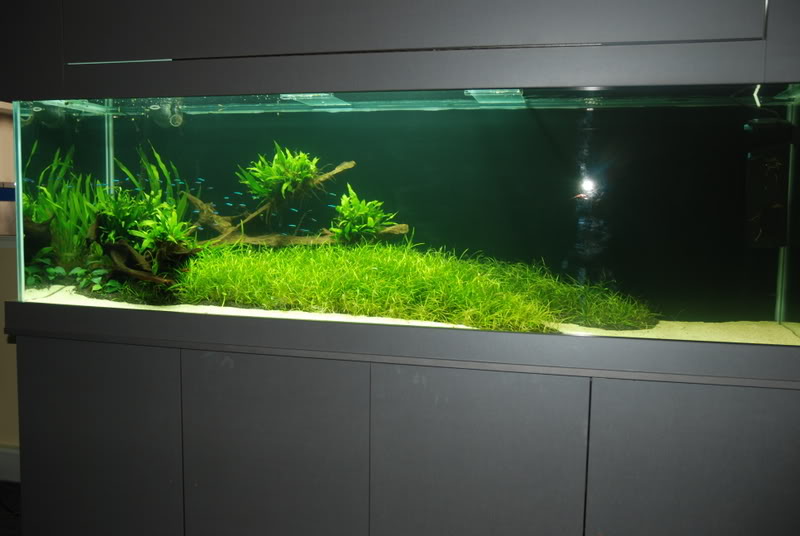 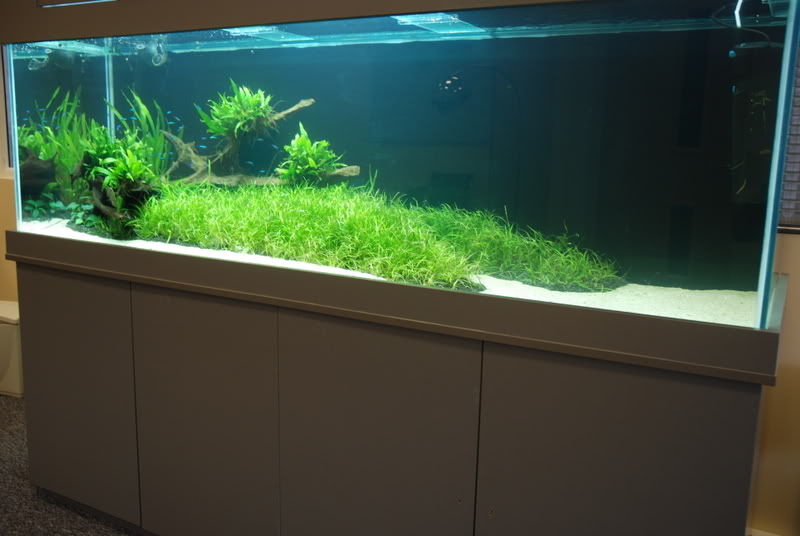 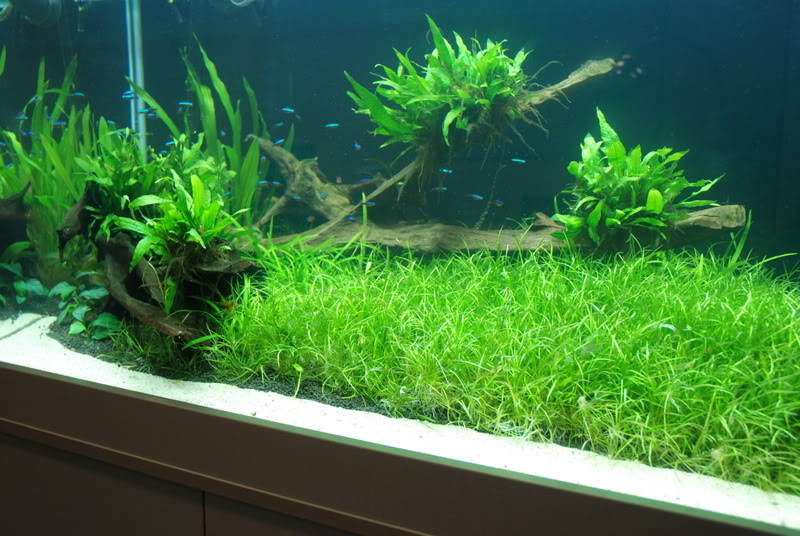 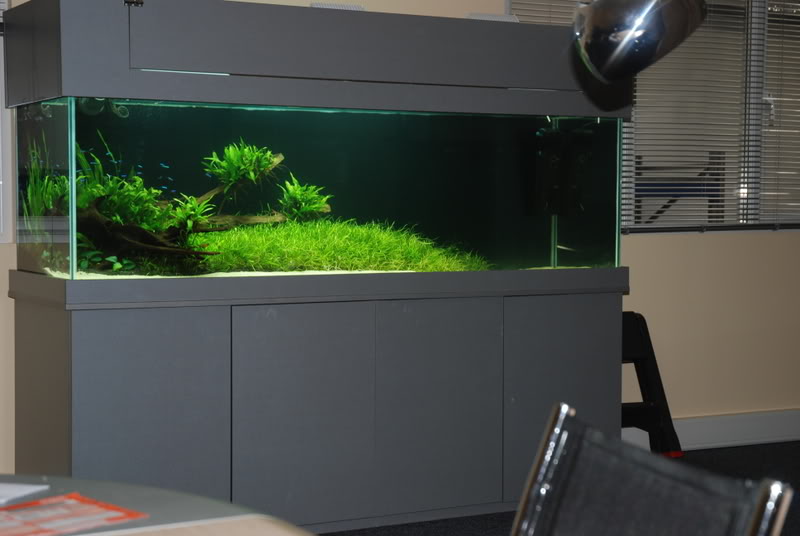 Looks much cleaner now without the sag, a vast improvement in my opinion
growing algae since 1982

Agreed, but there still seems to be something missing and I just can't put my finger on it...
some variation in plants in the grass area maybe?
Don't believe the hype.
You must log in or register to reply here.
Similar threads