A little trim on the moss will help them give more shape. Fissidins and xmass moss not included, they dont look great when trimmed. The others though would approve.

Love the shrimp, where did you get them?

Thanks Graeme, I would love to trim and clean it all but every bit of moss has half a dozen shrimplets sheltering in it !

Overall I'm not really happy with the scape and will re-do it when the shrimp have matured, I think the big central rock is too distracting. I would like to do a branchy predominantly moss scape in future, with just plain sand on the bottom. Next time i'll also use just one kind of moss, instead of four.

Believe it or not there is some star moss still surviving (not exactly thriving). The Fissidens was from aqua magic but it was the non-aquatic one! The CRS, I found in Pier Aquatics in Wigan, I used to work near there. I guess in a couple of months i'll have an excess of shrimp, so I could spread them round. Tom

I have managed to find time to clean the tank a bit but still can't really trim the moss, the shrimp however seem not to care and are thriving. Does anyone know how to grade the babies? they seem to have better colours than their parents, I guess this might change when they reach adulthood. Found a healthy population in the external filter! Here's some picks of the shrimp rodeo.... 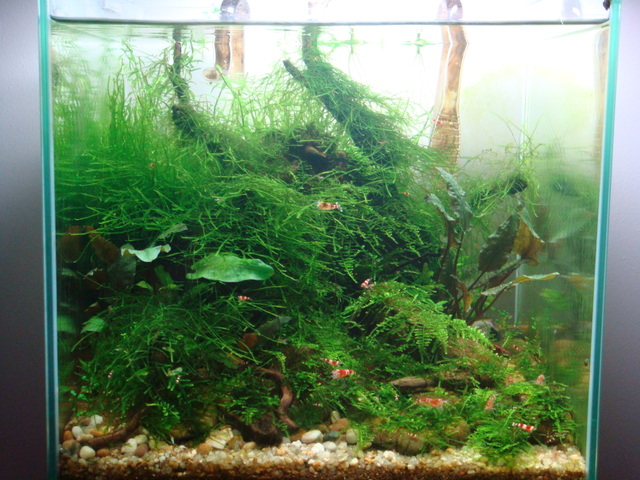 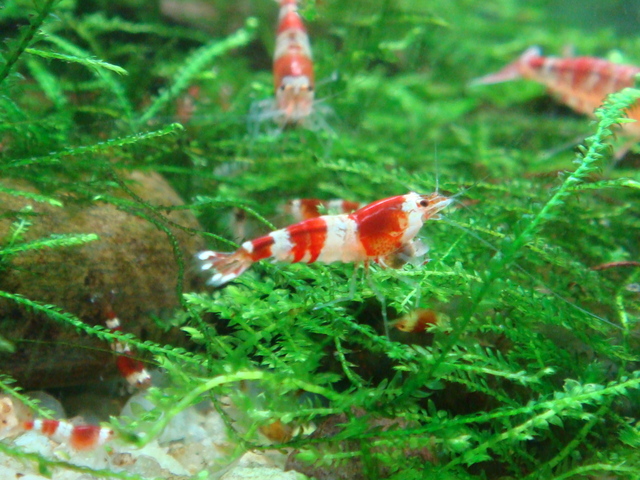 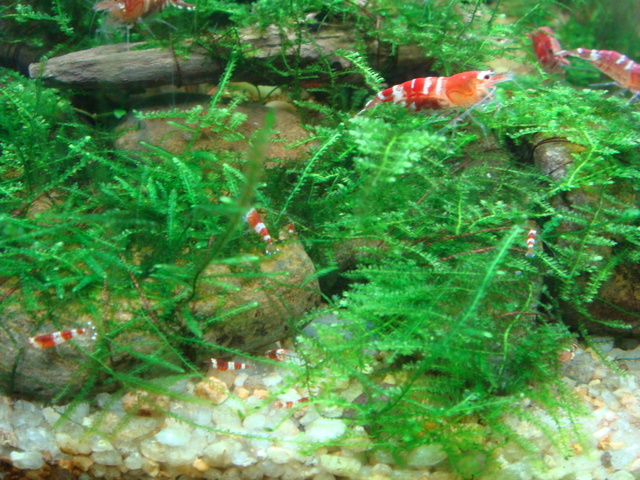 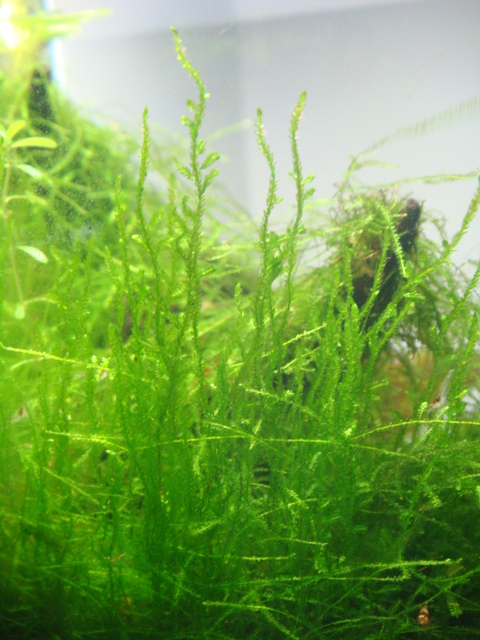 With some careful pruning, that could be a stunning tank!

OK, I finally got my ass in gear and did some trimming, was amazing how much moss I pulled out. Here's the new crew cut lay-out. Now my dirty glass wear looks rank.... next job

A leaf out of Clark's Journal - View from My Bed

Looks nice Tom.
I fancy trying something mossy when my 'gumi layout is finished.
Love the shrimp, they must love it in there.
My Nano Journal

Just managed to capture the Rasbora brigatte out of my big tank, added them to the nano and already their far more outgoing. I think they just don't like being in a big open tank. Trying to take a shot of one is tricky but you get the idea, nice to have some movment in the midwater of the tank. They are a awsome little fish, definatley to be recommended for nanos. Their also so small they only pose a threat to the very tinyest shrimplets. I suspect I have two species as some have a black stripe and some have two black ovals - T 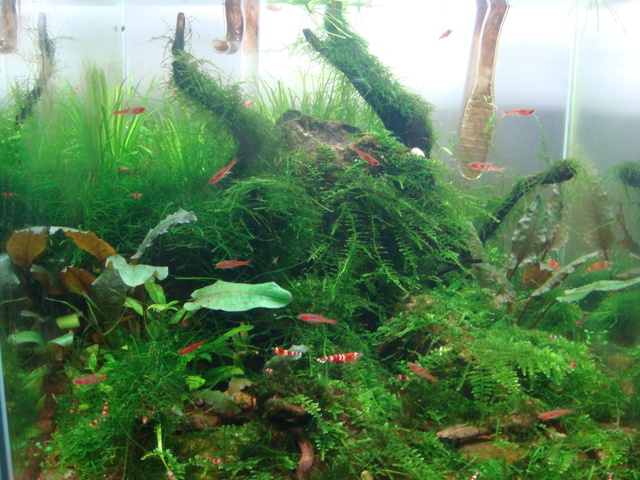 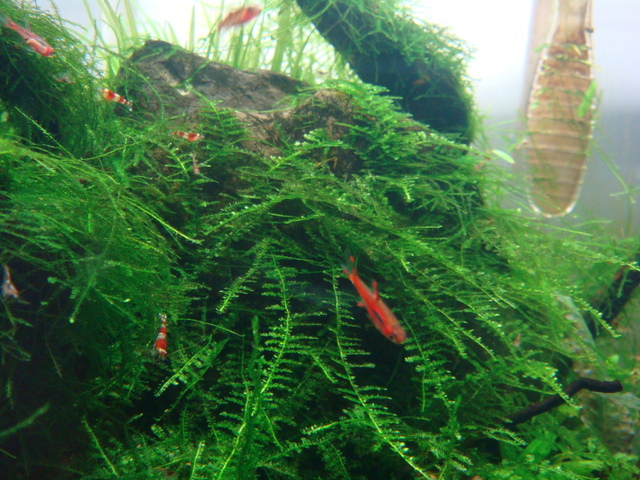 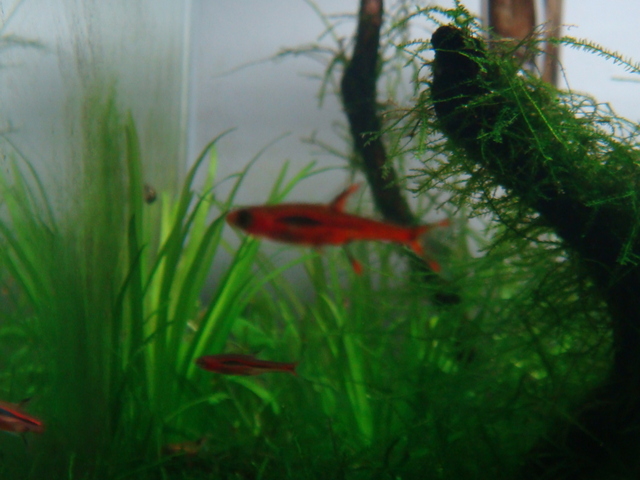 Looking pukka the fish really work well in a small tank like this. They have always been one of my favorites.

PS - if you decide to sell some of the CRS let me know
Always learning...

Those microrasboras coloured up really really well! They must be really happy in this tank.

Thanks for the comments guys, I'm not purposefully neglectful of my tanks but have a big exam coming up. Hopefully will be able to give the tanks the attention they deserve after. I'm very happy with this one, as the moss is the ultimate in low maintainance, the Crypt wendtii is really nice, seems to being growing in smaller leaves now. I've moved the hardscape around a bit, will post some pics at the end of the week.

I've had a play around with the wood and the big stone, I prefer it this way round, feels more interesting to me. What do others think, this way round or the previous scape :?: Does anyone know how I could clean my glasswear :?: it's so tiny that I can never imagine a brush doing the job. Can you bleach them with lots of rinsing, or is that just asking for shrimp genocide :?: Thoughts most welcolme, Tom 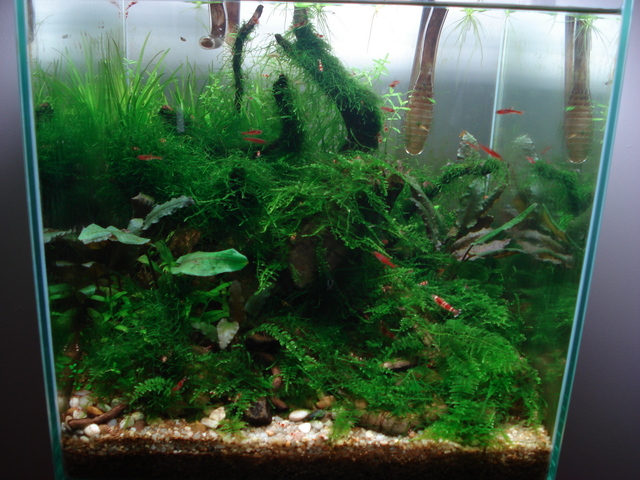 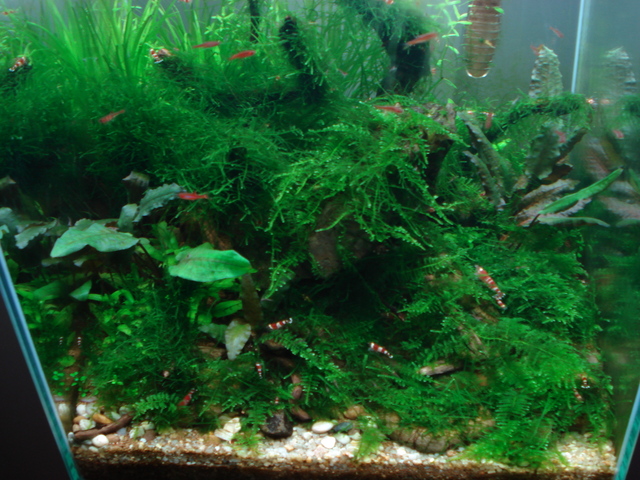 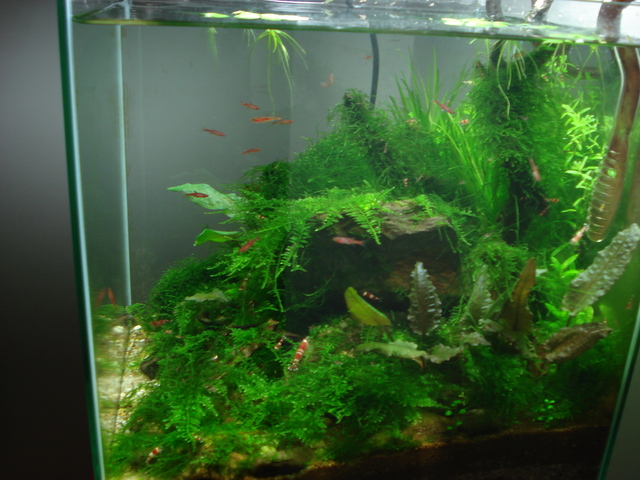 Hi Tbro - The nano tank is looking really good - getting a mature look about it.

This tank is awesome - you must spend hours looking through all that moss at the masses of shrimp! This cube was part of the inspiration for my new tank.


TBRO said:
Does anyone know how to grade the babies? they seem to have better colours than their parents, I guess this might change when they reach adulthood.
Click to expand...

The more strong white in them the better. The 'ideal' CRS is almost entirely white apart from a spot of red across the 'shoulders'. Most of the colouring is down to genetics of the individual shrimp, but the strong white can be helped with calcium in their diet and water. They say the calcium is crucial when they are young to develop to their 'best potential'. You can buy specialist CRS calcium supplement powders and liquids to help boost it, but I'm not sure how effective they are for their high cost. Just keep an eye on GH, also Snail Shop do a cheaper liquid calcium that you could use. TBH though I'm not fussed on grades with my own CRS but its good to keep an eye on the calcium to stop 'pitting' in their shells.

A lot of the red and white in the babies may look stronger because your eyes make the colour more concentrated where they're so small in comparison with their parents so you can't see the more translucent bits.

Hope any of thats helpful to you!

This tank ROCKS! Well done on the CRS reproduction too

Cheers for the nice comments Guys, your right Neal at the end of the day grading doesn't matter if your enjoying the shrimp doing what they do.

They behave a lot more naturally in this tank than in my big tank, swimming around and surface skimming etc.. Malbros has first dibs on any extra babies but I'll pass them on if the population needs thinning out. I found about 5 happily living in the External the other day :!:

very nice nano , i think this one has a great potential , maybe only be careful that the most doesn't cover all the hardscape , would you have a front picture taken from a bit higher than this one and without the filter ? (i edited it a bit , sorry )

Thanks Nico, that shot is loads sharper, must check out the photoediting thing sometime. The white background always makes things look over exposed. Here's a few shots without the filter, until I learn to take proper photos :!: 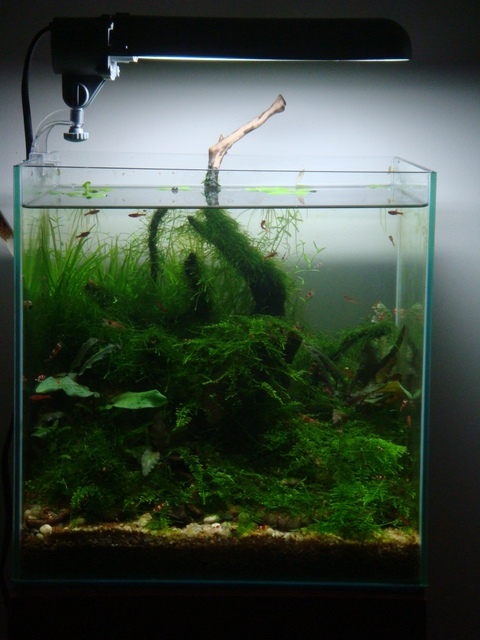 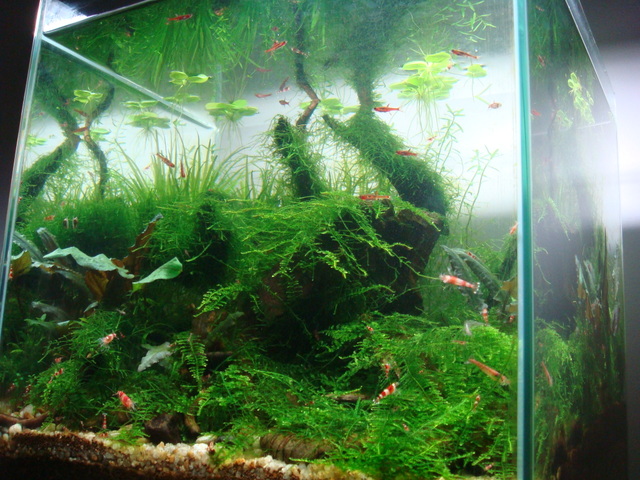 Cheers - Tom
You must log in or register to reply here.
Similar threads