I've just added a school of 8 pygmy corys to the tank. Seven of them are fine, happily school together and root around in the substrate all day for food. One is very lethargic, with clamped tail fins, and barely moves. I'm pretty worried about it, and am setting up a quarantine tank, but unfortunately it's still cycling and not fit for a fish right now. I do have some meds on hand - Fritz Maracyn (antibacterial), Fritz Paracleanse (metronidazole + praziquantel), and Ich-X (malachite green). Should I use any of them? Or should I just wait and hang on until the QT tank is ready, and hope the corydora pulls through? Or am I overreacting?

I can't spot any red or white spots. It looks like it's breathing heavily, but mostly it just sits there on the sand or on a lava rock with a clamped tail and doesn't school with the others. It's eating, but barely. 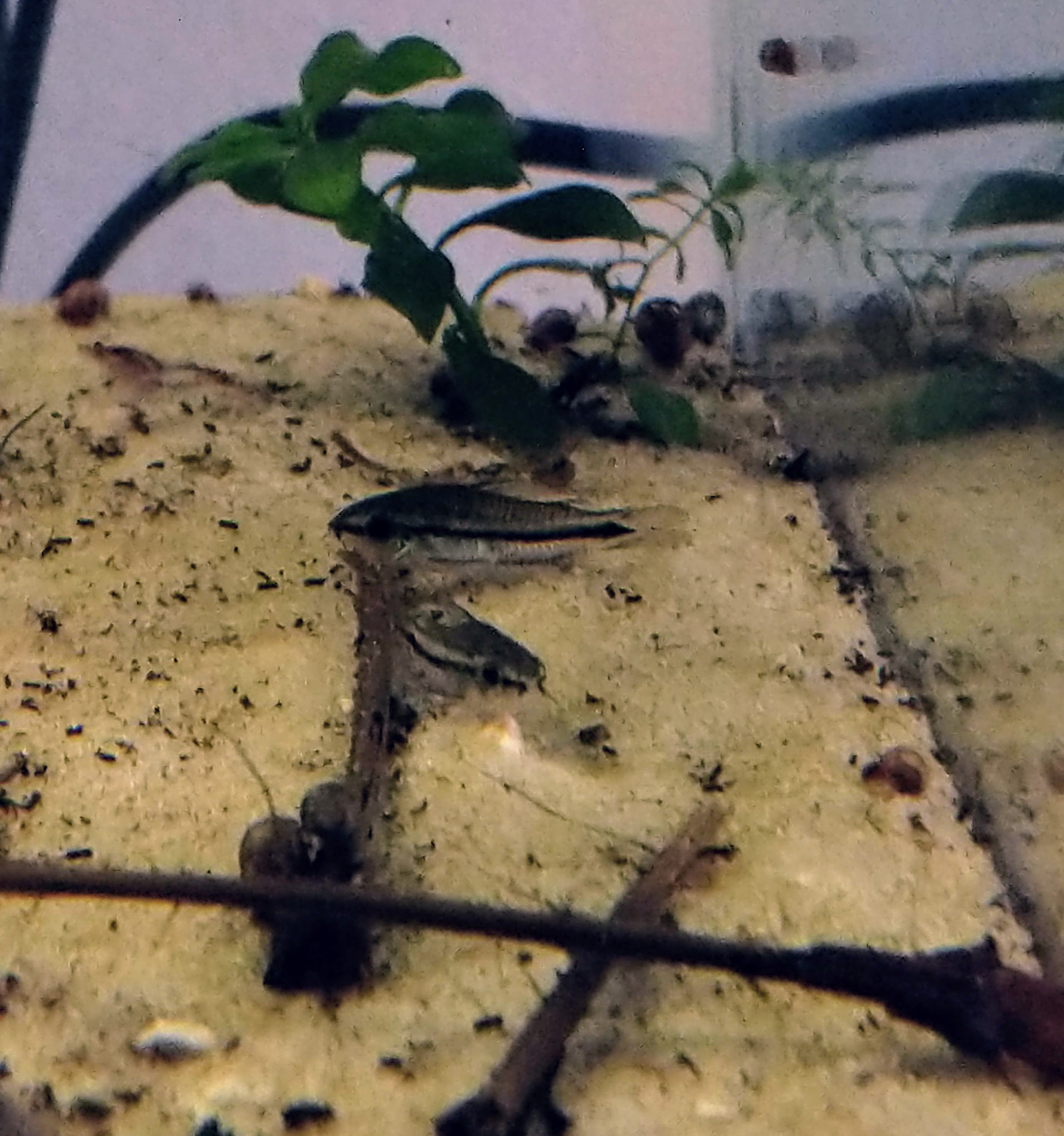 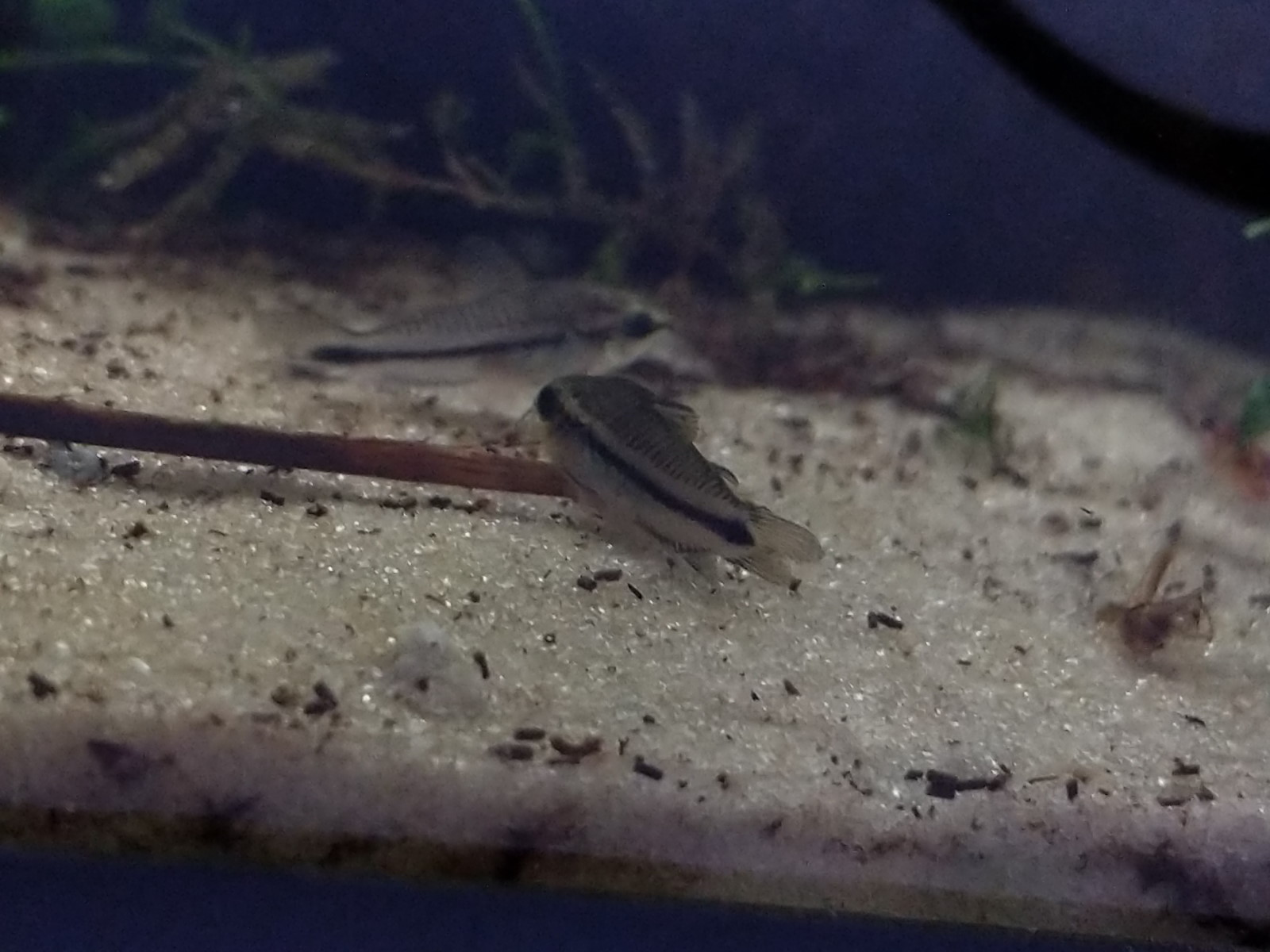 1) large water change
2) IchX - while Corydoras and some tetras can have adverse reactions to dye medications, I’ve seen more fish die from ich than medication, just dose carefully and in stages, also ensure good oxygenation - reduce water level so your filter return splashes
Determine IchX dose for tank, if you have the dropper version, carefully add half the drops into the filter flow so the medication immediately disperses OR add total medication to 1-2cups aquarium water, and slowly pour half into the tank
It’s obviously a more conservative approach to add the medication to an intermediate container (in case you accidentally overdose the drops etc), then measure the appropriate amount into another container, and add this directly to the tank
(I’m going a bit crazy here but after constantly reading on forums how aquarists can’t manage proper use of test kits (so best not to use them at all), perhaps I’d best recommend a conservative method for dosing medications )


While the affected Cory may not have ich, it is displaying classic symptoms of external parasites - which tend to be quite infectious
As this Cory is so lethargic, I suspect it may not recover despite medicating (though Pygmy Corydoras do tend to appear quite devastated when unwell)
Keep dosing the tank as if you’re treating Ich for the next few days (as recommended on IchX bottle)
(Ich is very common in transported fish so it’s not unlikely that Ich is present despite the lack of white spots - these actually appear once the disease is well advanced)
A

In terms of the Q tank not being cycled, I worry about this less than the chance of increased cross infection of other fish
- how big is your Q tank?
- what is in there precisely?
- why not add some sponge from your Aquaclear 50 to “instant cycle” the Q tank?

All sponges in your Aquaclear, the carbon insert and biomax will have “good bacteria etc” after several weeks (I’m not sure what Hagen suggests in the manual, but rinsing with aquarium water or treated tap water just to remove debris will leave a good load of residual bacteria behind in the sponge etc) removing 10-20% should not affect the cycle in your 29gal

I recommend - OK the textbook recommendation is at least a 10gal tank for Hospital or Quarantine ... it’s no chance that aquarium meds include a dosing based upon 10gal (industry standard and all that)

If you add a single tiny Pygmy Cory to your Q/H tank, and do 25-50% daily water changes, there will be negligible ammonia/nitrite ... the downside is that the single Pygmy Cory will be quite distressed at being the lone Pygmy Cory and the lone occupant
Further as mentioned above, I’d be surprised if this is the only Pygmy Cory that is infected (with whatever) - though it is the only one showing advanced signs of illness

Sometimes all that is needed to maintain health in the rest of the fish, is lots of clean water, decent food, low stress environment

Once the IchX course is finished, I’d continue doing daily (if possible, or at least alternate day) 50% water changes), after a week or so with only apparent good health among all fish, move to twice weekly water changes, then eventually a regular weekly 50% water change


Please save the Fritz Maracyn for a far far away day

Mardel Maracyn® is a specially compounded broad-spectrum antibiotic (erythromycin) which has been shown to be effective against a number of pathogenic bacteria associated with ornamental fish disease. It was developed for complete but gradual dissolution in water. It is primarily effective against gram-positive pathogenic organisms. Symptoms of clamped fins, swollen eyes, heavy or rapid breathing, patchy coloration, change in swimming behavior or corner-hiding can be signs of possible bacterial infection.
Click to expand...

Update: it's developed a red blotch on its belly and it's having pretty bad trouble swimming. It's the only one currently displaying signs of illness, but I've put it in the QT anyway.

Quarantine tank is a 10 gallon tub, with a sponge filter, some leftover floating plants and bits of hornwort, and a heater in it. I've added a fine filter pad and some old media from the AQ 50 (I don't use the carbon insert and have just filled it with ceramic rings and extra sponge) to it.

Thanks for the suggestions @alto - I'll treat the obviously ill one in the QT tank, and suppose I'll treat the main tank with Ich-X anyway as a preventative measure. Any opinions on using the praziquantel+metronidazole? It advertises itself as good for wasting disease.
Last edited: 19 Sep 2020
A

I do like Prazi/Metronidazole as a combination medication - but as ich tends to be so prevelant and is so much more amenable to treatment when treated early, I tend to choose IchX or similar as a first treatment

Without visible white spots, chances are a 2-3day treatment will be effective against many external parasites (note that some are more sensitive to Formalin than the dye medications)

If you notice an increase in fish activity/food response, especially less “hiding”, then it’s easy to determine that medicating was a good choice - and complete a medication course (usually 3-5 days)

If fish seem much the same after 24h treatment, it becomes more subject to interpretation


veerserif said:
but it is still reading off-the-charts nitrites.
Click to expand...

This seems odd if all you’ve done is added tap water?
If you have added ammonia etc in an attempt to “cycle” the aquarium, perform a couple 90% water changes to remove nitrites
You can also add salt to help block nitrite poisoning BUT this is usually contraindicated with Corydoras, especially Pygmy cories

If you have Prime, you can also add a 5X dose, then a second 5X dose after a couple hours
(There’s a good chance this much Prime will interfere/affect any nitrogen tests, so take the results with some skepticism ... Seachem has more on this but the Discussion Board is still showing Unavailable when I just looked so you might email tech support)

I wound up just doing a 80% water change before adding the cory to the QT. To no avail, I fear, it's completely not moving at all and I'm fairly certain it's dead. I'll leave it overnight, but I don't have high hopes. Off to do a big water change in the main tank and then to do an IchX dose in the hopes of treating the others.
A

I love data such as this

However, the same assumption existed for formalin, another drug used in marine aquarium systems, but a recent study indicated that these assumptions for formalin were largely false. Formalin is often prescribed as a 5-day bath treatment, but investigation showed that concentrations decreased below detectable limits in as few as 4 h
Click to expand...

This treatment is suitable for fresh and saltwater aquariums, and will not discolor the water.
Click to expand...

This article really is entertaining
https://www.ncbi.nlm.nih.gov/pmc/articles/PMC4824874/

Not to single out Fritz Aquatics, they are certainly no more guilty than the rest (and better than some) - and I suspect they adhere to all industry guidelines

if marine aquarium systems are being treated with a bath of PZQ, it is important that the drug concentration is monitored throughout the treatment to ensure that therapeutic levels are being maintained. Further, in mature systems and systems that have experienced PZQ in the past, the rate of degradation may only increase, leading to non-detectable levels after as few as two days. Future studies which aid in a better understanding of the minimum effective dose for treating various parasitic infections and infestations would greatly benefit this field and PZQ users worldwide.
Click to expand...

An update. The cory in QT didn't make it, and after the overnight IchX one of the espei rasboras also died. However, the surviving 9 rasboras and 7 cories were as active as I've ever seen them this morning, schooling together and showing plenty of foraging behaviour. I'm going to dose IchX for another day or two following the recommended instructions.
You must log in or register to reply here.
Similar threads