I’ve been running a macro algae/soft coral/mangrove tank for almost a year now, but Instagram lured me away from Ukaps so it never had a thread until today.
How the tank looks now: 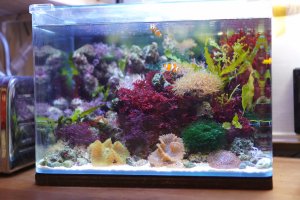 Equipment:
Dennerle 35l scapers tank. (Upgrade from 17l AG low iron tank).
Kessil a80 tuna blue light (new replacement for a failed secondhand one).
Kessil controller (also runs a tuna sun a80 on the other side of the boat).
Eheim surface skimmer, with top removed -acting as a circulator. It has a 3d printed (eBay) random flow nozzle attached and is directed towards the surface.
50w aquael heater.
Real Reef rock (ie. not real reef rock).
Gravity ATO (eBay fitting and a plastic bottle) -did have a sensor and pump based one but it failed one too many times.

Inverts:
Large Feather duster.
Pulsing Xenia (so far the most troublesome and picky soft coral I’ve tried, though it is a weed for many).
7x tiny Rhodactis Indosinensis mushrooms (from eBay -very small when they arrived though they can get big if they are the right species)
Small frag of Toadstool leather (cut down from one that was too large for the tank).
Green Star Polyp (grown from two small eBay frags, now lots).
Rhodactis Rhodastoma (I think - the clowns have begun to host this one, although it doesn’t like it).
Neon green Rhodactis.
Un-named brown and purple Rhodactis mushroom.
2x red-legged hermit crabs.
Last edited: 15 Jun 2021
Tanks: Mangrovium Monstronarium ii
Monstronarium (Finished)
Crypt's Palace (finished) Roots and Lava v2 (finished).
Instagram: monstronarium

I forgot to mention that this tank and my two other freshwater planted tanks live on a riverboat on a sidestream of the Thames in South Oxford.
Tanks: Mangrovium Monstronarium ii
Monstronarium (Finished)
Crypt's Palace (finished) Roots and Lava v2 (finished).
Instagram: monstronarium 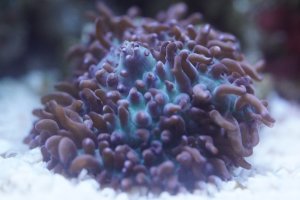 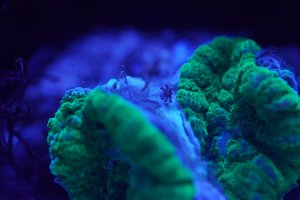 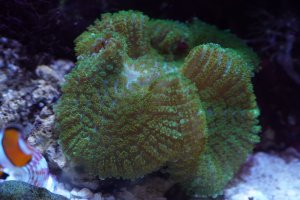 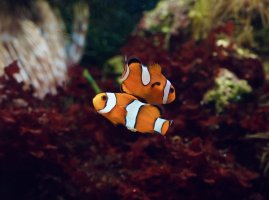 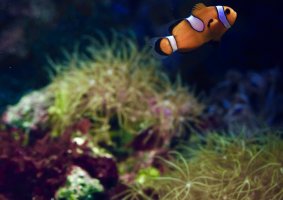 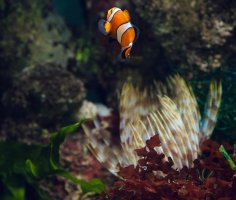 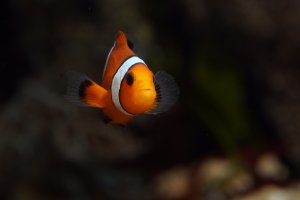 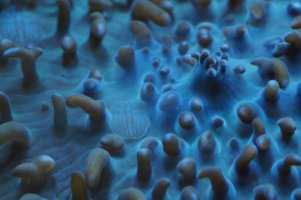 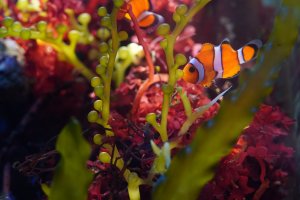 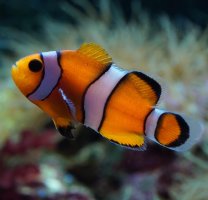 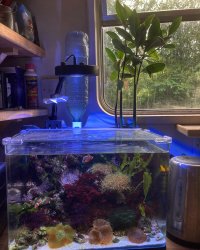 Joel S said:
live on a riverboat on a sidestream of the Thames in South Oxford.
Click to expand...

Beautiful tank. We need a house tour next!

Absolutely beautiful tanks (love the two freshwaters in the other thread too) !! I desperately want to try a macroalgae/mangrove tank, they just always look so beautiful, and it's fantastic that you can keep them as nanos. Is it easy to source the macroalgaes in the UK?

Also love that you live on a houseboat, your world is surrounded by water!! Can you use water from the river to do waterchanges on the planted tanks?

Thanks! It was relatively easy to source macro algae when I set up the tank, but at the moment there seems to be less about. I used eBay and a site called livealgae.co.uk but livealgae seems to have no stock the last several months.

The tap water here is pretty bad (hard and dirty and sometimes with mystery chemicals) but I think the river water is probably worse. At the moment I use the tap water for the freshwater tanks and I change twice a week with lots of prime dechlorinator. I used to use half RO half tap, and sometimes rainwater. I’m considering going back to this, not because the tap water is bad for plants but I’d like to try blackwater and some softer water loving fish. Already I’m lugging RO around for the Mangrovium (just 1.5l a week top off plus 2.5l a week waterchange) though and don’t really want to have to lug more...
Last edited: 8 Jun 2021
Tanks: Mangrovium Monstronarium ii
Monstronarium (Finished)
Crypt's Palace (finished) Roots and Lava v2 (finished).
Instagram: monstronarium

I'm never going to run a marine tank (unless I move to the W. Coast of the UK with access to clean, full salinity sea water), but if I was I would go for either @foxfish's cold water rockpool setup, or a <"Mangrove/Algae"> filtered tank.

A few pics from the first 10 months of the mangrovium. And the original mangrove propagules which I grew in freshwater for a year and a half before transitioning them to saltwater over a couple of weeks. 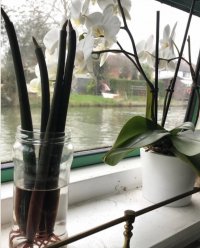 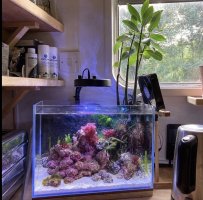 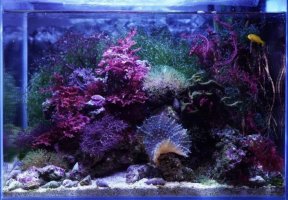 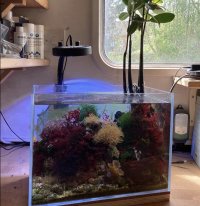 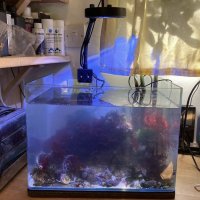 I'm never going to run a marine tank (unless I move to the W. Coast of the UK with access to clean, full salinity sea water), but if I was I would go for either @foxfish's cold water rockpool setup, or a <"Mangrove/Algae"> filtered tank.

Apart from a period when the saltwater I was getting from the local Maidenhead had extra high nitrates (I mix my own now with Tropic Marin Bio Actif salt), the mangroves and algae have meant that I have to dose nitrate and phosphate daily to stop the nutrients from bottoming out at zero (which led to dinoflagellate bloom until I got the dosing worked out -replaced by flatworms which I am still dealing with).

I’m using Easy life freshwater Nitro and Phosphate and Brightwell Chaetogrow trace elements and the last few days have tried out mixing them together in the right ratio so I can put a simple 2mm pipette worth in each morning.
Tanks: Mangrovium Monstronarium ii
Monstronarium (Finished)
Crypt's Palace (finished) Roots and Lava v2 (finished).
Instagram: monstronarium

I’m having to constantly remove flatworms and bubble algae. Otherwise fine and happy after a small water-change. The mushroom that I thought was sick seems just to be splitting down the middle instead. 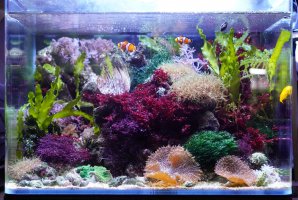 Loving this journal! It's making me want to setup a macro algae tank even more, especially knowing that it's somewhat accessible in the UK!

Joel S said:
I’m having to constantly remove flatworms and bubble algae. Otherwise fine and happy after a small water-change. The mushroom that I thought was sick seems just to be splitting down the middle instead.

have you tried an emerald crab to eat the bubbles?
the ex marine sumped cube

not called Bob said:
have you tried an emerald crab to eat the bubbles?
Click to expand...

I looked into it but am concerned that an emerald crab is likely to be just as partial to my other macro algae...
Tanks: Mangrovium Monstronarium ii
Monstronarium (Finished)
Crypt's Palace (finished) Roots and Lava v2 (finished).
Instagram: monstronarium

Yesterday marked a year of keeping a saltwater tank! (After 25-ish of freshwater)

I’ve learned a lot. The only thing I’ve rather failed with so far has been Sexy Shrimp and Hermit crabs. I think perhaps they weren’t getting enough food (and the tank may not have been stable enough when I had the shrimp). I’ve had a difficult time getting Xenia to thrive, but at the moment it is (raised magnesium has been the key). Some macro algae has done better than others, but enough to be pretty lush. The mangroves seem to thrive on natural sunlight.

Temperature is the battle at the moment, but multiple fans and the occasional beer are keeping it in check. Two litres of top off RO a day mind... 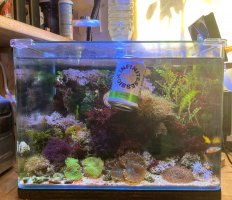 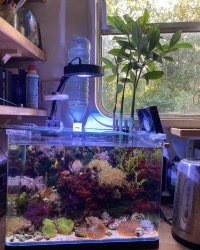 Amazing tank, seeing this makes it so tempting to try... beautiful!

seems for most Xenia is either a weed and smothers all life, or it just never settles and fades out.

mushrooms when happy, will grow and split at a surprising speed

I think the softies are very easy to keep, the algae besides stuff like cheato often needs you you to go down the iodine dosing route to keep it happy

have you sat there after dark with a red-light and had a look for the various hitch kickers you will get with frags and live rock?
the ex marine sumped cube

The Xenia in this tank started out unsettled and faded back, but got a lot happier once I had the water a little more stable, particularly after (though it could be coincidence) raising magnesium and keeping it up, and also moving to a better RO source and Bio Actif salt. Now it pulses but grows fairly slowly, certainly not smothering stuff. The oldest frag went from 20-ish heads to 4, and then back up to around 20 over about 3 months.

I did think about dosing iodine, but never got round to getting the needed test kits. Most macros have done well. They do go through phases though. I dose phosphate and chaetogrow. I was dosing nitrate but since adding daily phytoplankton (for the feather worm in particular) and feeding the clowns enough I no longer do.

I had a few hitchhikers early on, but there actually isn’t a great variety in this tank now. A few kinds of pods and smaller snails
Tanks: Mangrovium Monstronarium ii
Monstronarium (Finished)
Crypt's Palace (finished) Roots and Lava v2 (finished).
Instagram: monstronarium 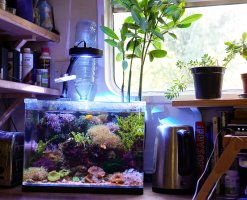 I was wrong about hitchhikers earlier btw. There is at least one decent sized bristleworm in there, though I’ve only seen it the once.

I returned the larger of my two clownfish. It was becoming clear that she was becoming a dominant female and that in such a small tank the smaller fish would not survive their pairing.
Tanks: Mangrovium Monstronarium ii
Monstronarium (Finished)
Crypt's Palace (finished) Roots and Lava v2 (finished).
Instagram: monstronarium
You must log in or register to reply here.
Share:
Facebook Twitter Reddit Pinterest Tumblr WhatsApp Email Share Link