This is my newly planted set-up having never post on here before, thought it was about time. The revamp came about due to an attack of the slime! Also I wanted to use a plant substrate. Ive used 4.8kg of SERA DEPOT with normal aquarium gravel on top and will be dosing with Easylife and Easycarbo. 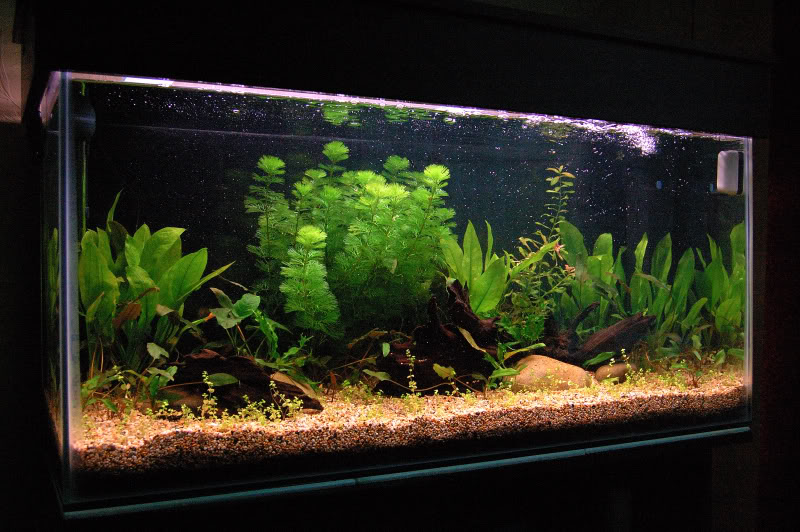 Its now been running for one week, cycling for four before adding inmates.

Think the amount of light will be slightly on the low side. Be prepared to take time for the tank to fill out.
A

what ferts are you dosing & any CO2?

What is the foreground plant, is that the bacopa?

what ferts are you dosing & any CO2?

What is the foreground plant, is that the bacopa?
Click to expand...

Martinspuddle said:
and will be dosing with Easylife and Easycarbo.
PLANTS:
Bacopa australis
Click to expand...

Never seen Bacopa Australis used as a foreground plant before... Mine grows crazy tall. Good luck with it, looking nice

Back in Feburary, I decided to reaquascape and replant my 130 lt. I had a few hic ups on the way and was'nt happy with the layout... Its all your fault you lot, your aquascapes look better that mine.

The Cabomba caroliniana had gone wild, but for some unknown reason the Bacopa australis did'nt do well at all, lighting I think was the issue. Tried uping the lighting with a Juwel colour T8 tube and added some 'Cuba' but that got covered in slime algae and also died.
First, I removed the gravel and pushed back the Sera Depot, giving a 3'' gap along the front. Was'nt going to use a carpeting plant, so I wanted to make sure there was no chance of an algae issue along the front of the tank.

Removed the background, think it looks better, although the lemon colour wallpaper does tend to make it look a bit on the yellow side.

Now fitted since last month with a Fluval 205 with Fluval pre filter and BioMax, two 25w tubes one Juwel daylight the other replaced the Juwel colour T8 tube with a Arcarda marine white + reflectors. Ive had to use condensation trays as water was damaging the chipboard hood and does cut the light down I know.

Also moved the Java's and removed the front piece of wood with Anubias Barterii leaving just two Anubias.
Daily dosing with 5ml of Easylife and 5ml Easycarbo, no Co2 injection because I don't fast growth as I only get once a week to play about with this set-up due to working nights. Although I am thinking of using EI with dosing salts later on but will be getting advice on that subject later on.

May add a Korallia pump for extra flow but at the moment all the plants are grow ok with only some minor problems, the Red Hygrophila is looking a bit yellow in places, dosing maybe? and algae, namely staghorn, on Anubias and both species of Echinodorus, some of which could be down to flow or the use of a 70% use of RO water, and having seen posts on the forum, talking to Mike C, I may well start rejucing the use of RO altogether, in favor for 100% tap water. This maybe why I have noticed is the lack of Nitrate reading... maybe time to add NPK?

Wow... can't beleive I missed this one. What a gorgeous tank, and amazing progress from just last august! Reminds me of some of the first tanks I saw on here and TFF which impressed me so much. I'm sure you're really plaesed with it.

The P Helferi has grown very well, and thats always a good sign. You mention yellow leaves on the hygrophilia... I've read on here before that hygrophilia's are very nutrient hungry due to their fast growth rate, and so is usually the first to show insufficient nutrient levels. Even with easycarbo, you should really consider dosing some sort of NPK. You say you dose Easy Life as well, I assume you mean Easy Life ProFito? I beleive that doesnt contain any N or P. You might want to consider something like Tropica Plant Nutrition+, dose dry salts, or make your own all-in-one solution, shown here http://www.theplantedtank.co.uk/allinone.htm.

Nice tank mate
Rarely see amazon swords used well in tanks! They usually look out of proportion and strange, work really well at the back here though!

Very nice use of plants Martin.

Looking great Martin I'm liking the gravel, with the mixture of different grades. Seems to be the in thing at the moment and I really like it!

dsandson said:
Wow... can't beleive I missed this one.
Click to expand...