So, I'm looking to make an addition to my plants possibly Christmas pressies.

I love the look of this plant can make when planted in a massive clump like on this photo:
http://showcase.aquatic-gardeners.org/2 ... l=3&id=101

Any idea how its done?!
My Nano Journal

You put your hand in your pocket and dig deep.
They look like needle leafed java which grows pretty quick for me, you have to give the rhizome a lot of space though to get good linear growth.
Don't believe the hype.

He does it the same as I and most people do it but looks like he trims it to keep it tidy unlike me.

I would think he hasn't planted it as a clump unless it was a short life scape. With mine I stapled a few rhizomes to the wood and let it spread itself along: 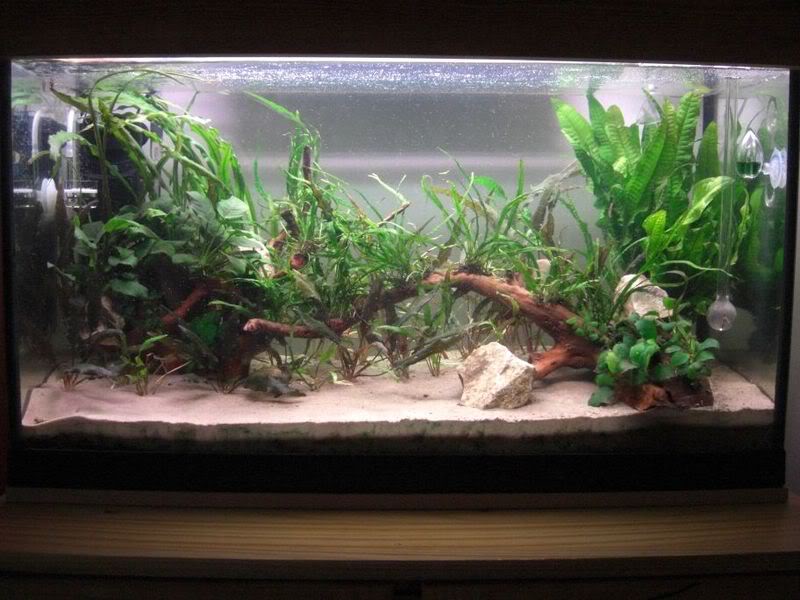 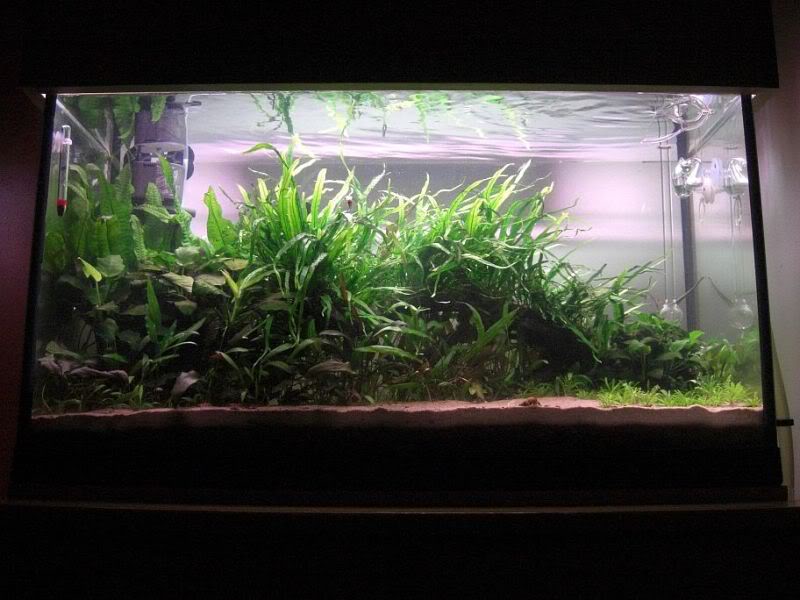 I would suggest it is needle leaf too (or Tropica may call it narrow.)

what do you mean by stapled? with a staple gun? would the staples not rust? if not it sounds alot easier than the fishing line technique!

Nick16 said:
what do you mean by stapled? with a staple gun? would the staples not rust? if not it sounds alot easier than the fishing line technique!
Click to expand...

The staples rust eventually but cause no harm and the plants have rooted long before then anyway. It just doesn't work very well on rocks...

Wow, so it'll grow rather quick.
So I'd need a horizontal piece of wood to stick it on to form a decent clump.
My wood goes upwards (ooo-err mrs!) I think I might rearrange it.
My Nano Journal

yes I used a heavy duty stapler because I was in a rush. lol

The staples are still shiny at the moment if I look closely to see them.

As you can see from mine there is 4 months from the first pic to the second and some are stapled on vertical pieces so don't worry how your wood is positioned. Get the hardscape right, then staple/attach the rhizomes and then wait for a few months for it to fill.

Each clump you see in the first pic is approx 10-15 leaves, several rhizomes each.

do you staple your anubias as well? i take it they are massive staples? i might try it!

Think I'll give it a go and also get some unusual crypts at the same time like crypt. retrospiralis
My Nano Journal

I usually use rubber bands to attach everything but when I set this one up there was so much non-substrate based plants that I stapled them on.

Still took about half an hour to get the lot on there but would've taken a few hours to thread rhizomes through elastic bands and then hope they didn't slip. Thread is just as bad sometimes especially trying to make sure there are no knots.

Don't worry if the staple digs into the rhizome. Just like trees that are banded to poles the plant will not be harmed by a restriction. Some Rhizomes may snap whilst doing it in which case just do it again as 2 seperates

The best thing I found is that doing them this way they don't come loose, and they are rock steady in their positioning, no having to hold things while getting thread tight and then watching them slip when you let go. Its a case of staple and it ain't moving. Once the plant has been there a while the staple is invisible as with the ferns the roots cover it and Anubias leaves get so thick that you can see most of the rhizome.

Can you spot the staples? This is the only one I could spot that isn't hidden yet. Still shiny silver after 4 months submerged!!! 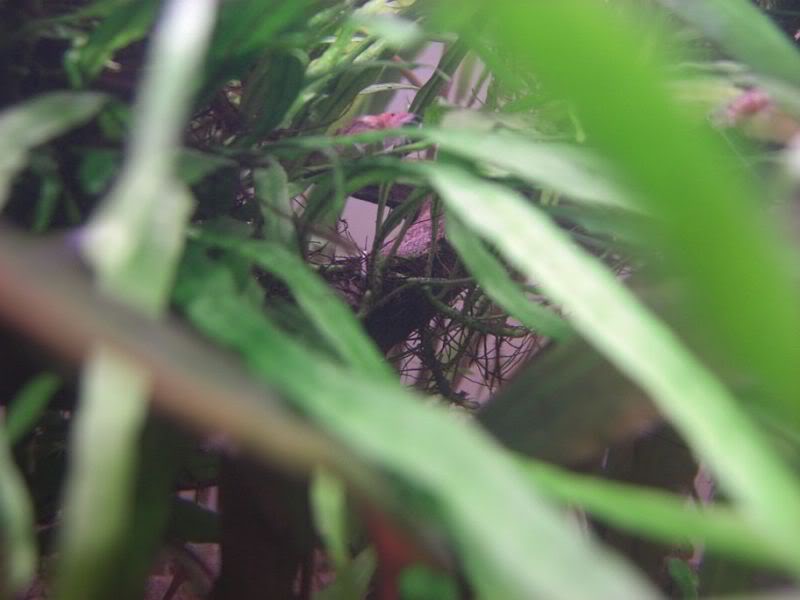 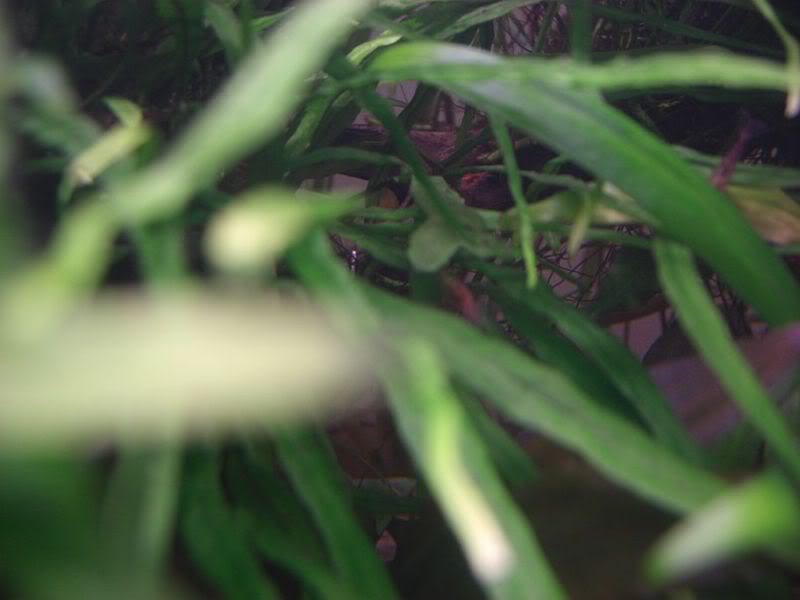 SuperColey1 said:
Just like trees that are banded to poles the plant will not be harmed by a restriction.
Click to expand...

Actually those bands if fitted incorrectly can kill trees by circling the bark. Once the bark has gone from a section then the tree often succumbs, especially if newly planted. You should check tree bands regularly to make sure they aren't too tight and damaging the bark.

With aquatic plants and rhizomes a restriction can cause the rhizome to split, but usually that just means two smaller plants so it's not too bad.
Ed

Thats what I meant but was trying to simplify

Bought some today, but the plants I got were rather large!
Hopefully it'll develop like yours.
My Nano Journal

Hack off about half the leaves before planting them. You'll find it much easier if you manage to get strips of rhizome rather than the "mass" you tend to get too.
Don't believe the hype.

Thanks Garuf, although my leaves are large rather than plant mass. I've tried to split the leaves up as much as possible.
At least the large leaves causes an impact straight away!
I'll post photos tomorrow
My Nano Journal

SuperColey1 said:
I usually use rubber bands to attach everything but when I set this one up there was so much non-substrate based plants that I stapled them on.
Click to expand...

SuperColey, you are a genius and I bow before your brilliance. 8)
I find trying to tie these rhizomes to wood quite the worst thing about planted tanks.
---
Ray
Always learning ... [Active] 10l nano DSM See my 200L 90cm tank journal... See the rescape of that 90cm

The reason I say remove the leaves now is because they die ( removing them encourages rapid new growth) and it's so much easier to remove them when they're not attached to anything than when they are.
Don't believe the hype.

I agree with Garuf r.e. dieing although I tend to leave the leaves on.

I find that with Anubias and Ferns that until the rhizome attaches to its hardscape it tends to suffer a little for some reason. Anubias are very strong and can recover whereas ferns leaves are holey and disintegrating by the time they attach. Keep an eye out once they start to die off and you leave them in theses plants are algae magnets as they also trap anything else like fishnets. They need to be gotten out of the tank ASAP when you see them 'blotching'.

My rhizomes have been in 2 scapes and 'died' twice before coming back to what they are now. I would guess if I saved what I have had to pull out (yellow or holey etc.) I would probs have 4-5 times as much mass as there is currently in the tank.

My leaves are covered in new plantlets.
I'm waiting for them to develop as big as possible before removing and attaching to the wood. Is that correct? As they seem to be growing the rhizome is getting bigger whilst they're attached..
My Nano Journal