Weelllll, it started to be a quick entry, then I fleshed it out a bit (it is a journal after all... ) it's just a bit of a brain-dump really

The tank might not be quite up to your exacting standards (liking the Nano btw!) after the rapid second un-planned replant some things have just been put back in as best as I could at the time, I'll be redoing that a bit over the next week.

lets have some pics of these plants and the setup

As promised, sorry it's a bit later than expected, my fiancÃ©e had the lurgy so I had to look after her, then do a water change and re-plant the loose stems, but finally, after much waiting for plant orders to arrive over the last few weeks, here are all the details of my tank setup that I undertook last night.

I also got some tweezers after reading that they'd be helpful planting and looking at tropica's very helpful planting video on their website and seeing just how necessary they'd be. As I was planting dry, other essentials for the planting were a water spray bottle for keeping the plants damp and a towel to mop up spills as I filled the tank.

And, here's the bare tank with the hard-scape: 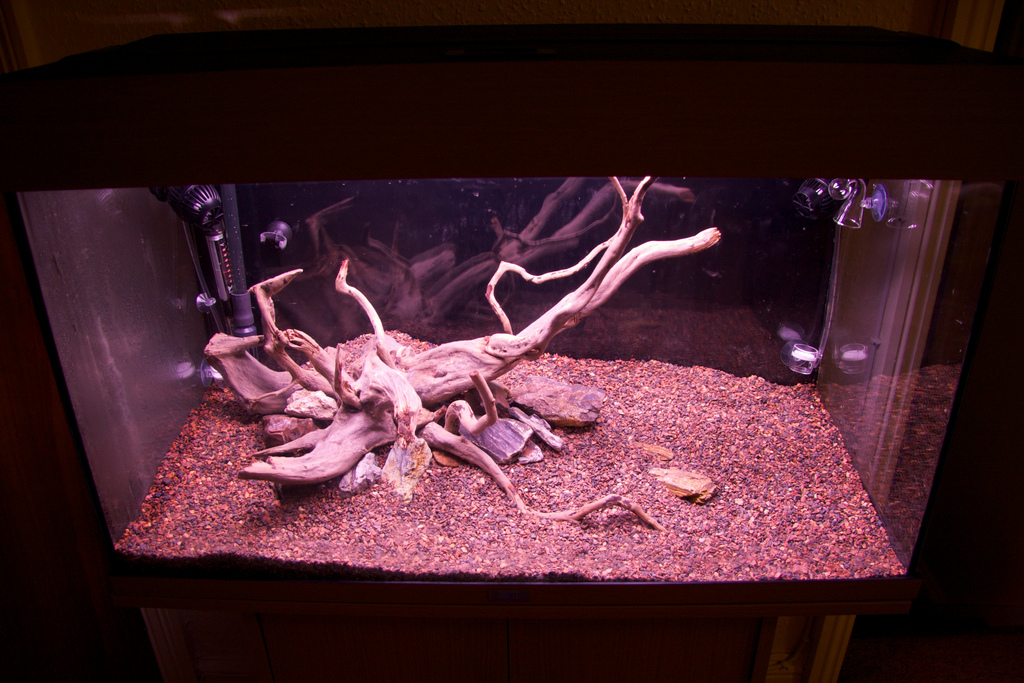 I wanted to create a carpet-effect over the right-hand foreground with sand in the front right corner, the wood would have a lot of Java Fern, Crypts would be around the base of the root and some larger plant behind the root. I also wanted to try and experiment with hairgrass as a carpet, this I decided to do in the front-left corner, so first I added the sand: 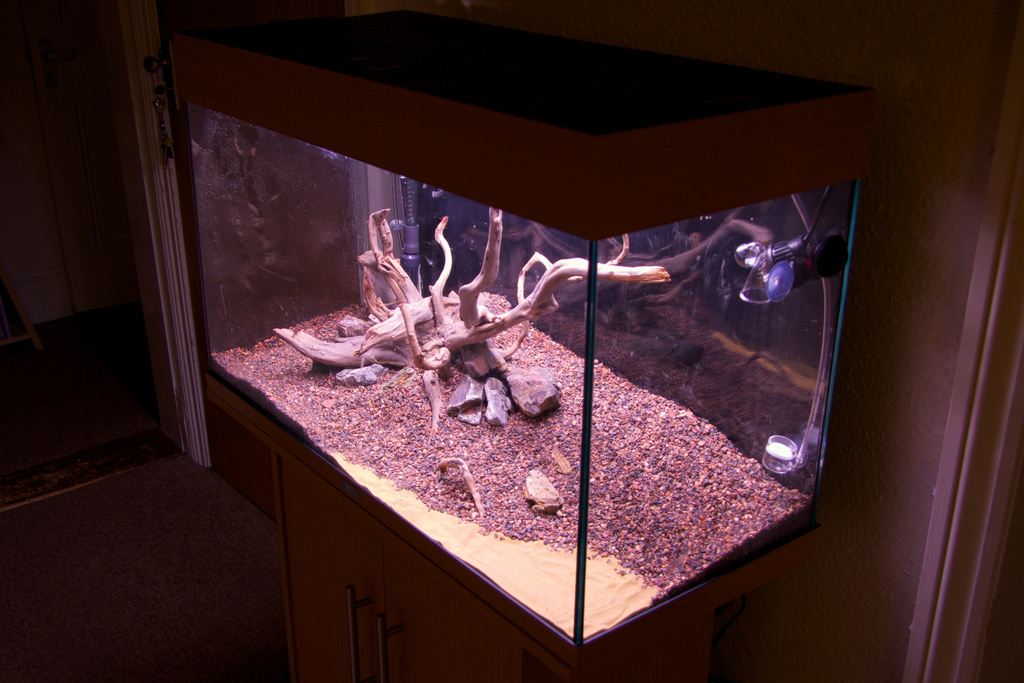 Next, the Java Fern, this I wedged in as I wasn't sure about it's placement just yet: 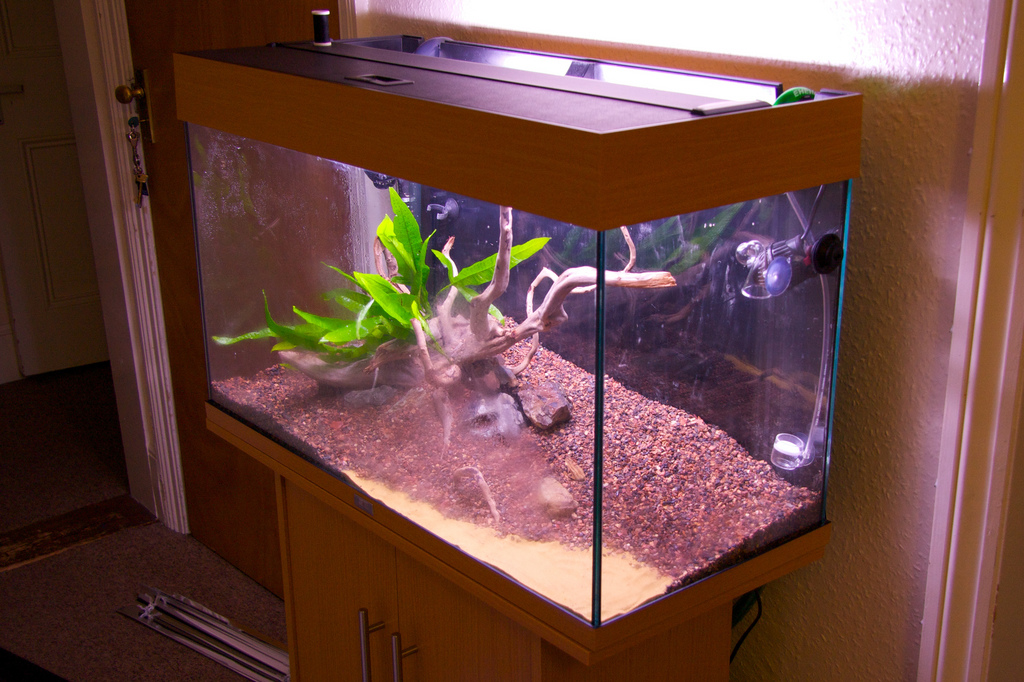 Then after spraying the fern down, I started on the Ambulia Aquatica and the Micranthemum Umbrosum: 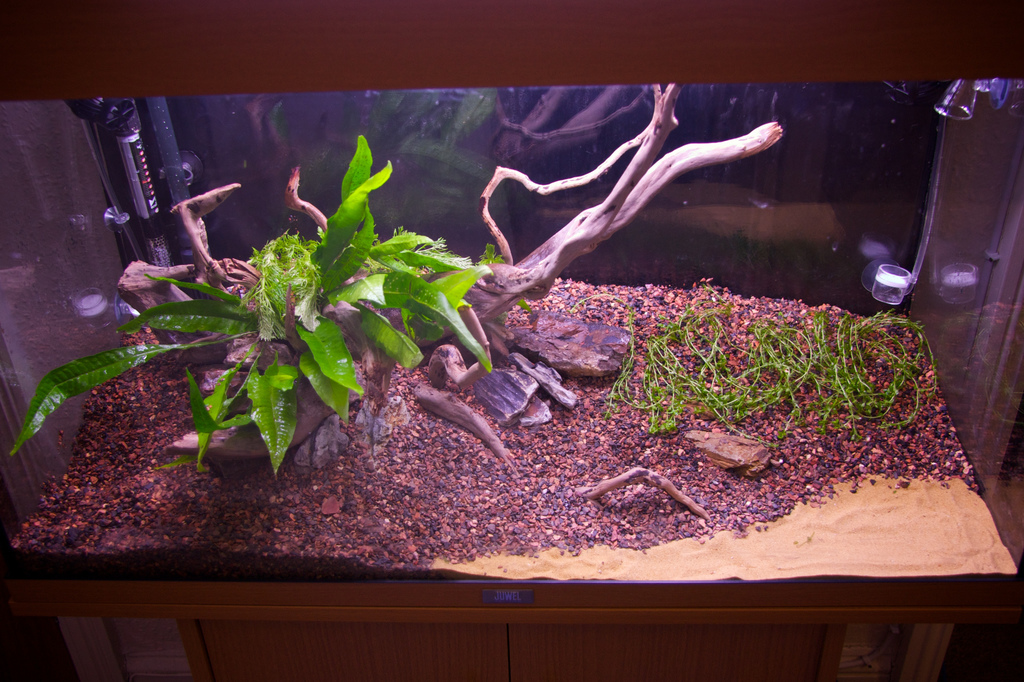 This is when I realised that it might have been better to do the foreground first, when I started to put in the stem plants that were going to come in front of the Micranthemum Umbrosum, the Didiplis Diandra and Small Helzine. The stems had been laid down, but I had to move them to get a space to plant. After planting these, the HC, the pogo and the crypts the tank was planted: 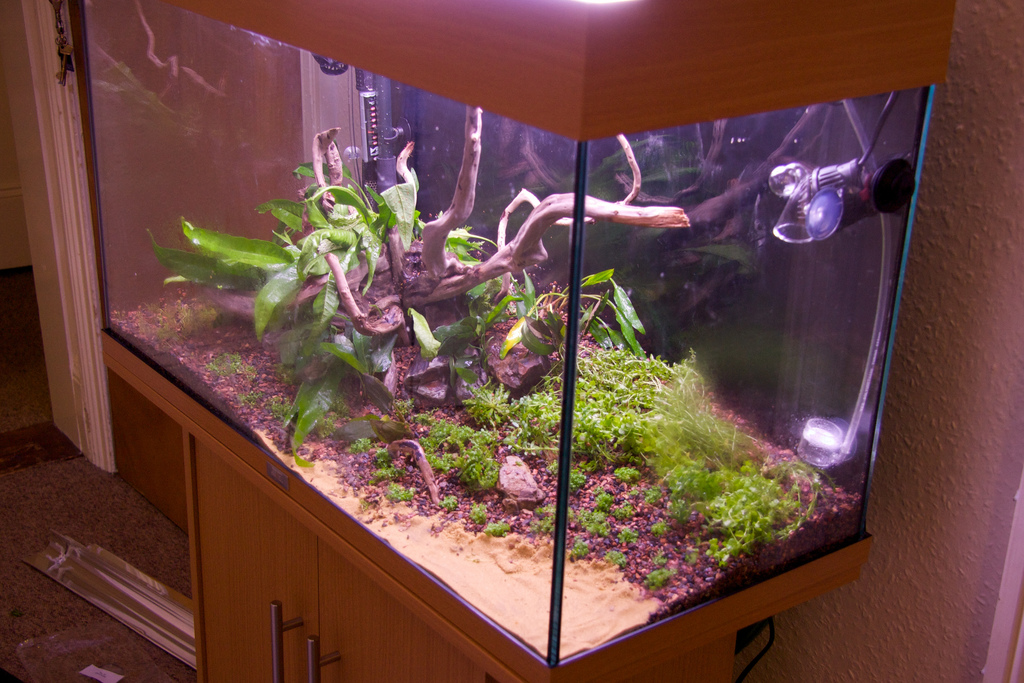 I ended up with a little surplus, one Rorippa Aquatica has gone in my cube along with some of the HC sheet and one Pogo. The second HC sheet is unused and is currently sitting on my sand-patch recovering from it's ordeal from it's journey (that'll be put on the for sale/swap section later).

The Filling
So finally, the filling! At this point it was starting to get late, so there aren't any photos of this bit, I placed a side-plate on the sand and a little on the HC in the corner, then I balanced a round bowl on that and aimed the flow into the bowl, the shape caused the eddys to deflect upwards and nothing got disturbed!

I got to about half full when a minor disaster struck, the wood had been waiting for so long that it'd started to dry out and it started to lift from the substrate... Argh! I grabbed a large rock and rushed back to weigh it down, this worked but it was a little late and I had to replant all the fern and many crypts again as they'd been pushed free by the escaping tree-root.

Crisis averted I continued to fill the tank, primed the filter (which has been 2/3rds filled with Sintered Glass Eheim media) and started the Koralias, so much flow! From watching the CO2 bubbles I think the flow is somewhat like this pic: 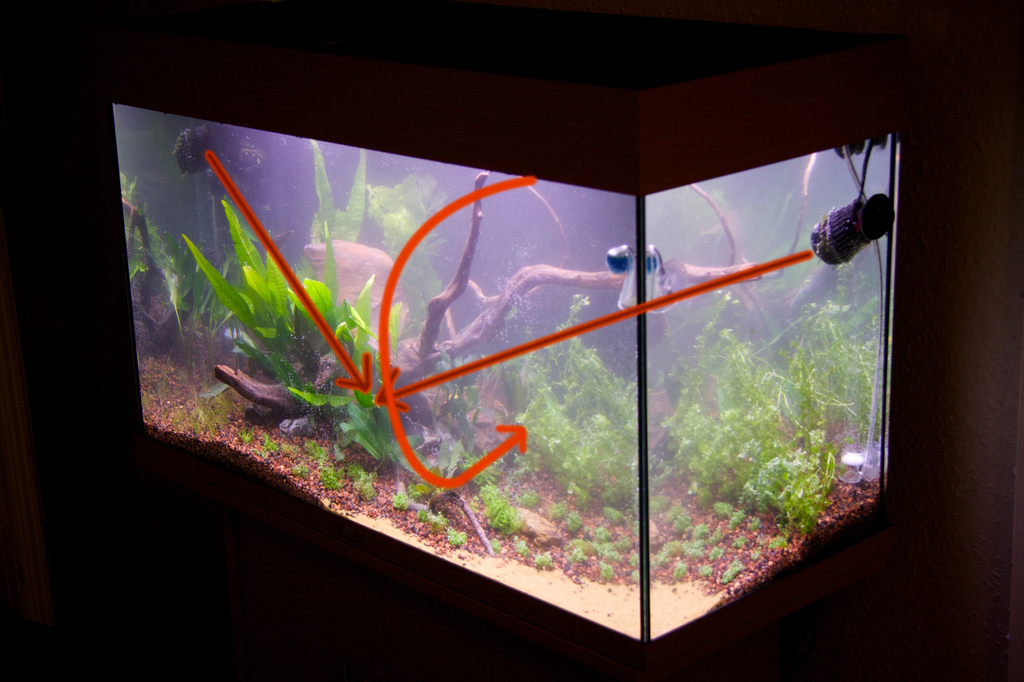 The (initially) Finished Tank
Here's a pic of the tank with all it's plants in: 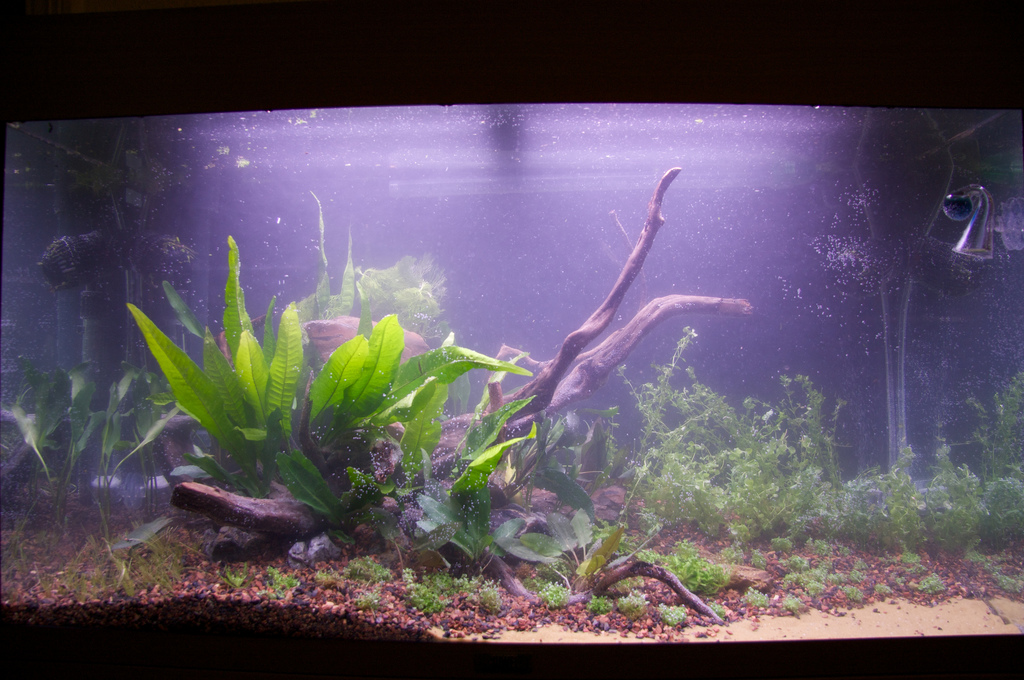 CO2 comes from a JBL Profi 2, split to two ceramic CO2 diffusers below both hydor koralia pumps. I'm currently adding surplus CO2 to give the plants a bit more of a nice environment and to let them grow as quickly as possible before I add fish in. Once I get my bubble checker in the line, I'll start to dial the CO2 back a bit so that it's nicely lime-green coloured. The CO2 is on a solenoid and comes on 30mins before lights on and switches off 30mins before lights off.

Fertilization is at the moment done with TPN+ (5ml daily as-per tutorial article) but I'll be moving to DIY TPN+ (cheers Paulo for the advice regarding measurement) and a dosing pump in the near-future (when I get the pump wired up, and I can get some accurate scales to measure the chemicals out).

Currently doing daily water changes of 50% for the next week.

Here's a few more pics of the tank: 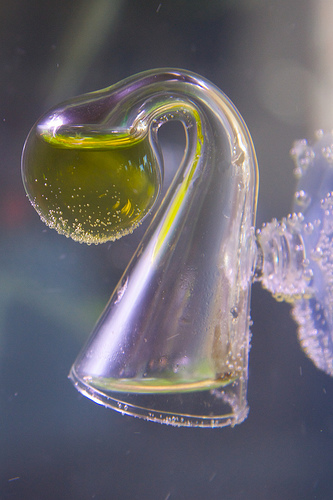 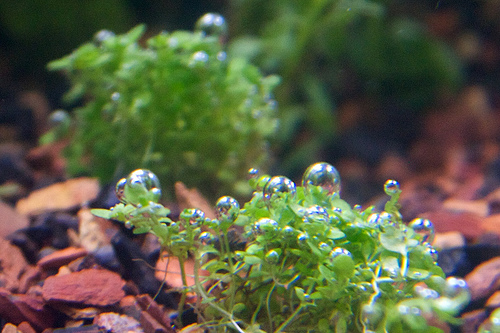 Finally, a pic from tonight showing the water is beginning to clear: 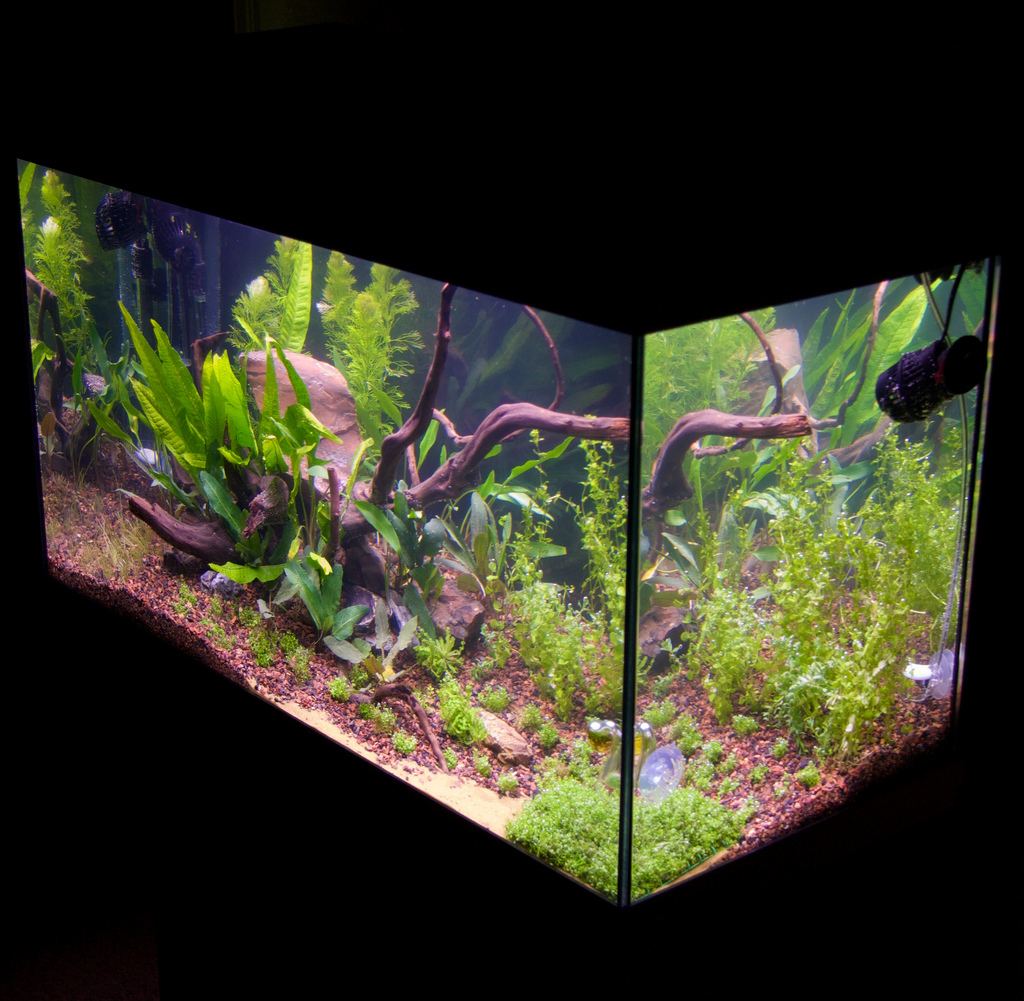 Hope you like the update, I'll keep you updated as to my progress and keep you apprised as to any algae situation if/when it occurs.

I'm not too sure about the Java Fern, it looks too big in the tank, might replace it with the narrow variety later on, and I'd like to try some christmas moss on the wood at some point. The big rock on the wood will be removed as soon as I think the wood's soaked enough to avoid it floating again.

I'm still learning, so if you think I've done anything wrong or you know of any handy hints please feel free to let me know.

Looks great to me Matt

I'd tend to agree about the java fern looking big, but once the rest of the stems and crypts have grown in it'll fit in better.

Brilliant write up Matt. That wood composition is great! I wish Redmoor wasn't so floaty

It looks like a good start you've got there

I think it's looking ok so far, I think I'll need to do some tweaking depending on how the stems grow on the right, and I'm not entirely happy with the Java Fern still, although the fiancÃ©e loves it.

Just spending all my time working on waterchanges at the moment and chasing loose stems around trying to replant them, I wonder how long it'll take before that'll stop and they put down roots? I think I'll save my Â£10 voucher for when I redo the nano cube eventually (might put that on another journal at some point maybe) or if the hairgrass doesn't work out and I need to replant that corner with HC, some more pogo or some other foreground plant.

The only slightly pressing issue is that the Y connector on the CO2 hose isn't working quite right, the flow is tending to go to the right-hand diffuser, this was a known risk as gas will always try and follow the easiest path but I wasn't expecting quite such an imbalance as the angles and tube length are similar for both diffusers.

I might have to get a couple of valves for both lines so that I can add resistance to one line to balance the flow?

I'm having the same problem with my Y connector too. I have a couple of needle valves I could use, but it's only a temporary setup so I haven't bothered. I put it down to differing lengths of CO2 tubing, but I guess it could also be down to the quality of the ceramic diffuser, one being a little less dense or something?
--------------------------
Flickr photostream.

I would definitely put a valve on each line. Afaik it is the only way that you can control what is going where. Given the inmportance of stable CO2 I think that having that control is near enough essential.

The tanks looking good by the way :thumbs up smiley here:
M

SteveUK said:
I guess it could also be down to the quality of the ceramic diffuser, one being a little less dense or something?
Click to expand...

Yep, I'm inclined to believe it's down to the differing quality of the diffuser too, the right-hand one definitely produces larger bubbles than the left. Cheers Matt, I'll look into getting a couple of needle-valves for the hose.

Currently it's not too big a problem, I'm overdosing CO2 as I've only got plants in there so there will be enough for them, but when I decide it's ready for livestock I'll have to make sure it's balanced as I won't be able to dose in such quantities with my Harlequins back in there.

Cheers Aaron! Well, that's the needle valves ordered, Aquatic Magic, Â£6.51 each, not too bad looking at the quality of them. I was VERY tempted to get some mosses at the same time, but I resisted for now, I'd better let it all grow it a bit!

i too agree the positioning of the hardscape is great. what plants are right behind the wood? to the left
M

saintly said:
i too agree the positioning of the hardscape is great. what plants are right behind the wood? to the left
Click to expand...

To the left of the Ambulia Aquatica (big bushy plant at the back right behind the root)? That's a couple of Crypts (Nevilii and Wenditii I think?) and a stray Java Fern leaf.

They're right next to the filter inlet and lefthand CO2 diffuser. They're basically holding there for now but I may move them again when I redo my nano-cube. I bought them to fill in and I quite like crypts, but they might not look quite right for the tank as it grows I think. I think there will be a period of growth, then I'll probably tweak and give it a bit of a facelift .
N

so 20 java fern only did that tiny amount? for the stuff you have in your tank i would expect 2 or 3 rhizomes at the most not 20!!!
M

Yeah, I expected something like 3-5 leaves per rhizome but most of them are individual leaves with the tiniest bit of rhizome on them

The thing that's a bit misleading is that they don't measure in bunches, but in stems, they order in lots of 5 though so it's not totally bad but it does mean I probably wouldn't order Java Fern from them again due to the way they've prepped it for shipping.

The HC mats were also very hard to split apart for planting and some bits were dead and mushy, only having one layer of wire mesh would have made it much easier, or failing that, just by itself! Good value for money quantity-wise though.

That said, the crypts are really nice and all the stems were healthy.

Nothing too much to report, the tank is algae free so far (but it's only been 2 days), everything's pearling away, but the HC's looking a little ropey, some pieces aren't very well attached to the bottom. There's a lot of dead HC on there, but there are some shoots that are green and pearling, I'm thinking of leaving it as it is until the live bits get dug into the gravel properly then I can cut away the dead matter?

Lost a couple of crypt leaves too, but that's to be expected after the trip as they tend not to like being moved, so going well so far, no sign of life in the hairgrass yet, but that's been given quite a severe trim while planting, so I think that'll be a while off yet.