Struggling a little with monte carlo in that 1) it lifts every time I trim it
2) hasn't spread well
3) Algae issues, whilst other plants dont

Personally, I prefer MC. I find DHG slow growing and takes a while to even get started. On the other hand, MC is quick growing and creates a nice carpet quickly.

This is just for me though, many people use DHG to great effect.

What are you running on the tank, ferts, co2 etc

MC as a carpet, while it grows bushier, has the same tendency as HC to overshadow its own foliage and start to melt from the bottom up. Since it roots relatively shallow and kept a bit too dense for too long then once the melt kicks in it will come off the substrate. Then with this shallow rooting, also a relatively coarse-grained and lightweight substrate will not work in its favour and it will come out a lot easier.

It's a relatively easy plant to grow, but still, it's rather demanding in care to keep it in shape. As said a bit similar to HC, it's a plant you have to trim down at the time it looks at its best to prevent the melt from the substrate up.

With hair grass, you will not have this issue , tho how well and how fast it grows is very co²/light depended. It's a relatively easy plant to grow, but for a low energy aquarium, it's not easy, since its a slow grower, to get it to carpet large areas on its own devices. Then you would need to start with a lot of plants, to begin with.

If you provide decent, co², light and flow it can grow pretty quick and dense. But then it's also prone to collect loads of substrate debris (bioload) bellow it and then likes to catch some BBA.

Thus both are as easy as demanding in its own way. To keep it nice it needs care and constant monitoring and action if needed. This is something you need to learn to see by experience, it differs from tank to tank. Neglection for a tad too long and you pay the price...
Cheers,
Marcel..
Tanks for watching.

I have DHG in my nano tank, which has high light and lots of CO₂ with good flow over the carpet plants (I also have HC Cuba).

For me the DHG has established a thick carpet quite quickly, and I have to prevent it spreading further laterally. It’s actually a little bit invasive!

It can however be trimmed to whatever height you want.
__
David

Or both with a splash of Lilaeopsis brasiliensis 'micro swords' 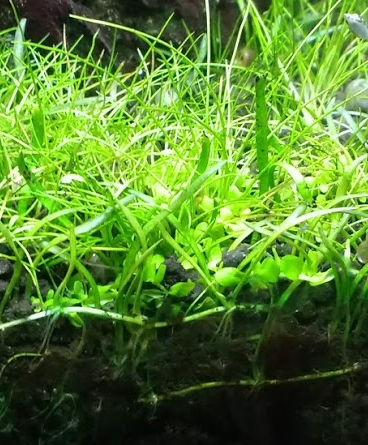 Going down the DHR route I think. I've ordered 4 plants from Aquarium Gardens. I will split ans see if they take hold.
Good stable co2 ferts and flow, so fingers crossed.

Thanks for your thoughts, everyone. Have a good week
Nigel
I'm off to bed to sulk cos Surrey lost the cricket final

Zeus. said:
Or both with a splash of Lilaeopsis brasiliensis 'micro swords'

nigel bentley said:
I'm off to bed to sulk cos Surrey lost the cricket final
Click to expand...

Bad toss to lose, but no complaints as the better team won
You must log in or register to reply here.
Similar threads