An interesting find from one of my friends last night, he sent me a picture I had taken of my planted tank 8 years ago. I had forgotten completely about it but seeing it now brings back both warm memories and a lot of amusement actually about how little I knew. 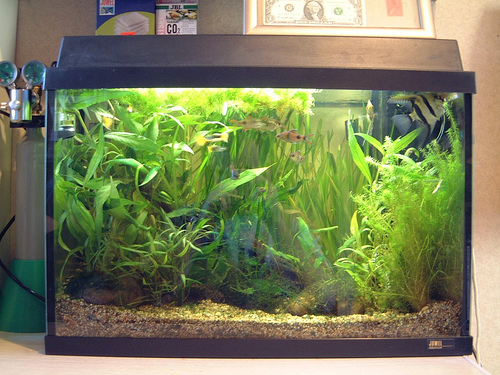 Note the plain aquarium gravel substrate but interestingly pressurised CO2 so at least I had something right! I remember that JBL CO2 set it was really good actually, can't remember what happened to it now. I think after I had this tank for a bit I got a Rio 125.

In retrospect I don't think it's that bad
http://www.specialshade.com/
http://www.flickr.com/photos/greenbrightly/

Great for a first effort mate!

Mine was filled with non-aquatics and I was scared of CO2...

I'd actually tried to do a planted tank far earlier than that, in 1993 really when I became very influenced by a tank I saw in an issue of Fishkeeping Answers. I bought a 3 foot tank and had it running with an undergravel filter and powerhead, I remember it had a bit of bogwood in it and loads of amazon swords, complete with yellowing leaves and brown spots.
http://www.specialshade.com/
http://www.flickr.com/photos/greenbrightly/
A

what size was the tank he looks a bit cramped..

still better then my first attemp

what size was the tank he looks a bit cramped..

still better then my first attemp
Click to expand...

Yeah I had to move him into my friends 3 footer where he or should I say she as it turned out bred and produced a lot of fry. She was absolutely tough as old boots and lived for years in my mates tank.
http://www.specialshade.com/
http://www.flickr.com/photos/greenbrightly/
T

When I look back at the first tank I got 5 years ago, I remember wondering my the anubias I got didn't do very well, despite me pushing it deep into the substrate after each water changes and why the leaves on my Mondo Grass (Ophiopogon japonicus var) where dieing