Oh aye, I wonder how that could be rectified?
H

maybe the light clamps mean that it's not good to fillnear the top?
Click to expand...

Also, the HOB has a 'tank water level' marker which is rather low too.

Chop the bracket of and stick the lamp to a desk lamp.
H

but then what about the HOB?

You could fill up with more water if you had a better way of mounting those lamps.
H

Nick had a good idea of siliconing small pieces of perspex to the sides, and then clamping the lamps to them - raising them up. Might try it, might not. TBH the water level doesn't really bother me that much.

Algae's getting worse, it has grown on the big rock and was actually pearling yesterday! So I scrubbed it off with a toothbrush, and it's back today although not as bad. There's also fuzzy stuff growing on the AS and a bit on the HC.

Ammonia is down to 0.1ml/l - so it's nearly gone! Once it's gone I'm going to see if I can maintain that level for a week (measuring nitrite as well), and if I can then I will be getting some cherry shrimp maybe that will help the algae.

I'm thinking of putting a couple of nerite snails in as well as the shrimp - what do people think of that idea?
H

I will try to get some pictures up soon.

The HC is growing in very nicely, and the algae growth has slowed down a lot.

The blyxa, while not growing extremely fast and really thriving, is doing alright, and staying alive. There was some initial melting, but that has stopped now. I think it's still getting itself established.

P.Helferi is thriving, although the new shoots are pale. Now, that's to do with micro nutrient deficiency isn't it? But I'm adding TPN+ at 2ml after every water change. This was every day, but since two days ago, it's been every two days. I'm wondering if the filter cartridge has carbon in it... it's the cartridge that came with the Mignon - anybody know?

I added some java moss, which is growing in nicely aswell. Although it does look a bit like someone's chucked shopping trolleys in a beautiful river, due to the steel mesh I'm using to keep it down. You'll see what I mean when I put the photos up.

Today I decided to do water changes every two days, instead of every day as things seem to be settling. As my ammonia is 0.1ml/l and my nitrite is 0.025ml/l. My ammonia has been at 0.1ml for a while now and I thought maybe my test kit was faulty, so that's why I tested the nitrite. I am STILL waiting for them both to level out at 0, and I'm getting bored waiting now!

A STRANGE THING HAPPENED!!!!!!! Today, I did my waterchange, and tonight there are small organisms. There are some tiny white swimming things, smaller than daphnia - like a head and a tail. Really really small. And there are some thin white worms, although not very many. All I can think is maybe they were living in my watering can that I used to do the water change? But I keep the can indoors, not outside? It's a red plastic one from B&Q. Any thoughts? Will the shrimp eat them when I put them in (when ammonia and nitrite are gone)?

A strange thing happened: I've found that aquasoil is loaded with creppy crawlies that appear in the set ups. I never noticed them in my sand tank or when I've stored plants in jars only ever in tanks with AS.
H

How strange - I wonder how that could be though seeing as AS is dry when you first get it? Or do the creepy crawlie eggs dry out and then 'activate' in the water?
H

Here are some pictures. The algae on the big rock looks worse in these pictures than it actually is. I haven't cleaned the rock for a week either... when the algae was at it's worst, the rock was looking how it is in these pics, after one DAY! 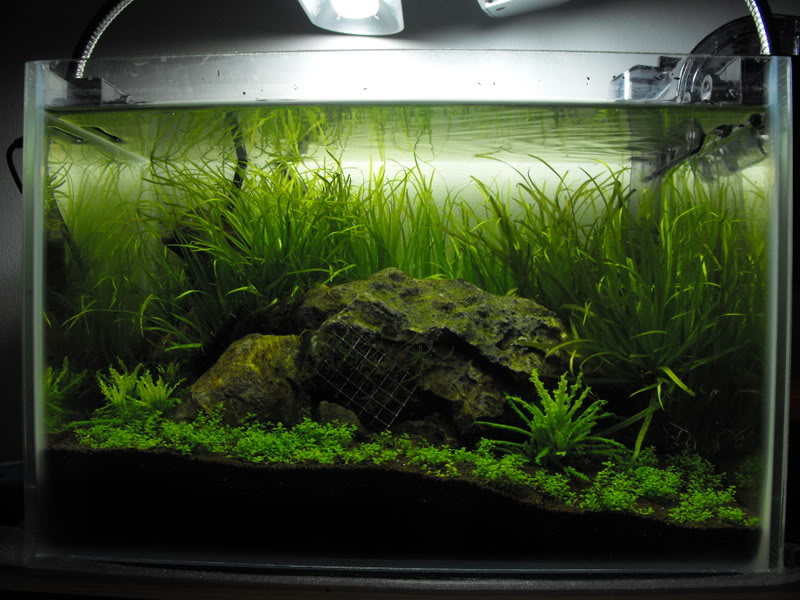 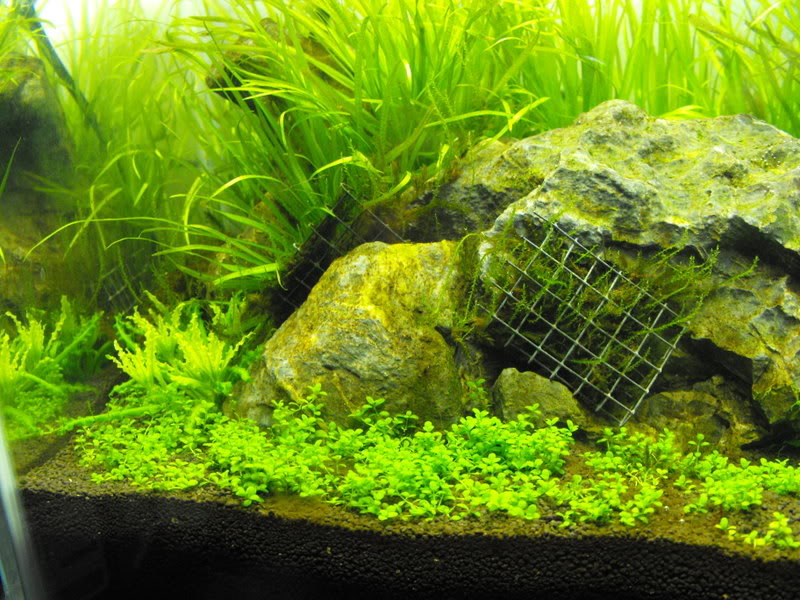 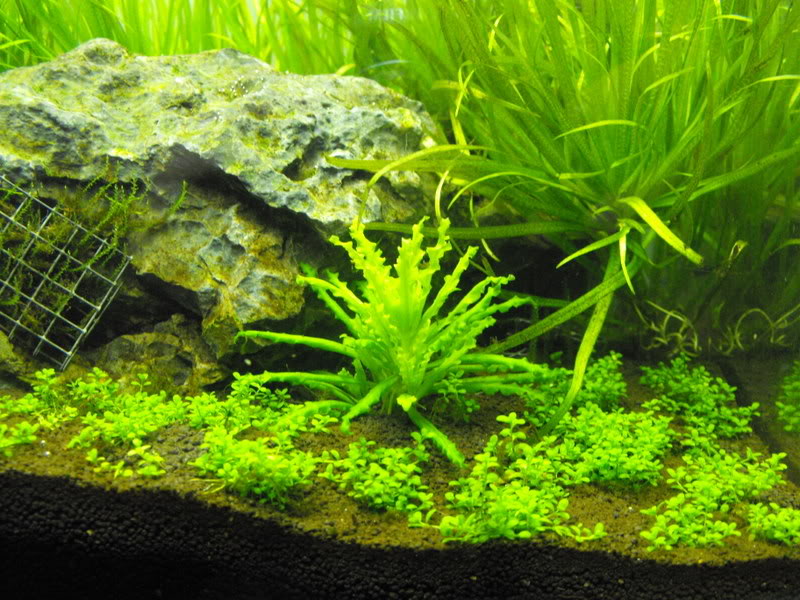 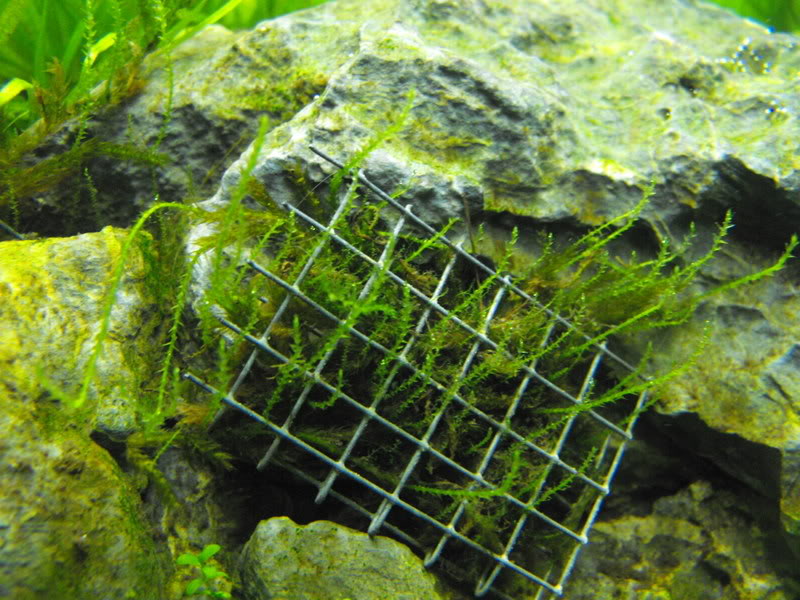 i ordered two of those lights ages ago, got one but the other never turned up, so im chasing it up, its a real pain (

) but they are good lights though imo.

thankyou! TDI - that's your blyxa in there! The rest is in my 100gal and it's doing even better than the bit in the nano! No idea why, because it's in sand! The only thing I can think of, is I'm using pressurised CO2 in the 100gal, and easycarbo in the nano.

Nick I hope your light turns up.
T

At the begining of the week I got some Nerite snails, who have settled in nicely.

I haven't changed the water for just over a week to see if the nitrite would remain stable, and I tested it today and it's between colours. It's between 0 and 0.025.

This tank has been running since January now, and I'm starting to think that maybe I simply don't have enough media in the filter? I'm going to cut up a sponge from my big tank and put it in the space in the Mignon. It will probably slow down flow, but I have quite a lot of flow anyway for such a small tank.

Ammonia is at 0, according to the test kit.

The HC and moss are growing well. P Helferi is in desparate need of a trim. Blyxa isn't doing much, but is alive and seems happy enough.

Humm I would be surprised if you didn't have enough media. It could just be a duff testing kit, as the tank should be well cycled by now.

I put in a cycled bit of media from my big tank just in case, and added shrimp (from Paulo)! They seem to be settling in nicely and are starting to colour up.

All good stuff. Here are pics, notice how the HC and moss have grown: 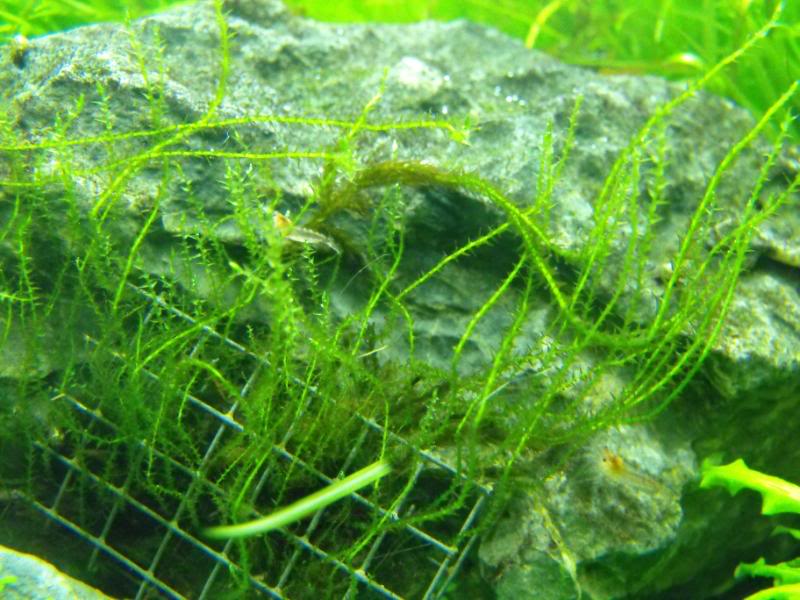 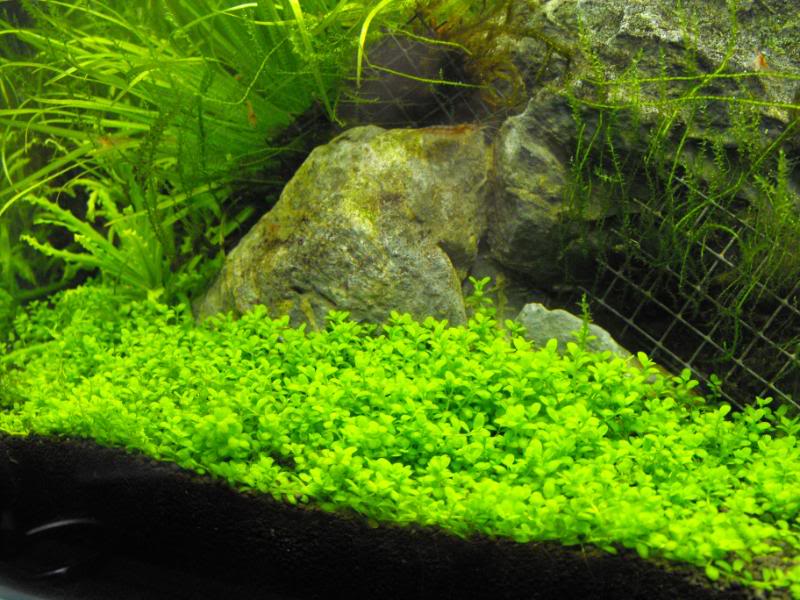 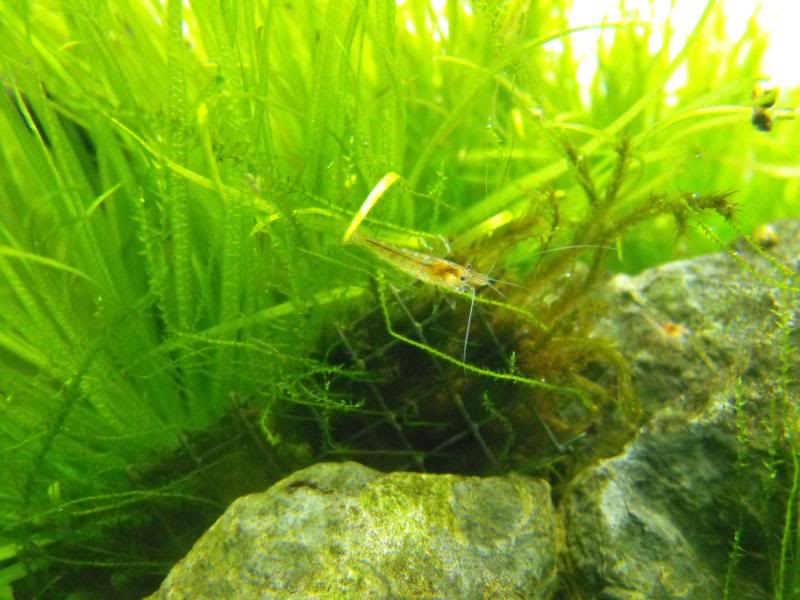 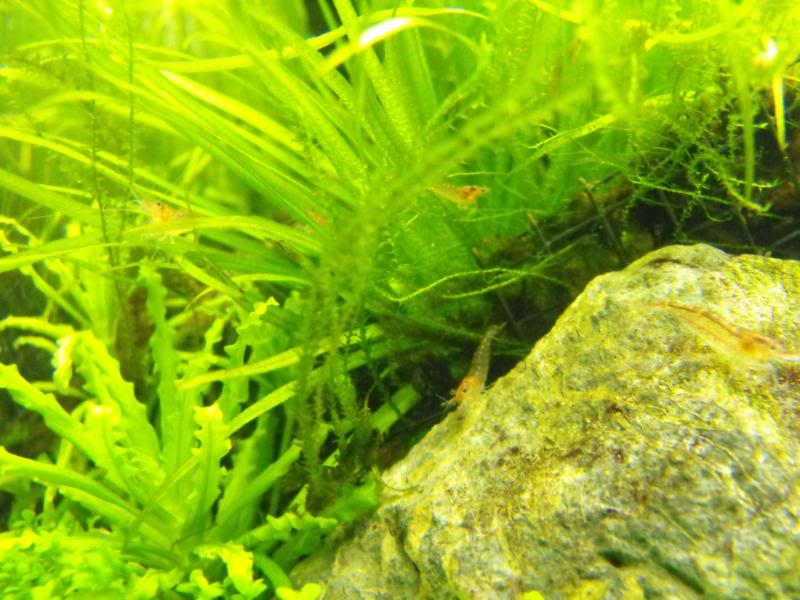 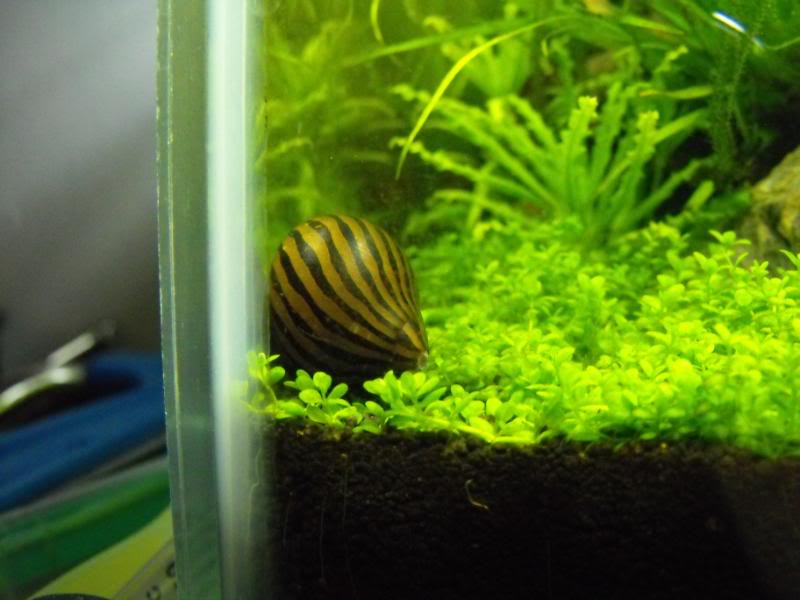 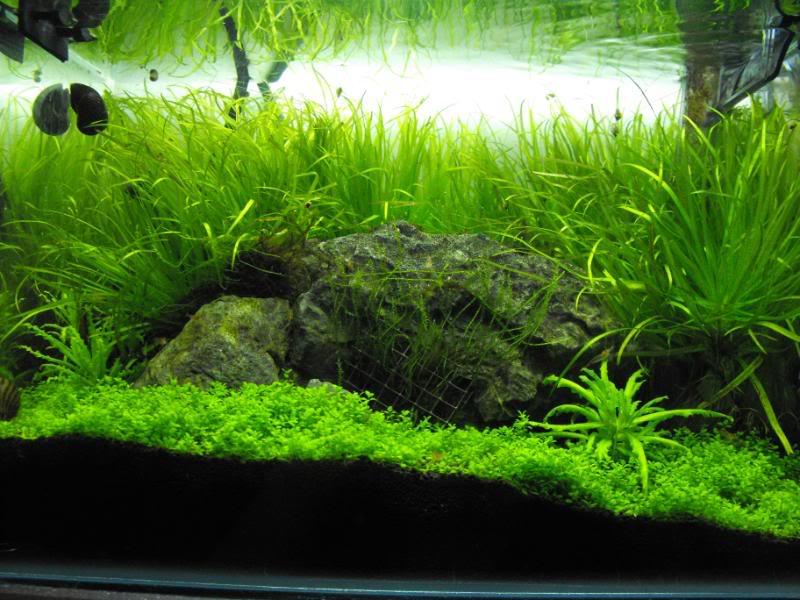 thanks guys! I'm pretty pleased with this. It's my first nano, my other tank holds 100gals!
You must log in or register to reply here.