Thank you everyone, going to try cucumber & courgette see if they like one better than another, I know they hate algae wafers in mine no-one eats them in my tank. Has anyone got an reviews on spinach & kale & spinach sticks?

Hi
I had 4 ottos for few years.Kept them in my 72l community high tech as a start for about an year then transferred them to 36l low tech shrimp tank where they bred few times but not many fry made it as they seem to vanish slowly at arround 1cm long(and 4-5weeks old)with pristine water and food abundance.Never foung the reason why that happened as always thought the first weeks will be the dangerous ones.Now I have 2 left from the 4 in my puffer tank after long ich treatment and high temps.
They are finicky fish.The first few weeks U have them in are crucial and is often few will be lost.But once they addapt they are pretty robust fish.They are not shy eaters once U get them used to the offerings.I always only fed Hikari wafers and nothing else.They are well in to them pushing in to get their share between corys and adult amanos all the time.It is best to establish one spot where U offer the food. Once they taste it in water they are straight there.
If they have the hiding space they will hide as is only natural.Dont over think it.
Regards Konsa
R

I’m not overthinking I just worried there not eating much & theres now 10 of them, as I haven’t seen many of them
R

They are getting braver I have given the option of cucumber or courgette, proud mummy moment hopefully I will start seeing more & more of them 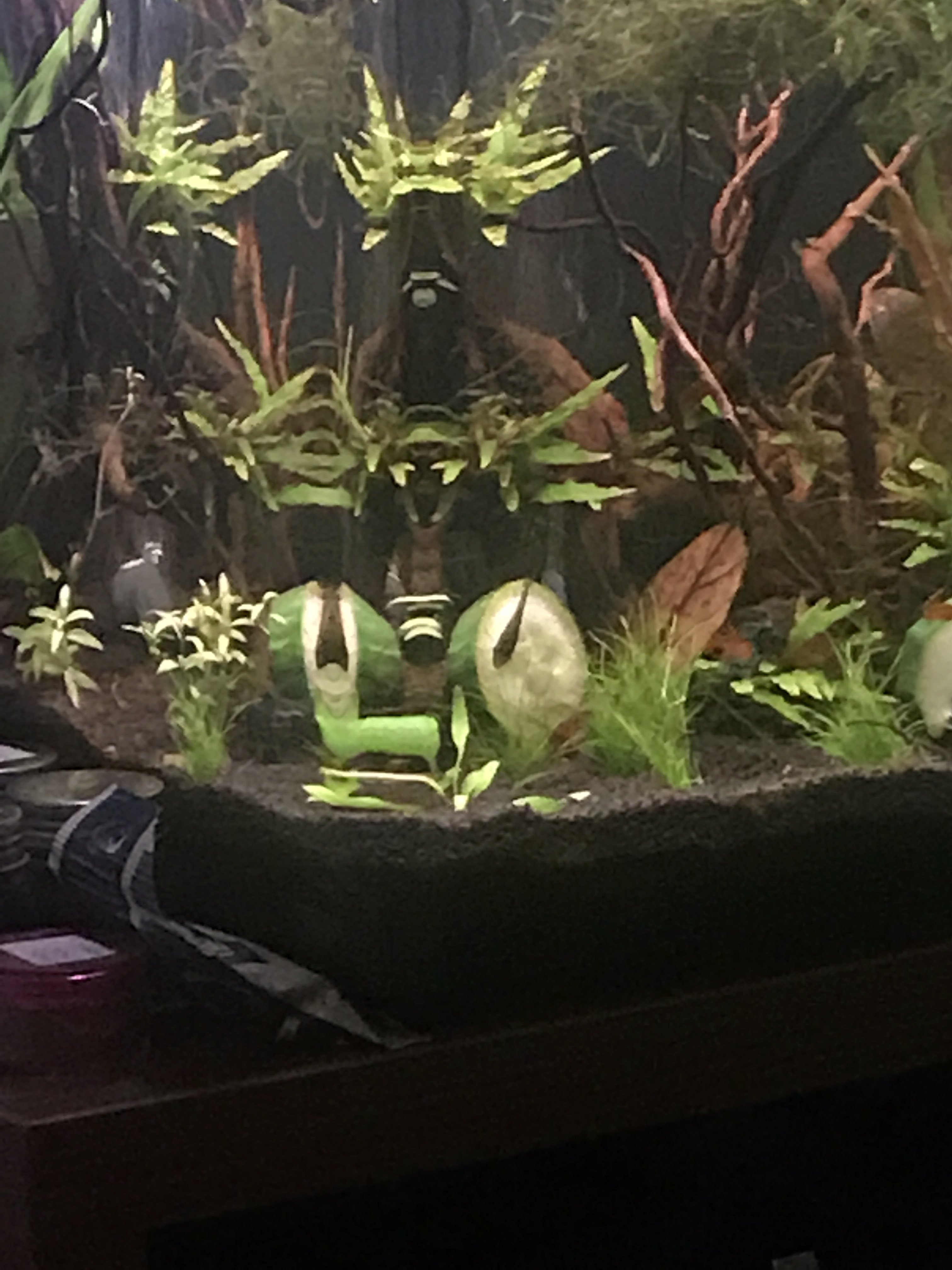 Strangely enough one of my new ones just randomly died overnight. Was fine then gone! Down to 3 now, but I have seen them eating away at algae today so I'll keep a watch on them. Meanwhile I have bought some Amano shrimp as a backup. Can't see them either

They are tough little blighters though, i threw in a bunch 5 or 6 years ago still some there

Update on Otocinclus we have 8 one with fat round belly? Is this good or bad? Need advice please everyone

RiaHx said:
Update on Otocinclus we have 8 one with fat round belly? Is this good or bad? Need advice please everyone
Click to expand...

Fat as in well-fed or as in swollen?
R 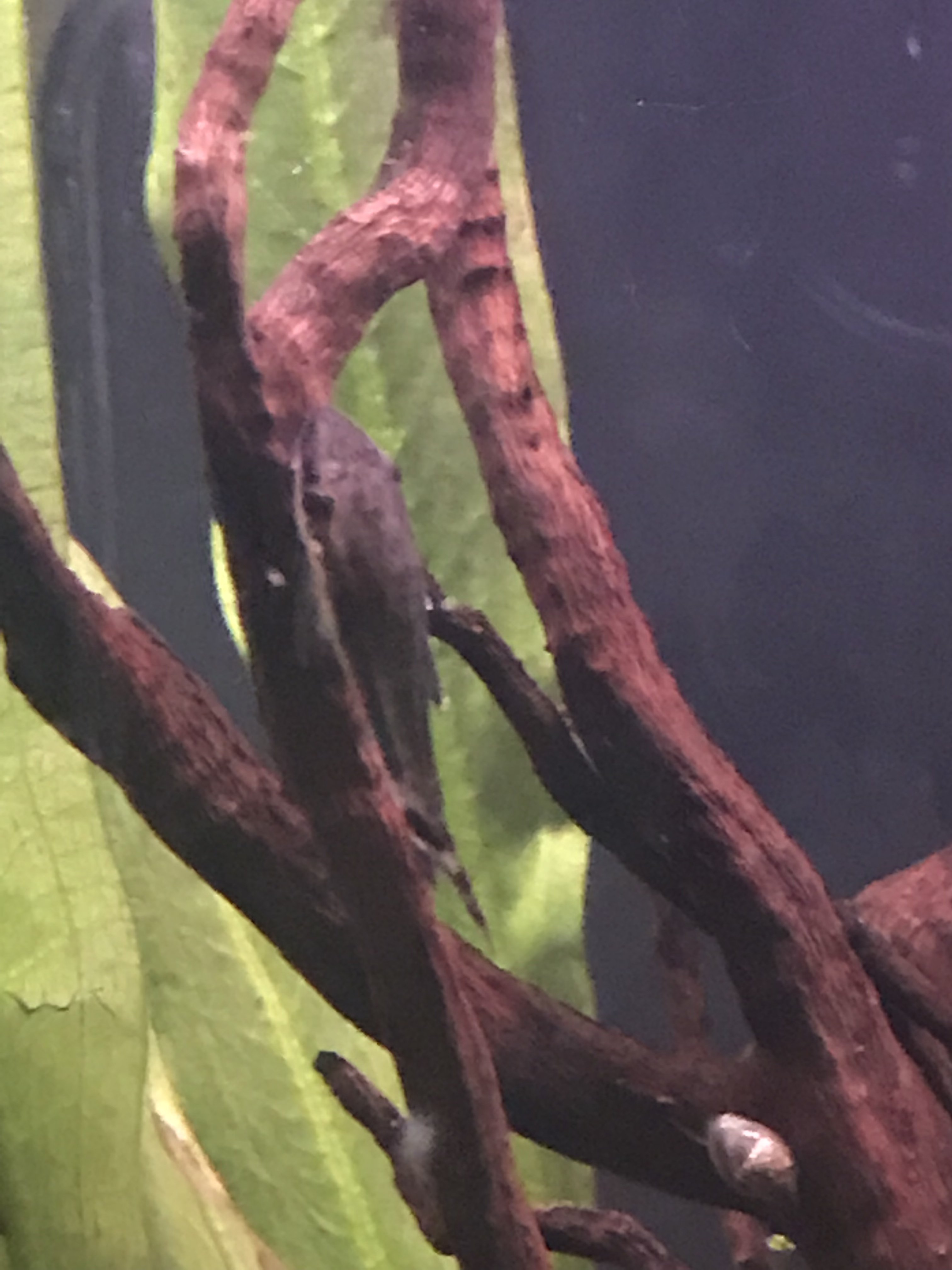 Bit hard to see the belly there though. It could just have a full stomach? Or maybe a bit egg swollen? "fat belly otocinclus" is a used search on Google, try to have a gander on the pictures. If the fish seems fine otherwise, I wouldn't sweat it.

Other animals including humans gain energy from the grazers so a bull would spend all day eating grass getting very little energy/nutrition from it then we eat a small portion of the bull in 10 mins and get the energy/protein the bull took a long time to build up. same for say a Gazelle and a lion, it eats tons of grass all day the lion eats one gazelle job done for a while it's just the transfer of energy. Wow did I digress there haha.

The theory goes with these fish that their stomachs contain bacteria that breaks down the food they eat but what they eat is low in nutrition so they graze like say a cow would most of its day other than sleep time. If the fish doesn't have any food in its tiny stomach the bacteria in there responsible for breaking it down also dies off through starvation. It's said that these fish spend so long in transport and end up in the LFS in bare tanks with little or no algae so by the time you get them the bacteria has gone, regardless of how much they eat they can't break it down to release the nutrition and starve anyway which explains the high mortality rate even though they appear to be feeding.

If the fish stomach is in proportion to the rest of its body that's a good sign. females obviously look broader and fatter when carrying eggs but still relatively in proportion so I wouldn't panic. If they are out and feeding and not looking emaciated happy days. From what I hear the gut bacteria can be transferred from fish to fish so if you put some thin ones in with healthy feeding ones you can turn the situation around apparently.
Last edited: 26 Oct 2018

Just to add, the fish in the pic looks healthy to me. Shows good colour and good proportion. When they are not well they tend to lighten with a more pronounced stripe and it's usually their tails that are very thin from the stomach back when starved.

Hi
It all looks good.Keep feeding in one spot and U will start seeing them all there.8 is awesome tho.I started with 10.Few weeks after they were 4.Tried another 4 to bump them up to 8 latest 4 went in few weeks and gave up .Unfortunately they have high mortality when purchased as most very stressed and underfed.I like picking specific fish individuals in shops after observing them for good 30-40 min(for that I get the look from salesmens and my girlfriend) but still U never know.
All the best.
Konsa
R

Thank you everyone
R 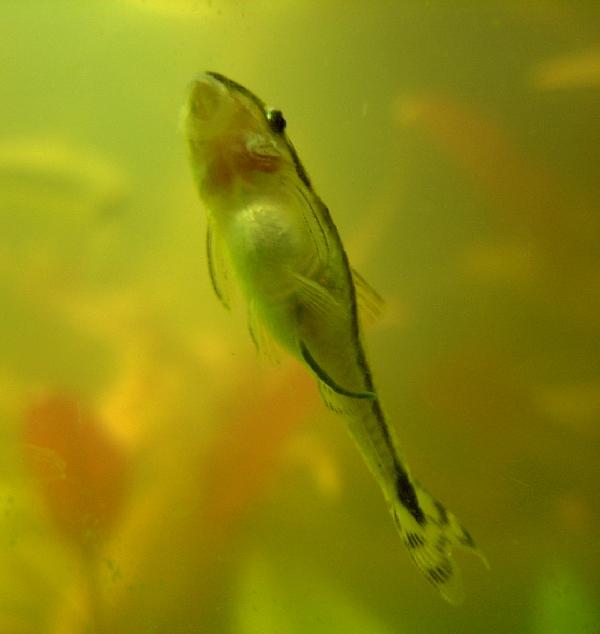 It’s tummy is like this? Full tummy I just it?

Also a good sign with green faeces coming out. Non stop algae eating machines which is why they need added green stuff veg added. They strip the tank of soft algae in no time.

Sent from my STH100-2 using Tapatalk

RiaHx said:
View attachment 118959 It’s tummy is like this? Full tummy I just it?
Click to expand...

AverageWhiteBloke said:
Also a good sign with green faeces coming out. Non stop algae eating machines which is why they need added green stuff veg added. They strip the tank of soft algae in no time.

Sent from my STH100-2 using Tapatalk
Click to expand...

Little machines they are! Wish they were big enough to survive with my polypterus

fishbro said:
cute little fish but very fragile from the looks of it
Click to expand...

azawaza said:
carefully select them at the LFS
Click to expand...

Those in poor health seldom pull through though they are the easiest for lfs to catch. Some hide some don't. I keep mine with whiptails & giant otos and the they take the rough with the smooth. Like cucumber especially when slimy. Always give them the slimy first slice. Never remove it from the tank until only the skin is left. Will often graze on plant leaves that are dying back. Quality water but not prissy about tank appearance. At night will graze on the front glass of the tank. Again not over clean, it has a nice slippery feel to it. Bio films are good news for these guys.
You must log in or register to reply here.
Similar threads
Otocinclus
Some notes on Otocinclus
Share:
Facebook Twitter Reddit Pinterest Tumblr WhatsApp Email Link