Is it ok to have otto's in a shrimp tank with 2 apple snails?

apples are plant eaters get rid if you don't want holey plants. Ottos go really well with just about anything, I've known them take bloodworm but are otherwise entirely safe.
Don't believe the hype.

Ottos are srtictly vegetarians, which makes them really good community\planted tank fish as they don't try and eat anything else!

If you haven't had them before.... they can be hard to acclimatise. Make sure to put some fresh veggies in the tank as they often ignore dried foods and then starve to death. If they last the first month they will probably last years. A fat Oto is a happy Oto 8)

Hi Stephanie,otos are ideal for planted aquariums especially nano tanks,the main problem with otos is,if there isnt enough algae they will wither and die,some people seem to think it is some sort of mysterious death but usually starvation,you can get around this by feeding the occasional algae wafer, they also can be suspect to fluctuating ph levels,so the more stable your setup is the better,then they will live for a long time, regards john
www.johnstarkeyphotography.co.uk

Thanks for the info.

I have had apple snails for 2 years not and have bever had a problem with them eating plants. I was only worried about the otto's being with the shrimp.
I have had them before but gave up as they never lasted long but wanted to give them another go as i have got plenty of alge in the tank.

I have one oto and three Amano shrimp and they are definitely good together.

I never feed my Oto these days- I check on him regularly and and he always has an extremely fat belly from all the algae.

If it is new Otos though, even with lots of algae though I would recommend adding a slice of cucumber (weighted down with plant weight) every day and taking out the uneaten after a few hours. Repeat this every day or every other day for a couple of weeks. I say cucumber as mine love that, I think any greens are OK. Once there belly is fat then you can reduce this and see if the algae keeps them going.

Apart from algae, cucumber and green pepper (capsicum), some of my Otos will eat the odd Tetramin granule and spirulina flake.
--
Richard

Ottos where my first occupant in the tank and to start with I did have some problems but thats due to them being underfed and transportation at the LFS... i sufferd a few losses because I under fed, I fed mine big slices of cucumber left in the tank for a few days then one day no food then another slice in there for a few more. no I dont feed anything special, they rarely come out during lights on and I only feed flake food once a day and frozen food twice a week and they still are alive but I suppose that because I always seem to have algae somewhere...

This doesn't apply to all apple snails. I have a healthy colony of Pomacea bridgesii and they don't touch my plants. The Asolene spixi are another matter entirely

It's a shame the apple snails have a bad rep with plants as the Pomacea bridgesii are gorgeous creatures, looking a bit like graceful aliens

Louisa at the snail shop has some apple snails in now if anyone wants some.

In answer to the original question, yes Ottos will be fine in with shrimp and apple snails. 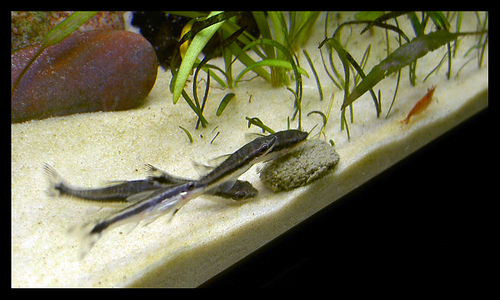 That's nice sand. Can I ask what it is/where you got it?

Hi Stephanie!
Just to add to the Otto 'bigging up', I have 6 of them in my 4ft and they are awesome little chaps. I initially bought a Gibbiceps as my predominate algae control, however, he has grown so quickly that he is not quite as flexible as a general cleaner anymore (His role is more just filling the tank with poo ). As stocking levels were at a premium, I decided to get a few Ottos' due to their algae eating reputation. I dropped them straight in (Not quite literally, acclimatising, obviously!) and they are doing really well. It's probably because there was already a small amount of algae already there. Like with most algae eaters, a lot of sources recommend having some algae already present to enable them to settle.
They are also very hardy. They sit where they like, eating away, and don't even move if I am vacuuming or moving plants!

Edit: Oh, and make sure you get at least 3 or 4 of them as they are a schooling fish and feel a lot more comfortable with company!
You must log in or register to reply here.
Similar threads