I have a 120cm Arcadia Luminaire which holds 4x 54W T5 tubes, two banks of two switched independently. The other day much to my sadness one of the banks stopped working so is now only running on half power. I've removed the luminaire and hooked up some old T8's for the time being.

As there is no way I can afford a new luminaire I've decided to have a go at fixing this one. Dismantling was fairly straight forward and looking inside it looks fairly straight forward as well. All there is are two ballasts and some wiring. I've checked all the wiring connections to no avail so I'm now guessing one of the ballasts has gone. They are Helvar EL2x54s and a quick Google search came up with this - http://www.bltdirect.com/product.php?pid=6018&nm=Helvar+T5+High+Frequency+Ballast&cat=509 which is exactly the same as the one I've got. Going to take the plunge and buy one and see if it works.

Anyone else ever done this before? I'll update this thread with my progress.

Here are a couple of photo's of the luminaires internals and the ballast. 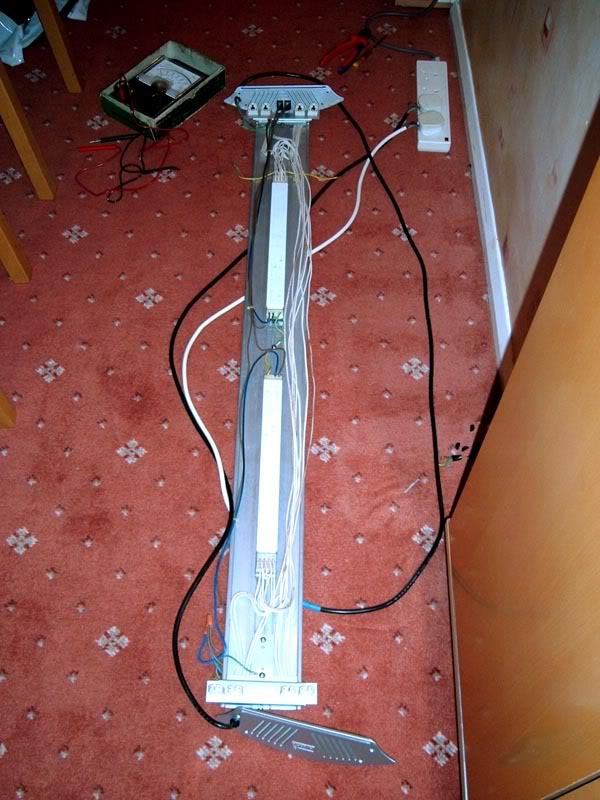 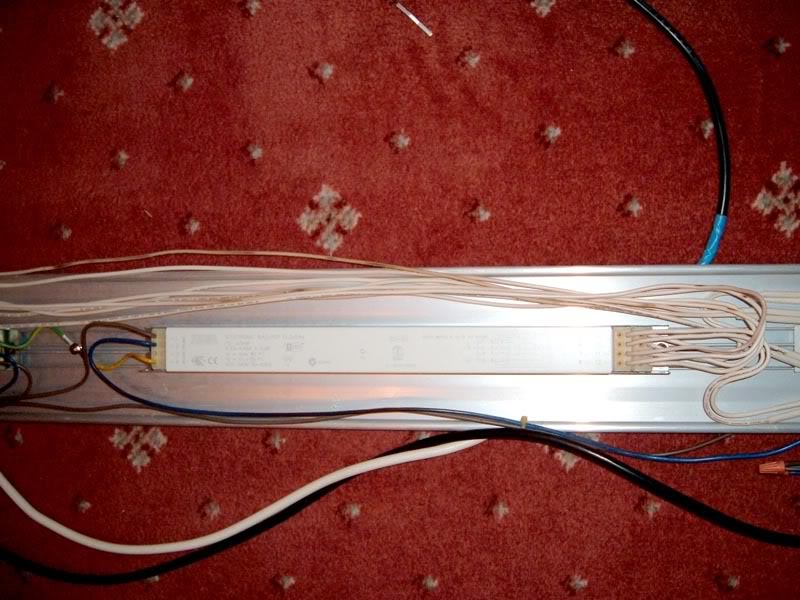 I shortened one of the smaller Arcadia twin T5 light bars last week. I had to replace a wire as well as some cutting and filing. The wiring is push fit and you need to put a small screwdriver into the small hole opposite the wire to release it from the unit. The ballast unit on mine was rivetted to a carrier plate so I removed this instead of what I think you may need to do with yours. You will have to drill the rivet heads off with a drill of about 3-4mm and push out the tails and then pop-rivet your new one on. Push in your wires and re-assemble and your fixed.
M

Just managed to zoom in on your picture and it looks like yours is attached with self tapping screws (lots easier). You could even place the new unit beside the old one and remove and fit each wire at a time saving some time tracing wires (providing it is the exact one).

Yep, wires are push fit but the ballast has two screws, one at each end, holding it in place which makes life a doddle.

nelson said:
hi
these have some good priced ballasts.not the same as yours though.
http://www.nationallampsandcomponents.c ... allasts/17

New ballast arrived today and is almost identical to the faulty one. Took about two minutes to install and all is now working.

Could you explain how to dismount the whole thing?

I have similar type of Arcadia (4x24W T5) and one of the bulbs is not working at all and the second is not working on the full voltage (?) - sometimes it blinks sometimes gives a fraction of the other bulb. I'd like to give it a try althought I'll not use all 4 slots.

For your information if you send Brett of Arcadia an email from the Arcadia weblink e-mail address they will quite happily send you the instructions for the replacements of the ballast units. Makes things a lot easier as not all luminaires have the same light ballast models, as it will depend on whn it was made. This should not be an issue for fitting however it may have different fittings/connections.

Just thought I'd post this info here, as I stupidly rushed ahead and bought the wrong ballast unit to fix my Arcadia 4 x 24w T5 when I did this a few months ago

If you have an original 4 x 24w T5 Arcadia luminaire (same style as Jame's in this thread, not the new ones!), then the ballast you need is a Phillips Matchbox 15w/18w/22w/24w Blue High Frequency Ballast.

Heres the guts of my luminaire, the ballast without the brown-kinda-burnt-looking mark on it is the newly replaced one!