One of my other hobbies outside of fish keeping is collecting orchids. While this hobby came about quite recently around the start of this year, I have held quite an admiration for these plants for a very long time. My mother had always kept orchids around while I was growing up so I guess that was where this had started. I would love to share and see some of your orchids too! So here are mine:

First up are Phalaenopsis orchids: 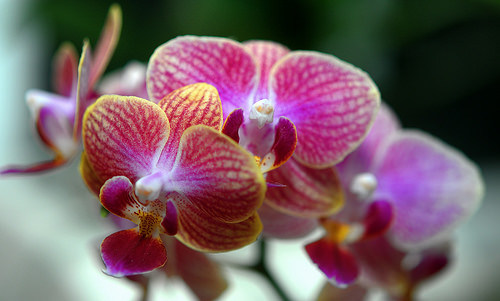 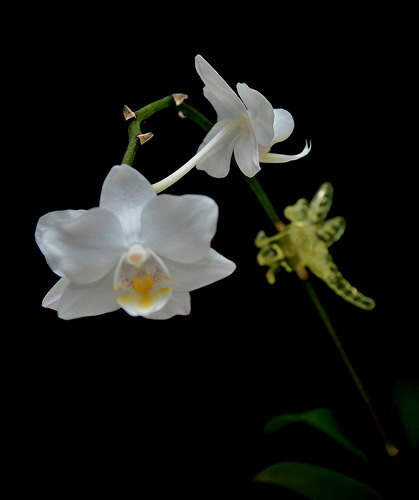 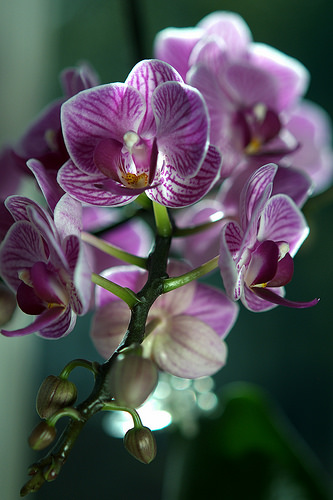 Next up is a Dendrobium Phalaenopsis 'Polar Fire' I really like the purple and whites on this one: 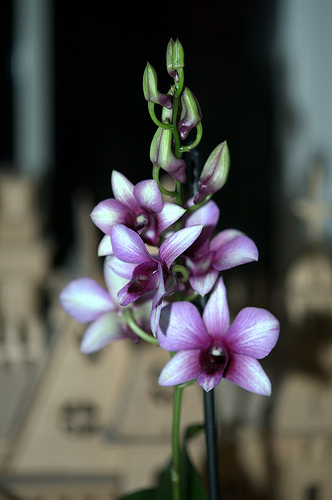 Here it is in full bloom 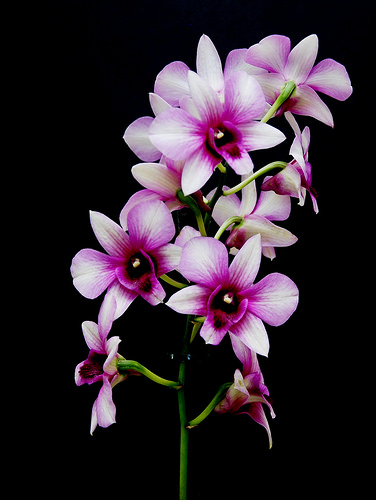 The blooms from the Dendrobium Phalaenopsis had lasted for around 4 months until the final one dropped which is very long as far as I am aware for most orchids.

This is my Cambria Nelly Isler, it has a very nice fragrance to it, similar to that of a lemon. 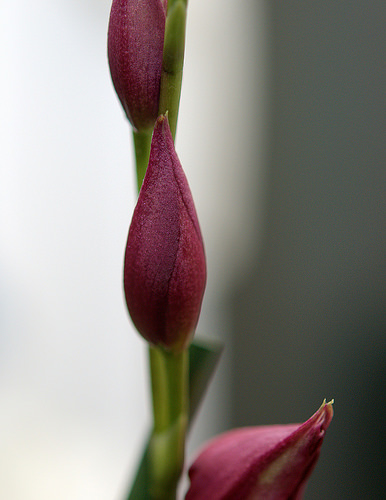 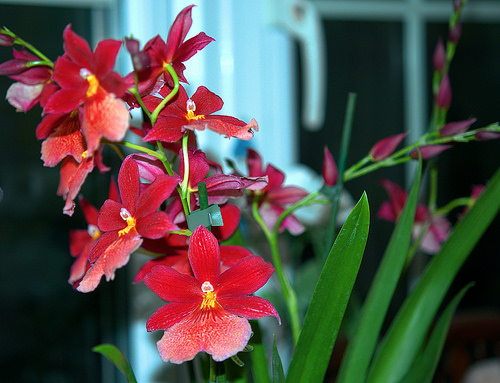 Next up, one of my most favourite orchids, it is the Miltoniposis Herr Alexandre. This one is also fragrant too although, I don't think it is for everyone's taste. The smell is somewhat artificial, perhaps something you may find in a soap? 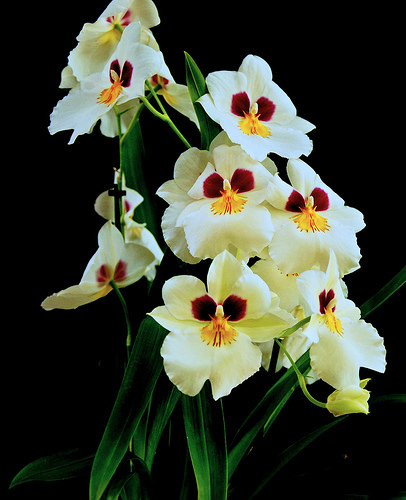 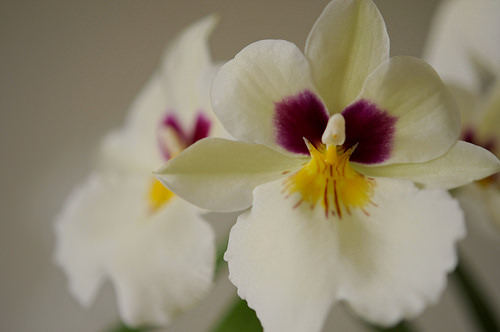 Miltoniopsis Orchids are also referred to as Pansy Orchids due to their resemblance to Pansies. (who would have guessed?).

Next up, the Paphiopedilum Orchid also known as the slipper orchid, this one is a Paphiopedilum King Arthur. Now I'll admit I first got this purely due to the fact that it was my local garden centre's first time stocking this and that I've always been meaning to get one, not due to its colour as there are paphs in my opinion with colour which out shines this one. However, this one has started to grow on me. I do think that I will look out for one that is more catchy in terms of flowers though. 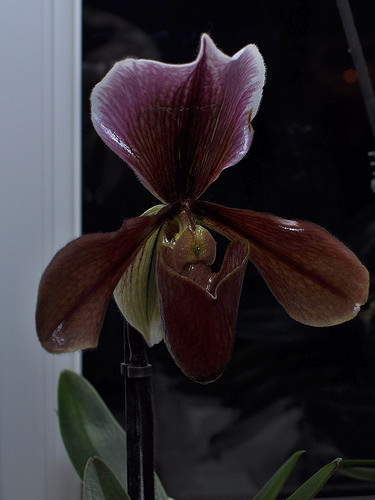 In my opinion, it is very hard finding a lot of different varieties of orchids in general in large chain stores in the UK, but I'm lucky enough to live near a local garden centre who readily stocks different types of exotic plants, especially orchids. If I had a more flexible budget and room in the house, I would have definitely got more than the orchids shown here from that garden centre!

Hope you enjoyed the pictures,

Wow man I really like them. I think weve got quite a variety here in uk in garden centres. When I lived in spain I had only seen phalaenopsis ones. Ill post a photo of my phalaenopsis which has had flowers for more than 5 months. Is this normal? It grows really well and I think its because of my watering and the high temps at my home. I really like this thread and hopefully people will share their nice orchids with the rest.

do you know how long will the last orchids flower last for? Is it hard to care for?. I really like it. Where are your garden centres located out of curiosity?

Very nice collection its something i would like to do myself .
M

Jose Phalaenopsis are reliable bloomers and in all honesty I'm not surprise flowers could last 5 months into bloom as there are usually side shoots from the spike producing more flowers or cutting the spike after the initial blooms near a node to further produce more flowers.

As for the Paphiopedilum, the flowers can last for 12 weeks or slightly longer depending on the type and the way you culture. One thing to take in mind is that many Paphs will bloom only once from one plant (a fan) then the fan will produce offsets to the side and once they are matured they themselves, they will flower. A few years down the line the mother fan will eventually die but by then you should have a more than you started with. It is no common for multiple fans to flower at the same time too.There are also Paphs that are sequential which means that once a flower has dropped, if the spike is still healthy, it will form another bud at the end, this will likely to repeat a few more times! You can also find Paph which are multifloral which has multiple flowers on a spike.

Paphs in general can tolerate most temps in the house but does not necessarily like strong sun. An east window should do for this orchid with a little shade during summer. Paphs prefer to be on the more water loving side as they are semi terrestrial growing next to the ground in leaf litters etc. A potting mix which has some water retentive abilities should be used eg Bark + coconut bark chips or bark and sphagnum moss. While it likes to be on the moist side, do allow the mix to approach dryness before watering or it will rot the root. Bury the plant as close to the base as possible as roots don't like the air too much, it won't send Ariel roots. This is about as much as I can think of right now.

Hi all,
Snap, I've got xCambria "Nelly Isler" flowering in the kitchen at the moment. Other than that the normal mix of Phalaenopsis, Cymbidium & Dendrobium (and Pleione "Vesuvius" in the porch). I bought nearly all of mine remaindered for less than £5 from super-markets etc. so they are not very exciting.

I'm really tempted to get a Vanda, I just need to find a suitable translucent vase to grow it in.

My favourite orchid is Coelogyne cristata, it is a great house-plant for a cooler room and it flowers in January. This is the one that lives in the our dining room (NW facing), although normally on the window-sill not the table. Last year it had about ~80 flowers 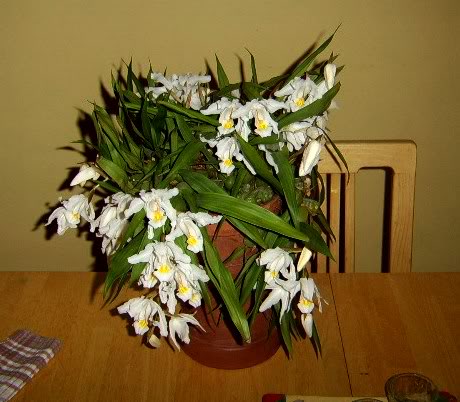 PM me if you want a bit, this was a few years ago and it now needs re-potting and division. The divisions will flower this year, but they won't grow new roots or pseudo-bulbs until late summer.

Lovely orchid Darrel, I'd love to have some of that orchid, shall send you a pm.

Do you use the aquarium water to water orchid? I use my EI aquarium water for the orchid every sunday. The leaves get really thick and broad. But bloom gets less often. Probably due to winter, the lighting gets less intense. Do you see any side effect?

Sorry to derail this thread , but how do guys manage with the high light requirements?

JayZH said:
Do you use the aquarium water to water orchid? I use my EI aquarium water for the orchid every sunday. The leaves get really thick and broad. But bloom gets less often. Probably due to winter, the lighting gets less intense. Do you see any side effect?
Click to expand...

Yes I use old tank water to water all the house-plants. I run my aquariums nutrient deprived, so if it is liquid feeding it is pretty dilute. High nitrogen definitely encourages leaf growth. I let most of the house-plants have a cooler, drier winter rest.

I'd probably try upping the light a bit, the orchids that flower best are often the ones where the leaf growth is a bit stunted by higher light. You could also try letting any orchids with fleshy pseudo-bulbs dry out a bit in the winter.

I'd be more cautious in trying higher light, or drying out for Phalaenopsis, because they don't have any pseudobulbs. 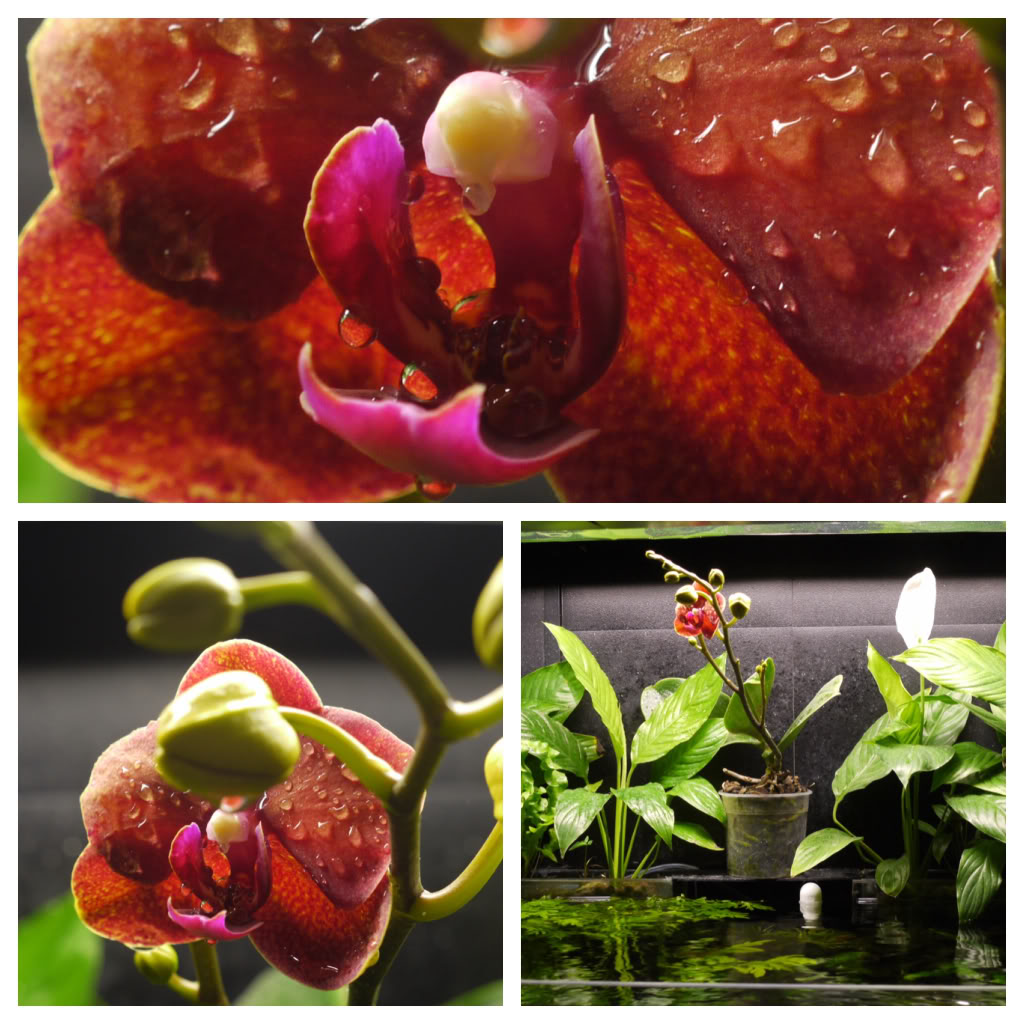 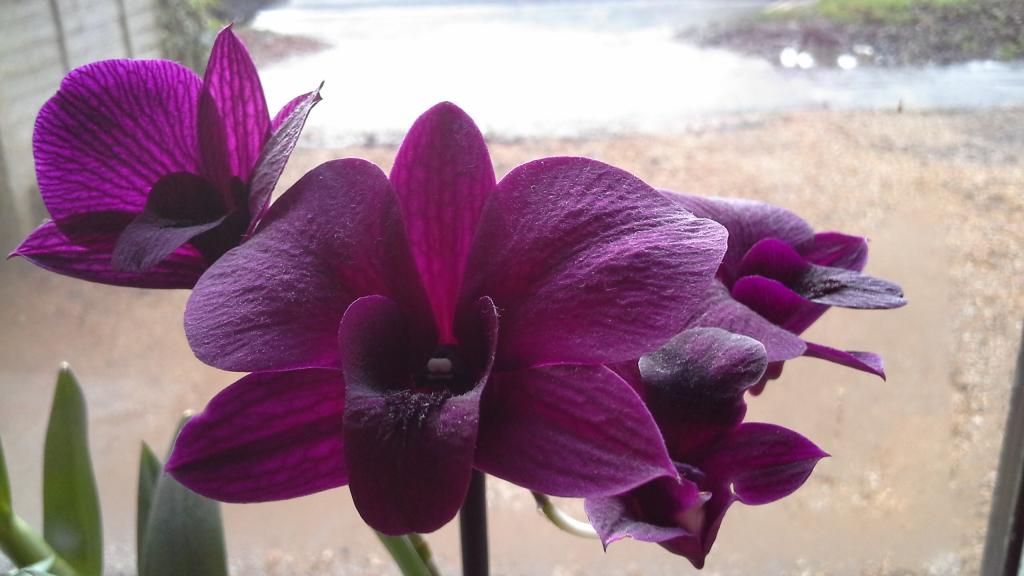 
JayZH said:
Do you use the aquarium water to water orchid? I use my EI aquarium water for the orchid every sunday. The leaves get really thick and broad. But bloom gets less often. Probably due to winter, the lighting gets less intense. Do you see any side effect?
Click to expand...

I don't water my orchids with aquarium water mainly because it was only recently that I started dosing dry salts more often etc so I had used the 'Orchid Focus' brand of ferts. Even so I don't feed them very often as I don't believe they need, in the wild they are mainly growing on trees, so they will likely rely on rotting leaves that they 'catch' so nutrients may be available through small amounts over a long period of time. I think Darrel hit the nail on the head with his explanation.
Orchids with Pseudo bulbs in my opinion are much more forgiving that that of Phalaenopsis simply because their bulbs allow them to store water and in good condition will readily send out more bulb. They lets them to be relatively reliable during holidays too. Phalaenopsis likes to be watered often due to their monopodial growth (no bulbs to hold water). It is often a misconception that you should not water Phals often as it can cause root rot, while root rot can be caused due to water, it is often the potting media and the lack of ventilation in pots which hold on to moisture leading to the rot. As long as you make sure the potting mixture is dry or approaching dryness and the pot has ventilation holes then you can water.


drodgers said:
Sorry to derail this thread , but how do guys manage with the high light requirements?
Click to expand...

I honestly don't give them a lot of of light, they are on the window which receives morning light which slowly decreases as the day goes. I'd we wary of the heat when giving too much sunlight too, some of the orchids can get burnt quite easily or dry out too fast.

Used to have lots of types but have given up trying to keep Vandas and Cattleyas, they just seem to perish after a while, can never get the humidity right with those. My favourites are Oncidiums or Odontoglossum I think they are called now, just love the huge sprays of flowers you get from them. I now have a few Phalaenopsis and I have a fantastic Dendrobium kingianum which is super scented when it flowers.
M

Vandas and Cattleyas are lovely orchids. For Vandas I have seen a lot of people keep them in net pots stuffed with sphagnum moss hanging on bright windowsills. They simply dip the whole pot before the base of the plants for a few minutes when the moss starts to look dry.

From my Cattleya days" 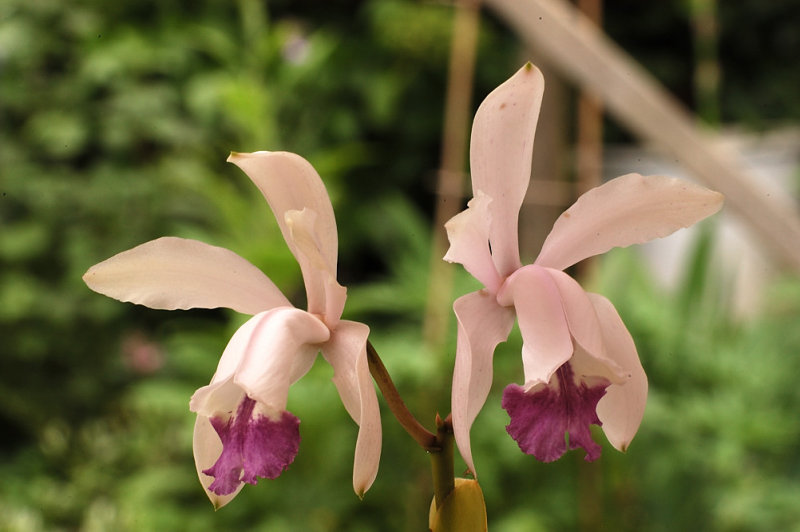 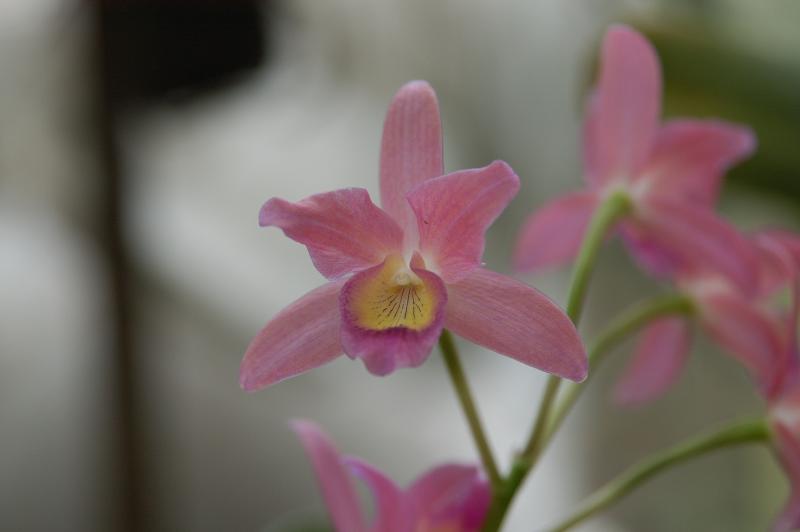 Wow nice edvet. They remind me of an orchid I had in my backyard when I lived in Cuba. It had very big flowers with that sort of shape.

Jose said:
Wow nice edvet. They remind me of an orchid I had in my backyard when I lived in Cuba. It had very big flowers with that sort of shape.
Click to expand...

Likely to be a Cattleya. If it was terrestrial rather than epiphytic? and the flowers didn't last long? it may have been a Sobralia.