Not wishing to take over Zig's thread, I thought I'd start a new one. How far should you go with image editing when entering a competition?

Here's an example with my Iwagumi. First one straight out the camera, second is the final shot.

The first shot IMO isn't a true representation of the tank. Due to the bulbs we use to grow plants, using them when photographing tanks always seems to give you a weird result, like too much pink. The moss looks almost brown (no jokes please, it's not dead! Honest!). Add to that I used crisp white bulbs in the background too. 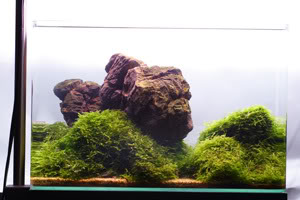 The second shot to me appears to have a more natural colouration to it, and is more how it appeared through the viewfinder at the time of the shot - just there's a limit to my abilities with the camera! 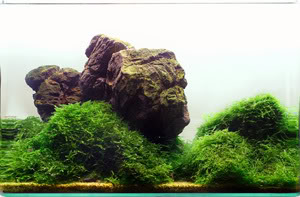 So how much should you edit a picture, if at all? I wouldn't clone new leaves, plants, fish etc, change backgrounds or anything that major, just re-balancing the colour, straightening out, and the odd bit of sharpening to make up for what is lost after RAW-->JPG.

personaly i shoot raw and manipulate white balance and exposure. contrast too. i used to PS alot but not now.

the ada rule should be changed to RAW images only then theres no cheating. if people are serious about entering a WORLD CHAMPIONSHIP competition, they'll somehow get there hands on a RAW image.

what i get from my RAW program 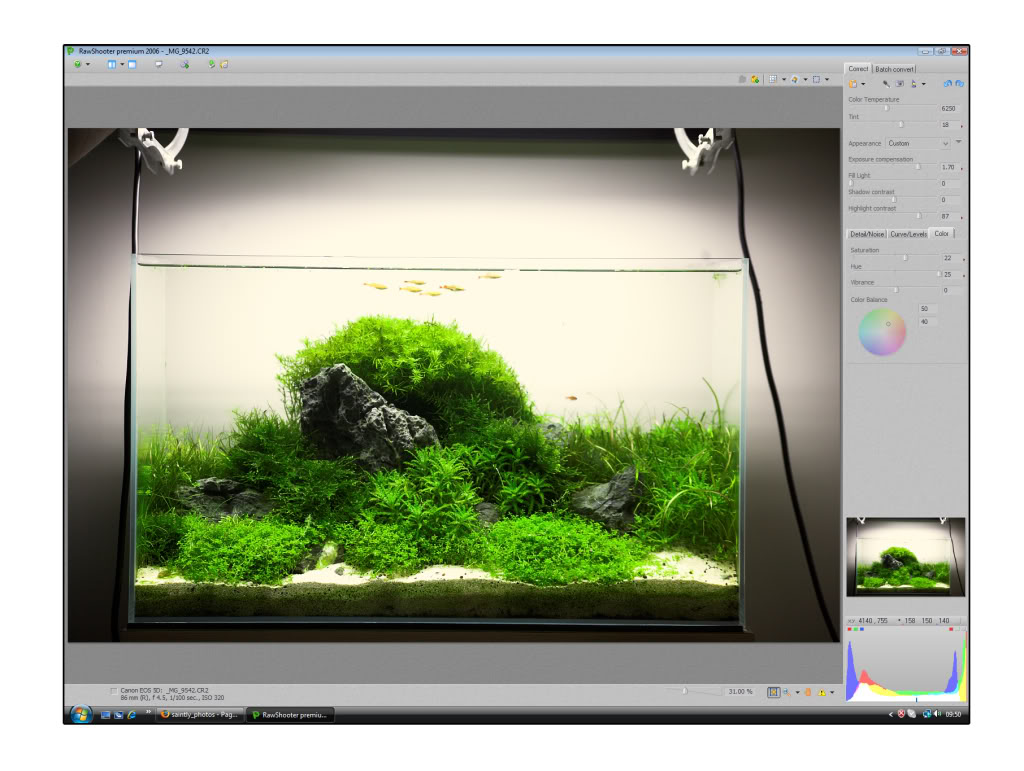 I normally shoot in jpeg, as my PC is slow and I have no decent RAW software. This will change very soon when I return home and treat myself to a shiny new iMac 24" with CS3.

Currently I use Photoshop Elements 2.0 for editing. Usually a little messing about with Crop, Levels, Hue and Saturation to obtain an image that to me accurately reflects what I see from the aquascape with my eyes.

I think as soon as you remove or add stuff, you cross the line when it comes to contests.

I was surprised to learn that the ADA contest state no image manipulation at all.

I'd be very surprised if the majority of entrants stuck rigidly to this rule. Peter Kirwan, I feel, maybe the exception here.

There was some very heated discussion on this subject on the ASW forum where a fairly high ranking ADA entrant was caught apparently cloning plants.

Photoshop use in photography always brings up interesting debates. Just pick up any photography magazine.

I've been able to create some rather 'unbelievable' tanks with just Photoshop elements in my time, for getting ideas on plant layout. Recently got CS3 and I can only imagine what someone with a bit of skill could create with that.

jay said:
Feel that an image of a tank for a competition should be as untouched as possible,
Click to expand...

but how do you (judges) know if its touched up or not?...they dont. they dont have time to look at every tank that closely.

it should be raw images only. no arguments. what you see is what you get. white balance alterations isnt manipulation nor is contrast settings.


jay said:
maybe a touch up of funny (unnatural) colours is acceptable.
Click to expand...

thats fine. id put that in to the white balance category

jay said:
Feel that an image of a tank for a competition should be as untouched as possible,
Click to expand...

but how do you (judges) know if its touched up or not?...they dont. they dont have time to look at every tank that closely.
Click to expand...

It's fine to post process and adjust WB settings, saturation, cropping, straigthening etc all you are doing is what a lab would have done with film anyway. The RAW image saintly posted looks fantastic, the colours are spot on. I think the issue is mainly trying to get decent colour rendition by setting the white balance is very difficult. Normally I adjust mine for the conditions if I'm outside, but with my tank I find none of the custom settings seem to get it right, amazingly if I put the camera WB on Auto it comes out the best. It's a Nikon not sure if that is anything to do with it.

The problem arises when things get moved around as you guys have said. Adjusting the orientation of shoaling fish for example, is a no no in my eyes.
http://www.specialshade.com/
http://www.flickr.com/photos/greenbrightly/

In my opinion the problem is fundamentally based on the mistaken notion everyone, including ADA, have that somehow photography has anything to do with reality. The two are not related, in the same way that a reflection in a mirror has nothing to do with the reality of the person standing in front of that mirror. This is especially shocking since Amano is one of the worlds greatest photographers and is certainly THE worlds greatest Aquarium photographer. So this fundamental priciple should be
ingrained.

There are two main reasons that a photo can only ever be a reasonable facsimile of reality:
1) Reality has at least 3 dimensions and a photo only 2.
2) The human visual cortex has no relation to a camera's sensors - so a camera cannot see the world the way we do. This concept was touched upon in this thread=> The Illusion of Color

Therefore, submitting a photo in RAW in no way makes the image more real or even more accurate. RAW data is not even in color. A DSLR is forced to calculate color and to add the color data to the pixel count. In fact, if a DSLR is rated at 6 megapixels this means that it actually only has 2 megapixels of actual sensor data. The other 4 megapixels are calculated based on the monochrome RAW sensors and the data of the adjacent sensors. This is because the light striking a pixel in a Bayer array can only be recorded as a single color based on the way that the grid is laid out. So it depends on the algorithms being used to calculate colors which will determine how an image looks. This means that no two camera models can take the same image and that no two RAW image processors can calculate exactly the same image,even when given identical RAW data. They use different algorithms. When your RAW program opens the image it uses default settings to display the image so it has already applied a certain set of color profiles.

Film was never real either. Shooting the same subject with Fuji Velvia gave a completely different image than with Kodachrome. Each film has a different color cast so no professional portrait photographer would use the Fuji, and no landscape photographer would be caught dead without it.

Does anyone looking at, say, a fashion magazine actually believe that that's what the models actually look like in "real life"?

The only real way to judge a contest is for the judges to travel to the site and to view the tank with their own eyes, otherwise it's all an illusion. Of course, that's impractical, but aquascaping itself is based on illusions because we are trying to convey a concept or an idea using elements we have at our disposal.

So what is real? If I scrub my tank down and remove any trace of yesterdays algae attack, does that count as fake? If I remove all the equipment prior to taking the shot, is that real? Does the tank really look like that 99% of the time? If I use a hair dryer to simulate ripples should that be allowed?

Sure, drawing the line at cloning or whatever seems to be a fairly logical set of rules to keep things from getting out of hand and I suppose some rule enforcement or "proof" will be required in future contests but we are deluding ourselves if we forget the basic tenets of photography and light, when something as simple as a minor saturation adjustment can make the difference between a boring shot and a spectacular one.

All Nikons have a simple way to achieve Custom Balance which produces a more repeatable color balance than any of the other standard settings. One may still prefer AUTO or CLOUDY or whatever but it's easy to calibrate. You need only a white or gray object such as an A4 standard white printer paper (or a classic 18% gray card).

Submerge the white/gray object so that it is lit evenly by the lighting combination.

Point the camera at the white card and fill the viewfinder frame with white card . Make sure that nothing else but the white fills the frame.

If a proper calibration was successful then the viewfinder will flash "GD" or "GOOD" or something similar. The LCD may have a message like "Data Acquired" If the calibration was unsuccessful the the viewfinder will flash something like "No Good" and the LCD message will be something like "Unable To Acquire". If that happens then just go back to the menu and select "PRE" In some cases you are able to name this custom WB so you can call it RIO or whatever and it will appear as a selection. You can have more than one PRE but I'm not sure how many. It depends on the model.

Aquarium lights produce a lot of green. This is not surprising because we are most sensitive to green, so to counter this the PRE will add quite a bit of magenta which is the opposite of green. If you take a daylight picture using this WB setting your image will be very pink.

Custom WB does not guarantee that your images will be more appealing, you may still prefer AUTO WB but they will be supposedly more "real"...

ceg4048 said:
The only real way to judge a contest is for the judges to travel to the site and to view the tank with their own eyes, otherwise it's all an illusion. Of course, that's impractical, but aquascaping itself is based on illusions because we are trying to convey a concept or an idea using elements we have at our disposal.
Click to expand...

Interestingly, that's how the NBAT (Dutch) aquascaping contests are judged.
You must log in or register to reply here.
Similar threads