It`s way too early to reveal this scape ( one day old), which represents the third reincarnation of this tank, but I would appreciate any advice out there. I ran the Riccia scape to destruction to see far how I could push the Riccia for future reference. I am sad to see it go, but I will do another Riccia based scape, I am sure.

Lifting the rocks in to this tank was a pretty nerve wracking job, to say the least. I am still playing around with smaller rocks at the front, and intend to have a sandy foreground.

Essentially, HM and HC are going to be growing in and around all the lower rocks, softening the current stark appearance of the mid and foreground rocks. Getting the pruning right will be a real test for me(wish I had some UKAPS pruning scissors

). Getting the "flow" of the greenery around the rocks will be key, along with how much rock remains in view, I think.

I am not happy with the lower left hand side. These rocks look a bit too just plonked in at the moment, leaning against eachother the way they do, but HM growing over and around this area will improve the look, hopefully.

Cascading all the way down the left hand side of the largest rock will be HC, some of it spilling out down the front of the rock. This is a problem area during water changes, as the lowered water surface washes the Eco complete away. Once the HC is firmly rooted, this problem will hopefully disappear.

Due to the current relatively low plant mass, I have floated a lot of Dwarf riccia from my 60cm, along with some HM cuttings.

The photo was a bit rushed, and the whole set up looks a bit stark and unruly, but once the plants are sorted and I have a white background on, it should brighten up a lot.

The O2 bubbles of my Riccia scape looked amazing of an evening, when it was backlit, so the target for me is to produce a better looking scape than that one. Fingers crossed! 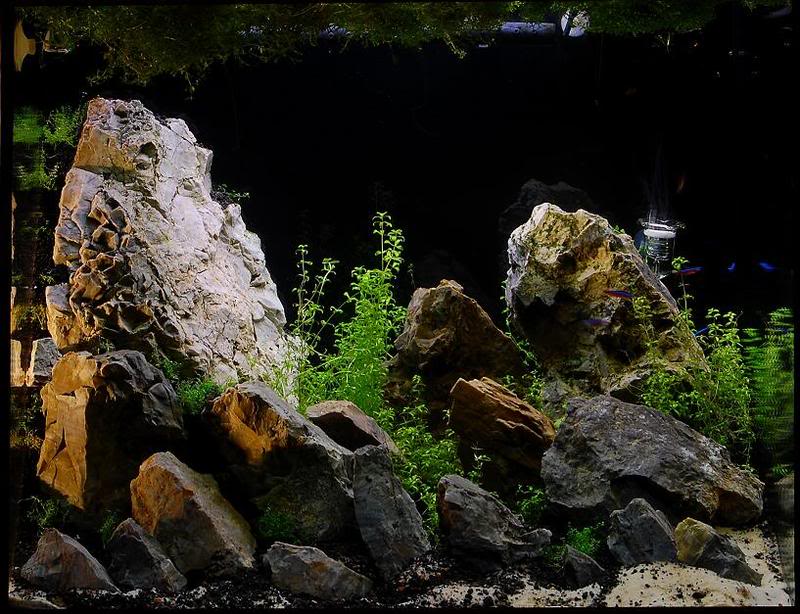 Looks nice, IMHO though the rock on the left looks a bit large.

However I'm only a newby, i've got a lot to learn probabley turn out fantastic.

Nice to see your momento hasnt slowed Dave.
Its very difficult to picture what you are trying to achive, but i can see it. Like you say, get all your stems right etc, it will really bring the scape together.
I agree with what you say about your rocks, perhaps have the large rocks pointing in the same direction, as you would see in Wales its self, but go for a kind of random boulder composition near the bottom of the scape.Ie random directions and sizes. I think some smaller rocks are needed, the lower part of the scape are all similer in size. To achive the landscape look, your going to need to grade your rocks right down to the smallest possible.
I think the scape would benifit with some sections off moss, give it some scale and age.
Not sure about the rock to the right, i think it would look better pointing out to the right, creating a "V" composition.

If it were mine I would try and point the large rock to the middle slightly to see how it looks. The small foreground rocks look a bit "domino-esque" at the moment, but as you say it might look better when the HC grows in. I've had a thought about positioning if you don't mind. That is remove the front right rock, point the 2nd rock from the left in the other direction and remove the long thin upwards-pointing rock in the front centre. Just my thoughts, good luck with it

Thanks for the excellent critique, guys.

I think we are all agreed that the foreground needs some work. Dominos about sums up the left foreground, Tom. Once the HC has grown in it will cover a lot of evils, but i would rather get it right before then. One must strive for perfection.

The moss is an excellent idea Graeme. I was hoping that the HC around the large rock would create this kind of imagery, but moss may well convey this a bit better. I shall bear this in mind.

This scape is a bit of a rushed job, something that I wanted to try before I move this tank in to the girl friend`s house (seems odd saying that when you are 44) in a couple of months. I am sure I will be able to produce something presentable.

Don`t ever hesitate to give advice tgc, you are a member of UKAPS, don`t you know!

When I am gone, make sure the missus sells my camera gear for what it is worth, not what I told her it was worth.
Z

How big is this tank Dave?
Regards,
Peter Kirwan

The tank is a Juwel Lido. It`s 120l, but only 60cm wide with a height of 50cm. The front to back depth is pretty good, but its cube like shape makes aquascaping a bit of a vertical process.

Hopefully, once I have got this scape out of my system, I shall be setting the tank up for someone else in their house, and moving in an open top 120cm so I can have a proper attempt at an Iwagumi.

When I look at this tank I feel like there should be a line of substrate down the middle where the HM currently is, raising the entire middle section, mountains are craggy but they are smoother than in this scape.
I really like it though, any more pictures?
Don't believe the hype.

Garuf said:
When I look at this tank I feel like there should be a line of substrate down the middle where the HM currently is, raising the entire middle section, mountains are craggy but they are smoother than in this scape.
I really like it though, any more pictures?
Click to expand...

I know what you mean, Garuf, but this is the main area for planting. If I did not plant here it would be hard to justify calling it a planted tank.

The HM itself will raise this central area once it grows in. There is also a little Micranthemum umbrosum planted along the back just in case I wanted further elevation.It will be growing in one or two other places as well.

The hope is to have what look like bands of forestation, with craggy outcrops poking above. Hopefully, the stark, craggy appearance wii soften with plant growth. The current look is nothing like what I have in mind, it`s just fingers crossed that this works.

Thanks for the encouragement as always, Corin.

A lot of people on here seem to be stepping up a level with their aquascaping, and I don`t want to get left behind.

Awesome rocks, Dave. And free too?

I look forward to seeing this one develop.

It starting to look like a planted tank now, instead of just a pile of rocks. The HC has let me down a bit, and taken an age to start growing. I doubt I will get the effect from it that I wanted.

I guess it is time to start pruning in earnest to get some kind of flow to the HM. 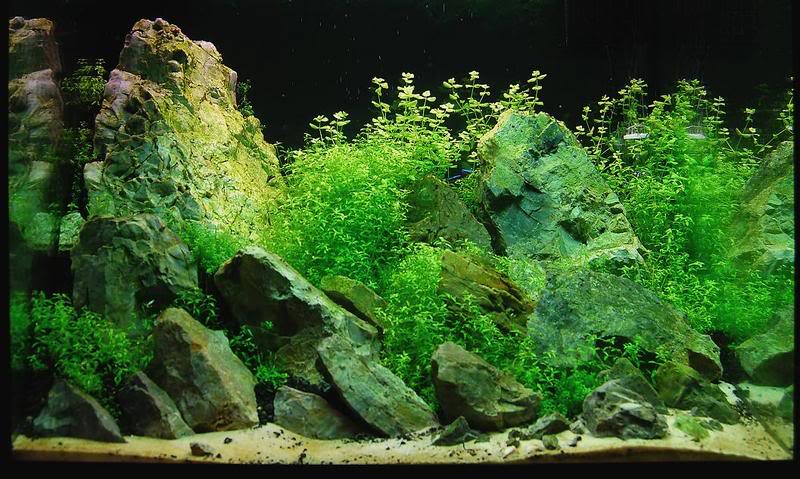 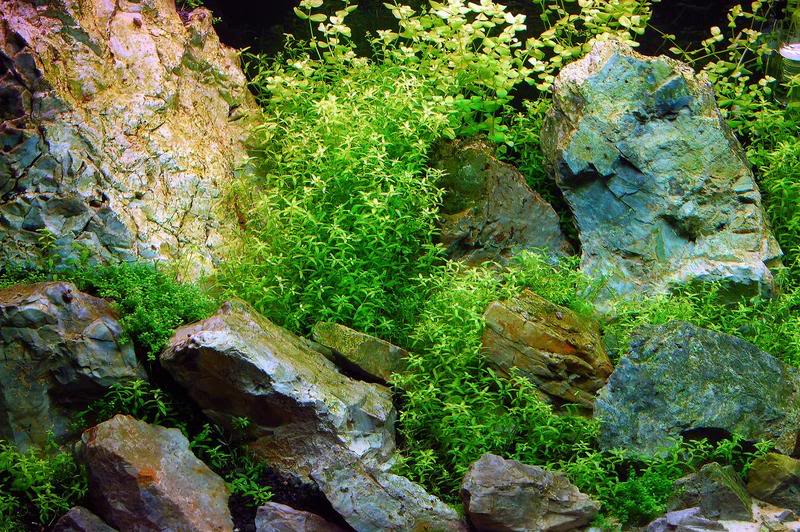 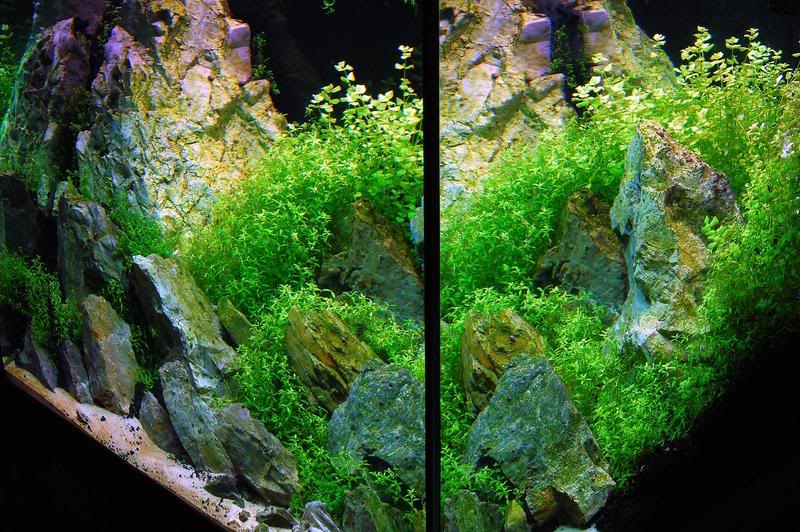 OMG Dave, have you been looking through my dining room window getting a secret glimpse of my tank! That is very similiar with the rocks and HM.

I love the way the plants grow around the rocks, it looks very natural.
Brilliant.
Moss Man, aka Michael Lawson

Nice work Dave. Love the colors in the hardscape.

Thanks for the positive reply people. You have warmed the cockles of me `eart.

Clive, funnily enough I was thinking how the camera AWB picked up the purple hue of the Interpet Triplus on the largest rock. It`s never done that before. The last two pics are probably the closest I have ever got to the actual colours of any tank I have ever photographed.

I want to start shooting in RAW, but can`t find the appropriate software to use with a D40 and photoshop 7.

Hi Dave,
Check The Luminous Landscape. There are some links for the Camera Raw plugin for v7: http://www.luminous-landscape.com/revie ... -raw.shtml

v8 and above come with the Raw plugin and a slick Raw interface so you may want to think about upgrading.

On the other hand, I've not yet found any real advantages to using Raw and in fact there are some major disadvantages. The jpgs straight from camera as as sharp as what I can produce from Raw at a fraction of the file size. As a direct result of the jpg file size advantage, disk storage requirements are lower, process times are faster and.. I don't have to trawl around looking for software to read proprietary (*.nef) file types.

Superb, Dave, in every respect.

The rocks are great, the layout well-executed, plant growth extremely healthy, photography excellent - what else can I say?!