Why are my anubias dying?

Some of you have been following my tank log. So far so good except for one annoying problem.

My anubias do not seem to be rooting to the rocks, in fact the rhizomes / rosettes / roots are rotting and dying.

I have had this problem before but never got to the bottom of it. All other plants are growing relatively well.

I have ruled out lighting, flow and ferts.

Grateful for any advice? 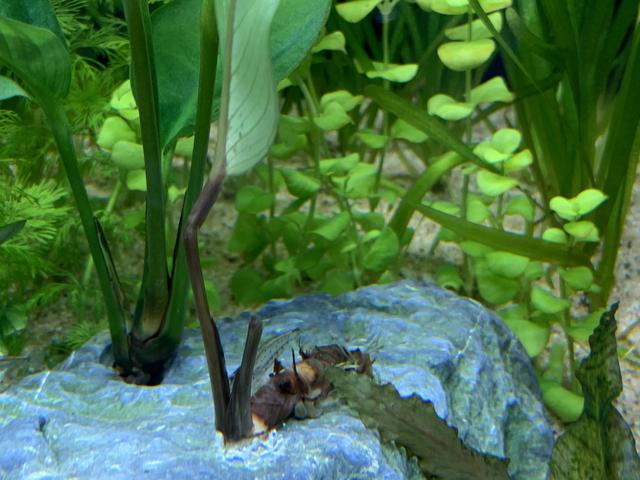 Looking at this single picture it would appear that the plants have been glued at the growing end (the part of the rhizome that advances as new growth appears) this may be a cause for the issue. If other Anubias are attached differently in the tank but are suffering the same symptoms then this makes this scenario less likely.

As can be seen in the pic is also an Amano shrimp feeding at the base of the plant, if they are eating the roots this may also be a cause for the plant health issue. There is the possibility that they are being attracted to something else.

As the tank has been reset since you had the first issue (past problems with Anubias going the same way as above) cross contamination of a potential pathogen to new plants is only possible if you have reused anything from the previous set up that would be resilient to sterilisation such as woods or can't be sterilised like livestock (snails?). If this is the case then it might be wise to remove all anubia species (in the bin) and to dose a nematocide to the tank to discount Burrowing Nematodes as being the pathogen causing the problem (eSHa NDX as an example of a nematocide).

At first you should try again with new Anubias, leave one of them in the pot with the roots still protected by the Rockwool (to negate predation by Amanos as an issue) and another out of the pot just tucked in somewhere loosely with no restriction to the growing rhizome and then glue one to the rock but at the opposite end to the growing end. Observe the outcome and make changes accordingly, if none of these work and the issue persists then I would dose the nematocide, maybe multiple times over a few weeks.
You must log in or register to reply here.