Will cyanobacteria go away when tank settles?

dw1305 said:
If cyanobacteria "outbreaks" are associated with raised levels of organics then the trigger rise in ammonia level might be really small. Cyanobacteria are like diatoms and pretty much universal on earth, I would guess all tanks will have some present at low levels.
Click to expand...

I may have asked you this before but have you ever taken a sample of slimy BGA from an aquarium, taken it to your place of work and identified it? I ask specifically about the slimy stuff as this is obviously what @Andrew Reynolds has in his tank. But I've also seen a patchy type of BGA, which was more akin to BBA in form but was blue-green in colour. According to Aquasabi, "Quite often, slime algae belong to the genus Oscillatoria (filamentous cyanobacteria)". This is supported by Paul Krombholz at The Krib (remember that?) who says:

"They used to be called bluegreen algae, but cyanobacteria is being pushed as the better name because it draws attention to the fact that they are not related to other algae, but are large, photosynthetic bacteria. Some of them have a bluish pigment in addition to chlorophyll. There are some species that can fix nitrogen, but the ones that take over aquaria are usually varieties of Oscillatoria, which does not have heterocysts, and I assume it does not fix nitrogen".

So, perhaps what we have/don't have in our tanks is not Microcystis aeruginosa after all. No less than 22 years ago, George Booth (also at The Krib) wrote:

"We had a mild problem with blue-green algae growing below the gravel line along the front of our acrylic tanks. I would suppose conditions there are good: light being channeled in via the plastic, no water movement, low oxygen, available nutrients (?)".

Andrew Reynolds said:
My question is will the plants eventually out compete the cyanobacteria so that it disappears if I do nothing but normal weekly water changes, or should I do a 3 day black out or treat with something like Easy Life Blue Exit. I have 3% Hydrogen Peroxide but am nervous of it killing my filter material?
Click to expand...

Cyanobacteria elimination, in my experience, is never easy. There are many factors at play. And we've talked about some of them here. I suggest that you read through the posts in this thread to see if anything resonates with you. Reduced intensity lighting in combination with Blue Exit and good water flow/oxygenation may be worth a try.

I may have asked you this before but have you ever taken a sample of slimy BGA from an aquarium, taken it to your place of work and identified it?
Click to expand...

No I haven't. For whatever reason I've never had much in the way of obvious cyanobacteria, and if I need some I have a couple of <"Cycas revoluta"> and Azolla from which the symbiotic cyanobacteria are very easy to extract.

I've seen scattered strings of cells (trichomes) in biofilm samples, but none of my tanks <"ever smell "earthy" or "pondy">, which is a pretty good indication that there aren't many Cyanobacteria present.

The only place where I'm likely to get a smear of BGA is very occasionally <"on the old leaves of Pistia">.

I've had tanks with <"balls of Nostoc">, and I've just noticed some in the "moss" tank, where the moss forms a solid block at the water's surface.

dw1305 said:
For whatever reason I've never had much in the way of obvious cyanobacteria...
Click to expand...

My understanding is that you prefer the 'low tech' approach to planted tanks. If I'm correct in saying this, then, perhaps you don't have problems with cyanobacteria because you have 'low' lighting?

jaypeecee said:
If I'm correct in saying this, then, perhaps you don't have problems with cyanobacteria because you have 'low' lighting?
Click to expand...

@jaypeecee yes I am strictly "low tech", and I tend to run the tanks fairly nutrient lean.

I have some tanks with <"higher intensity lighting">, but they tend to have a much heavier plant load. The bottoms of all my tanks are <"dark and gloomy places">, whatever light I have.

Thanks, Darrel. As I said, the low(er) lighting may be one of the reasons why you don't have a problem with cyanobacteria.

Franks said:
I beat it by over-dosing H2O2 on a daily basis before lights on.
Click to expand...

For those who maybe tempted to go down the H2O2 route I've just found an interesting aquaculture article on the use of H2O2 <"Removing cyanobacteria and associated toxins in aquaculture ponds">.

Franks said:
I've beat Cyano having been through it twice and nearly giving up. It wiped out all my plants it got that bad. It was growing off the plants and all over the substrate. it killed all the plants to the point there was no point trying to save them as they were too badly damaged.

I beat it by over-dosing H2O2 on a daily basis before lights on. Two capfuls of food grade 6% (approx 30ml directly into the water column with the filter running. Fish are unaffected, and while the cyano doesn't appear to die immediately, it started to reduce after a week. After a month, it was all gone.
Click to expand...

To what volume of tank water did you add the 30ml of H2O2? You say 'over-dosing'. I've never used H2O2 in an aquarium so I wouldn't know what would be considered a 'normal' dose.

dw1305 said:
For those who maybe tempted to go down the H2O2 route I've just found an interesting aquaculture article on the use of H2O2 <"Removing cyanobacteria and associated toxins in aquaculture ponds">.
Click to expand...

That's an interesting article. But I don't understand how the fish survived in water with an ammonia level starting at around 0.9 mg/l and then increasing to around 1.3 mg/l. And the pH was >8.8 throughout so we would be looking at NH3, not NH4+. Very odd. Am I missing something?

... I've come to the conclusion that there were almost certainly no fish in that aquaculture pond. It's just dawned on me! It was this statement that threw me:

"There was a spike in ammonia within 2.5 and 4.0 mg/L H2O2 ponds on days 7 and 8, respectively, but these were within the tolerance of freshwater animals (my italics) and decreased after week 3 (Fig. 4c)".

But, then, it concludes:

"A limitation of this was study was not assessing the potential toxicity of H2O2 to fish. There are indications this would be safe, based on no apparent toxic effects to zooplankton at 2.5 mg/L and limited persistence in water; however, this will be tested in the future on juvenile channel catfish and largemouth bass".

Thanks for everyone's replies to my question. I hadn't realised there had been so many since I last looked.
I have gotten rid of the cyanobacteria now. I used UltraLife Blue-Green Slime Stain Remover which did the job. I have also planted quite heavily and renewed the sponges in my filter. I also upped the flow by adding another powerhead.

Here is my tank now (it needs the plants cutting back which is tomorrow's job). 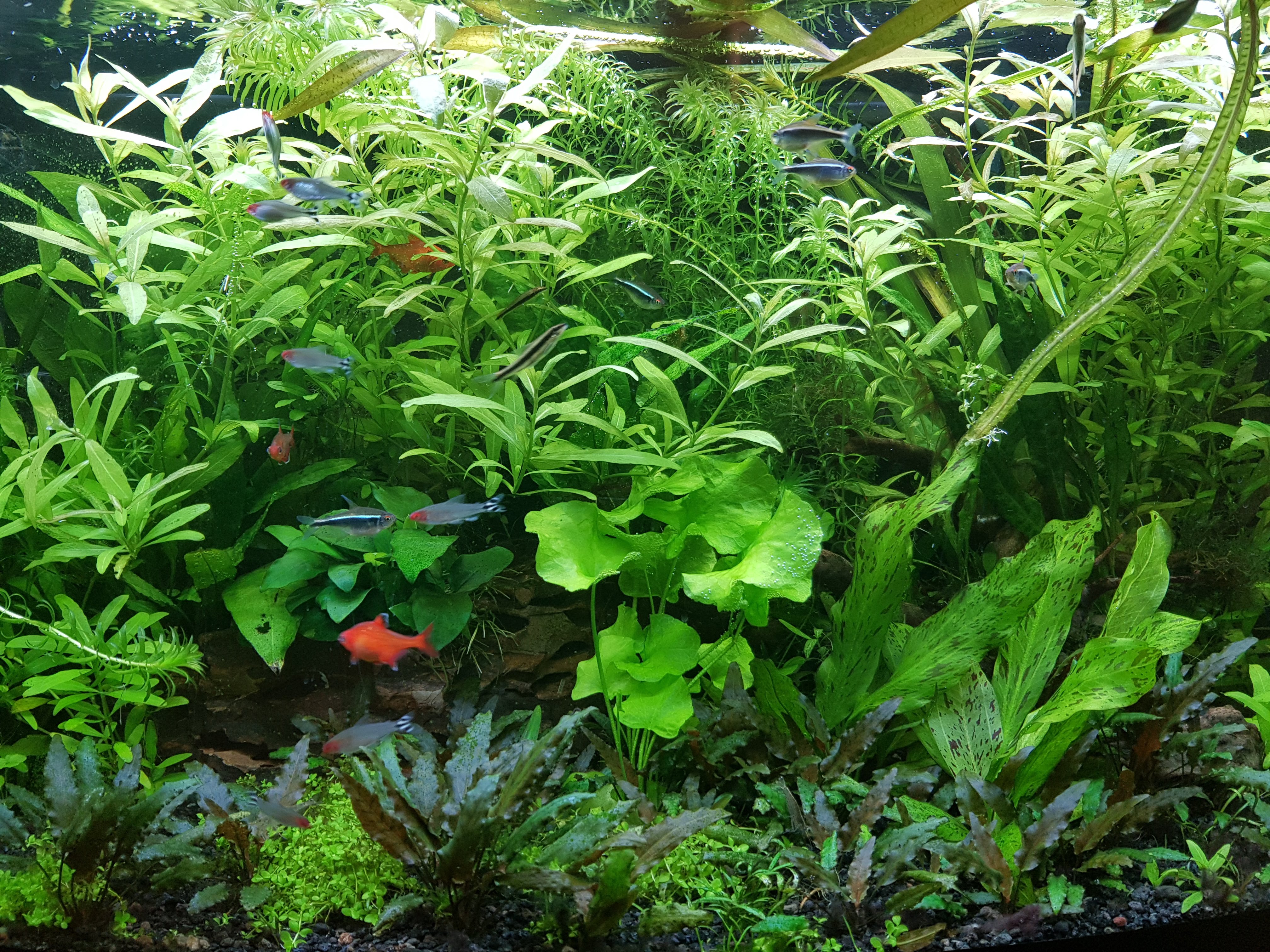 Andrew Reynolds said:
I have gotten rid of the cyanobacteria now. I used UltraLife Blue-Green Slime Stain Remover which did the job.
Click to expand...

Wow - what a transformation! Your tank looks great. I am envious. Whatever is in that UltraLife Blue-Green Slime Stain Remover seems to do a very effective job of eradicating Cyanobacteria. I can see that I will need to consider this treatment in future.

JPC
You must log in or register to reply here.
Similar threads