Matt @ ScapeEasy said:
I have seen people us a dewoemer med for dogs to treat planaria. Would this working in this instance?
Click to expand...

Yes. it probably would, Flubendazole is often adviced (Flubenol 5%).. It's also used for Gil and skin flukes. Tho, it is a med that administered orally to animals, it is not developed to dissolve very good into water. As most of the usual deworm pet meds are.. Planaria is a resiliant bugger, the adviced dose Flubendazole against planaria is 2 gr/100L and that is quit a high dose.. No warranty all fish will take it very well, for skin and gil flukes a 0.8 gr / 100L is adviced and still with causion.

So for treating against planaria with delicate tropical fish in the tank it is quit an agresive method. A more safer option is <NoPlanaria>, this is a Beetlenut extract that is safe for fish and shrimps and definively kills planaria and unfortunately some snails as well.

Still need to be very causious, since you do not know how many planaria you have killed that are in the substrate. Seeing one or two, means you might have 100x as much you don't see.. Doing a lot of extra water changes and substrate vacuuming after the treatment realy is a nessecity. If you don't you might run into trouble because a huge bioload of dead and rotting worms in the substrate can releas a lot of nasties into the water column killing the shrimps and sicken some fish.

Obviously this goes for any alternative treatment that kills them.
Cheers,
Marcel..
Tanks for watching.

Hi all,
I hate Camallanus, and I hope I never see it again. In my experience SE Asian bred Apistogramma are riddled with it.

Daneland said:
I was hoping camanallus worm would die eventually. But I still can see some tiny little worms on wood. I am not sure they are camanallus
Click to expand...

They won't be Camallanus, they are likely to be harmless detritus (Naididae) worms.

Edvet said:
and see if he can prescribe Levamisole
Click to expand...

I used Levamisole successfully, I bought it as "Harka Verm" for cage birds from Ebay.

Daneland said:
Levamisole does not kill it but stuns it.That is how it works.
Click to expand...

@Edvet really is a vet.

It didn't work for me, I think a lot of Camallanus strains are <"resistant to Flubendazole">, I don't know about Levamisole HCl resistance (Ed may know?).

dw1305 said:
It didn't work for me, I think a lot of Camallanus strains are <"resistant to Flubendazole">, I don't know about Levamisole HCl resistance (Ed may know?).
Click to expand...

Another one to the list.. I once asked a vet about Praziquantel and planaria.. She said it should do. In my case it didn't, at least not with adviced dosage. They seem to be resistant to Prazi as well.. I did put it to the test with catching some worms and added a extreme high dose of Prazi, it did kill the worms. But i doubt such a high dose in an aqaurium is advisable.

But NoPlanaria definitively works and also dissolves very good into water.. And 50 grams from th eregular package is enough for many years to come.
Cheers,
Marcel..
Tanks for watching.

Can someone identify what they are. They look like small daphnia in size, spherical, rather active and move fast on the glass wall and substrate, occasionally but rarely dancing in the water column. They are not daphnia because their motion is not Jerky, and they are too small for me to see if they have any antennae. They are not copepod (no antennae or tails I can see) or seeded shrimp (not elliptical and lacking antennae I can see). I’m not able to provide pic because they are too tiny to be captured.

tiger15 said:
They look like small daphnia in size, spherical, rather active and move fast on the glass wall and substrate, occasionally but rarely dancing in the water column.
Click to expand...

There are some small and very speedy Ostracods (Seed-shrimp).

Have a look at Cypridopsis vidua

With reference to the video, mine look like the slow steady moving critters clinging to the glass, not the fast moving big critters rushing in the water column. Mine are spherical, and this is why I initially ruled out seed shrimp, but they could be. I got mine from my daphnia tub, but due to high temp outside, daphnia population is very light.

Very interesting, took me back to my pond dipping days.

My money is on copper moving through the water column from one electrode to the other. Copper sulphate is often suggested as a reagent to kill hydra but copper ions are left in the water. The electrical method should not leave copper behind. Still do a 50% water change though. Opportunities for someone to do some research. More power Igor.

Can anyone tel me what this bug is and if I should do something about it:

I get these all the time, I think it's just a sp. of aquatic oligochaete worm. They never really last that long; free source of live fish food....
.
Aquazeitgeist. YouTube
A Brief and Incomplete History of Aquascaping. Soil Substrate Planted Tank - A How to Guide
Schism Reimagined. NatureScape. Return of the Shallow. Windswept Eternity, Primordial. The Dark Side or What Lurks Beneath

A very interesting article about Planaria: 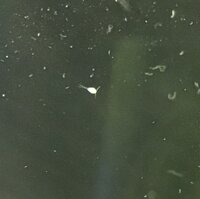 brasco said:
Think this is one of those Copepods maybe
Click to expand...

How do you all get such good photos of these bugs? I’ve just tried after spotting some little critters and all I got was a blur and a lovely shot of the dirt in my tank!
(My excuse is that I stopped the filter to clean the tank and that’s how I spotted them!) 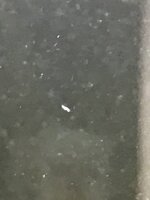 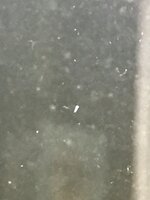 I can’t help thinking that Electricity should kill most things if it’s applied in the right way at a suitable voltage? Surely someone has done some research into this sort of thing?

MartinP said:
How do you all get such good photos of these bugs? I’ve just tried after spotting some little critters and all I got was a blur and a lovely shot of the dirt in my tank!
(My excuse is that I stopped the filter to clean the tank and that’s how I spotted them!)
Click to expand...

Silly question, but does it have legs?

I think a damselfly larvae came in with my shrimp! It's white/pale green (looks a little like a lacewing only underwater and wingless) with three or four fins on its tail and it moves fast and way more fluidly than the shrimp, to the point where I thought some kind of small fish had hitchiked in.

I'll see if I can get a picture once everything has settled down some, but should I try to catch it and release it in the pond outside or just leave it? How voracious are these dudes? I have a starter population of 15 shrimp in my 54l now and I'm not overly keen on losing the whole lot for some lil dude who isn't even supposed to be there lol
If wishes were fishes, aquaculture wouldn't cost so damn much XD
You must log in or register to reply here.
Share:
Facebook Twitter Reddit Pinterest Tumblr WhatsApp Email Share Link