Hi,
The first link, the manometer is not really a good idea. A complete CO2 regulator should have both a gauge showing the remaining pressure of the bottle and a separate gauge showing the output pressure of the needle valve. From the units on that gauge it appears that this might measure bottle pressure as these are high pressure units but, again, this is unclear as it might measure high output pressure depending on how the plumbing is set up. It could be that the valve under the yellow cap regulates the high pressure by the amount of turns in a similar way as a needle valve regulates low pressure. That too is unclear so I'd get that clarified.

The second link is of a needle valve which is fine if your regulator does not come with one. If you were planning to add the second item to the first then you still have the issue of not having a low pressure output gauge, so you'd be well advised to add that as well. Again, the low pressure gauge isn't absolutely essential (as one could just observe the bubble rate) but it does give you more information which is nice to have when troubleshooting a problem.

If you were going to order from that first Hong Kong vendor it would be a much better idea to get the item shown as Dual Gauged CO2 Regulator + Solenoid Magnetic Valve R2. In the long run it's likely to be a false economy getting just the other two. You don't have to use the solenoid, but you might someday wish to do so and then all you'd have to do would be to add a UK adapter and to plug it in as opposed to buying and assembling a new solenoid. Again, solenoids aren't just a convenience. They allow you to drive the tank to much higher CO2 levels than can be achieved via 24/7 CO2 which could be critical for the more difficult plants or for plants in large tanks for example. This may seem as irrelevant or obscure reasoning now, but as you progress you may rue the day you decided against it. A lot of these nuances and ramifications are completely glossed over when looking at advertisements or when just looking at pricing at the first go. People tend to pay a lot more attention to, and are willing to spend more money for exotic lighting than for their CO2 rig, but it turns out that the CO2 regulator is at least as important as lighting, if not more so. :idea:

I get what your saying, the problem is, I'm not looking at change out of Â£60 once you include delivery, and I have to admit to being worried about investing a huge amount until I can see some results from me trying to get plants to grow.

the tank that has worked the best for me planted wise, receives no maintenance, other than the occasional top up (theres no shrimp or fish in there) and is soils/sand based. whereas when I've done things "properly" its been a bit of a disaster.

PsYcHoTiC_MaDmAn said:
I get what your saying, the problem is, I'm not looking at change out of Â£60 once you include delivery, and I have to admit to being worried about investing a huge amount until I can see some results from me trying to get plants to grow.

the tank that has worked the best for me planted wise, receives no maintenance, other than the occasional top up (theres no shrimp or fish in there) and is soils/sand based. whereas when I've done things "properly" its been a bit of a disaster.
Click to expand...

Believe me the difference between injecting CO2 and not is just huge, and if you're into your tanks it's well worth the cash.

That link you've given is an argon one and not a CO2 one, it's unlikely to have the right thread on it - you'd need an adaptor.

There's this one, no idea if it's any good though.

Alternatively there's the HK one with the solenoid and needle valve included.

That regulator is for an industrial size bottle and won't fit an aquarium/pub/fire extinguisher bottle.

MikeC said:
I just bought a wave regulator with solenoid for Â£53.76 delivered.

That seems like a good buy. I'd be interested to hear how you get/got on with it.
L

I got a link to this page and was glad I did!

How did the last one get on. I dont think it was the person that bought it, but rather they were commenting on someone elses purchase, but it did seem like a good deal.

Can soome please advise meif its okay to have the valve NOT vertical? The 2kg FE will fit under my tank in the units cupboard, however I will have limited height available and I am not sure some of thesewould fit when set up verticaly.

If fitted as it comes, the wave regulator only adds approx 4cm to the total height on the FE that I use, because the output from FE is well below the height of the handles. In case you didn't know, the regulator nut that fastens to the FE is on the back of the dials and not the bottom. Don't forget there's different height 2kg FEs as well.
I can't comment on 'vertical' question.
HTH
L

Hey thanks for hte reply.

I didnt realise they came in different sizes. Mine arrives today, so I will see how large it is then.

Has anyone ordered one of these yet: CO2 Regulator Dual Gauged + Solenoid Magnetic Valve R2

It was mentioned earlier in the thread.

What are the options with regs from the uk or at least europe? i got my defuser from malaysia and it took a month to get to me. i dont want to wait that long for a reg and solanoid and i also dont want to pay the earth for one from a normal shop has anyone got one from somewhere that they can reccomend?

The wave regulators from firststop aquatics are excellent, I've had no problem with mine. Look back in this thread for a link.

i have just ordered my reg from here
http://www.firststopaquatics.co.uk/acatalog/Pressure_Regulator_with_Built_in_Solenoid_.html

it is same as mine, worked been fine for past 6 months no problems what so ever
T

Same shop and same reg as mine, no problems so far. A bonus is not losing Â£20 + in postage costs from far east if it goes wrong.

The firststop one is looking good.

Does the solenoid make any running noise buzzing as mentioned elsewhere for other kit?

Is the fine adjustment up for this being used for nano tanks ie down to 1 bubble every 5 seconds etc?

I don't hear any noise from the solenoid.

Not sure about the 1 bubble every 5 secs, I use way more than that.

Tigermoth said:
I don't hear any noise from the solenoid.

Not sure about the 1 bubble every 5 secs, I use way more than that.
Click to expand...

I just bought this one from 'First Stop Aquatics'.

I cant seem to work it out and I want to avoid A) blasting all the CO2 out in one go and B) Blowing my head off.

Please see below for a pic and I would really appreciate it if someone can tell me what the screws/knobs do where I have numbered them.

Also.. there are no instructions on how to turn the solenoid on or off or how its controled. ie if it has power does it stop or allow the CO2 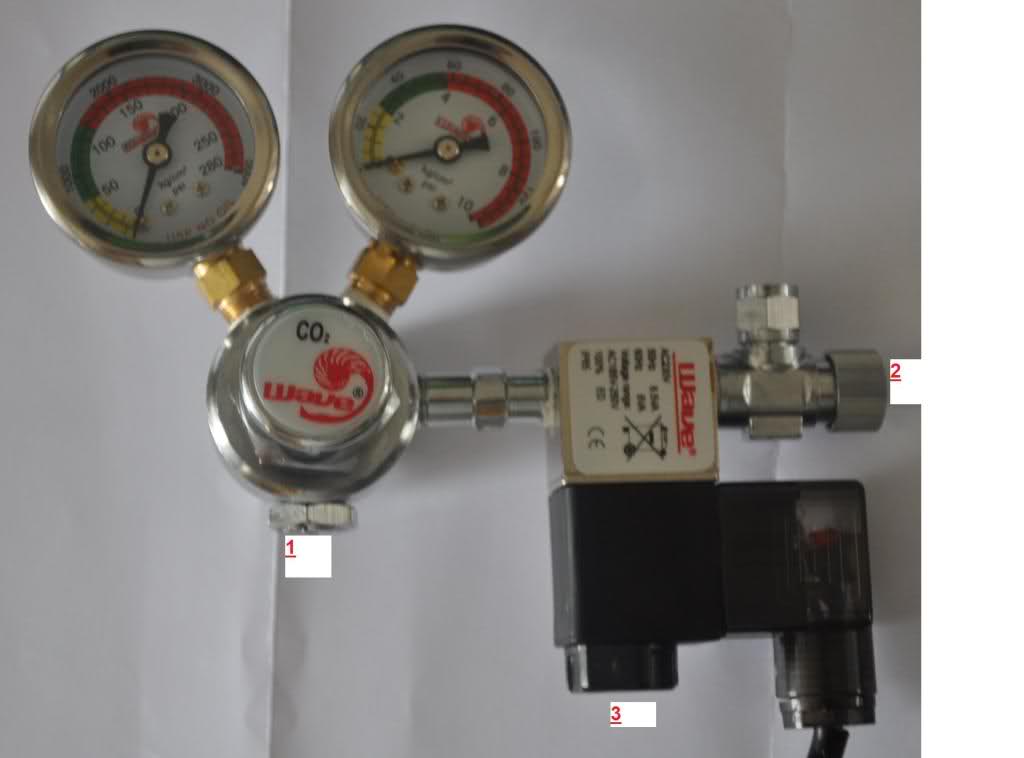 Lee, number 2 is the needle valve adjustment, they are very sensative.
The solenoid will be in the off position when there's no power going to it, so get a timer to plug it into and set the hours to send power to the solenoid when you want the co2 running. I'm not 100% sure what numbers 1 and 2 are, but you don't need to touch them. Just screw the large silver nut that's behind the main dial (the bit with the wave sticker on) over the FE output, keeping the safety pin in and handles apart while you do so. Post back if you get stuck, or get your mum to post back if you've blown yer head off.
J

I don't see the point of getting that reg, it's gonna cost Â£67 with postage. The Wave ones in the link above are only Â£53.76 inc. delivery and several members here are using them including myself. As far as I know, no one's said a bad word about them yet.
You must log in or register to reply here.
Similar threads