And now for the video;

Television is reality and reality less then television
T


aaronnorth said:
How about a HOB filter for the 5g, Â£10 - Â£20 depending on size from aquatics online.
Click to expand...

No can do, the tank is a very fiddly design and the lid doesn't come off entirely, infact you can only take half of it off, the rest is fixed on so I'd have to have a HOF(hang on front)

thanks for the suggestion though

The tank won't be staying that way for very long, I'm going to move the cherries into my 16G to replace the amanos who will be going in the 35G and then I'll be turning this into a betta tank. The rocks will be going into my arcadia tank when I evetually get it which will be for dwarf puffers.

Just a quick update, if you could call it that, it's just some more pics really, nothing has changed, just a little bit of growth. 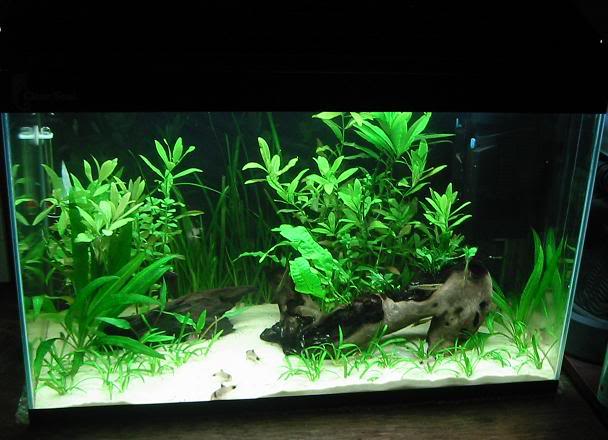 and finally the goldie tank in all it's random glory; 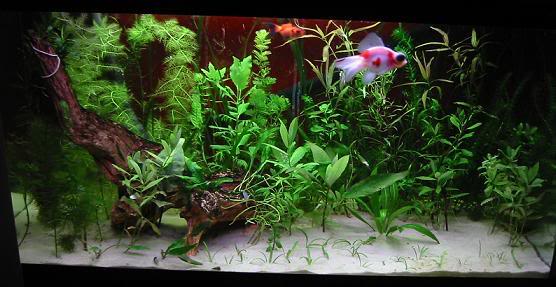 Television is reality and reality less then television
T

Looks like you need to get in there with some scissors

Been a while since I updated, my little girl has been very ill lately(ongoing problem) and I've been so wrapped up with keeping an hour by hour record of her and taking her to the hospital that my plants have been neglected a little, I kept up with water changes / dosing but just haven't had the chance to prune them. I still haven't had the chance to have a good go at them as I'm really tired today after a rough night / day but I did my best. The goldfish tank is still a jungle, except it's a very overgrown jungle, I haven't got the time to do that tonight so I'll post some pics on thursday after I've tended to it. Anyway here are the pics, first is the 35g;

The sword I took out of the panda tank has really taken off in this tank, it's grown very big very fast; 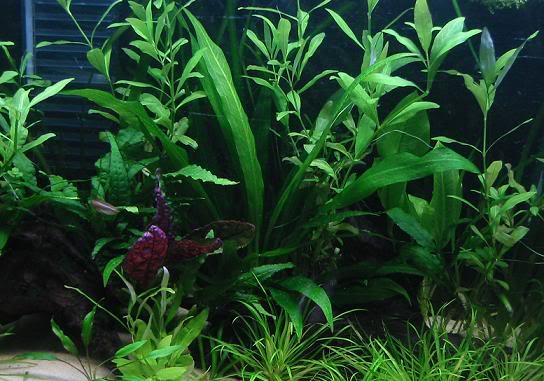 left side of the tank; 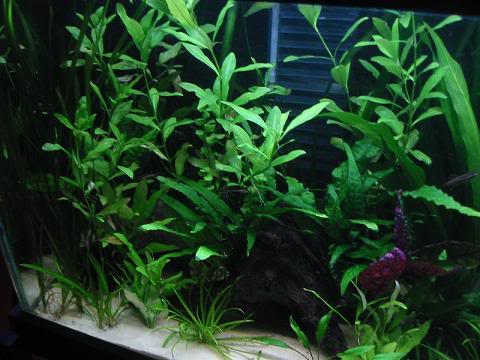 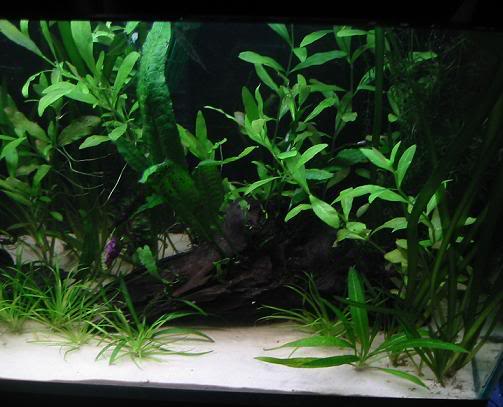 I've also removed the bronze corys from this tank, they are in a lovely new home and I'm hoping to get more of the golds, if maidenhead EVER gets them in again, I knew I should have bought more when I saw them! I've also transferred the amano shrimp over from the panda tank, the amanos have become quite aggressive and I don't know why they have basically been bullying the panda corys and stealing all of their food so I figured a change of scenary would be good for all of them.

Here is the panda tank, the trili corys are now gone and I will be putting some cherry shrimp in here at some point, 2 of my cherries are carrying eggs so I'll put the adults in this tank eventually and keep the 5g as a baby cherry tank. 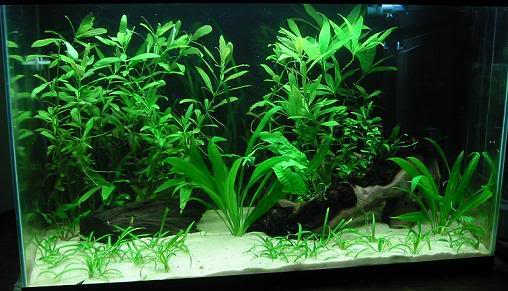 and here is the cherry shrimp tank, as usual most of them are hiding behind the rocks; 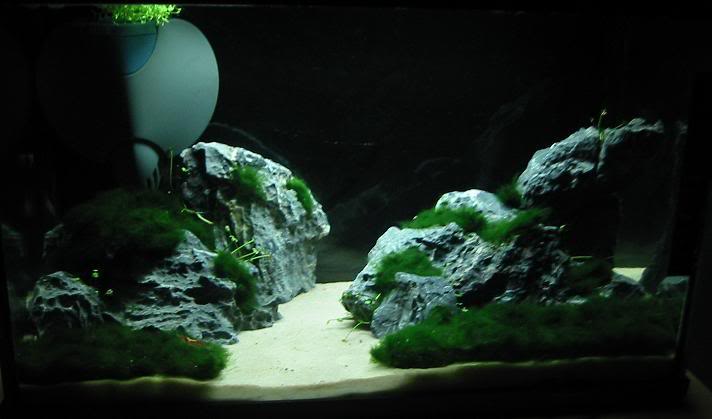 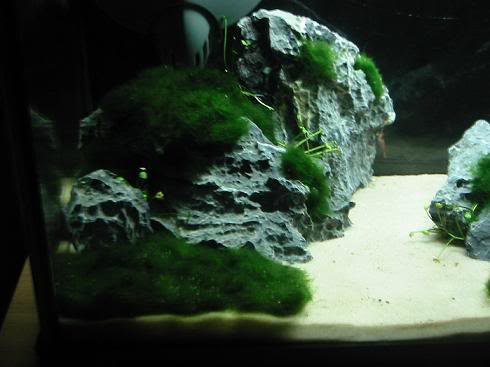 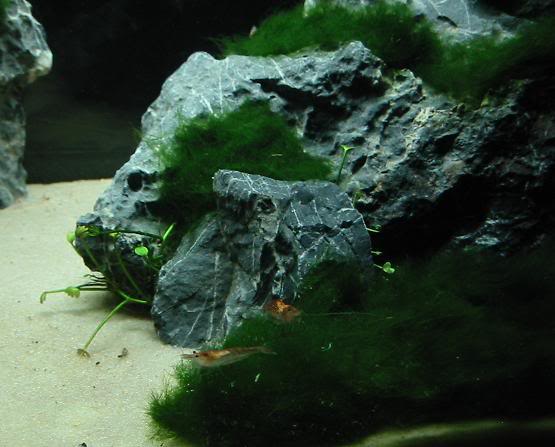 London dragon - thanks I quite like them overgrown, I think it looks more natural, I've basically just trimmed the tops off the H.Polysperma & Vallis and a few old leaves. It's all going to get stripped down in a few months anyway so I don't mind how mad it goes

Arana - thanks for your lovely comments hopefully she will be better soon.

I'll give you all the short non yuk version of what's going on with her, basically she's been having bowel problems for months, we've been back & forth to the doctors and finally to see a paediatrician last monday. There are 2 possible causes to her problems 1 is severe chronic overflow constipation which can be treated with laxatives & diet, the other is a rare disease which will require a biopsy to confirm and at least 1 maybe 2 operations to rectify it, obviously I'm hoping it's the first possibility, but we won't find out for another month.

Fingers crossed for her! All the best

Thanks guys Back at the hospital on monday, long story but we can't get her to take her medicine so we're having to switch to something else but the paediatrician wants to check her over again, then we don't have to go back until june 11th(hopefully).

Re: My first journal - Multiple tanks

Azaezl said:
Well all I can say is I'm very annoyed, I hate how the tank looks now even more then I did before, the thing that annoys me most is I can't get a backgorund on this tank and I'm stuck with my bright red walls as a background!
Click to expand...

Can you not slide a sheet of acrylic behind in the colour you'd like. I know it's not quite as good as an actual background but it might be better than the red.

I had great 'fun' fitting my plain black background... note to self, in future always leave a little more than a hand width between the back of the tank and the wall behind! Vaseline got on everything, it was a nightmare keeping it out of the tank during the process... and it still has some bubbles which I can't get at
Click to expand...

Hi do you use vaseline to stick the background onto the glass, I have always wondered what the best method was to get the air out between the glass and the background. Once used spray adhesive

won't do that again!

I also fitted a set of castors (heavy duty and lockable) from IKEA I think. You could move the whole tank about after taking about twenty litres out to stop the sloshing around while you moved it. Very convenient for rewiring and getting round the back when you need to.

Re: My first journal - Multiple tanks


REDSTEVEO said:
Hi do you use vaseline to stick the background onto the glass, I have always wondered what the best method was to get the air out between the glass and the background. Once used spray adhesive

Yup, smear it over the back of the tank, apply the background then smooth out bubbles with a credit card (or in my case an old loyalty card I don't use any more), then seal the edges with tape, I used black electrical insulating tape.

I also fitted a set of castors (heavy duty and lockable) from IKEA I think. You could move the whole tank about after taking about twenty litres out to stop the sloshing around while you moved it. Very convenient for rewiring and getting round the back when you need to.
Click to expand...

Hi Azaezel,firstly i will pray for your little girl and i sincerly hope they sort her out soon and makes a full recovery,the tanks look great under the pressure you have at the moment,regards john.
www.johnstarkeyphotography.co.uk
A

I prefer the overgrown look too, good luck to you & your little girl
Aaron North
My Flickr Account | Equipment needed for setting up an FE | Algae & Nutrients

Couldnt read this Thread without Wishing you and your little'n well.

Azaezl said:
Thanks guys Back at the hospital on monday, long story but we can't get her to take her medicine so we're having to switch to something else but the paediatrician wants to check her over again, then we don't have to go back until june 11th(hopefully).
Click to expand...

Just re-read the last few posts and spotted this, hope everything went well on the 11th and that progress is being made.

Thanks for the well wishes everyone, no change, we've swapped her medication for the 3rd time she's now on medication that is alot stronger (it's not really designed for children under the age of 10) and so far it doesn't appear to be working but she's only been on it a week so I guess it's early days. We have 2 appointments in July, one to see the paediatrician again and another to see her nurse at the bowel clinic which will be a regular thing until she's 100% better which isn't likely to be until at least next year(they told us that she'll need to be on medication for at least another 6 months). It's difficult sometimes, it's her birthday on wednesday and I'm just hoping it won't be a bad day for her accidents because I want her to have a really nice day. We went up to liverpool to visit my relatives at the weekend and they had a little teaparty for her but she was just miserable the whole time and was getting very upset because of her accidents and just clung to her dad virtually all day. We are supposed to be going to a theme park next wednesday as well but I'm dreading it because of how upset she'll get at having to go in a public place. We were hoping to start her in pre-school this september but I don't think it's going to happen as it will just upset her so much being around new people / kids and having accidents. It's really awful so I'm just hoping that this medicine works and soon because I want her to be happy & healthy again and not have to go through all the pain and embarassment that this is causing.

My tanks haven't changed much really, again I haven't been keeping up with pruning very regularly so they are all a bit wild and pretty rubbish but I'm setting up two 4ft tanks soon and I'll be closing down the smaller tanks so hopefully by then I'll have more time to keep ontop of things. I did however get the chance to move things about a bit in the panda tank and they must like it because they spawned last week, I didn't save any eggs though as I knew I wouldn't be here to take care of the fry because of the trip to Liverpool. Anyway here's a photo; 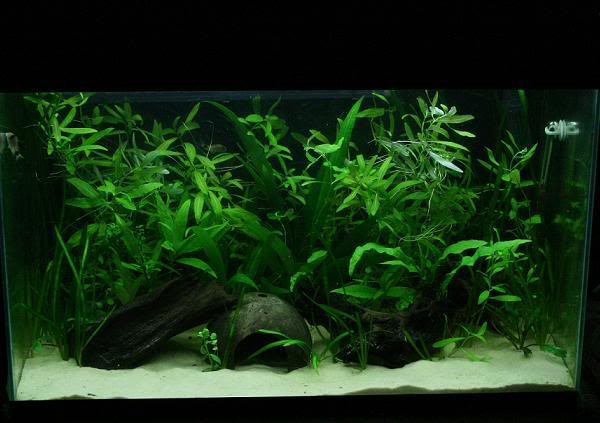 Television is reality and reality less then television
You must log in or register to reply here.
Similar threads