Hi - first nano scape. 15ltr Flexi-mini set up. This is it unplanted (apart from a random crypt i got free with some tweezers at Pets at Home!). 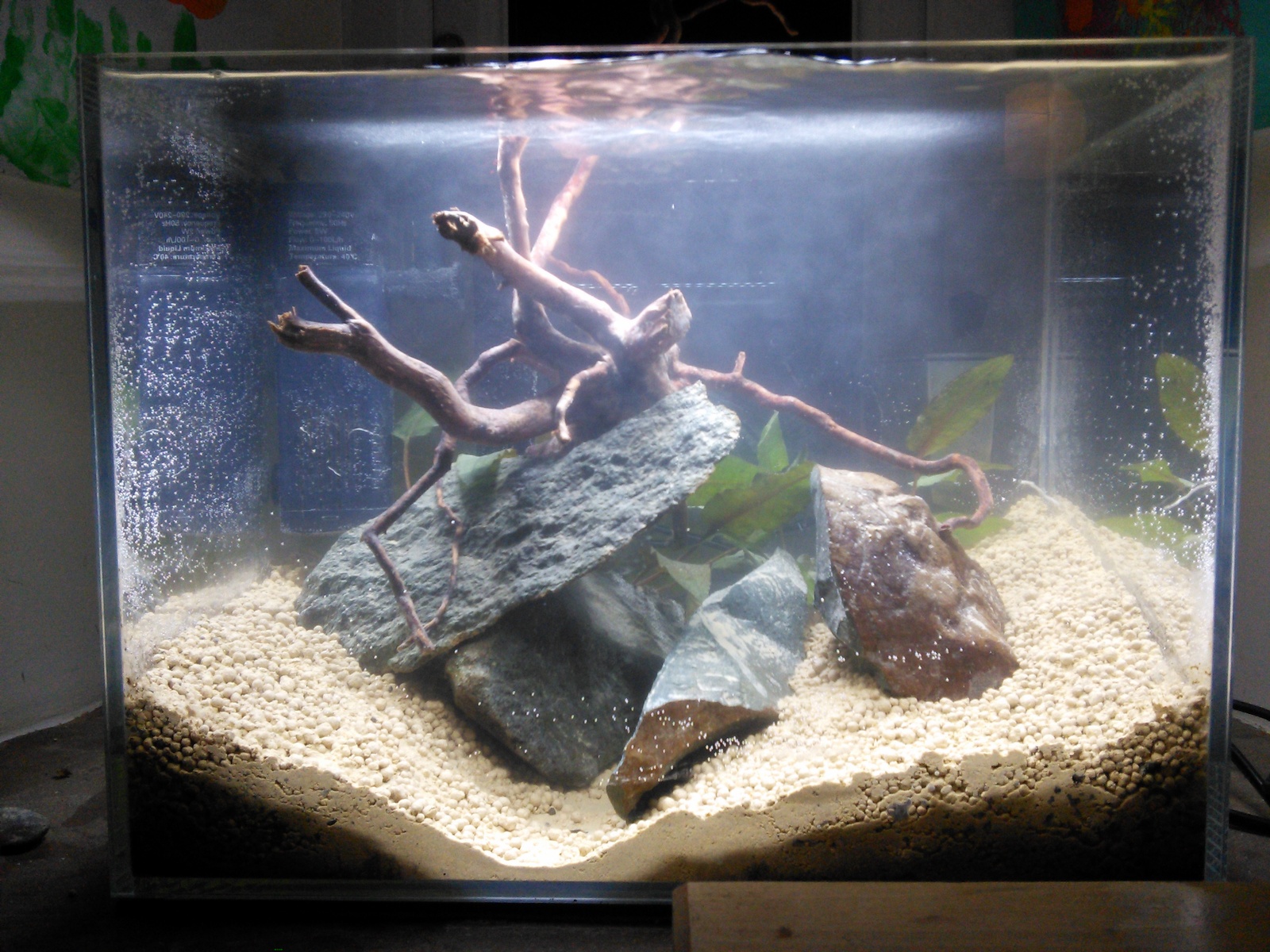 1 week in and have added 6 cherry shrimp and 3 very small cherry barb (who may end up in my bigger tank when they grow larger). 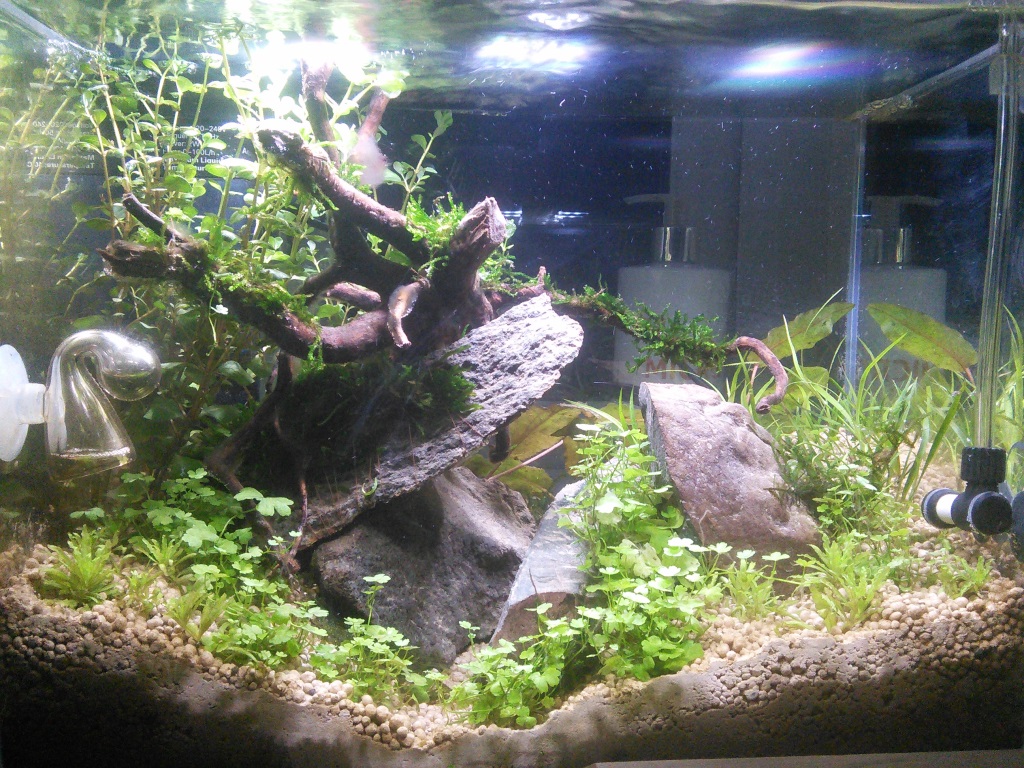 Currently lights on 5 hours a day, co2 on/off 1 hour before. Lights are 'tinfoiled' to reduce intensity just now. Using Co2Art easy EI Macro & Micro. Substrate is the dutch/german? stuff you get from Maidenhead Aquatics. Filtration is from small internal with spray bar, a lot of flow.

Brilliant! Cracking wee tanks, I like what you've done with yours!

Mmm, i now have no Cherry Barbs - they've all committed suicide by jumping out of the tank in the space of 24 hours. Found some small desiccated bodies on the kitchen floor.

There's no cover on the tank, i should probably be looking to have the water a bit lower than right to the brim.

Hi Kezzab, Sorry to hear that about the fish Best idea is to put a plastic lid on the tank.
Regards Roy

Only issue is there's a bit of stick sticking out the top... 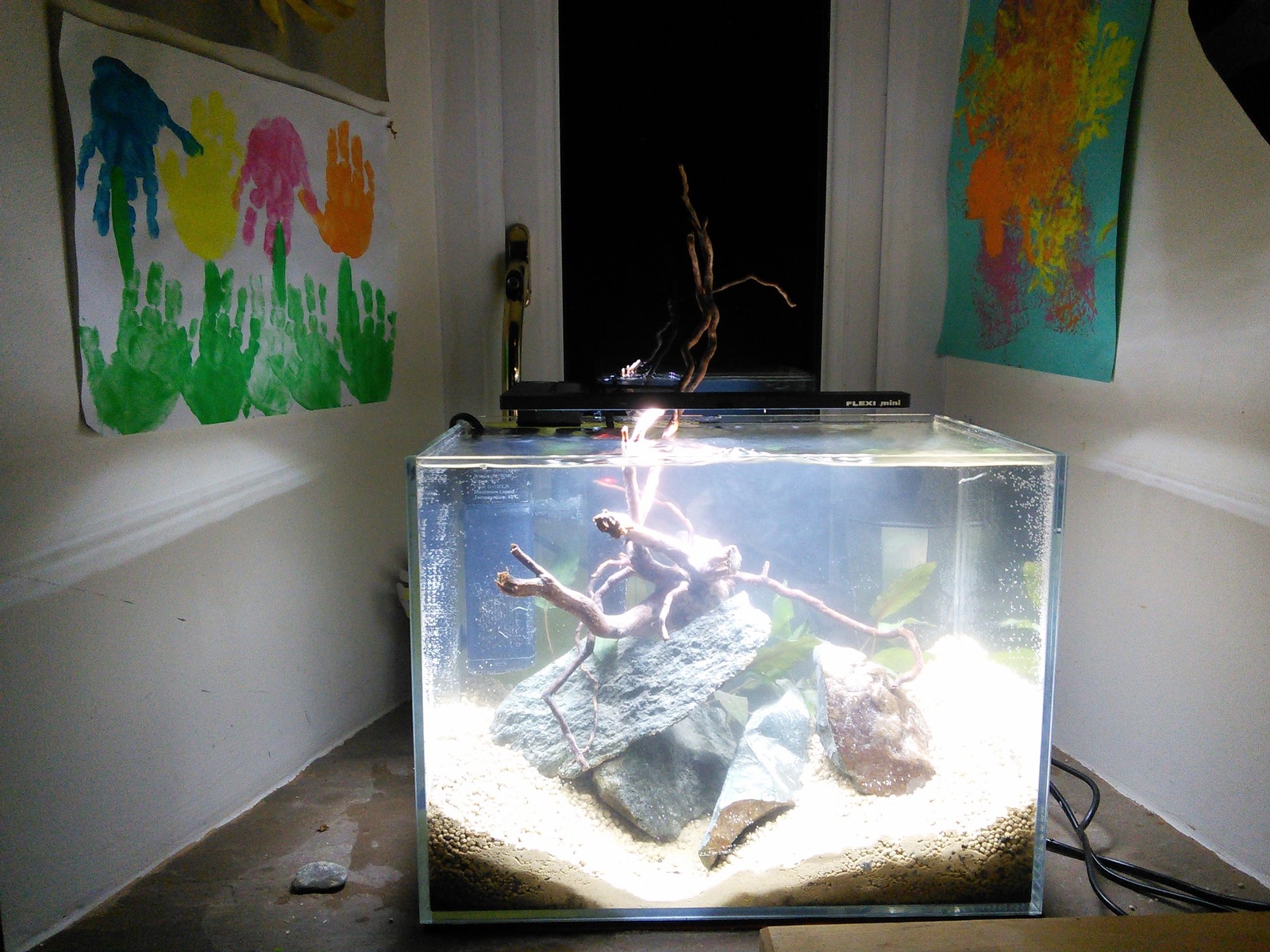 Hi Kezzab, Easy cut a square out as close as you can to the DW
Regards Roy

Hi,
We're almost 4 weeks into this tank now and it seems to be going relatively well.

A few minor issues however:
Other than that, no disasters so far. Fingers crossed.

I'm not much of a photographer... 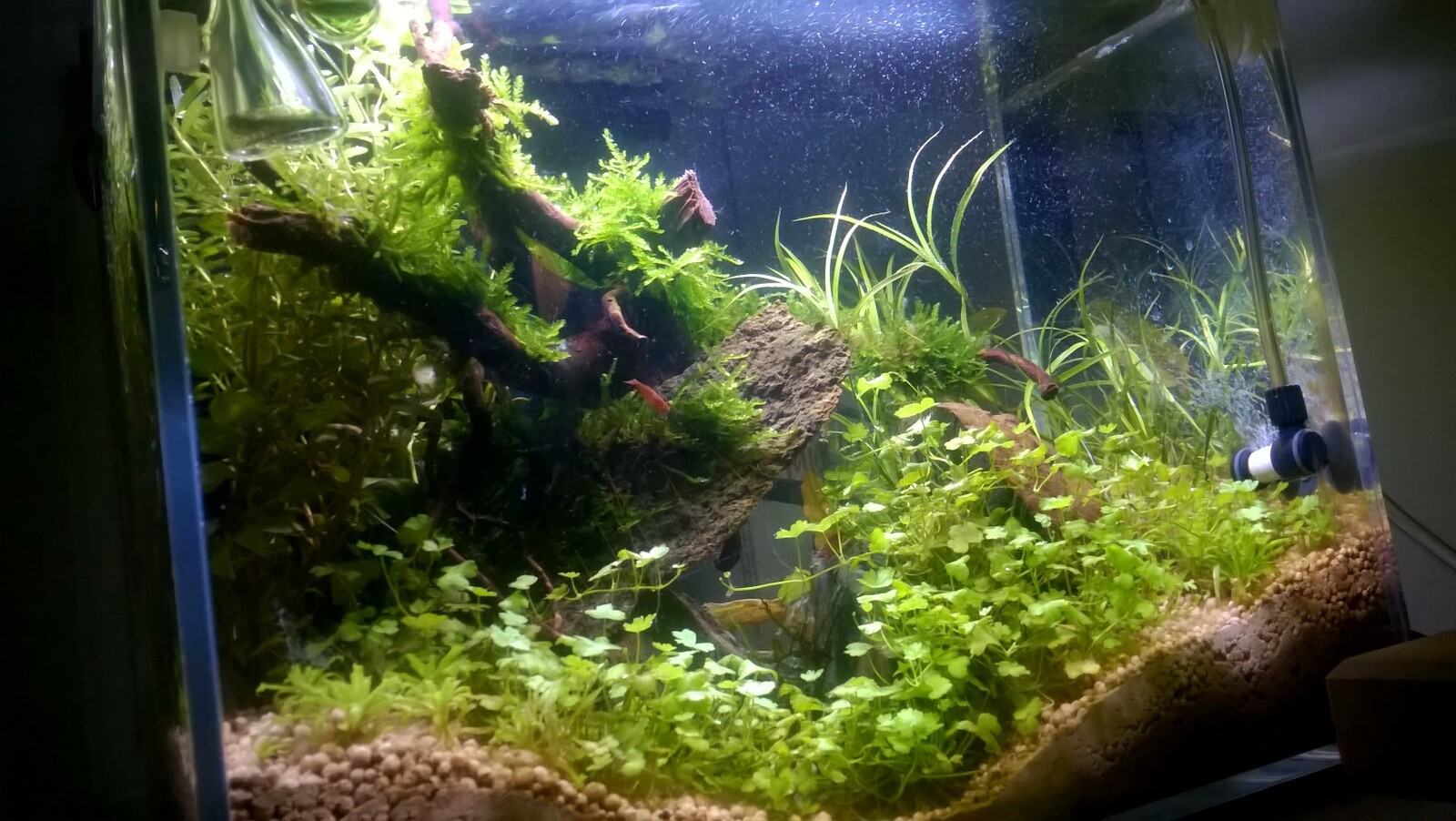 Hi Kezzab,Looking good. Have you got root tabs in the substrate this may help the Hydrocotyle tripartita to look better

Not too sure others will know more. I think you should be dosing 3ml a day with EI dosing
Regards Roy

My Odessa Barbs all jumped to their deaths, even with the water surface an inch from the top. I was told to ensure there was ambient light over night, but they still jumped. Lost 5 within a couple of weeks, only stopped when I put a plexiglass cover on. It seems Barbs like to jump and are very capable at doing so.
Mark
Closed: Round Two
Closed: Aurora Aquatica

I've only kept Odessa's in lidded Juwel tanks so no issues with finding them on the floor. I did find one in the filter though!

Not had any jumping issues with my cherry barbs. One thing I have noticed (and has been responsible for a few fish deaths in the past) is that the flow forms a crest right at the front of the tank and it would take almost no effort for any fish to be up and over the side at that point and onto the floor.
Last edited: 19 Feb 2016
Current tanks coming soon...
CLOSED: My 'Splendid' Tank - Epiphyte Tree - Crystal Red Shrimp - My Low Tech Scapers Tanks

Gave the Rotala a fairly brutal trim, down to about 2 inches of stem - i think this has then destabilised things by removing quite a high proportion of the biomass from such a small tank, and induced a bit of an algae attack. Not excessive so far, but Staghorn has appeared on the Juncus Repens, some thread algae appearing randomly and a bit of greenspot on the hardscape.

In response i've increased the length of time the Co2 is running (now from 10am to 9pm), kept the lighting period the same (5pm - 10pm) but have reduced the intensity by approx 40% (i'm just covering some LEDs). Worth noting the tank is on the windowsill of a small east facing window.

I've also put a small amount of activated carbon back in the filter - slightly confused on this front as I've read in some places you should remove it, and then in others that its necessary if you are dosing EI???

Interested to hear view on whether i should continue dosing as i have been from day 1 (ie standard EI) or should I maybe try increasing (2x EI)?

Things seemed to be sorting themselves out, then... the light goes on the blink, literally. It now just flashes on and off. Will be going back to the shop!
In the meantime we have the attractive solution of balancing a spare light on the top. We'll see how that affects growth/algae etc... 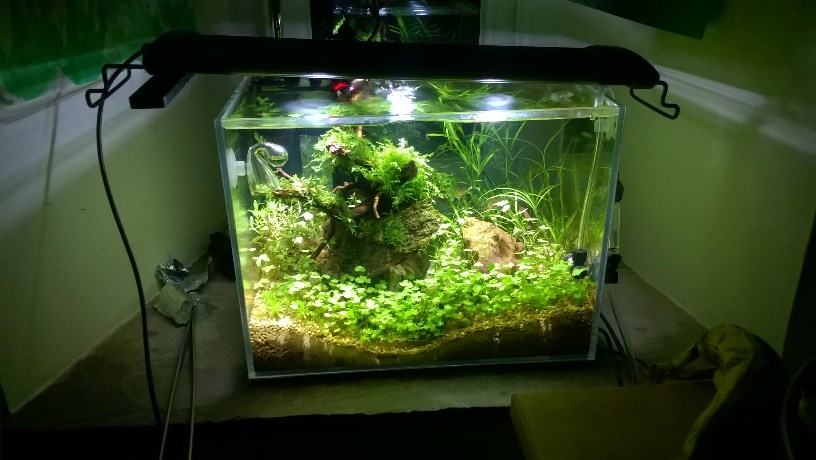 Kezzab said:
Things seemed to be sorting themselves out, then... the light goes on the blink, literally. It now just flashes on and off. Will be going back to the shop!
In the meantime we have the attractive solution of balancing a spare light on the top. We'll see how that affects growth/algae etc...
View attachment 81257
Click to expand...

That looks solid, I'm jealous; had my eye on getting one of these little tanks for ages!

Tank is looking awesome, shame about the dodgy light!

Great little scape! Sorry to hear about the light issues - I was looking at getting one of these tanks and the sleek light was one of the most attractive features - hope you get it sorted.
A

These lights have been around a fair bit & very few complaints (some observations that intensity was lower than expected - manufacturer has responded with a new higher intensity model revealed late 2015 - perhaps your kit has the new model?) so I expect your replacement light will be fine - hopefully your shop will just swap one out from an instock kit.

Tank is looking good well done on the management!
You must log in or register to reply here.