Hi guys after a little nudge from Alastair to start up a very early journal here goes lol..
Over the Years iv had a massive interest in fish (mostly catching them) as a keen Carp angler and also been turning my hand to a little gardening..

Iv had many tanks as a kid full of algae, multi colored stones, haunted house and deep sea diver figures.... and the odd fish in there somewhere too lol. anyways moving on lol..

After many years from the hobby it was my dad who got me back into things after helping setup his Fluval Edge 46. I brought a few mags saw a few planted tanks and then found you guys .. and after seeing some of your Journals they have really inspired me to get into planted tanks and one day hopefully being as good as some of you guys too..

Tank is a new Clear seal (pants i know) but i didn't want to spend hundreds on a tank for me to fail in over and over and for it to get knocked about, but will do until i get the hang of things then ill upgrade. The cupboard is a custom one i made (As a chippy made more sense) from ikea Black/Brown to match some things i already have around .

So here i am and this is were i am right now... 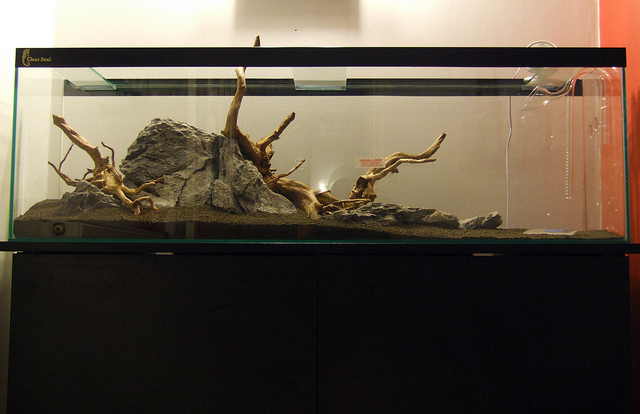 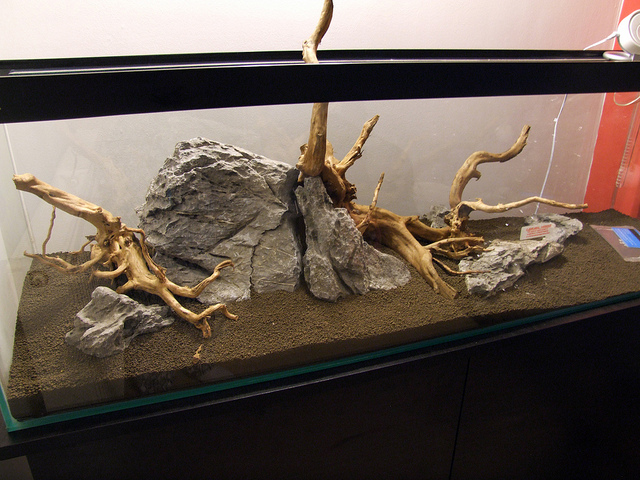 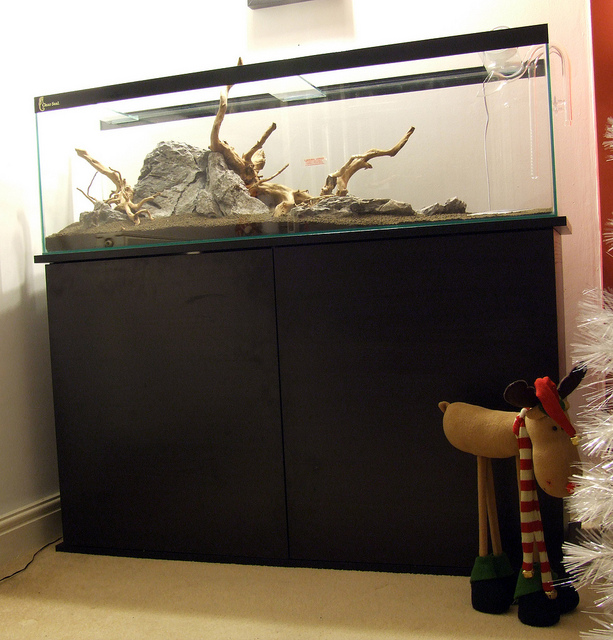 Yes a great start, hard scape is brilliant! With a good start like this with just the hard scape in if you compliment it now with the right plants you will be onto a winner!

Hi Aron,
wow, id just like to say that for me that is the best hardscape I've seen in a long time....it's very unique and a refreshing take.
love the substrate gradient too

very very good hardscape! Looking forward to see how you plant this.
life is like a pot of HC

Ady34 said:
Hi Aron,
wow, id just like to say that for me that is the best hardscape I've seen in a long time....it's very unique and a refreshing take.
love the substrate gradient too

really looking forward to this one and pleased Alastair has given you the nudge.
Great start mate.
Cheerio,
Ady
Click to expand...

wow...... I don't know what too say apart from thanks, for me as a noob to planted tanks ect for someone to say such nice things is great

And thanks too everyone else who has commented too

Anything you would change??

Honestly.. No I wouldn't change anything it looks awesome
Cheers,

Great work mate. I'm looking forward to see next stage and some more photos.
I wouldn't change anything.
IE method with dry salts is the way to go to keep the cost down.
Pressurized CO2 (fire extinguisher) with decent regulator.
Filtration: (Eheim 2173 Professionel 3 350T)

And again thanks for all the comments

Very striking hardscape mate any thoughts on plants yet ?
About time 90x45x45
MiniMal / few scapes in one place
Low tech

Thanks mate but not just yet tbh iv been doing a lot of reading ect to try and get things right.. Stem plants too rear of stone keeping as much to the 3rd rule as possible but tbh I don't know ... I'm still learning names of plants ATM lol

Love the Hardscape! Great use of a tank with those dimensions, I wish I had the vision when I was buying bits to get something that good.

Gonna look great with some plants and fish in there!

jack-rythm said:
great thought and wicked wood.. what wood is that?
Click to expand...

Its Redmoor Root from TGM (as was all the hard-scape) But i could also be wrong lol ... im still a noob

Thanks Tho guys
"Nature's Envy"

Hardscape looks awesome for this tank. Id suggest getting the UP inline CO2 atomizer for your tank. Pick the size after getting your filter so that you know what the hose size is. For plants Id suggest going for a sort of Iwagumi with hairgrass (or gloss) covering most of the bare substrate with just a single row of blyxa at the back. You could do a dry start and also apply a paste of fissidens fontanus to the rocks which produces a really nice effect. The just some anubias nana and/or needle leaf java in the cracks and around the base of the rocks and some christmass/weeping moss tied to the wood.

Damn you I want your tank and your rocks and wood !!!

What is this paste you talk of and what effects do you get?