now its not going to be a hardscape that appeals to all, esp with the addition of the Bristol Bear. But its a family tank in a family room, so design by committee. with a very opinionated client in a 2 and 4 year old.

so that’s how I have rose quartz a a nice dense lump, that in my mind looks like the body and ramus of a cows jaw.

the tanks sumped and just off cubed, illuminated by a Radion G2
the ex marine sumped cube
N

not sure why the pics failed to attach above,
the ex marine sumped cube
N

so fish, coral inverts gone and its a shell of its former self

dismantled and reassembled in a new location and soil added

lights just starting to ramp up to 20%

lights ramping, will chuck the heater in the sump, was there while I leak checked the plumbing
the ex marine sumped cube
N

at full 20% on the pre set planted option

strange how silent they are when not running at almost 100%


bit of scum on the substrate after the return pipe sloughed its biofilm.
the ex marine sumped cube

I quite like the bear.
It almost looks natural, like when you see a natural rock and think it looks like something, - in this case a bear.
N

Excuse the glass, I'm holding off cleaning until some clean up crew are in place. Not that I'm sure what to go for. But on the positive, there's growth to be seen in the leaves and also roots.

Lights on for 6 ish hours now, plus the sunlight in the room and still only at 20% through a bit of perspex. 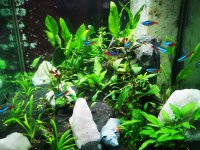 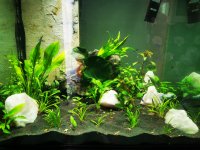 while out today popped into PaH and grabbed some Salvinia auriculata, so now there’s some surface cover

the Java fern seems to be budding and the sword has a flower spike shooting up.

Seems some where at least one snail has made it in, noticed one just pre lights out the other day and there’s a little bit of damage to a few leaves.
the ex marine sumped cube
N

Such a glam Friday night 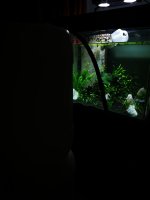 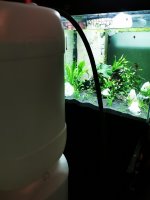 Hoping to be able to ease up on these big water changes soon, currently the tanks way more labour intensive than the reef ever was, but still least the plants have taken.
the ex marine sumped cube
A

not called Bob said:
Such a glam Friday night
Click to expand...

Top down view, to avoid any glass detritus 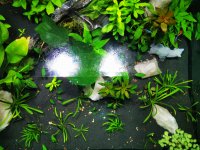 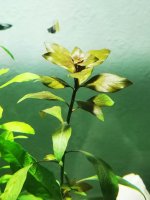 Never brought anything so small before, and that's after having a whole host of gobies before 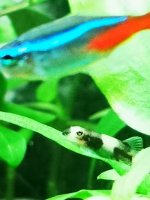 The Cory's have had a little bit of stress from the guppies seeing them as a meal, but seems to have settled.
the ex marine sumped cube
N

remembered I have a filter sock in the workshop, so now any riders of the pipes (almost at one of each species now) will be bagged ready for reintroduction to the tank and not need a bit of hands and knees net work.

also using a sock on the hose to syphon, as everyone likes to come up close to the pipe and managed to catch a Cory as it was about to exit the window and have had a clown goby before get stuck in the opening of a pipe,
the ex marine sumped cube

not called Bob said:
Is bronzing normal in this plant
Click to expand...

Looks like it might be a Ludwigia sp. and a lot of them <"have bronze shoot tips">.

not called Bob said:
The Cory's have had a little bit of stress from the guppies seeing them as a meal
Click to expand...

Not ideal, you may also find that the Guppies get all the food before the Pygmy Cories do?

dw1305 said:
Hi all, Looks like it might be a Ludwigia sp. and a lot of them <"have bronze shoot tips">.Not ideal, you may also find that the Guppies get all the food before the Pygmy Cories do?

I'll try and sort out a culture then, seems to be harmonious in their now, every one swimming about, but always good to give some enrichment and not just one boring meal
the ex marine sumped cube
N

Enough growth to have had to do a round of tip pinching.

Working out of I keep or rage war with the hitchhiker snails, seem to look to be growing into ramshorn and pond snail shell shapes. As yet only squished and fed to the tank the ones that were easy pray. 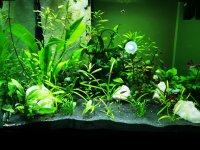 I was asked previously why keep things like the mag on a viewing pane, tonight was a good example of it being handy to be able to see. It could get out, but had I moved the scraper, it might not have been a good ending 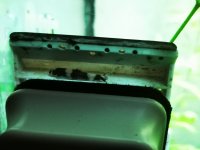 Wanted to see if I still had 4 pygmies and felt like the odd snips now and then had controlled things I now needed to give it a more substantial cut. 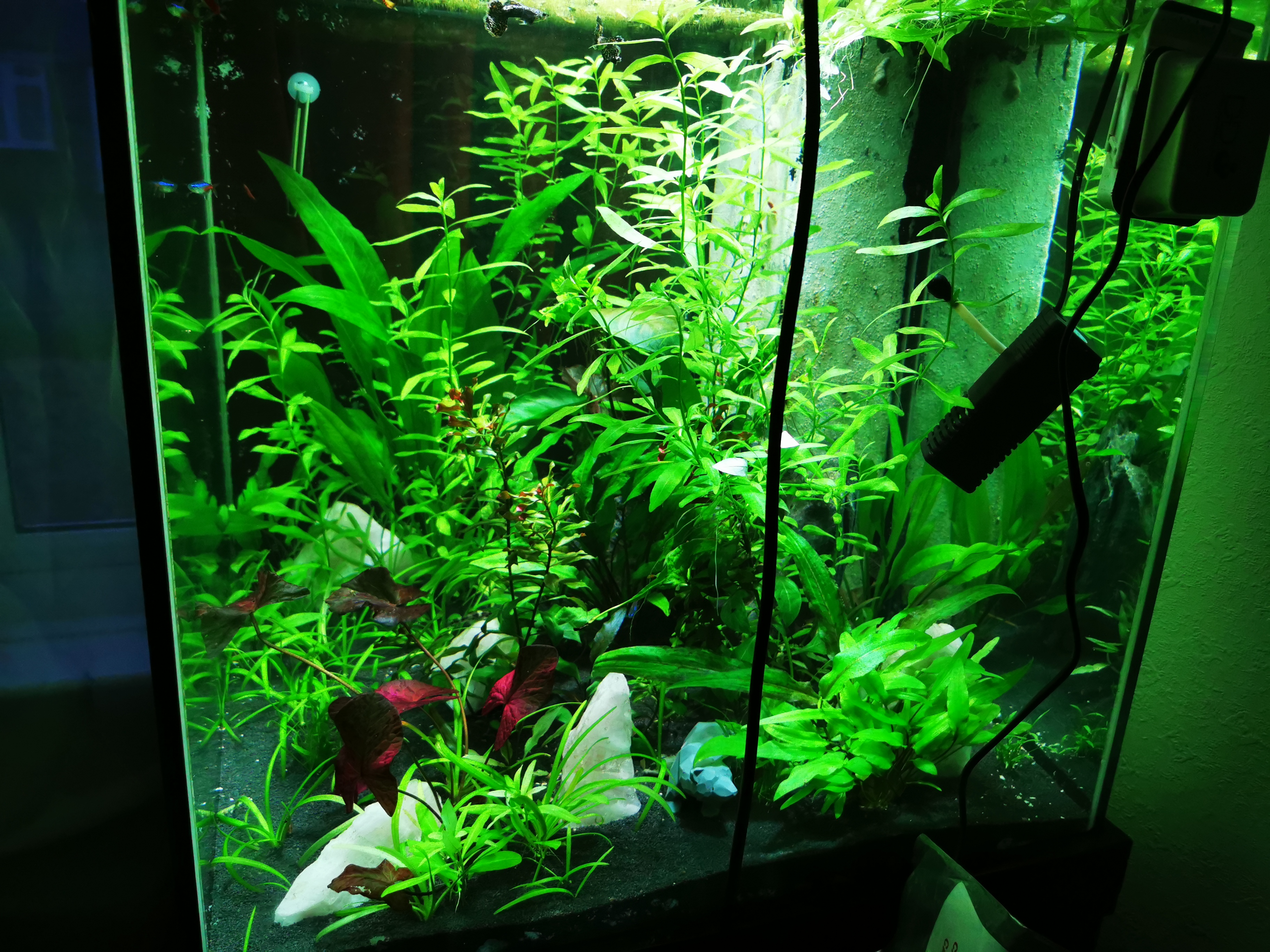 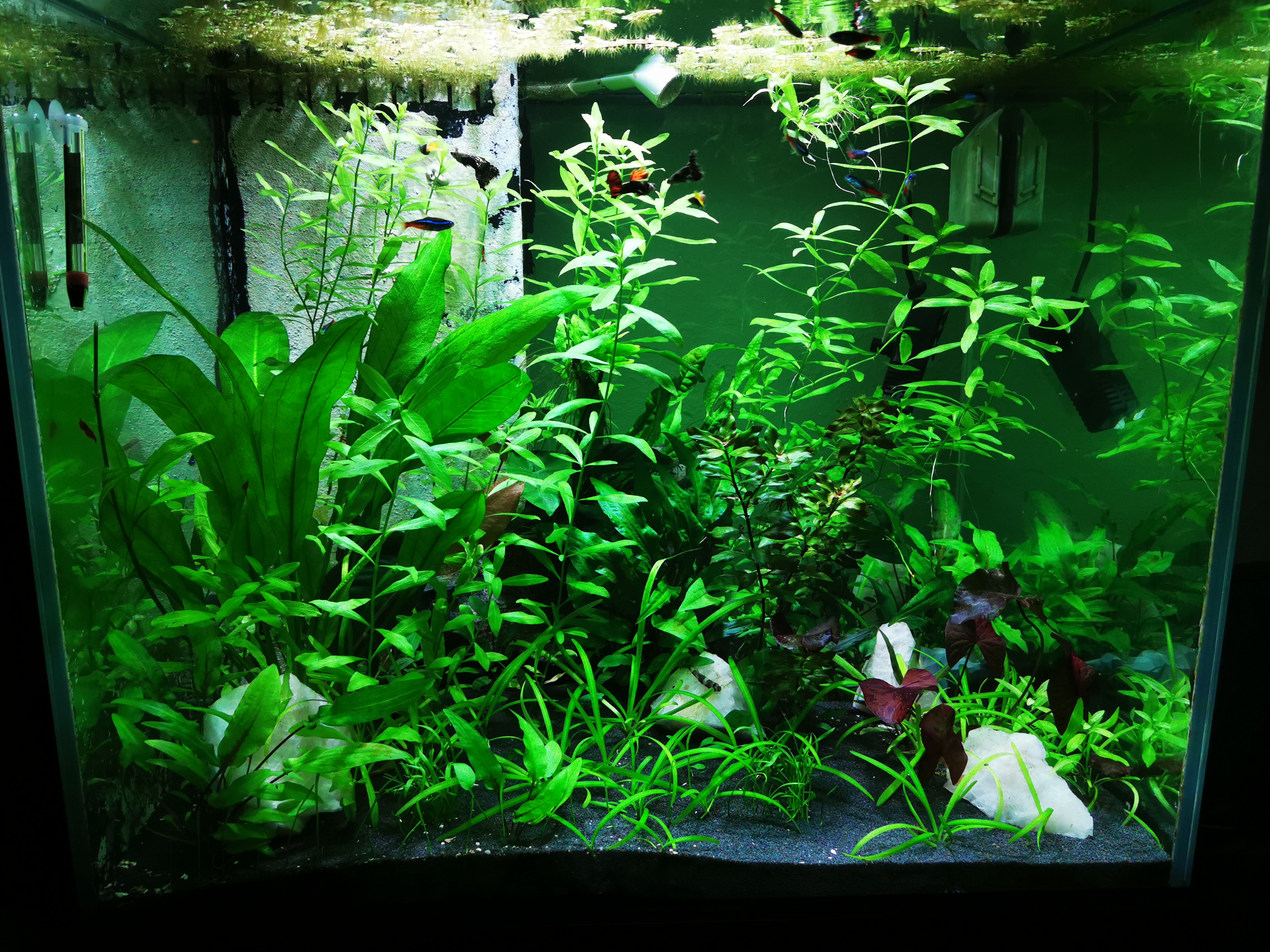 So a load of stems cut and placed back into the sand and the shorter ones composed on the front garden. 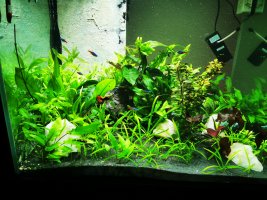 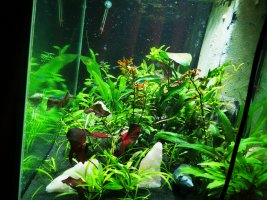 The filters not stuck on as I like a variable flow and tend to move it about each day and it also moves a bit on its own. Must fix the mp40s wetside bearing and have the nice tidy option back
the ex marine sumped cube
N 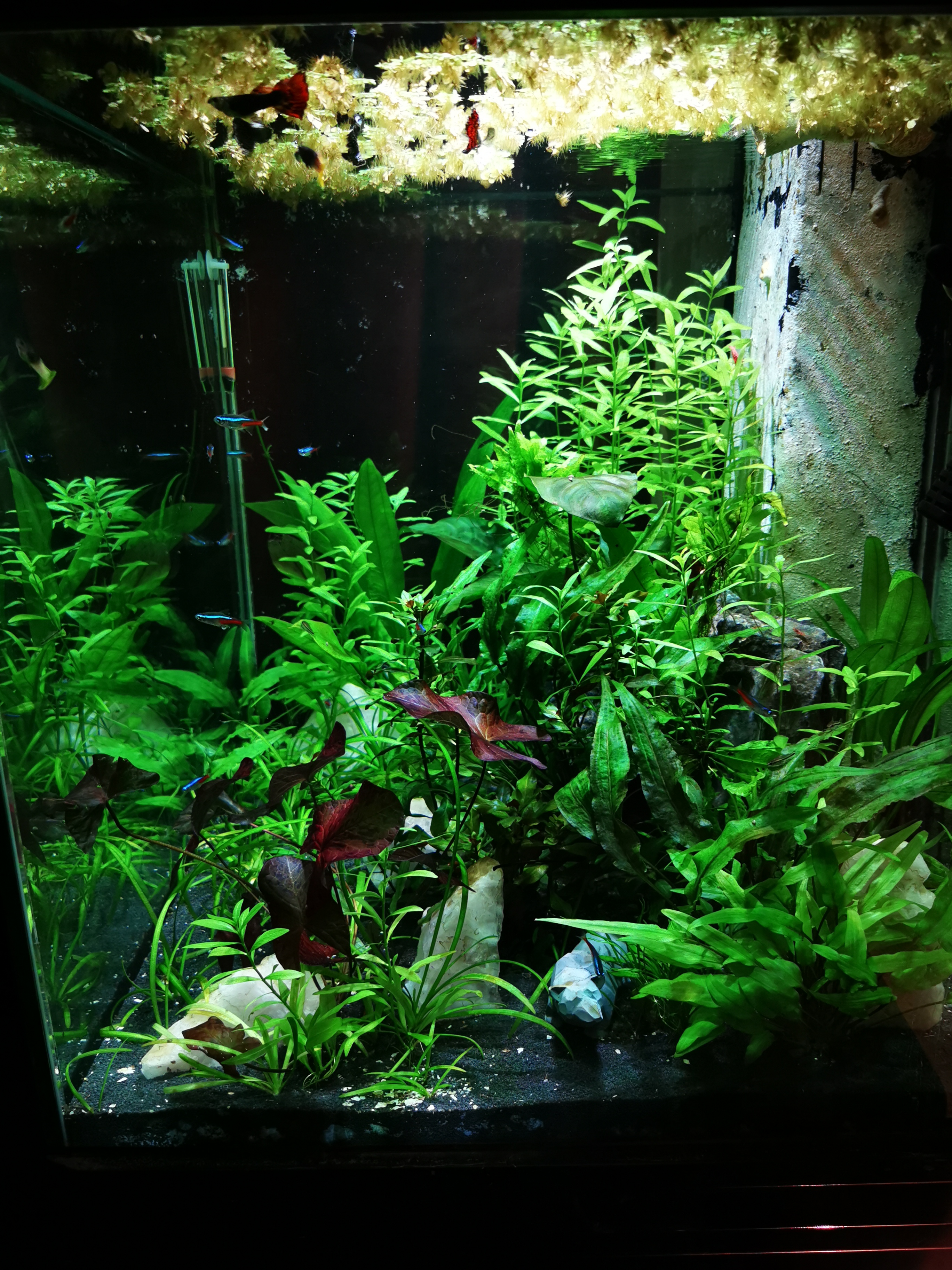 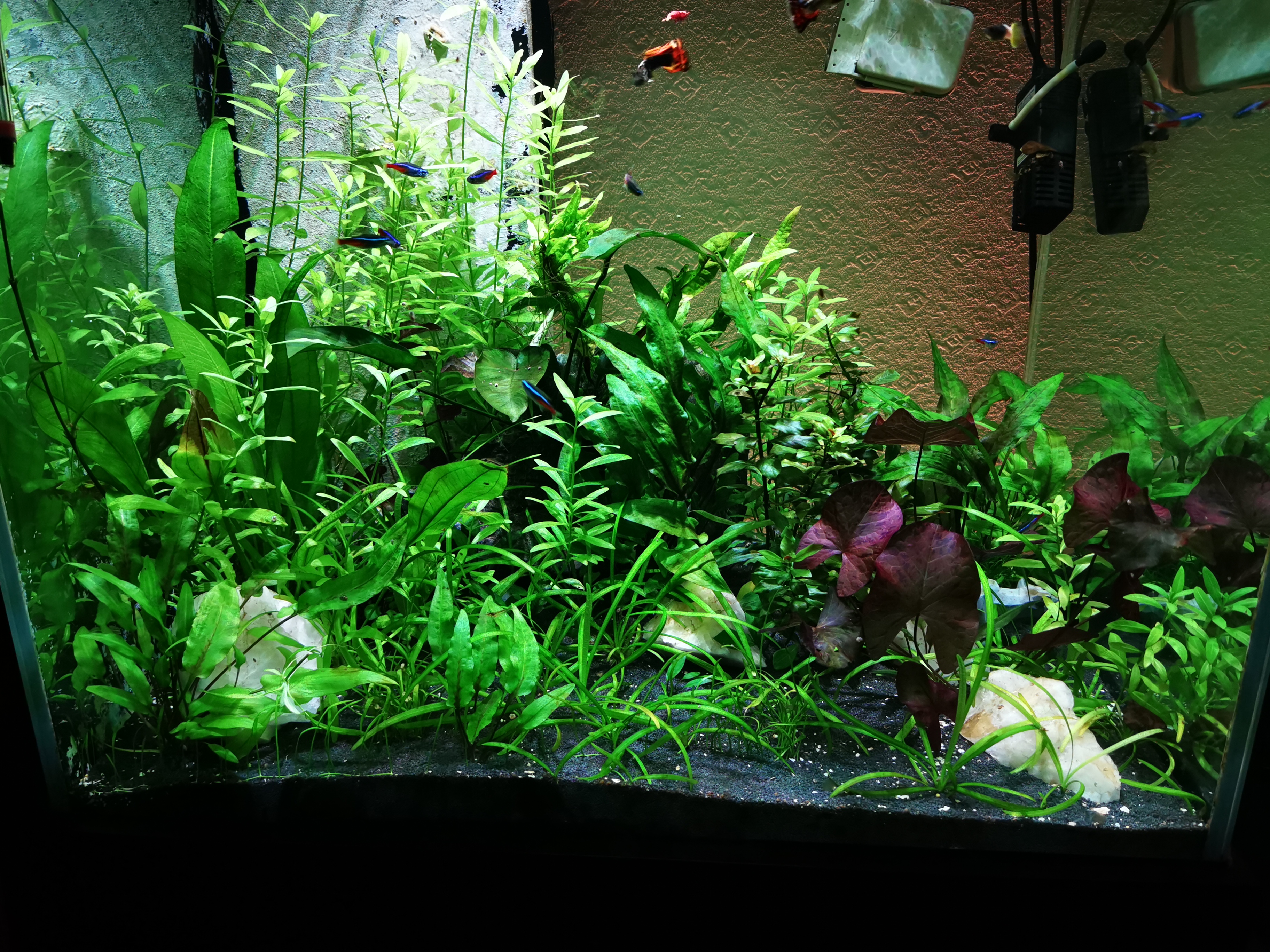 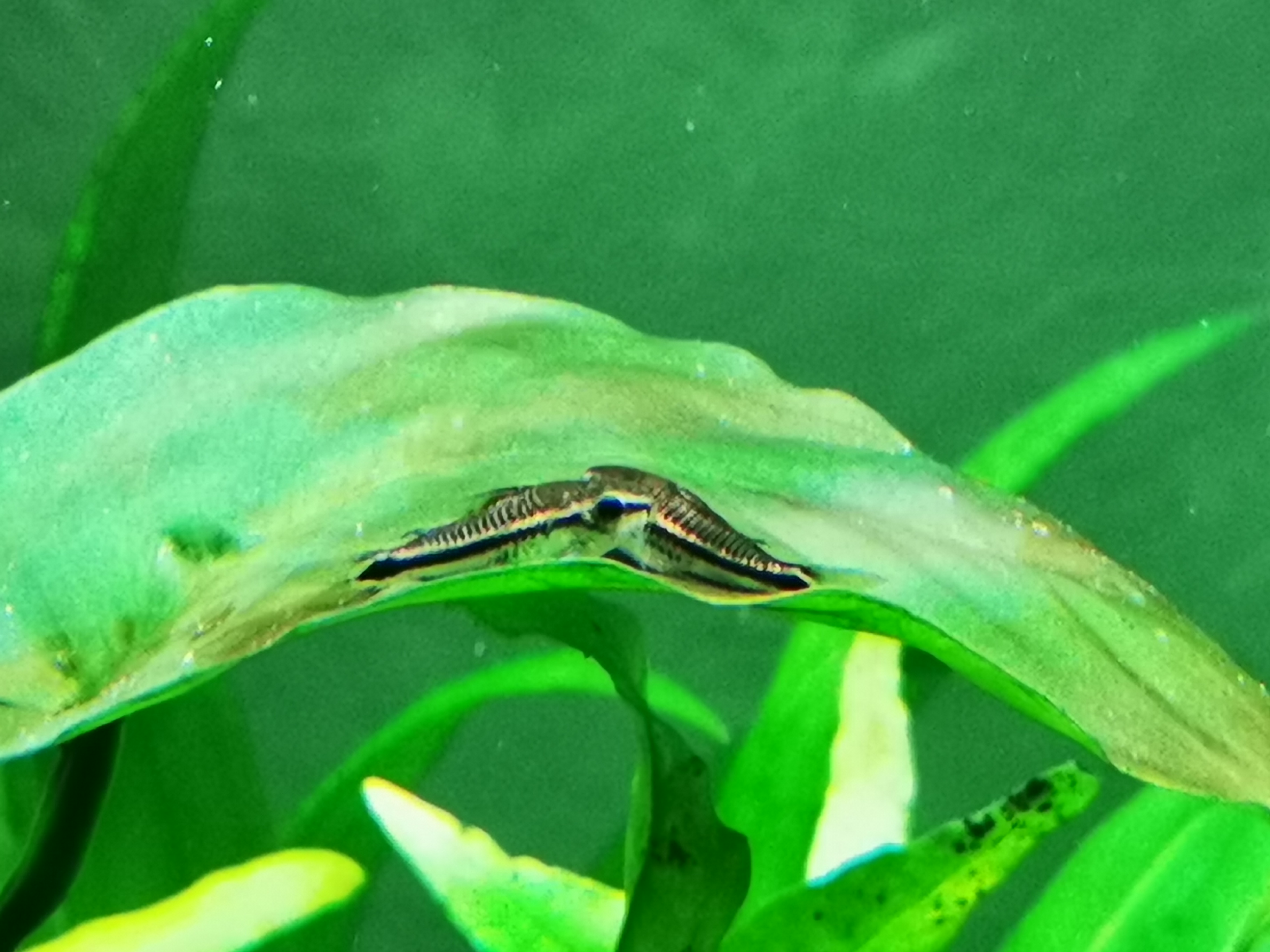 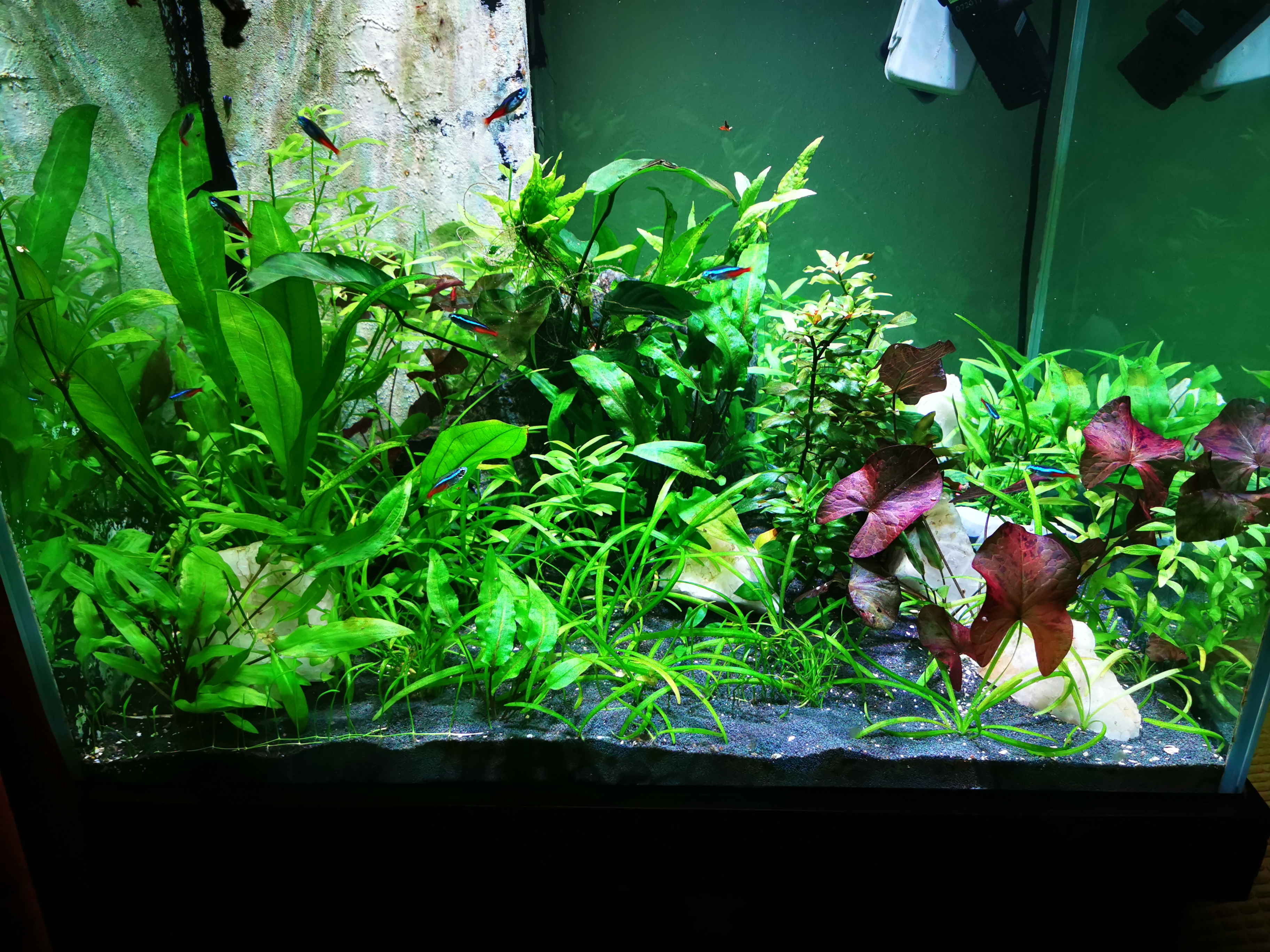 And the next lights on.


So last night after a water change, I'm almost asleep on the sofa, as walked in on the crown and clueless what's going on.
Loud bang and other half asks what's that, I have leap across the room and now directing the water from the sumps emergency overflow pipe into the sump, after the pipes comes away (maybe to many gym class on a slightly sprung floor)
They have dashed off to get a towels and I'm in hushed tones trying to get them to pull the plug and stop the flow, as I can't quite reach it. Apparently it never crossed their mind to kill the power, over welfare concerns. I point out there's a signify lightstrip and all the tank leads on the floor and maybe if happens again, ensuing the whole house's power is protected and especially the person with their arms trying to address the leak well and trying in harms way.

Still seem the crown was engaging enough to escape any stromg words and it also highlighted some stale air behind the curtain as a small patch of damp, where the things not moved in a while.
the ex marine sumped cube
N 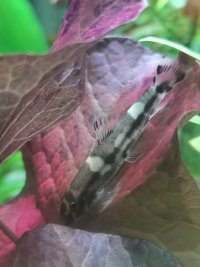