hi all
this is something i have been thinking about lately. it may sound strange but i hope you understand.

why do we use large rocks in nanos in comparison to the size of the tank? they look really good but have never seen anyone use the same thing scaled up. stuworrall has a great example of his latest nano. its awsome. but if anyone did the same thing in a 60cm cube would they think your crazy? another example is the ada gallery nanos. they have 2 or 3 rocks which fill the tank. and i love them

here you see the ada nanos

i have never seen this type of scape scaled up such as in a 60cm. why do we only use stones that go half the height of the aquarium in bigger tanks where as in a the photo the first one goes to the water surface.

can anyone understand what i am saying???
thanks
sam

trying to find a rock big enough would become a problem, Mark gave it a valiant effort in "prairy lands", they were some of the biggest rocks i have seen used.

Also, larger tanks are longer, rather than nano's which are typically square, so the ratio scaled up wouldnt work aswell either.

Weight becomes an issue too, lifting and placing safley in the tank would be a worry. Also, you buy a big tank because it has more water, i wouldnt want to be displacing that much water as you limit other options such as fish stocking, with nano's its a nano, you are probably going to keep shrimp or some fish that only grow to a few mm so it isnt as much of an issue.
Aaron North
My Flickr Account | Equipment needed for setting up an FE | Algae & Nutrients
J

The weight wont be an issue if you spread the load out a little with egg crate or polystyrene. I'd love to do a scape with a massive rock, but its a case of finding the right rock...

Granted, its not one stone, but it gives a good idea of the weight you can add if you add it correctly.

good thread sam, and a question i've thought of for some time.

it's true amano uses over sized stones in smaller aquariums, but i honestly dont know why. in his early works he never did it.

he also believes iwagumi truly belongs in a 60cm tank.

his nano's @ NAG hold some rather large stones indeed.


aaronnorth said:
they were some of the biggest rocks i have seen used.
Click to expand...

they were big for the size of tank, but to do it right i could of gone much bigger 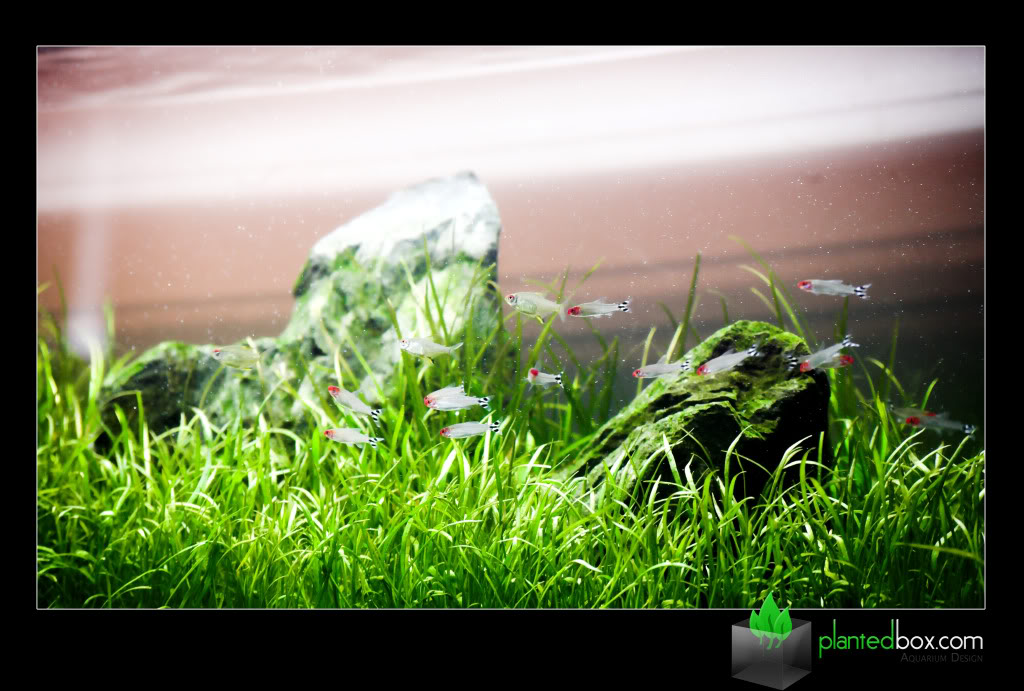 this was such a mare of a tank

thanks for the reply guys

i think after my next scape i am going to make it my mission so try this there is a place near me that does large rocks fairly cheap they are for garden and water feature use but i will deffinetly try. this is the place

Looking forward to it Sam

glad its not just me then

i would love to do a scape in my 60cm just using one large stone it would really be one of a kind.


saintly said:
in his early works he never did it.
Click to expand...

i think it may have something to do with our eyes and the way we see scale. Big rock in tiny tank seems to go but in a big tank it would just look too.. filled? I dont think its an easy thing to explain, its just something thats inbuilt

of course I may just be talking a load of tosh

i see what your saying mate

they are messing about a bit at the mo
thanks
sam

samc said:
i think ill give it a go one day and see if it works
Click to expand...


samc said:
no opti yet

they are messing about a bit at the mo
Click to expand...

this project is really getting to me now. well more the tank tbh. i just want a tank
thanks
sam

I've just seen an example of some large rocks used in a 55cm cube, and I have to say it looks absolutley amazing.
The scaper is Radek Baszak of Poland, he placed 61st with this scape at the IAPLC this year.
Click on link for photo.
http://www.aquatic-plants-studio.com/index_gallery.html

ahh yes i see that one today a couple of hours ago. his scapes are awsome and also very unique. nothing like it about
thanks
sam

I've just found this thread on the net, by accident.
I'll tell you the secret of it: the whole construction was not made-up using just one big rock- I used many large rocks (phyllite slate). To create massif normally I use silicon also in whole construction there are many more rocks that are not visible but they play main role propping up (supporting) main rocks from falling.
One thing, its quite stressful placing rock formation inside the tank, than observing it during first days after setup if something is sliding/falling .

i was woundering myself how you manage to construct it without it falling with it being so tall. do you have any pictures of the tank in the first stage with just the rocks as i would like to see how you do this

Thanks Sam,
I found some old photo, just a couple days after setup stage.
http://img22.imageshack.us/i/rockformation.jpg/
You can easily notice silicone on the right 'wing'. I usually start from gluing, let's say 3 large, main formations of arrangement I imagined, I do this always outside the tank (If it's needed I simulate the slope of gravel using table).Than I transport them into the tank.
I hope it will help a little.

I've never liked silicolning stuff together but I can see that with this kind of scape it's pretty vital! And that it realy can add an extra dimension. Great scapes, Not sure the angel fish suit them though.
Don't believe the hype.
R

Thanks guys for warm welcome.
Frankly, I don't like silicone too but there was no other way to do that. Simply putting one slate on other is too risky in long term.
Garuf,
Angel fish, imho, due to their shape they intensify dynamism in the composition. That was my intention.

thanks for the picture. i see now the gaps filled in alot then. i thought there would be alot of rocks in the gaps to fill it out
thanks
sam

http://www.ukaps.org/forum/viewtopic.php?f=35&t=9067&start=70
60cm NA aquarium
You must log in or register to reply here.
Similar threads