Where have all the hedgerows gone - 30 litre Opti-white

A bit of a break from my normal journals where I develop the ideas and plan an aquascape before showing setup pictures and then into the growth stages.

This scape was a birthday present to my Son 6 months ago for his 9th birthday. Basically it is just scraps of hardscape that I had on hand and plants/cuttings from other scapes that I have going. He is still at the watching stage at the moment and I do the maintenance but I was happy to oblige when he said he wanted a 'fish tank' and we can't just have a 'fish tank' in our house can we. It has to be an aquascape.

At the beginning I set the hardscape in and then laid Narrow fern on some flat Mopani pieces at the back, poked some Staurogyne Repens and Ammania Bonsoi in around the stones/wood and then laid Monte Carlo cuttings all over the empty substrate.

It went through a 6 week DSM period hidden in a cupboard before putting it in his bedroom on his birthday while he was at school.

The photoperiod is split so that it comes on at 7am and goes off at 9am so he can view it in the morning before school and it then comes on 3pm until 8pm in the evenings.

This is an ultra low maintenance setup. I don't do anything to it between fortnightly cleanings and that is just wiping glass and squeezing the filter sponges. I leave the central outcrop to gain some height over time.

The name derives from the first thought I had when I filled it up. It reminded me of those little patches in the middle of farmer's fields that used to be part of a hedgerow. 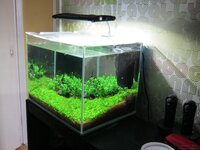 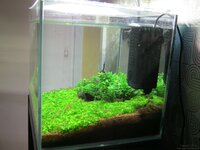 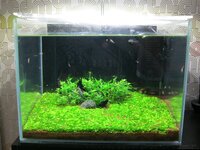 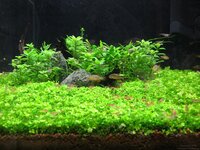 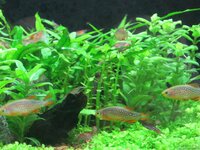 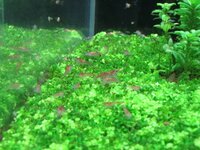 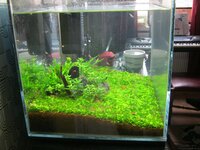 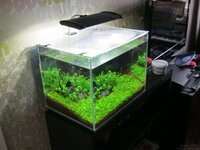 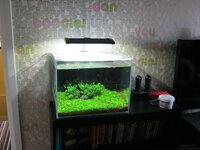 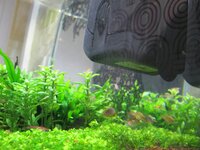 I can't see any pictures or the attachments

because the PITA attachment thing is messing me about. Not sure why. Having to try different stuff out but if its because of the photosize there is no way I am having seperate sized photos on my HD just for this forum.

Right should be able to see thumbnails now
A

but really need a dog picture to go with!

The scape is upstairs and the dog doesn't go upstairs however he did grace a few photos today: 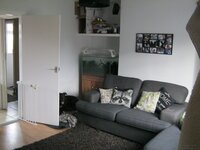 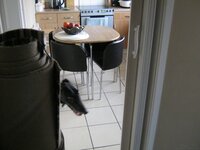 Bet the little fella was over the moon.

Kids are very easily pleased The same son ( I have 2 sons) was hugging me and saying thanks Dad last night too. What for? Thanks for doing the stairs Dad, the new carpet looks ace. He has spent every spare moment last night and is there as we speak sat on the stairs with his tablet. He is 9 after all and has a sheltered (in comparison to most of his peers) life. Not as innocent as I / we? were at that age but still enough to find simple things great. I don't think a wind up evil kenevil would satisfy at christmas put it that way. lol.

So yes he was over the moon, but it doesn't take too much. I love kids. Still trying to find something to get the same response from adult.......females

You got the wind up Evil Kenevil...I could only dream...
Nice scape...that name (where have all the hedgerows gone) is deeep man...what's the inspiration for it?

I always wanted the wind up Kenevil too!!

Troi said:
You got the wind up Evil Kenevil...I could only dream...
Nice scape...that name (where have all the hedgerows gone) is deeep man...what's the inspiration for it?
Click to expand...

I got the evil kenevil. hours and hours of fun. Kids today would do one wind and then 'meh,
what else did ya get me'. lol 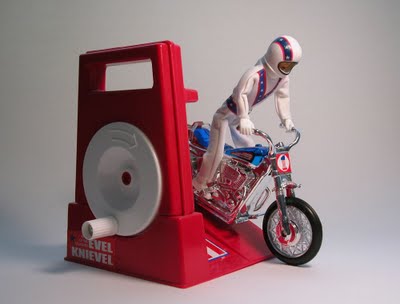 The name? I live in Lincolnshire. There are loads and loads of farmer's fields. All of them will have a patch or patches in them where there is either a tree or a bit of a bog or just rock where there is growth and they can't plough it etc. Would normally have been a section of an old hedgerow in the days where fields were smaller and before they cut all the hedgerows down.

I remember every year my Mum and Dad took me camping to a farm near Chester and that still had the smaller fields and loads of hedgerows.

So the name was just because when I flooded it, it reminded me of one of those patches where they have not been able to plough and a bit of the old hedgerow remains. Not really deep, just a quick 'ooh that reminds me of...'
Last edited: 21 Jan 2016

Grey hounds rock as does your scape

How did you manage to grow a scape for 6 months without your son knowing about it? Oh that in the cupboard? It's nothing. Just some vegies I'm growing.

Also, your son has a TV and a Playstation 3 in his bedroom and he's just 9?

flygja said:
How did you manage to grow a scape for 6 months without your son knowing about it? Oh that in the cupboard? It's nothing. Just some vegies I'm growing.

Also, your son has a TV and a Playstation 3 in his bedroom and he's just 9?
Click to expand...

It was hidden in the cupboard for 6 weeks. Been in his bedroom for the last 6 months. This scape has been running since May including DSM.

The TV was our old one. The speakers are temperamental and decide when they want to not work after they've been turned on for a while. The PS3 was a birthday present for him and his brother (who is 10) from an uncle so its a shared present. I had said not to buy it but my wife and her brother colluded on that with it being 'for the whole family' and it was initially downstairs. aargh. The PS3 'move' controllers are for my wife to do her fitness games. It is child protected and their time is limited on it. No internet access without password etc.
Last edited: 22 Jan 2016
You must log in or register to reply here.
Share:
Facebook Twitter Reddit Pinterest Tumblr WhatsApp Email Link