There have been several mentions of a future, big tank in some of my posts. My 70G tank was actually re-setup to be a proving/testing ground for learning to run a higher tech tank so this big tank would not start out as a huge disaster. Well, the time has finally arrived to start this project. I received a call today from the tank builder, Bow Valley Aquarium in Calgary, Alberta, Canada, that my tank has been built and will ship to me on Monday. All I can say is finally! The builder selection is a long story, and if you ever want my opinion please send me an email.

Although I haven't actually received the tank yet, I have a few things that I am going to post before the big arrival. I've got a drawing of the tank back that I supplied to the builder. 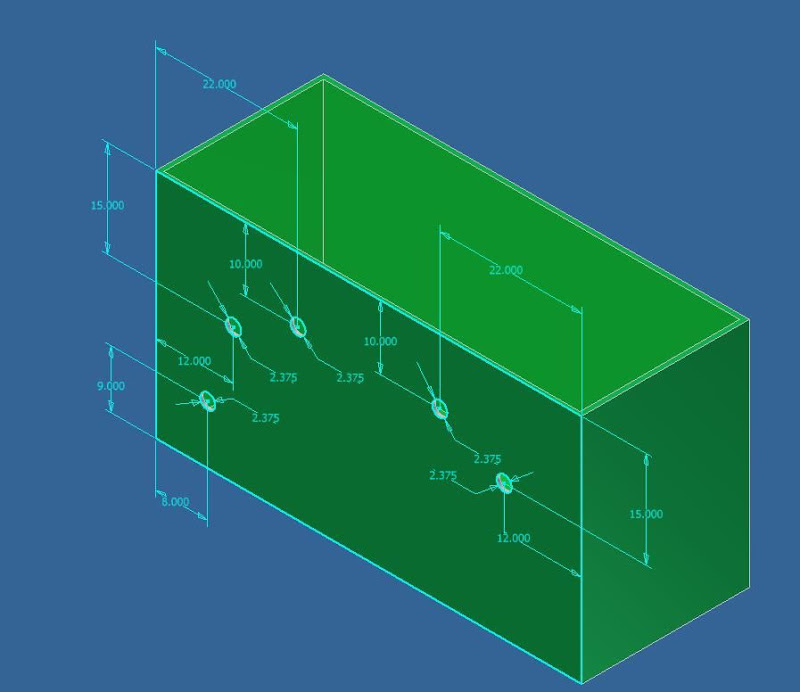 The overall tank dimensions are 66" long x 26" wide x 36" tall. The tank will be 3/4" Starphire glass on the front and sides with a rimless eurobracing design. Clear silicone will be used for the joints and the background will be a navy blue laminated sheet. As you can see the tank has been drilled with five 2 3/8" drilled holes for water flow. The top two holes are for water return to the tank and the bottom three will be for overflows. The plan is to plumb the tank for silence using a U style overflow and a DIY custom spray bar for the returns.

I have been finishing my basement for a while and this aquarium will eventually be the center piece. I have put in some hardware already that I will post prior to the tanks arrival. The process so far has been a few months, but I will compress this into 1 or 2 posts. Hopefully, by then, the tank will have arrived and the real action will begin. I'm going to build a custom stand for it. I'm hoping to finish up with a fully automated tank with a foolproof, fail-safe design. I'm sure there will be a few mishaps as things get worked out. Just hopefully none while I am asleep.

Anyone with any experience moving large glass tanks like this? I was thinking of calling a moving company to do it since I figure it will be over 500lbs.
Tank Journals @:
http://canaquaticgardens.wordpress.com
S

One of the things I am concious of with keeping tanks is the humidity they create. I have never experienced a tank as large as a 250G so I can only imagine the humidity it will create. I am trying to address this by exhausting the hood section of the tank out of the vicinity of the aquarium. Here I will have some photos and explanation of how I created an exhaust system in my unfinished basement that will allow me to exhaust the hot, humid tank air to 1) my furnace cold air return during the winter (improves heating efficiency and will help humidify the house during the super dry Canadian winters) or 2) outside using my dryer vent during the summer.

This system was put in months ago, before I started finishing my basement. To start, I had to put together the piece which will actually sit inside the hood and draw air. I am using a 120V 4" drive exhaust fan that was given to me as the first piece of hardware that will move air. I attached it to a 4" PVC elbow using some nails and construction adhesive. Once the adhesive dried, I wrapped it in duct tape to make the seal air tight. 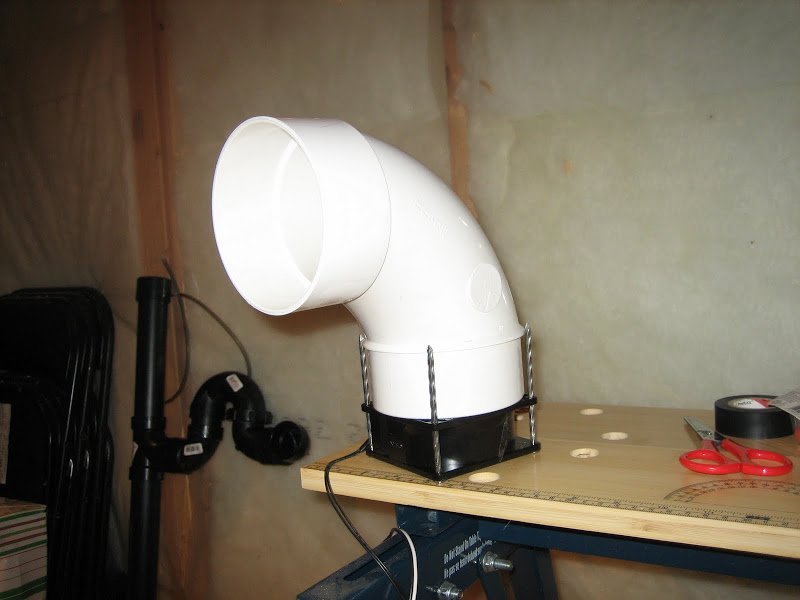 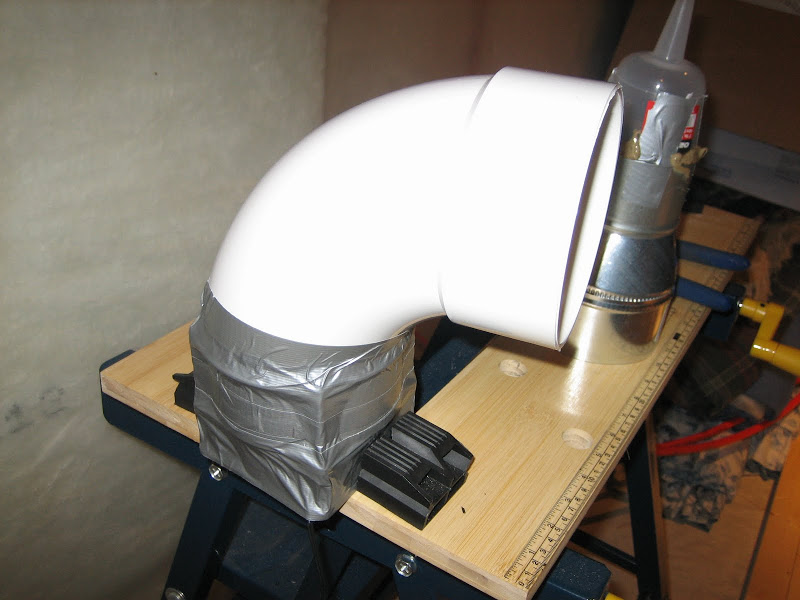 The next step was to mount the assembly to a floor joist and add an electrical junction to house the electrical connections for the exhaust fan and the flow boosting fan (to come). I drilled a couple holes into the PVC elbow and screwed it to a floor joist and mounted a standard light junction to the joist so that the junction was flush to the PVC elbow. This will give me access to the junction in the future since it will be below the ceiling drywall. 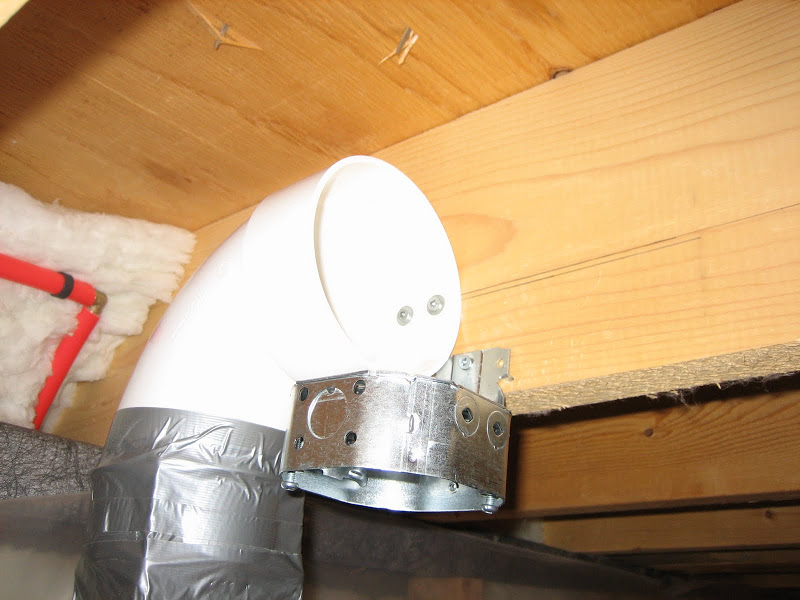 In all honesty, at this point I figured I just hook up some more PVC, and the drive exhaust fan would be able to overcome the head pressure and move the air from the one end of the system to the other. Boy was I wrong. I had no flow, so I had to figure out a good way to boost the pressure. Walking through Princess Auto I noticed furnace duct boosting fans. What do you know, they had a 120V 4" fan. Perfect! So I mounted the fan at the elbow and wired it up to a 120V electrical cord. In hindsight, I should've placed the boosting fan at a different spot but it works pretty well where it is. Attached to the boosting fan is length of 4" PVC that runs the length of the floor joist. 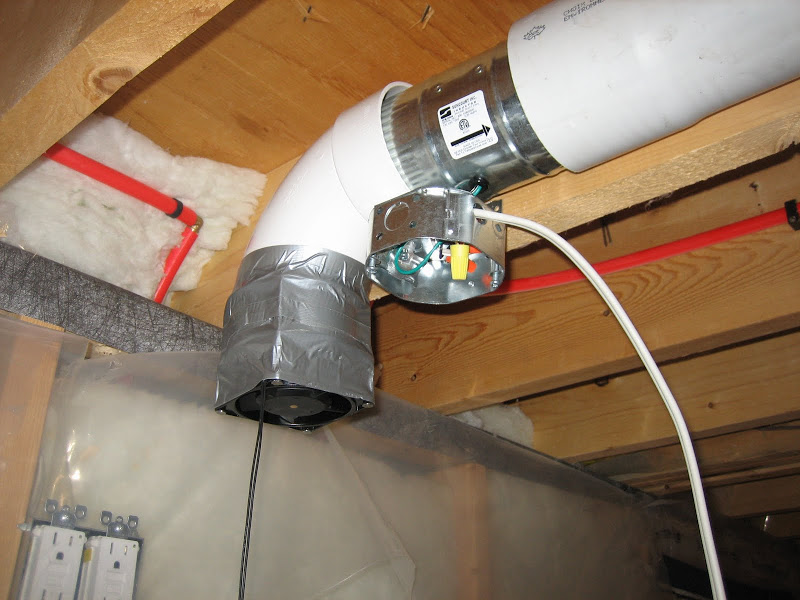 If you are wondering, yes that is 14-2 standard wire. It has since been replaced with 14-2 flexible outdoor wire. I used duct tape again to seal the PVC connections to the boosting fan. The long run of PVC was secured to the floor joist at each end the same way the PVC elbow was secured. The 4" PVC run took me to the tricky part of the project. I had to get the air from my future rec room, across the whole basement to where my furnace and dryer duct are. I had already boxed in my furnace duct work so I figured I could run a line next to the existing duct work without any problems. I used a modified funnel to taper the connection from the 4" PVC to a 1.5" flex hose that would carry the air the rest of the run. The braided flex hose creates a bit of an issue in terms of extra head pressure but I really didn't have much choice at this point. Here's the funnel adapter and it attached to the PVC with duct tape. 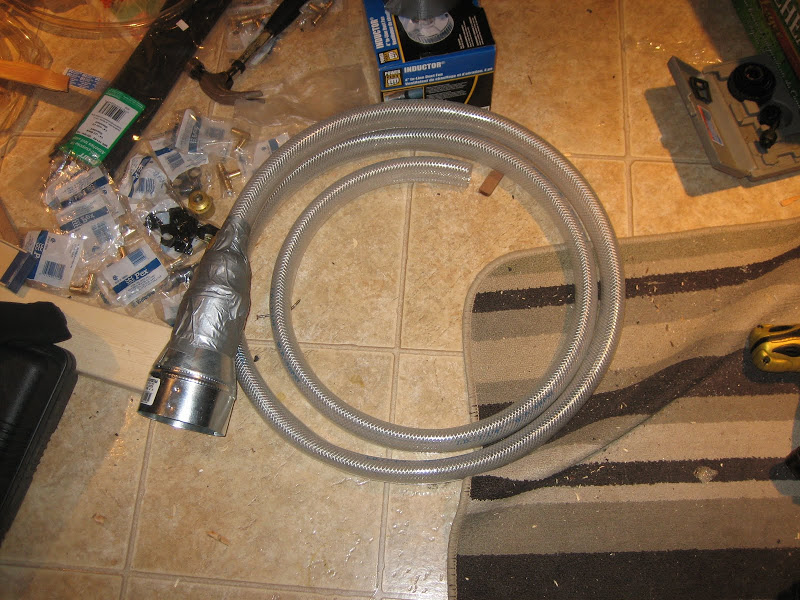 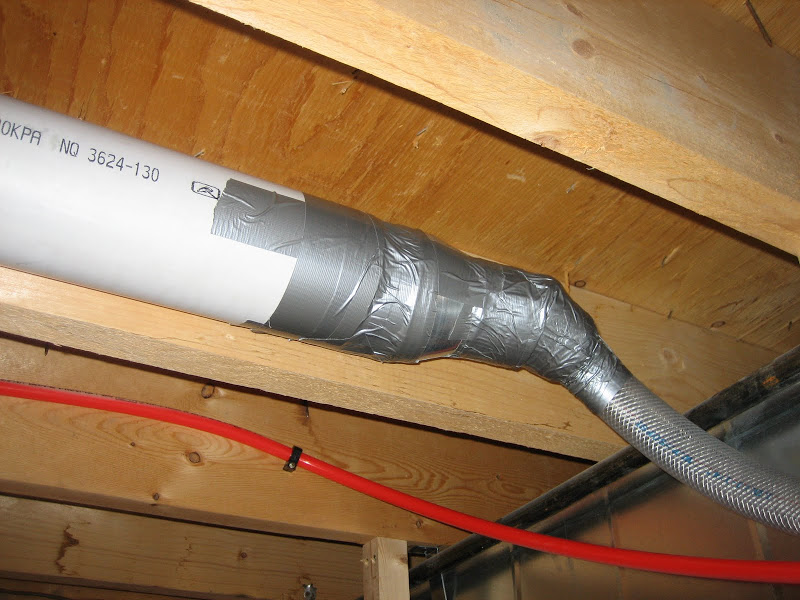 I don't have any photos of the termination of the whole system but there is a T connection with valving on each of the branches that allows me to run the air to my cold air return on my furnace during the winter or to my dryer duct during the summer. The whole system doesn't move a lot of air but enough that I think the humidity in the main room of the basement won't get out of control and it should help cool the lighting a little bit. It may have just been an interesting project and not particularly useful, but I figured with this setup I might as well go for everything I can think of rather than get the tank going and wish I had this or that.
Tank Journals @:
http://canaquaticgardens.wordpress.com

Looks like a great project - look forward to it developing

After almost 7 months of waiting for this tank, it has finally arrived. Not much to see yet since it is still in the crate but here it is. 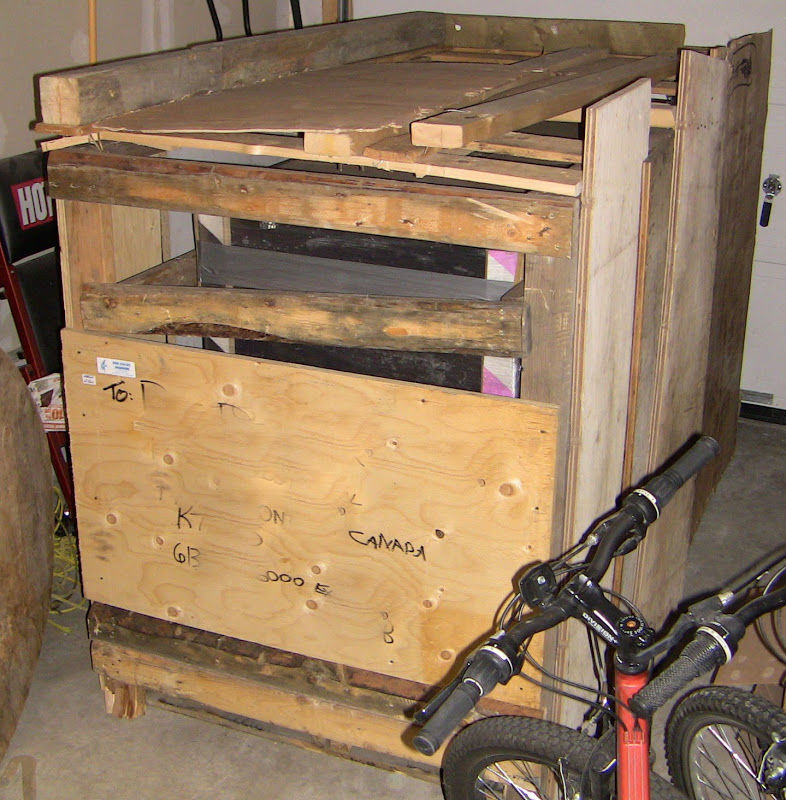 With most of the crate material removed. Man what a stressful job messing around with crowbars and prybars with a giant glass box inches away. 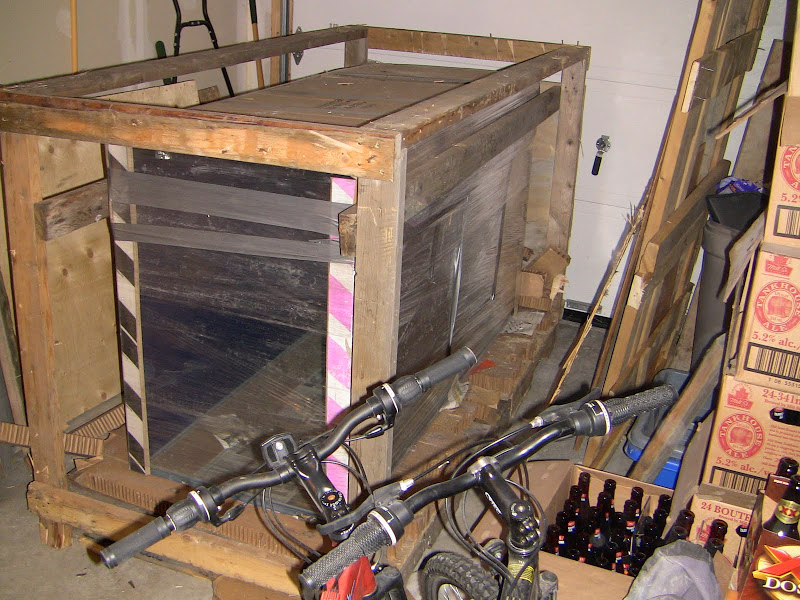 Here's a shot of it the builder sent me prior to shipping. It's looking pretty good. 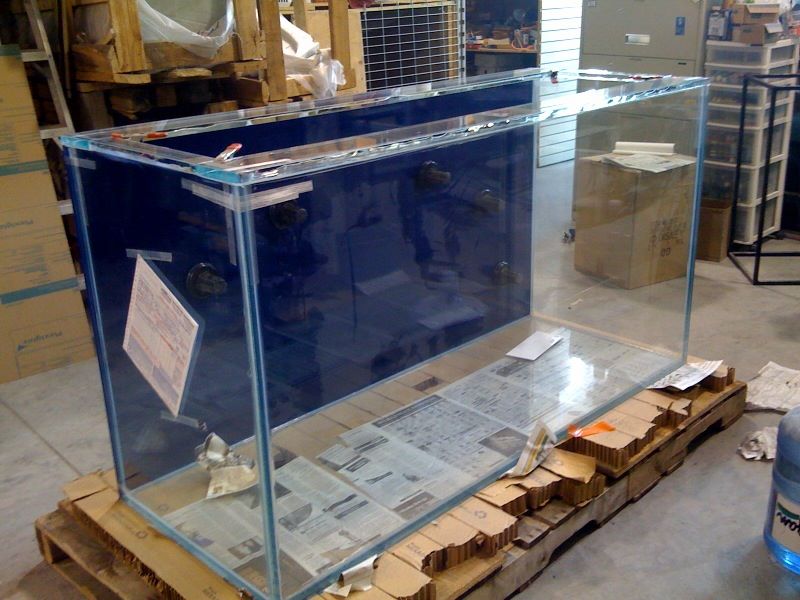 Thats a hell of a DIY porject!! Love it

Lol for a second I thought that the crate was your stand !!
T

Mortis said:
Lol for a second I thought that the crate was your stand !!
Click to expand...

I must admit I thought that to start with!

Finally the first update in nearly a year. This project has been on hold until I finished the basement that the tank was going to be installed in. I found out very quickly that having your first child will put a little damper on the projects you had going before. Nearly 1 year after the tank arrived it has been uncrated and is almost ready to be put on the stand. I'm thinking I will have to have professional movers do this job.

I've got the structural part of my stand built. It is 2x6 and 2x4 construction. 3/4" plywood on top. My wife is paranoid it isn't strong enough for a 250G but I think it's plenty safe.

Here's the stand going together:

The top frame that the plywood will be screwed to: 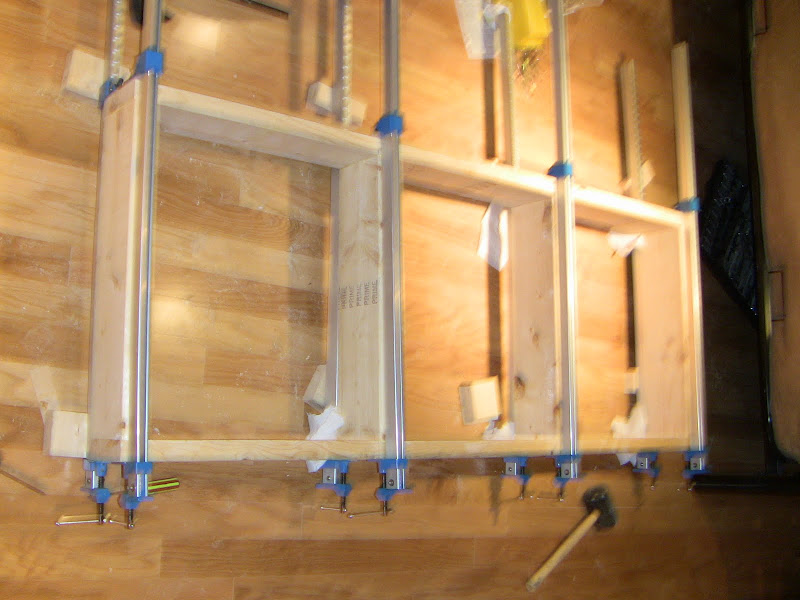 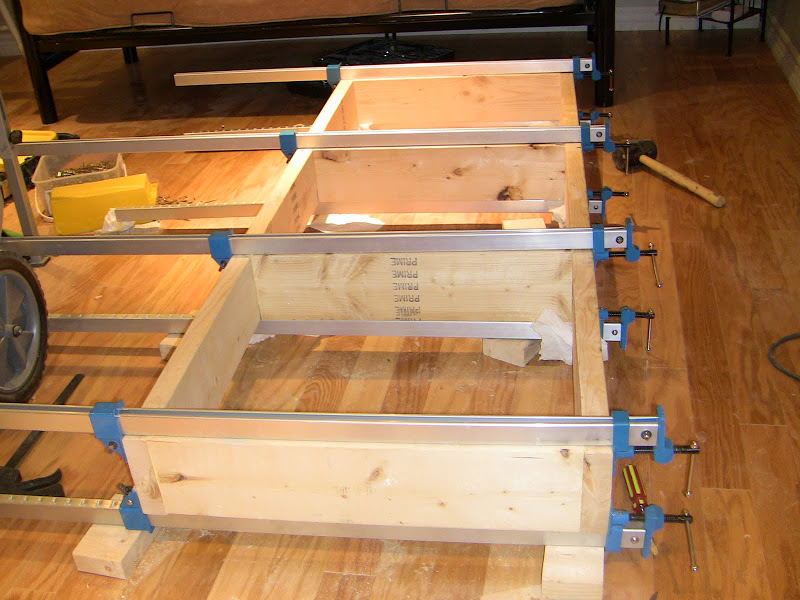 and the whole thing clamped together ready to be screwed. 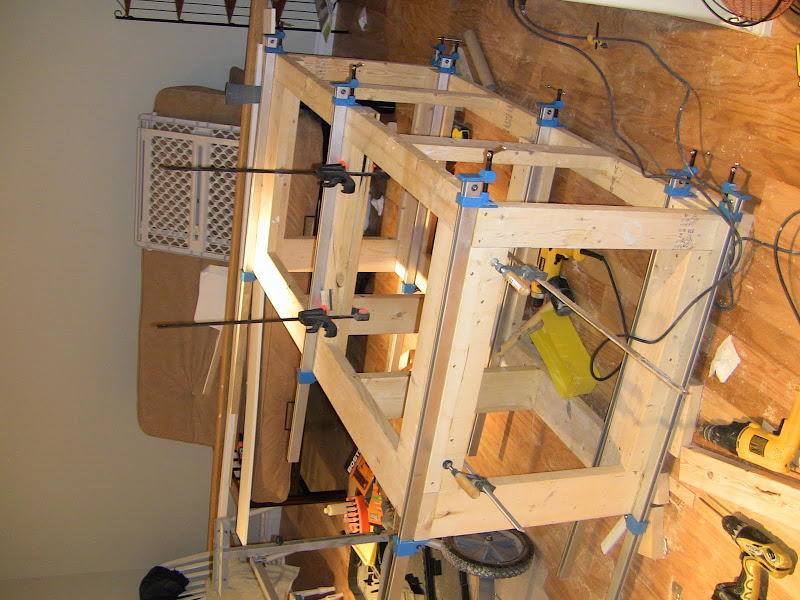 Looking for some feedback on the arrangement. I have lots more good branches that will beef up the right side a bit more so it isn't complete yet. 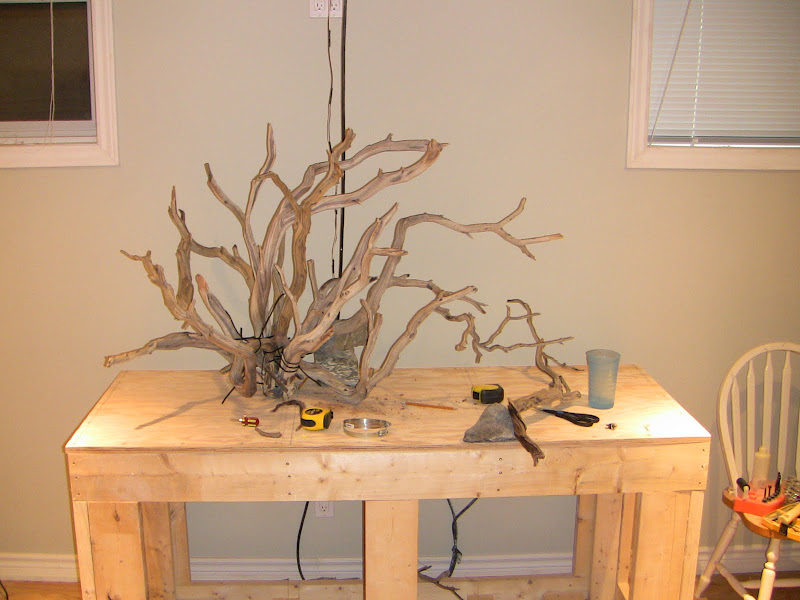 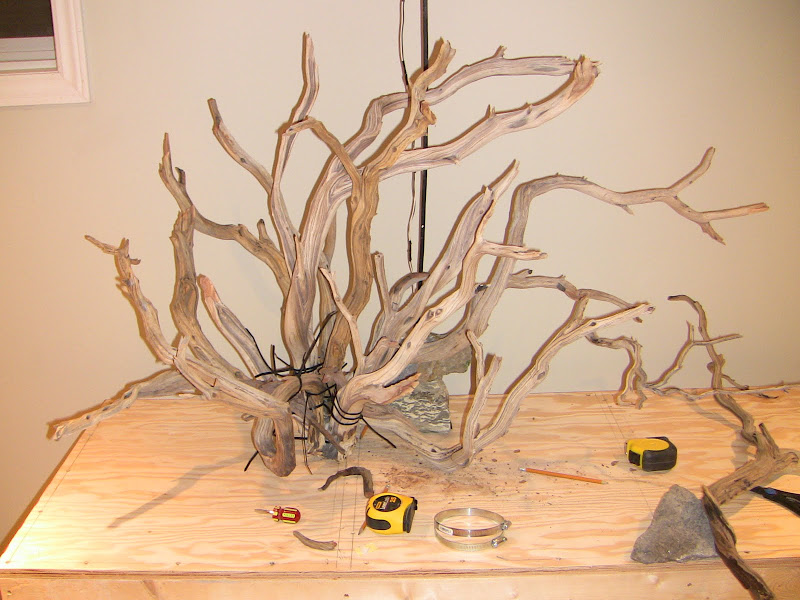 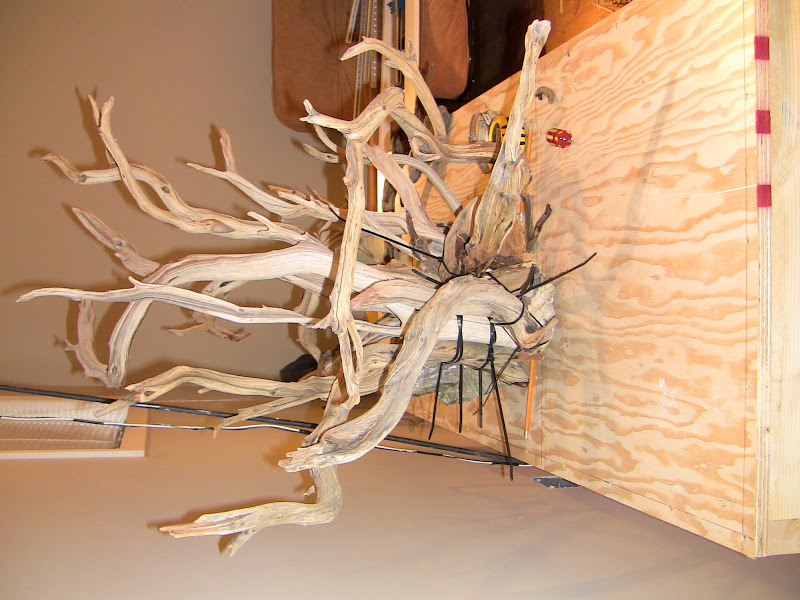 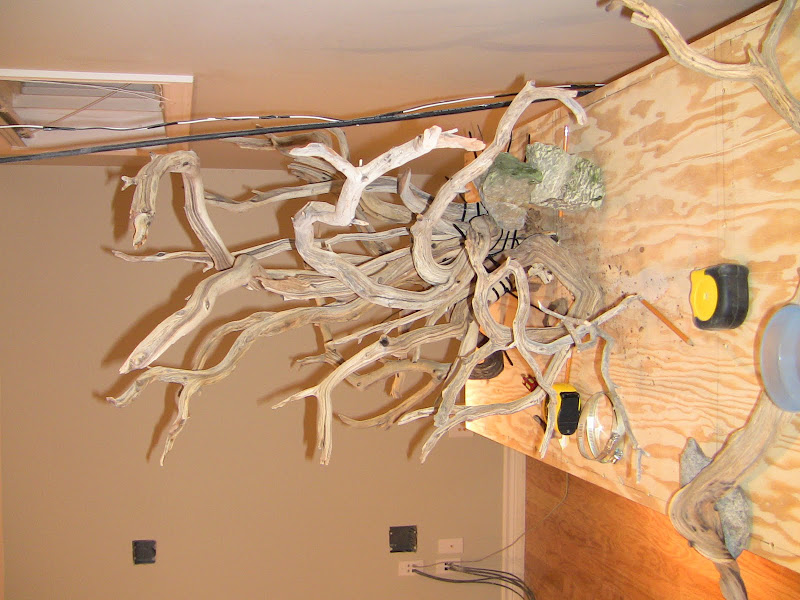 And still to be put into the arrangement: 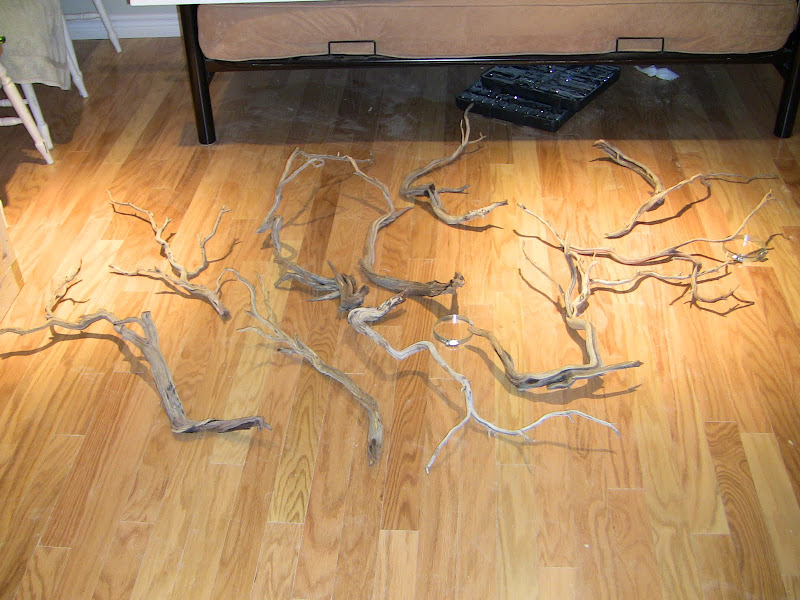 Here's what I think will be the final arrangement. I got every piece in, including a couple small pieces I had in an old tank. 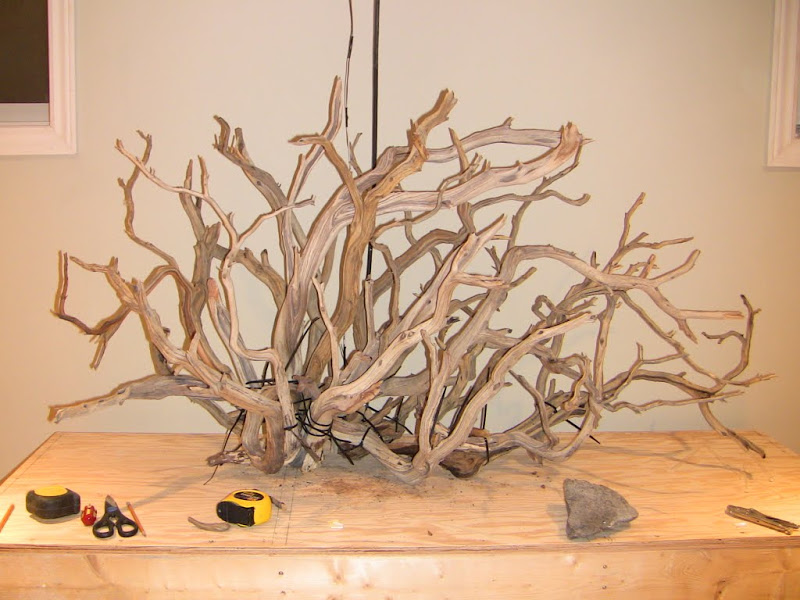 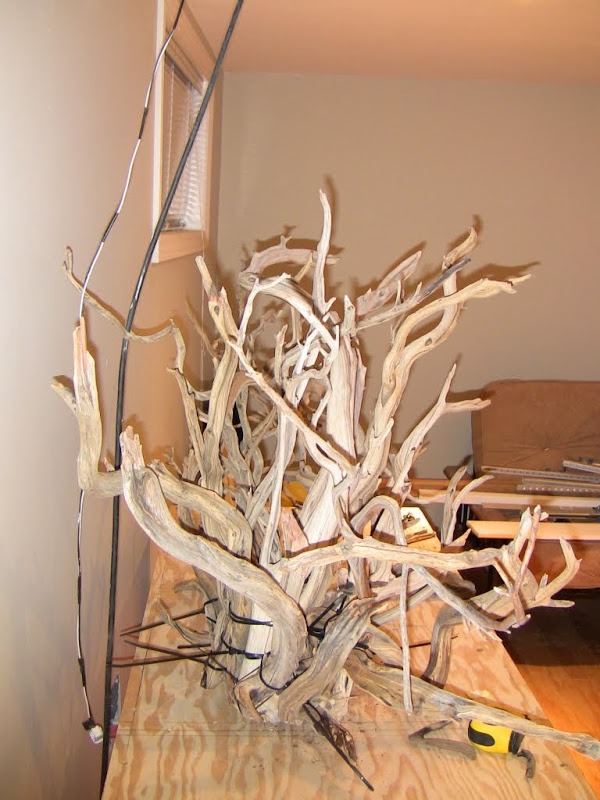 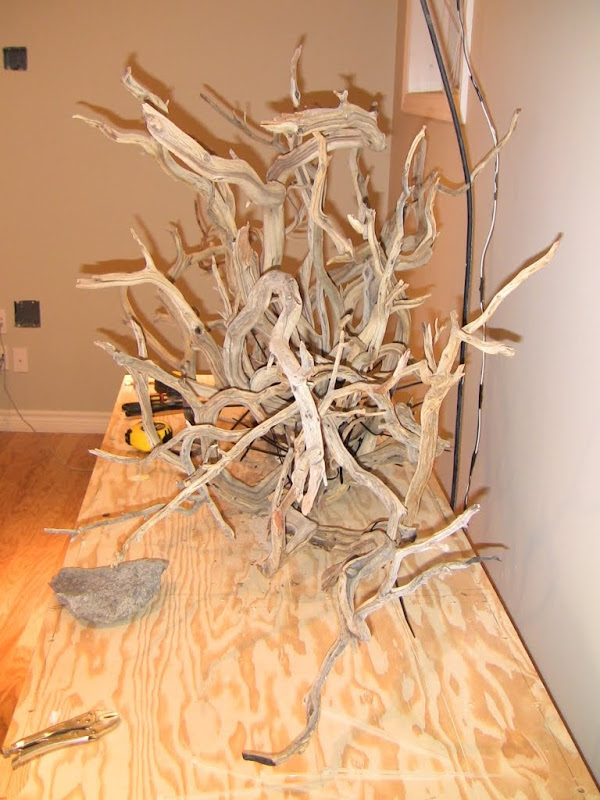 What do you think?
Tank Journals @:
http://canaquaticgardens.wordpress.com
K

I love the wood and it looks great!

by the way where did you get that wood from? If you dont mind.
C

I got the wood from someone on another forum. I think he is based in Arizona? I believe he sells packages of wood all the time. I could look for his contact info if you need it.
Tank Journals @:
http://canaquaticgardens.wordpress.com

Consigliere said:
I got the wood from someone on another forum. I think he is based in Arizona? I believe he sells packages of wood all the time. I could look for his contact info if you need it.
Click to expand...

Here's a link to my blog that has the screen name of the guy I got the wood from.

I found him on the Aquatic Plant Central forum or Planet Tank.net forum as one of the two names in that post.
Tank Journals @:
http://canaquaticgardens.wordpress.com
X

looking good, nice tank, what type of filtration are you going to use? co2? lights?

I got a 75gal planted, though I was into big stuff but... you went overboard

Im going to use a 70G tank for the filter. It will be a DIY sump style. There will be a pressurized CO2 system with a reactor and water column dosing for ferts. I have 6 T5HO lights with Geismann day and flora bulbs.
Tank Journals @:
http://canaquaticgardens.wordpress.com
You must log in or register to reply here.
Similar threads