Hi, this is going to be a loooooooooong planning...
Some of you have seen my recent topic about bottom drilled tanks. Originally i wanted to go for 370L bottom drilled but decided that its a little to big and i dont have enough experience to pull it out yet and that its better to go for something smaller and later to get something about 200G Another point was that aiming for 370 i would have to go for 12mm glass witch is almost 2 times more expensive.
To some up all that i have today ordered 270l 120X45X50cm (48x18x20inch)where 50 is the width optiwhite tank from aquariums ltd. Expected delivery is the middle of april (10 weeks)

Equipment:
Filtration: I have JBL 1500e and should shortly receive an eheim 2076proE witch will give me around 3200lph and should be enough as i dont want to add powerheads due to intention to keep visible equipment inside the tank to a minimum. I will have koralia 1 ready as a backup though. So filtration is pretty much sorted.
2 sets of lily pipes from ebay. The first set is on its way, i will check the quality and if its good will order the same second set.
CO2: 2Kg Fe with cheap wave regulator with solenoid. Have not decided yet about the diffusion. Will probably just let it run through jbl or if some spare money will occur aquamedic reactor would be an option to consider or DIY route. Later might add bigger co2 canister as well.
Lighting: Thinking about a slim Arcadia OT2 4x54w T5 at the moment but most likely will go for a used one with the same type of bulbs. If anyone has one and willing to sell give me a shout...
Heater Hydor external 300w

Substrate:
No money for a fancy one unfortunately...

Some experimentation will be going on here...
The bottom layer will consist of akadama mixed with worm castings, some peat moss and some osmocote. Will probably mix some Ferropol for extra iron.
Might add some of this:
http://cgi.ebay.co.uk/ws/eBayISAPI.dll?ViewItem&item=170400826912&ssPageName=STRK:MEWAX:IT
That should be the closest alternative to Powersand
Top layer will be akadama. As you know that was used by Amano himself in the early days...
Sandy foreground is something i am thinking about as well...

Hardscape:
The first scape will be Iwagumi. Thinking about ohko a.k.a dragon stone. Not sure about the amount needed. Want to have quite lots of hardscape. Need your advice here. At the moment 30kg is considered. If anyone has any to sell you are welcome

Plants:
Hmmm... Originallly wanted to go for eleocharis parvula as a main plant but having difficulty to source it these days. Mayby will stick to glosso which i have loads and wont need to spend money on.
Echinodorus tennelus will be there definitely for the same reason...
Not sure if i leave it 2 species or add a third one, have not decided yet, maybe eleocharis vivipara at the back.
Fauna A big school of small fish Plus ottos and shrimps (amanos and cherries). Have not decided yet, will see what lfses have to offer when everything is ready.

The title is provisional could be that it was used before.
Thats it for now.
All comments and advice are more than welcome.

Had a look now on aquamedic reactor and it seems that it has 12mm hose connectors so probably will DIY.
Anyone knows if i can use acrilyc clear pipe? Will the pvc cement hold it? Found some on ebay where you can buy 50cm or 1m
Forgot to add that cabinet will be ADA style made by my friend carpenter.
To many to count...
J

This sounds like it is going to be a mega set up, looking forward to seeing it develop.

Do you have a link for the eBay lily pipes as I am on the look out for some myself.

http://cgi.ebay.co.uk/ws/eBayISAPI.dll?ViewItem&item=160391102143&ssPageName=STRK:MEWNX:IT
I think this is the latest copy of ADAs where intake holes are distributed evenly rather than only at the end.
Have bought from this seller before different items though. Quite good service i must say. Hope best for the quality of these...
P.S. Have received them today (surprisingly fast, 8 days since placing an order) quite happy with the quality have not seen any branded though. One sucker holder has a slightly wrong shape but i was able to put the sucker on. Everything else looks fine.
To many to count...

Heh, at least i didnt lie when i told this was going to be a looooooooooong planning stage
Starting to introduce fauna slowly.
So, dimensions changed to 120x55x45 (55 wide)
Will write the whole story later today, and for now enjoy some pictures: 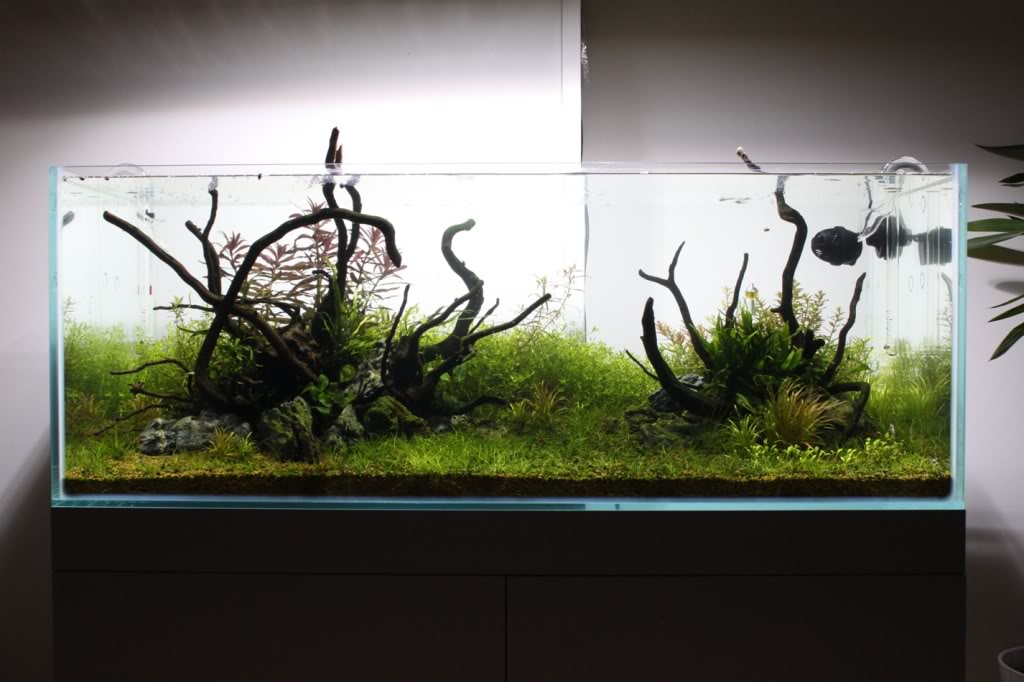 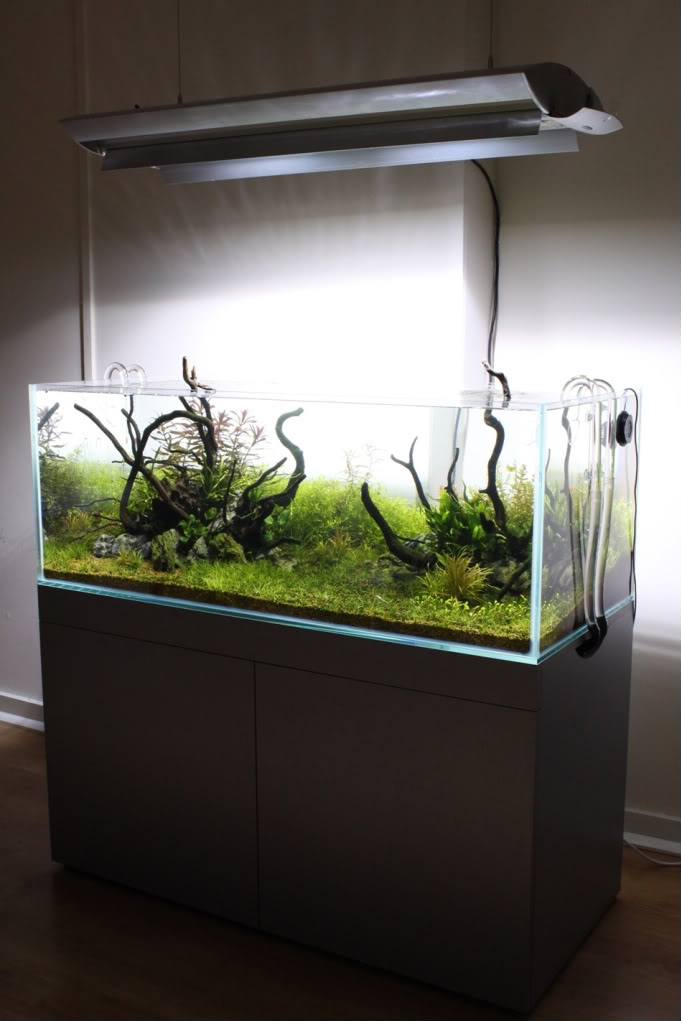 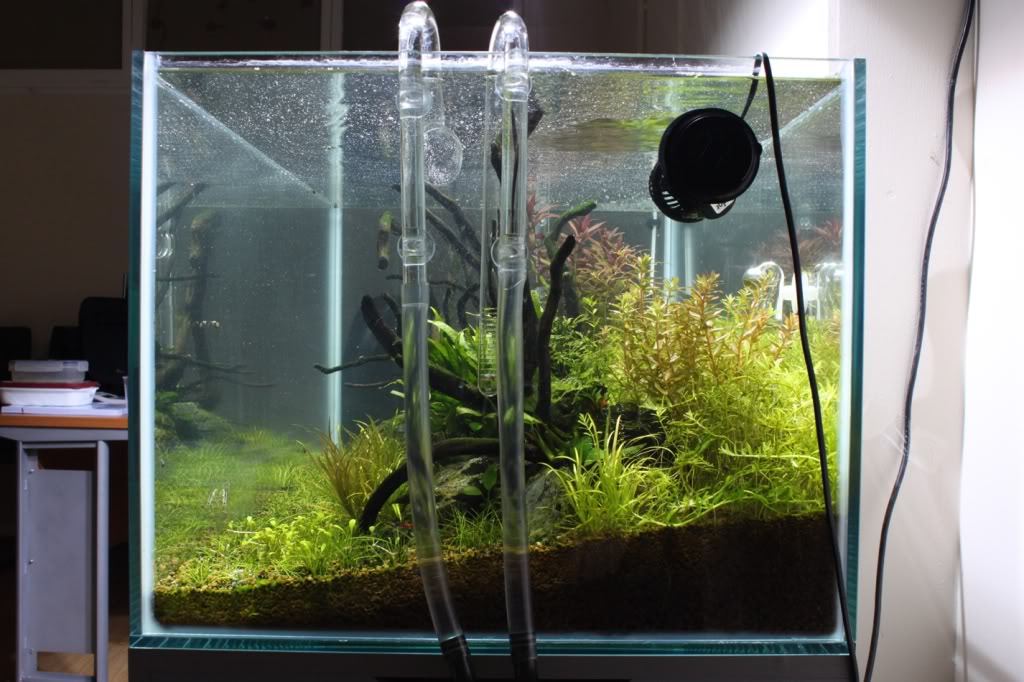 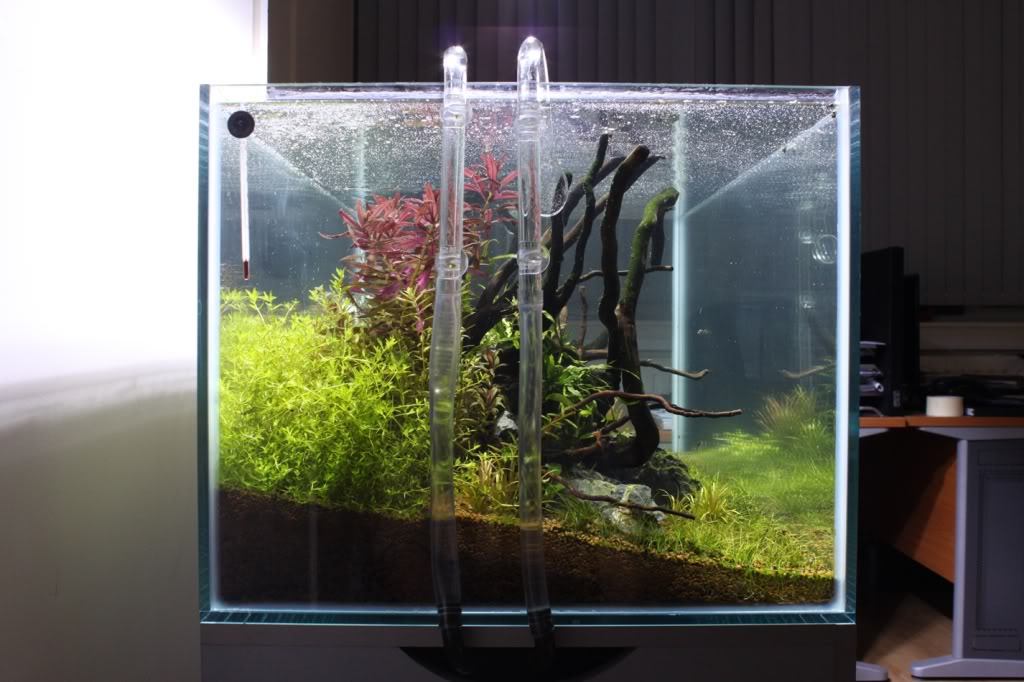 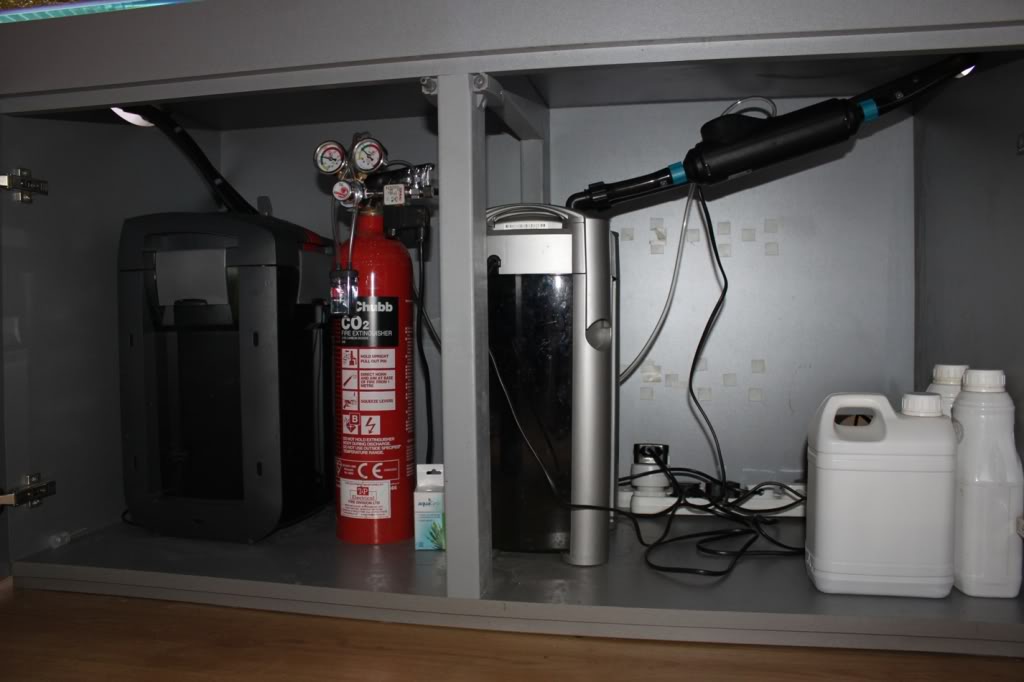 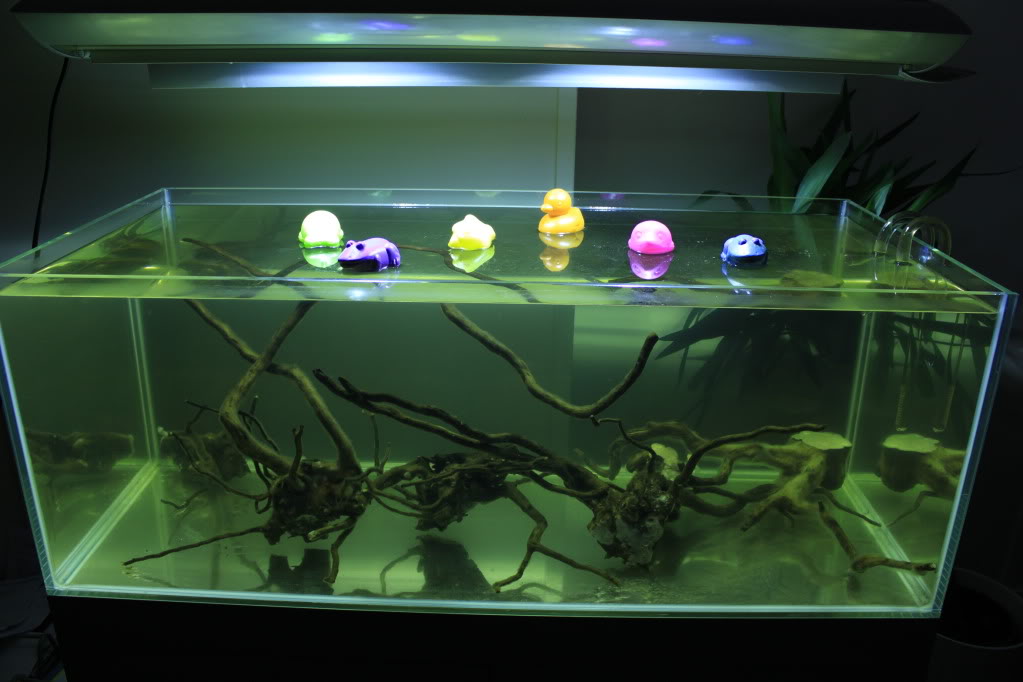 what light is that ?.
Neil

Thanks Neil. Well, its running for 2 month but i had co2 to run out twice while me away on holidays

Its a pity i didnt take any photos when i came back.

Now would really appreciate an advice choosing fish.
There will be 2 main fish something bigger around 15 fish and something smaller around 40.
Both would be tetra species.
Considered angels as they would look stunning for people in the office to look at but for several reasons changed my mind the most important being high flow, the other 2:
1)tank is not high and big enough for grownup angels to look in place in final photos. (could be taken out for final photo session though)
2)cherry shrimps (could just use amanos)

So the bigger fish will be Bleeding heart tetras as i have an lfs nearby selling them 5 for 10Â£
Smaller fish will probably be cardinal tetras (your opinions please how these 2 would look together?)
Second fish choice remains open. (black neons, rummynose, silvertip?)
The second picture is what i see from my worktable

That is looking wonderful! I love it when a great 'scape just pops onto UKAPS almost out of the blue!!

The aquascape is excellent and the photography is top notch too.

Congratulations. I look forward to the "whole story"!

Bleeding hearts, cardinals and black neons would be a nice mix mate.
www.georgefarmerstudios.com

Thanks George. Its very useful to receive a comment from top scapers Mmm, was a bit in doubt to use 3 species but i really like how black bleeding and cardinals sound. And black neons could be a good transition between cardinals and bleeding hearts.
But being all tetra species i see them working together.
To many to count...

the first pic, if you go by the wall at the back dividing the tank, effectively gives you 2 scapes.


Piece-of-fish said:
Thanks George. Its very useful to receive a comment from top scapers Mmm, was a bit in doubt to use 3 species but i really like how black bleeding and cardinals sound. And black neons could be a good transition between cardinals and bleeding hearts.
But being all tetra species i see them working together.
Click to expand...

Fish selection is a very personal matter and it's good to take into account who else views the tank.

Because the tank is big, and the layout complex enough, you can use three species to good effect. Tetras are a good choice in my view. They're relatively peaceful in their swimming behaviour, which is another important consideration when selecting fish.

Keep up the good work!

Thanks Sanj and Mark... Good notice about the wall divider.
If i'd given a chance to my colleagues they put something as big as arowana in there

'
Its so hard to explain that its art 8)
By the way. The left straight branch pointing to the left top corner is a bit distracting to me, it just carries your eyesight away from the scape. I might cut it shorter in the future. It didnt work before in 1 hardscape version (pics later, there were 3 islands initially) and it doesnt work here.
To many to count...

Looking great, you really pulled off this one! When are you hosting the LFKC meet?? hehehe

Thanks Londoners 8) As soon as the tank will be in good shape i will invite LFKC and anyone who wants to join.
The tank is actually not in the best shape, there is quite a lot of gda and some diatoms but thats temporary i hope.
Well the GDA on glass is actually giving me a lots of pain in both my high tech tanks atm. This oe i have to clean the glass 2 time per week together with the water changes. I've read that leaving it for some time and scrubbing when it starts to fall off could help with siphoning but i havent noticed any improvement on my smaller tank and doing it in the office just wont work. So maintenance is rather really high atm.

Sorry forgot to tell about the lights.
Specs to follow...

Got almost all plants from my home 180l which was then converted to low tech.
Tank arrived at the end of May due to cold winter (ordered in February)
Initial plan was to get a mountain scape with Dragon stones but could not source any good amount so went for redmoor.
Got redmoor from lfs for a good price. The first time they had it and i just wiped it all the moment i saw it

That is the first time i am using MH lights (should have tried them with a small tank first silly me)
Planted and filled around the middle of August.
Due to me being lazy and stupid i only started to fertilize and co2 dosing after 6 days which i found out with 300w of halides suspended just 10 inches from the water level was a no no (they are about 22-24 inches off the level now). That was a first major mistake. Did 50% water changes every second day which probably saved me from major algae. Then hit the diatoms.

Initially a have used pub co2 bottles which i got from a friend of mine. Well, they were not as full as i have thought

The glosso said it had enough as well as MU and ludwigia arcuata, all the rest plants were managed to be saved. However some glosso recovered in the right side corner and now is starting to thrive. It will be removed to emmersed setup in few days.

During this time lights were on for around 6,5 hours and water changes done 2-3 times per week.

Raised the lights.
Connected FE and from now things are getting better.
Around 3 weeks ago ordered and planted some aromatica, rotala wallichii, ludwigia arcuata and acicularis from Planted tanks (very cheap and great quality plants).
Couldnt grow wallichii though.

2 weeks ago received and planted loads of parvula from Jurij instead of glosso which i am happy now because its less maintenance and suits the scape better.
Replanted rotala green and ratundifolia which were left to recover after these disasters.
Planted loads of Micraithemoides taken form my home setup.
All stem plants are subject to changes.

1 week ago converted 3 islands into 2.
Yesterday turned co2 down and started to introduce fauna as the guys have had enough of fishless tank.
Going back to Shreks swamp stage (dosed between 100-200ml of liquid carbon for 3 days)
Still performing water changes 2-3 times per week.
Arcuata will be replanted closer to aromatica when stems get stronger.

So thats the story.
And a bit more pictures of initial hardscape and planting...

3 Islands might have worked at the end as gave a good feeling of depth but was too lazy to wait.

3 Islands might have worked at the end as gave a good feeling of depth but was too lazy to wait. 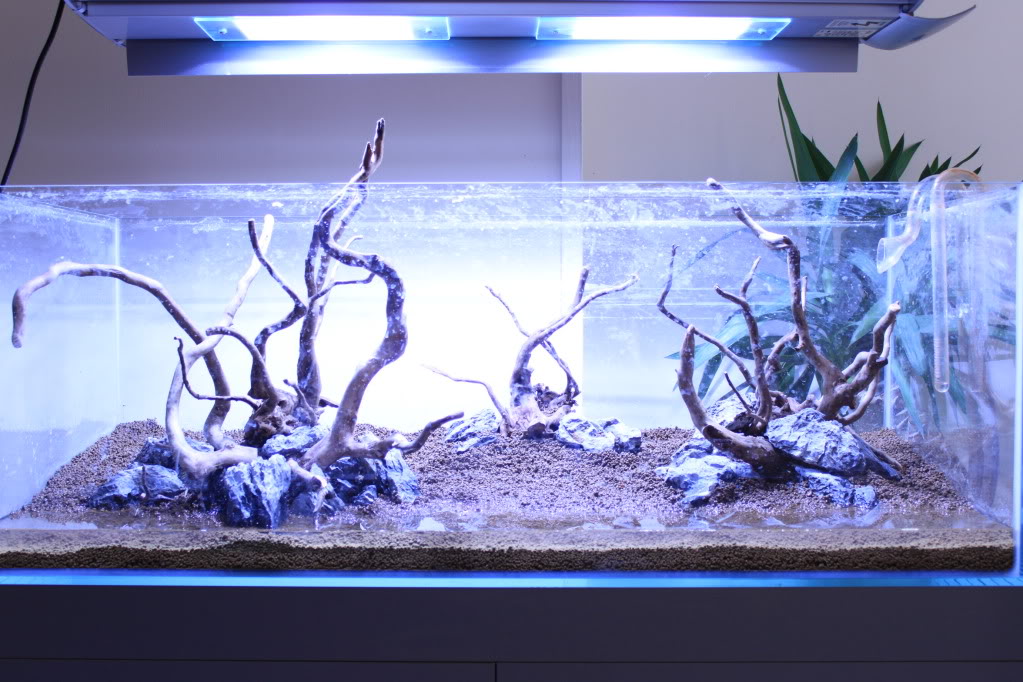 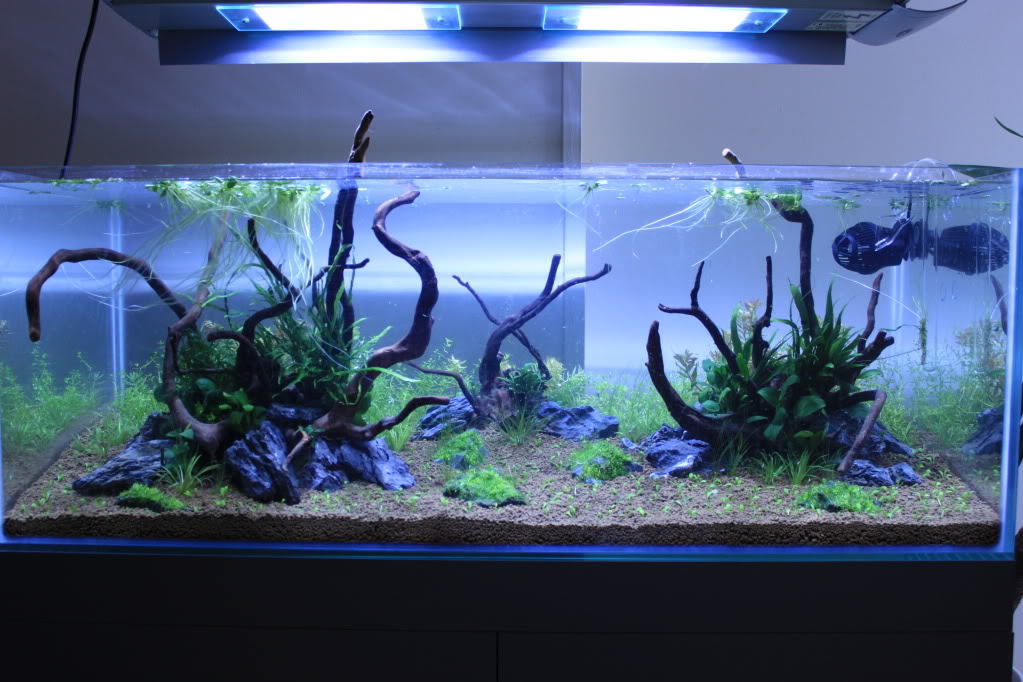 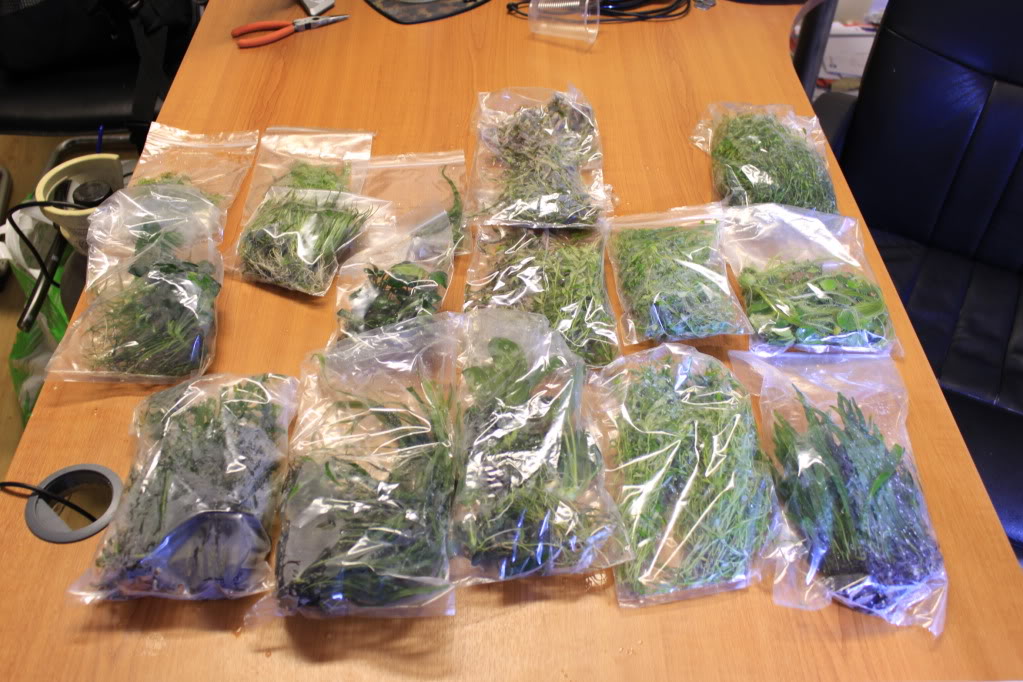