Hi Mark is the addition of liquid carbon the correct thing to do. Do you think my brown mosses are dead? Any advise would be appreciated, thank you. Really interested in EI dosing too.

I'm only speaking from my experience here but I had some brown weeping moss attached to a bit of wood tat I never got round to taking out.. 6-7 weeks later or started growing and now is in full spread and very healthy! Miracle really lol

Miracle well i wish i can have a similar one. I'm trying everything carbon dosing, iron, plant tonic, increased my CO2. Maybe i'm trying too hard lol. Thanks for giving me hope.

Ha hope.. I gave up. And then then it done from the tank within! There is hope sir! Just be patient

Mark Evans said:
Are you adding easy carbo by any chance?
Click to expand...

LondonDragon said:
Why do you ask this Mark? Was not aware of any issues with mosses and easycarbo, I know easycarbo can kill off liverworts like pellia, but never had any issues with easycarbo and mosses.
Click to expand...

I never said it did give issues to moss. It's the riccia that raised alarm bells.

paulsouthuk said:
Hi Mark is the addition of liquid carbon the correct thing to do. Do you think my brown mosses are dead? Any advise would be appreciated, thank you. Really interested in EI dosing too
Click to expand...

It could explain the pale riccia. If you want rid of the riccia, adding easycarbo will see it off for sure.

The mosses...I'm not really sure. I find lower dosing of ferts produce my best moss. But thats with my water parameters. Everyones are different.

Paulos AKA Londondragon your man for moss

Hi Mark, is indeed for the Riccia, although I did manage to grow it with success at the start with lower doses of EasyCarbo, yeah I also tend to have more luck with mosses in low tech setups, sometimes people get mosses already in pretty bad shape and some never recover/adapt.

LondonDragon said:
and I am in no way the man for mosses
Click to expand...

I beg to differ mate. Your moss has always been top notch. One of the reasons i've pushed hard to get my moss looking good.

For quite some time, i grew really bad moss. Always on the brown side.

All of this moss get's a good clean on a weekly basis. 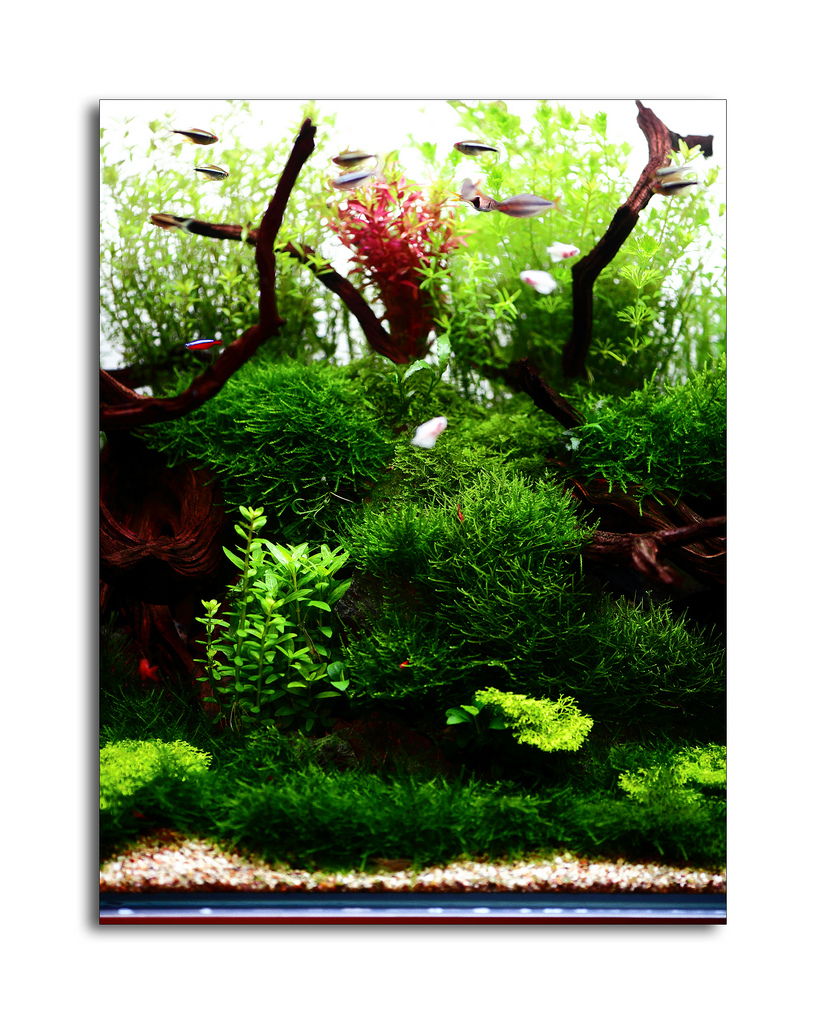 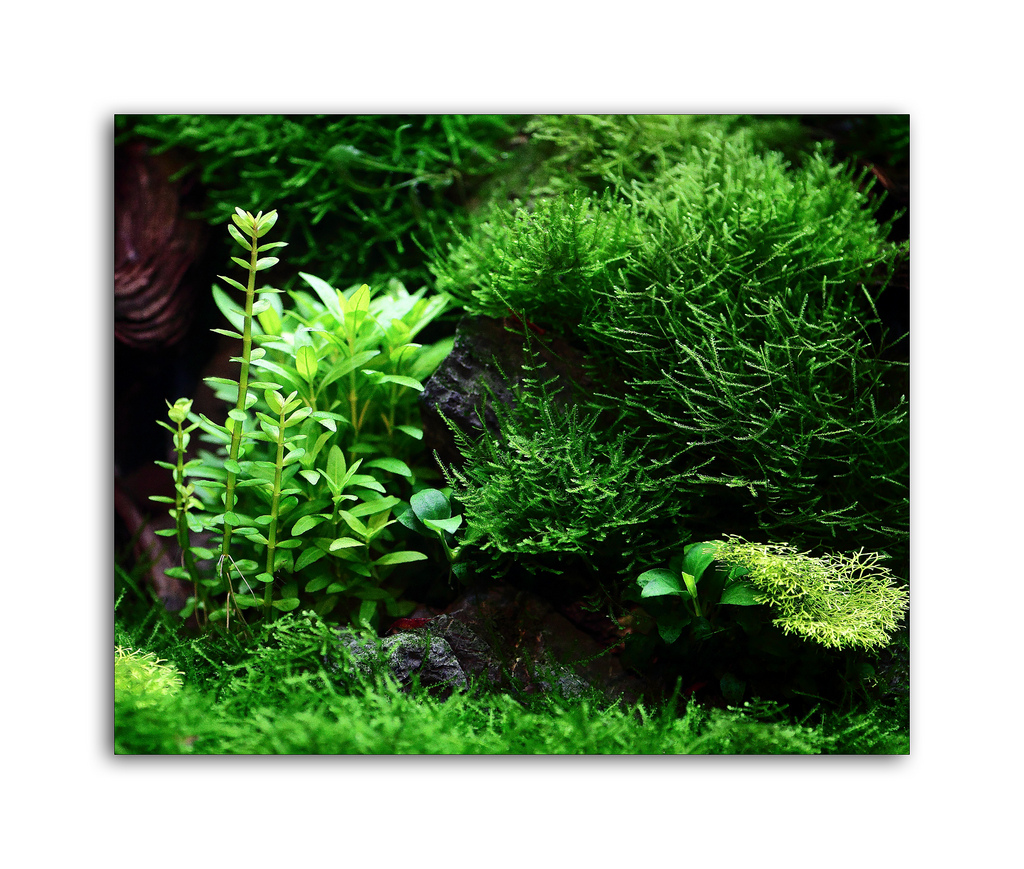 I haven't really kept decent mosses in a while now, tanks all be slacking over the past couple of years due to limited time for the tanks. But low temps do help mosses, I have kept them in high tech tanks with great results but found they do better away from the ground due to what you say, they collect a lot of stuff in them and eventually promotes algae, specially fissidens. Lots of shrimp do help also

When you have moss carpets. Such as the following image (tank left and right front corners) it's a must to siphon.

The build of dirt, detritus, fish waist and the likes can really be detrimental to moss.

Get into the habit of cleaning and trimming moss.

You can see the moss stones in place... 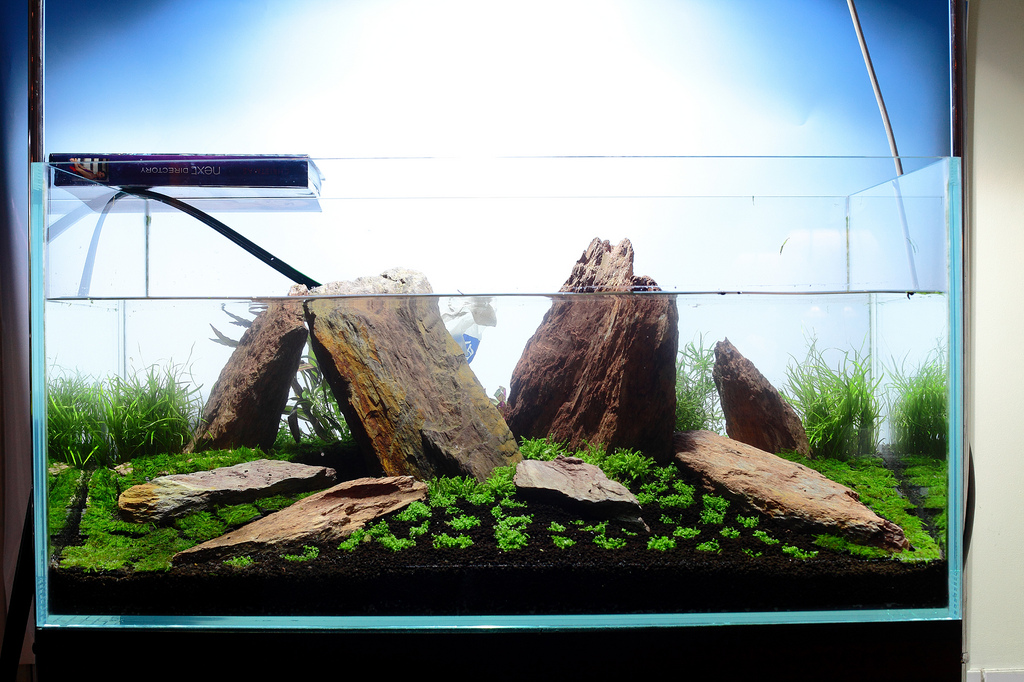 And to finish, moss left to it's own device's will grow bushy and thick... 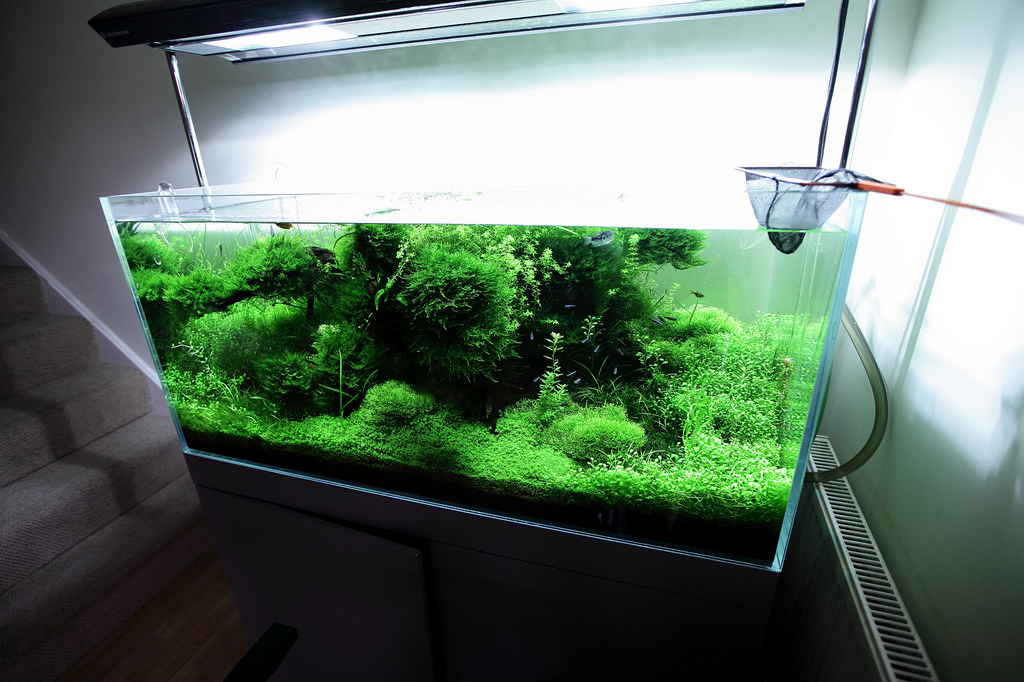 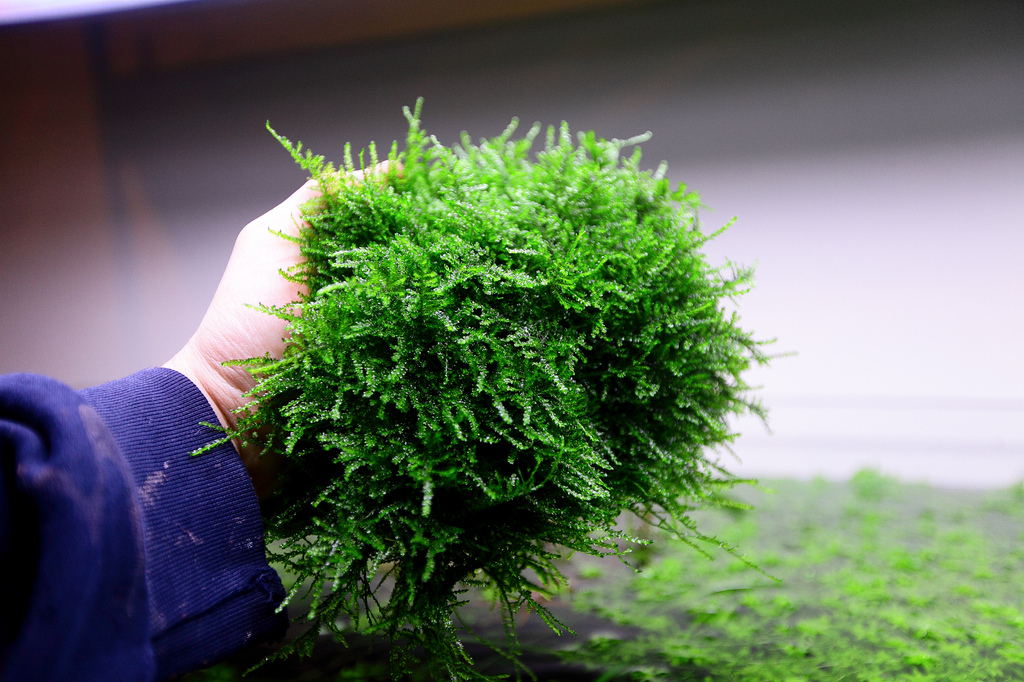 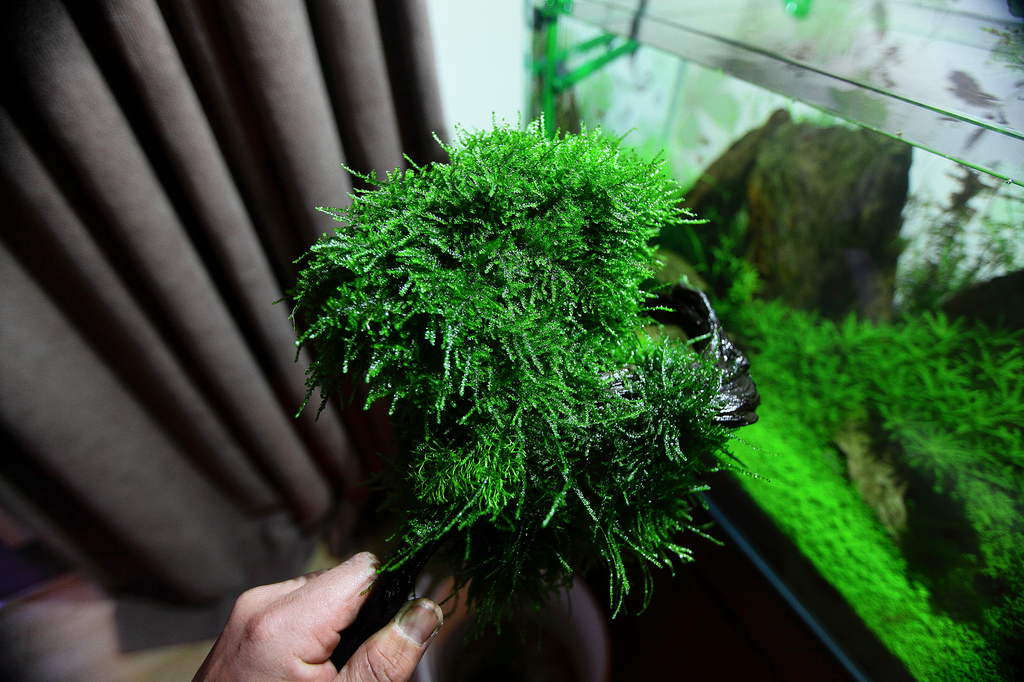 I was growing mosses in Jars on my kitchen window earlier this year and it worked out quite nicely.

I put it all in my tank and it started doing fairly well, however, do to issues with algae growth in former tanks I purchased some 'water lettuce' to shield some of the excessive light that I have. I think one or two things happened. They blocked to much light and/or sucked all the nutrients from the water column.

How much lighht and nutrients do mosses need?

leemonk said:
How much lighht and nutrients do mosses need?
Click to expand...

Ah... That answer surprised me. In that case I am at a loss as to a reason for all my moss dying in my tank.

Once I moved it into the tank, it took four weeks or so to 'get going' (growing green shoots), but recently it has just gone, there are parts of it sitting on the bottom of the tank (I need to clean), but it's all brown and spindaly.

I've built a low-tech tank and do NOT use fertilizer.

You got any photos lee?

leemonk said:
Ah... That answer surprised me. In that case I am at a loss as to a reason for all my moss dying in my tank.

Once I moved it into the tank, it took four weeks or so to 'get going' (growing green shoots), but recently it has just gone, there are parts of it sitting on the bottom of the tank (I need to clean), but it's all brown and spindaly.

I've built a low-tech tank and do NOT use fertilizer.
Click to expand...

Hi,
what lighting are you using? I'm guessing low tech = no co2 so I would guess judging by what you have said that it may be too much light.
Maybe try reducing intensity.
Cheerio
Ady
Re-education Journal.
NAtural Jurassic Journal.
Dragons Crypt Journal.
Sticks and Stones Journal.
Dusting off the old Fluval Studio 900 Journal.
Aquanano 40 CRShrimp tank Journal

I have an interesting unknown moss growing on the reinforcing bar of my Juwel Vision 180 tank.

A couple of months ago, before I invested in a pump & hose to pump water via a window, I used to syphon water into buckets and throw onto front lawn. Once while outside I was hit on the head by a lump on moss blown off the house roof. Taking this as an interesting planted tank omen I took the moss inside and placed the 5cm patch on the reinforcing bar on a small piece of kitchen towel that soaked up water from the tank.

Well it turned quite green, but as being only a couple of cm away from 25W T8 "daylight" light it started to go brown and wasn't happy.

I moved it into the tank, held to the bottom by a lead strip, but it continued its brownness and eventually I binned it.

However in the recent weeks, moss has started appearing on the reinforcing bar, obviously it left some spores.

It is growing only under the "plant grow" tube, rather than the whiter "daylight" tube that I tried before, but is progressing well along the bar and no sign of browness. Seems to be getting water, probably sprayed up from the air I have on at night.

Will leave alone and see what happens.
M

my mosses grow extremely slowly, and are dark green, the new growths are somewhat brighter, and at present they just get overtaken by hair algae, so have taken most of it out (java moss)

why does moss grow a darker green is this because of too much light? I add CO2 and both ferts

as for my flame moss it keeps growing white hairs anchoring hairs? as opposed to algae I think, it also turned a dark green and looks like it has stopped growing

i love the look of moss but my tank seems to hate moss
You must log in or register to reply here.
Similar threads