Million said:
Thank you for the replies. I was inspired by this guy featured on PFK: http://www.practicalfishkeeping.co.uk/readers-tanks/articles/2016/8/18/your-tanks-kris-oddy 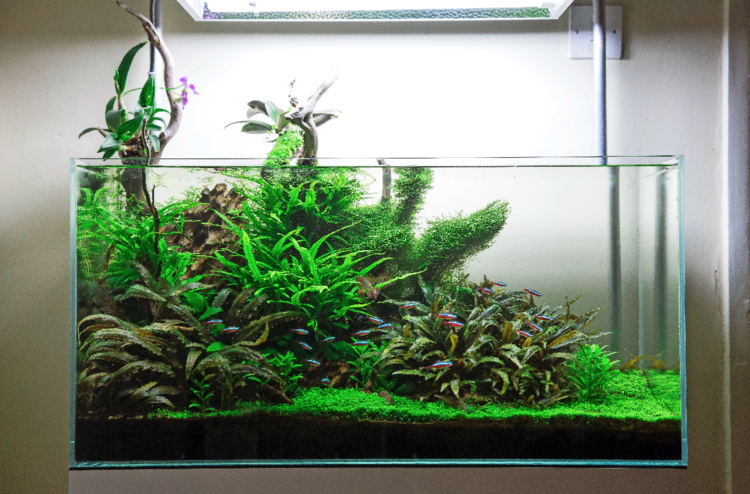 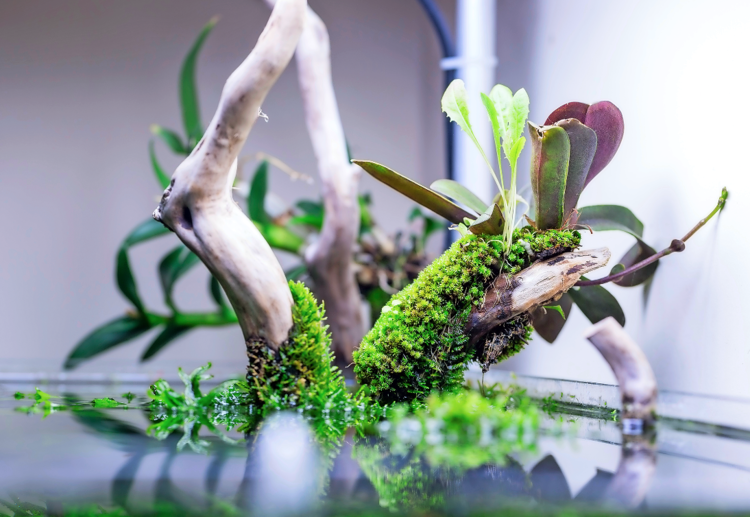 Nice picture.. I guess he also has the same isue and is strugling with this plant.. The purple coloration of the leaves is for many orchides a sign of getting to much light and air to dry. If to long in this condition it will turn necrotic (yellow and black) and the leaf will die. I think this picture was taking rather very short after planting it and i wonder if he could keep it long term.

That's why i decided to go with a small Bulbophyllum, they are among the smallest. To keep it as close as possible to the humid bed its tied uppon.. But i still failed..
Cheers,
Marcel..
Tanks for watching. 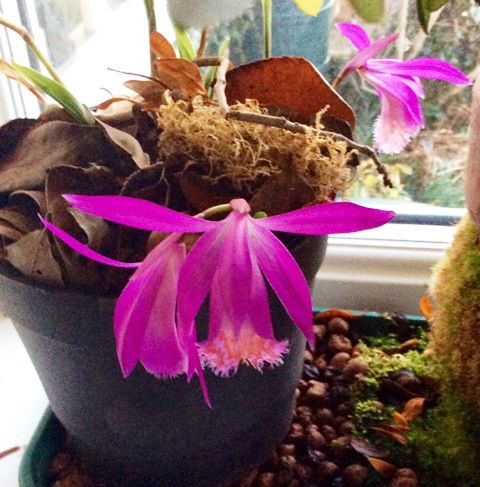 This is 2017 offering, only five flowers and in two distinct flushes.

Hi all,
Re-potted the Pleione today, it was still dormant,so I don't think it will flower until April this year.

I have Hippeastrum "Exotic Star" in the kitchen at home, it has needed re-potting for a while (it has two fairly large side shoots and has split its pot), usually it has four flowers on the scape, but I actually like it better with two. 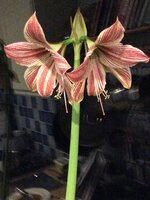 dw1305 said:
Re-potted the Pleione today, it was still dormant,so I don't think it will flower until April this year.
Click to expand...

I'm hoping there are another couple of flowers still to appear (on the other side of the pot). 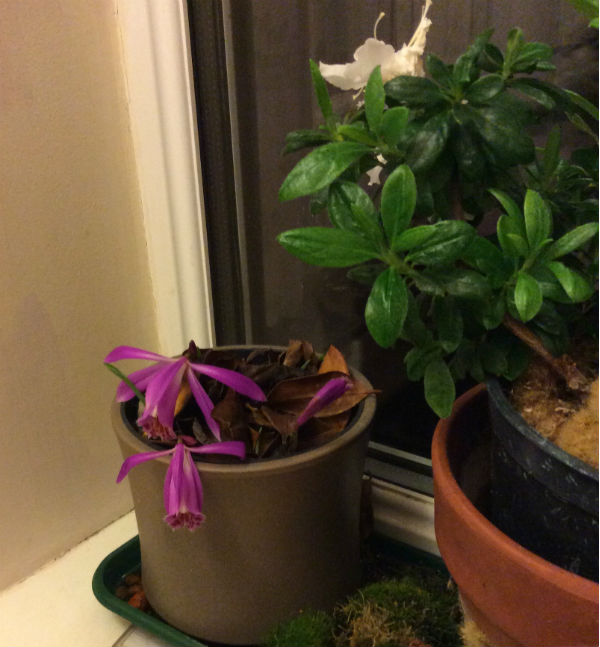 The Azalea is looking a <"bit better too">, partially because it had quite a drastic prune and re-pot.

This was because it wasn't watered while I was away last spring and I assumed it had died. I pruned off all the dead wood (which left really short stumps) and waited for a couple of weeks. I was just about to compost it when decided to choose life and re-sprouted.

I re-potted it and gave it a feed, the Azalea has re-grown well since but the fertiliser has burnt all the moss. 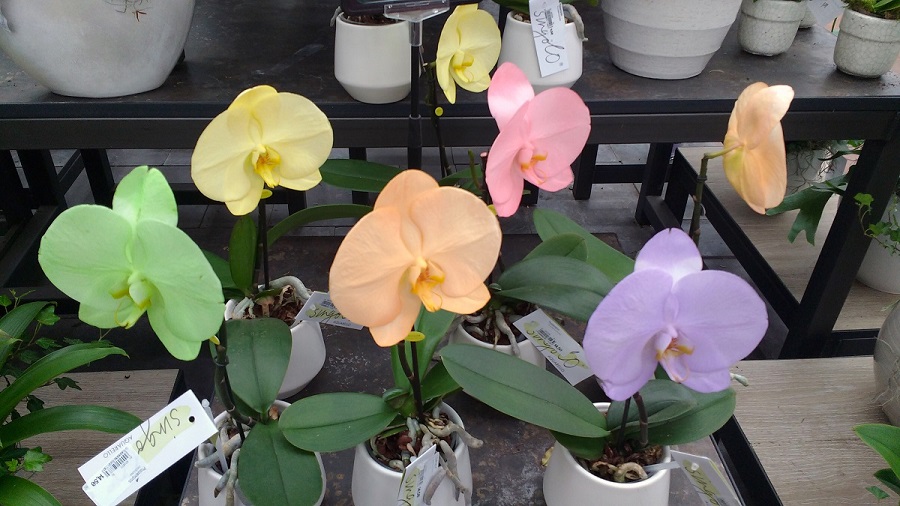 dw1305 said:
The Eucharis (Amazon Lily) in my bathroom is flowering.
Click to expand...

This is the 2018 incarnation. I've hacked it into two since 2015, but the "bathroom half" is now enormous again, with six flower spikes, and needs dividing and re-potting again. The other half is in a corridor at work, where it is a lot less luxuriant, but has better foliage. 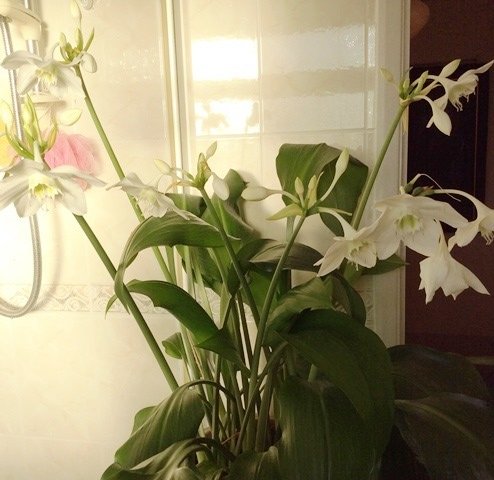 This one lives in our shower room (NW) facing, it is Streptocarpella "Boysenberry Delight". The individual plants don't live all that long (they always eventually rot off at the root), but it is incredibly easy as a cutting. This one is about 18 months old, and should be good for another year at least. 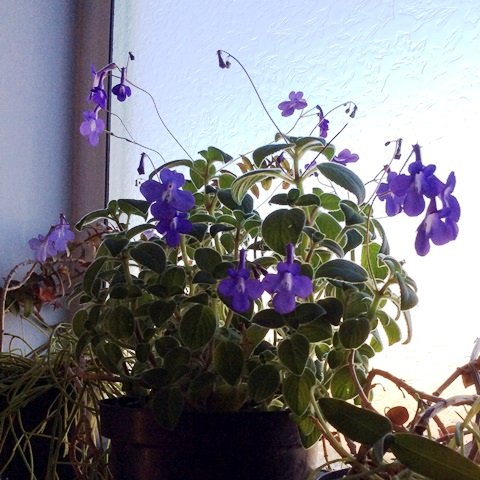 I have Streptocarpella saxorum as well, which also needs fairly frequent propagation, and is a leafier, more rangy plant with fewer flowers.

My wife has literally a hundred orchids. I’ll seek out the ones in flower and take a few pics.

We have a homebase near us that heavily discounts their orchids when they think they are done flowering (half the time its got a new flowering spike coming and its the first flower slightly going). I've picked up dozens for my mum as she loves them and never paid more than £2, normally only a pound. Had a couple really nice brown and yellow flowering ones which I think might be Oncidium (or similar to Google pics). They all seem to thrive on neglect, they get watered with our hard norfolk water, left in a cold conservatory in the winter and come back flowering year after year.
G

I have a small selection in my vivarium, I choose miniature varieties to keep a sense of scale against the small inhabitants.

Orchids in such a humid environment are challenging, some are doing well, some surviving and some regressing - but the challenge is worth it

I've tried to keep it mostly contained to south american species but there are a few others in there also (some un-named) :

Some of the above are on order, a couple in the vivarium are about to come into flower so will get some photos on this thread when I get chance

Here are a few random photos i've already added to my build thread : 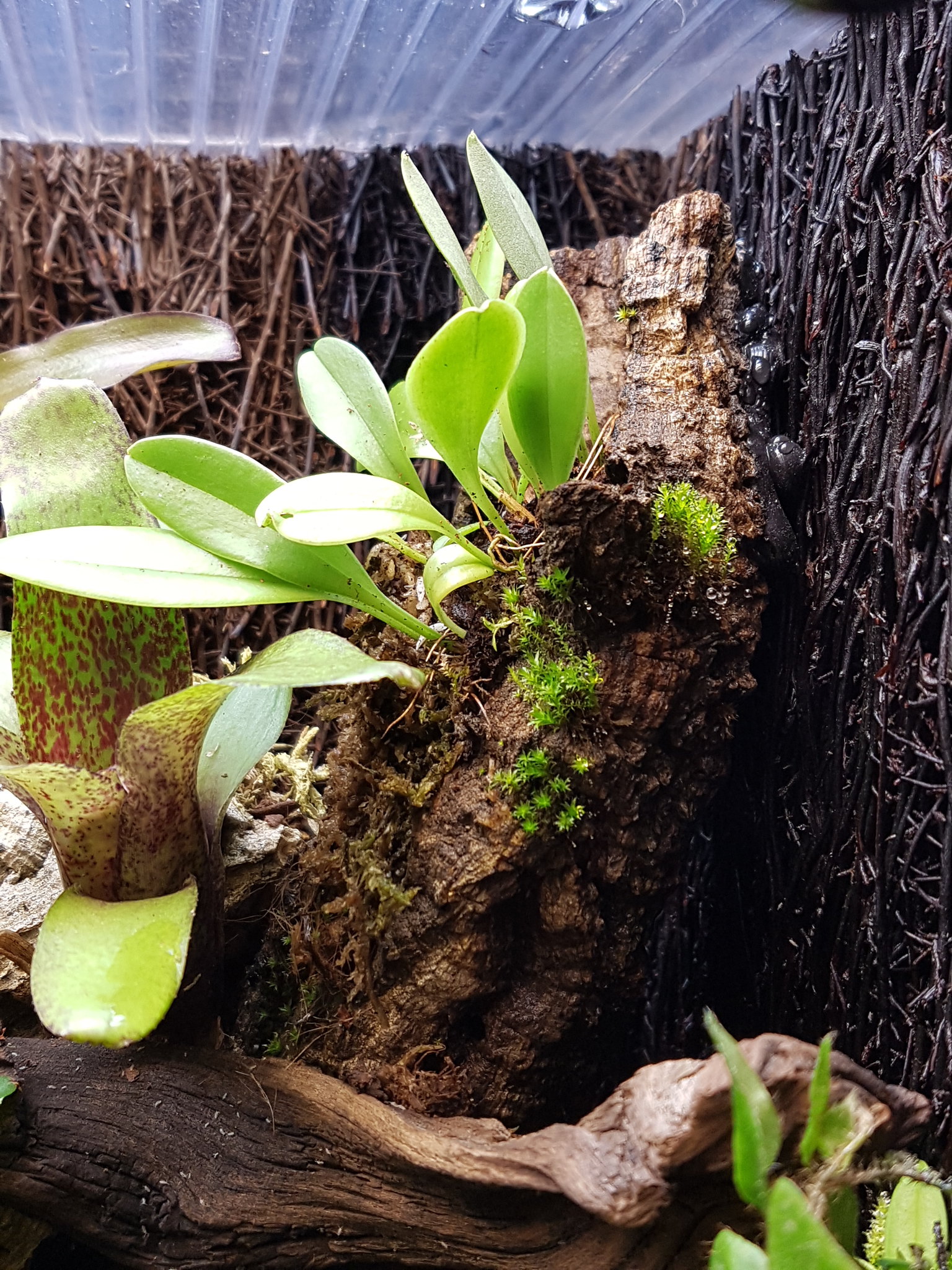 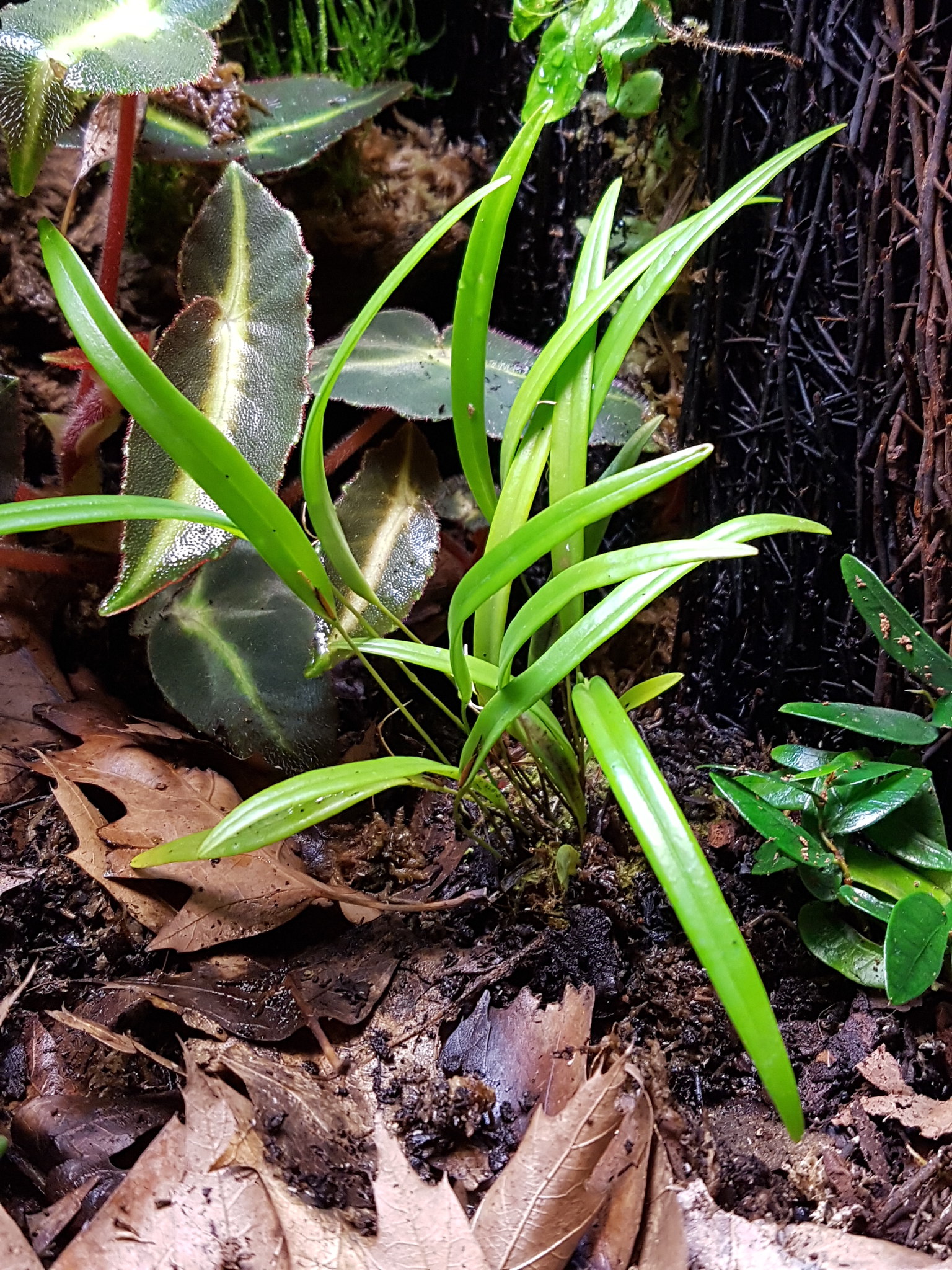 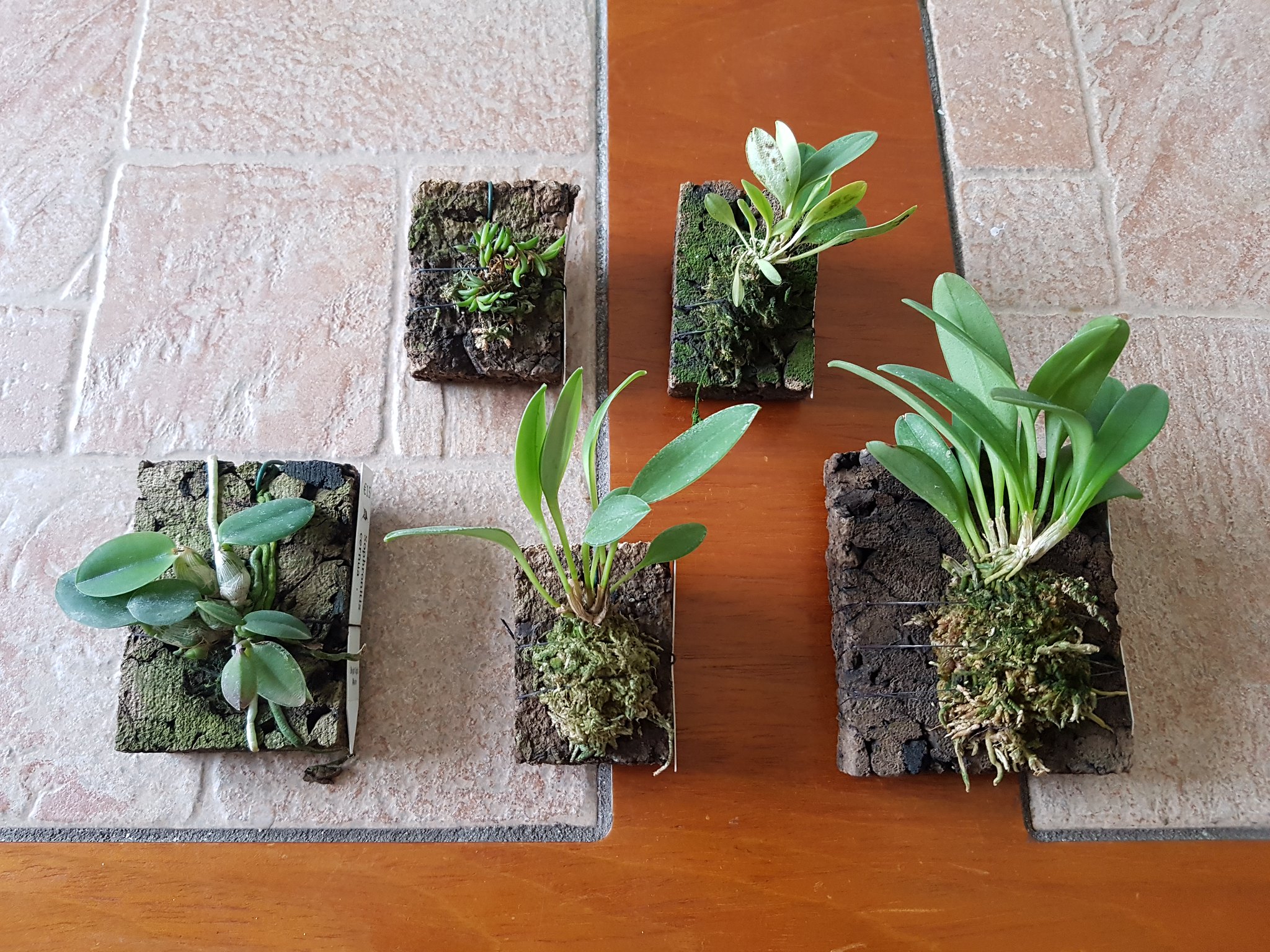 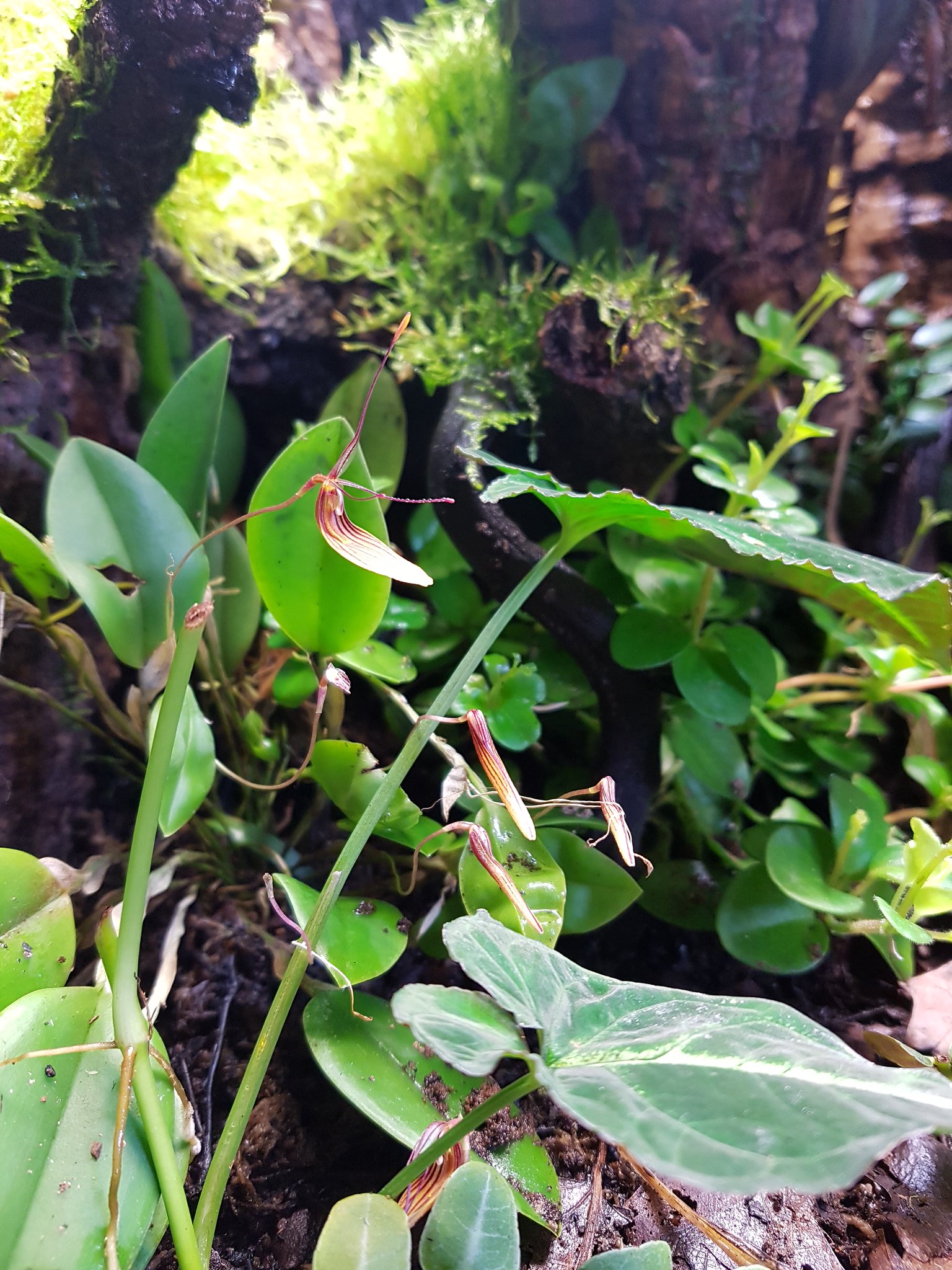 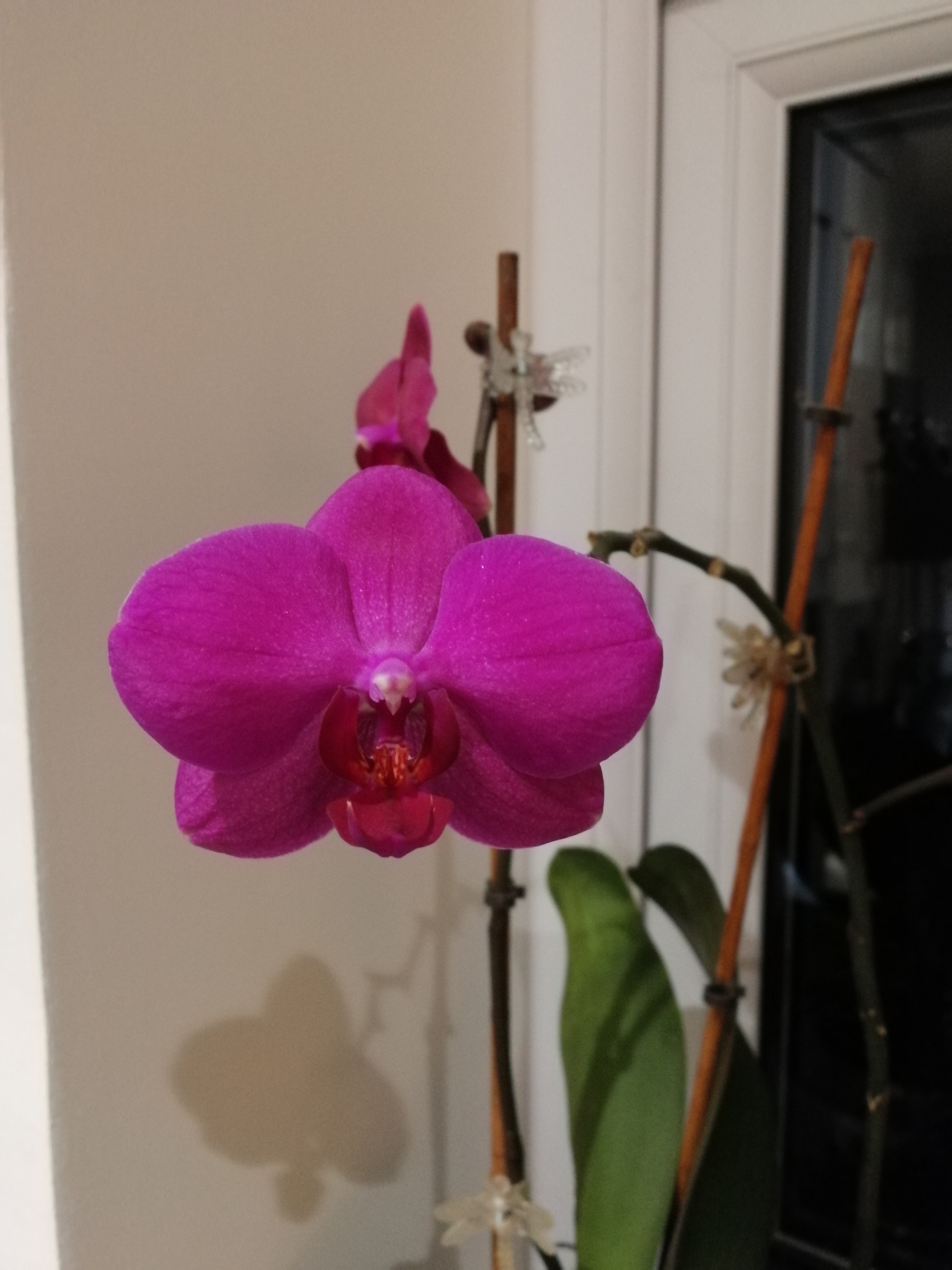 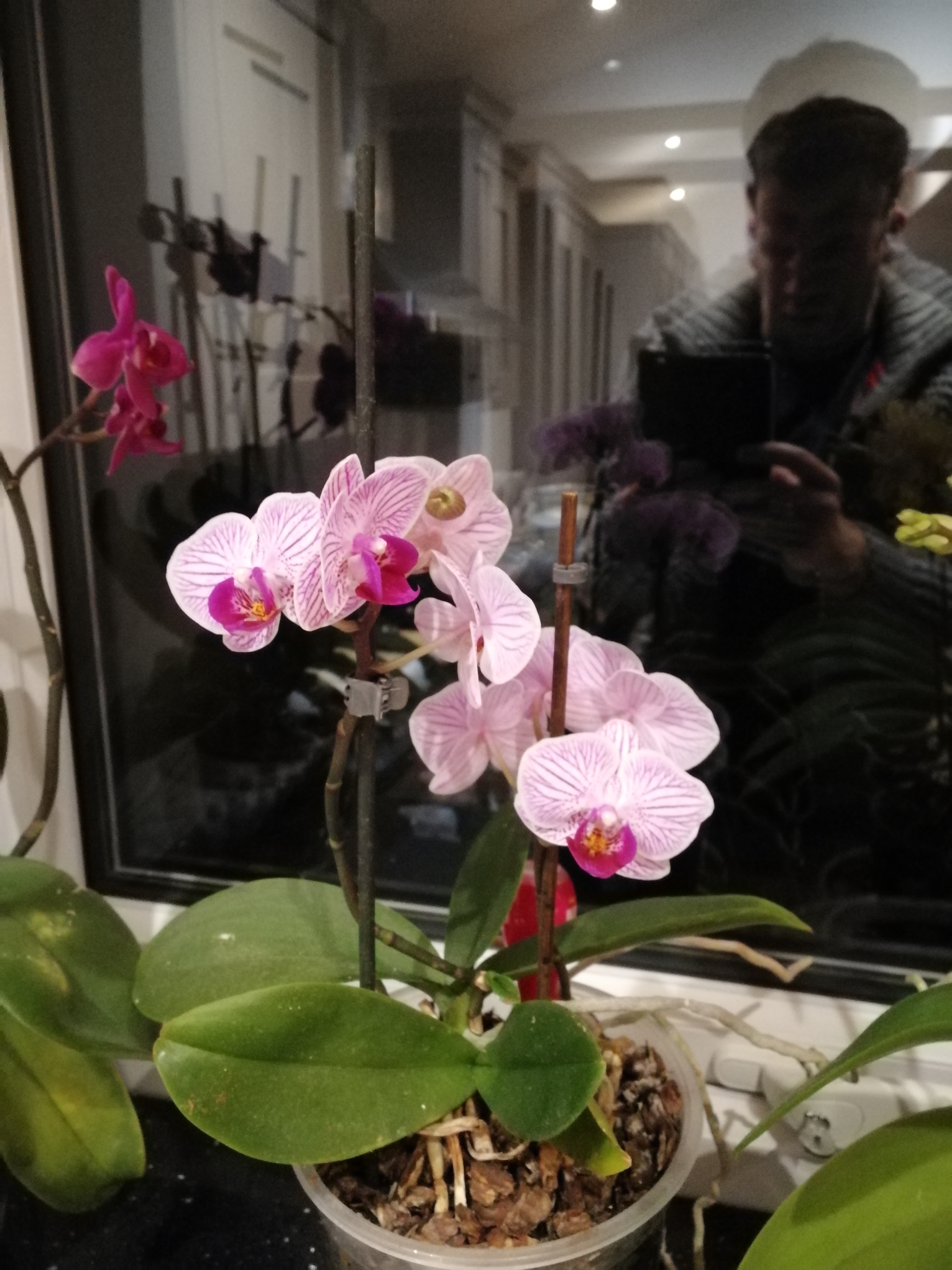 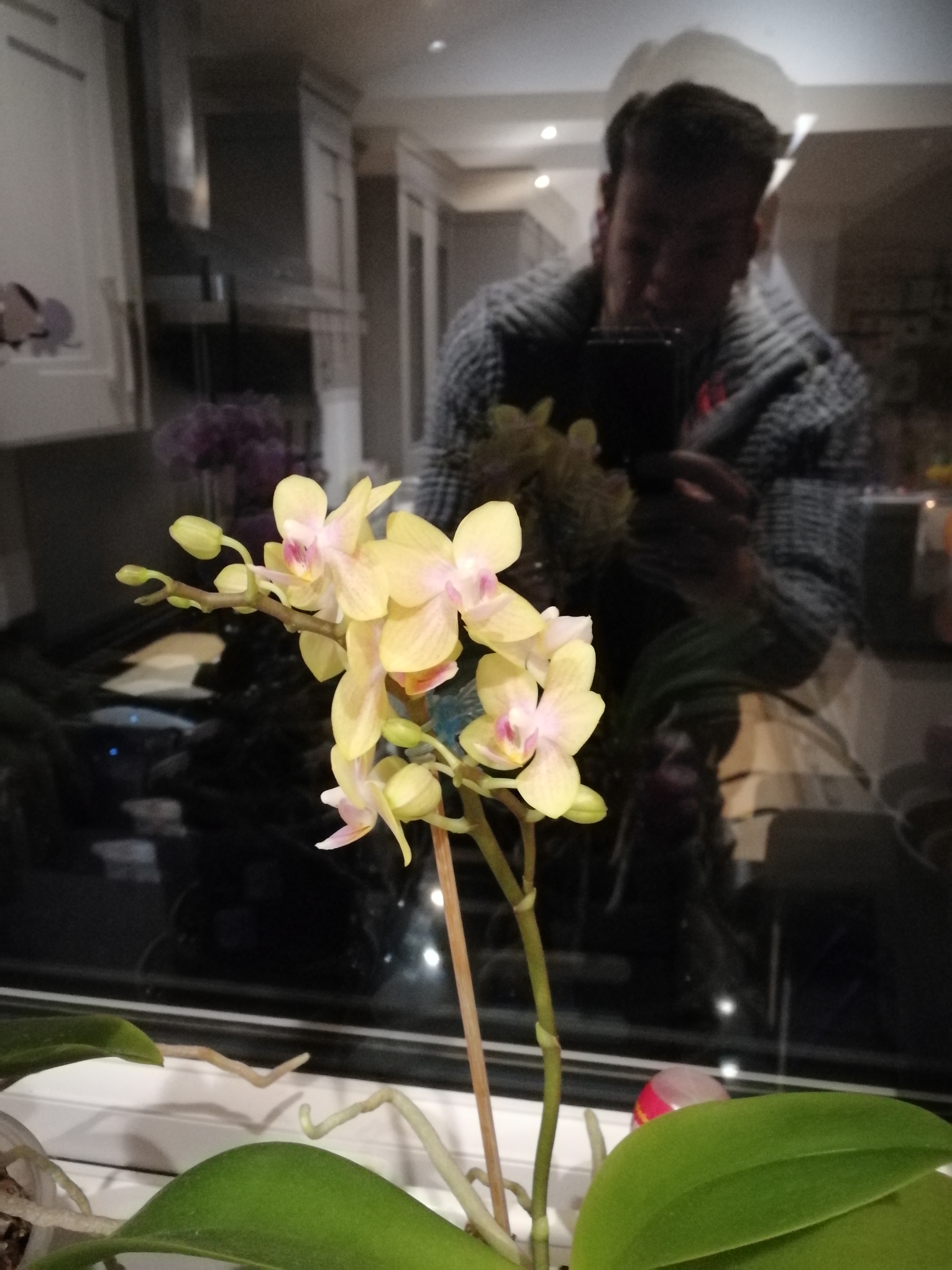 Apologies for being I the shot. These were taken back in February. Nothing special, just rescues from a supermarket.

My leomesezia "lava burst" that I recently acquired. My first dabble in orchids 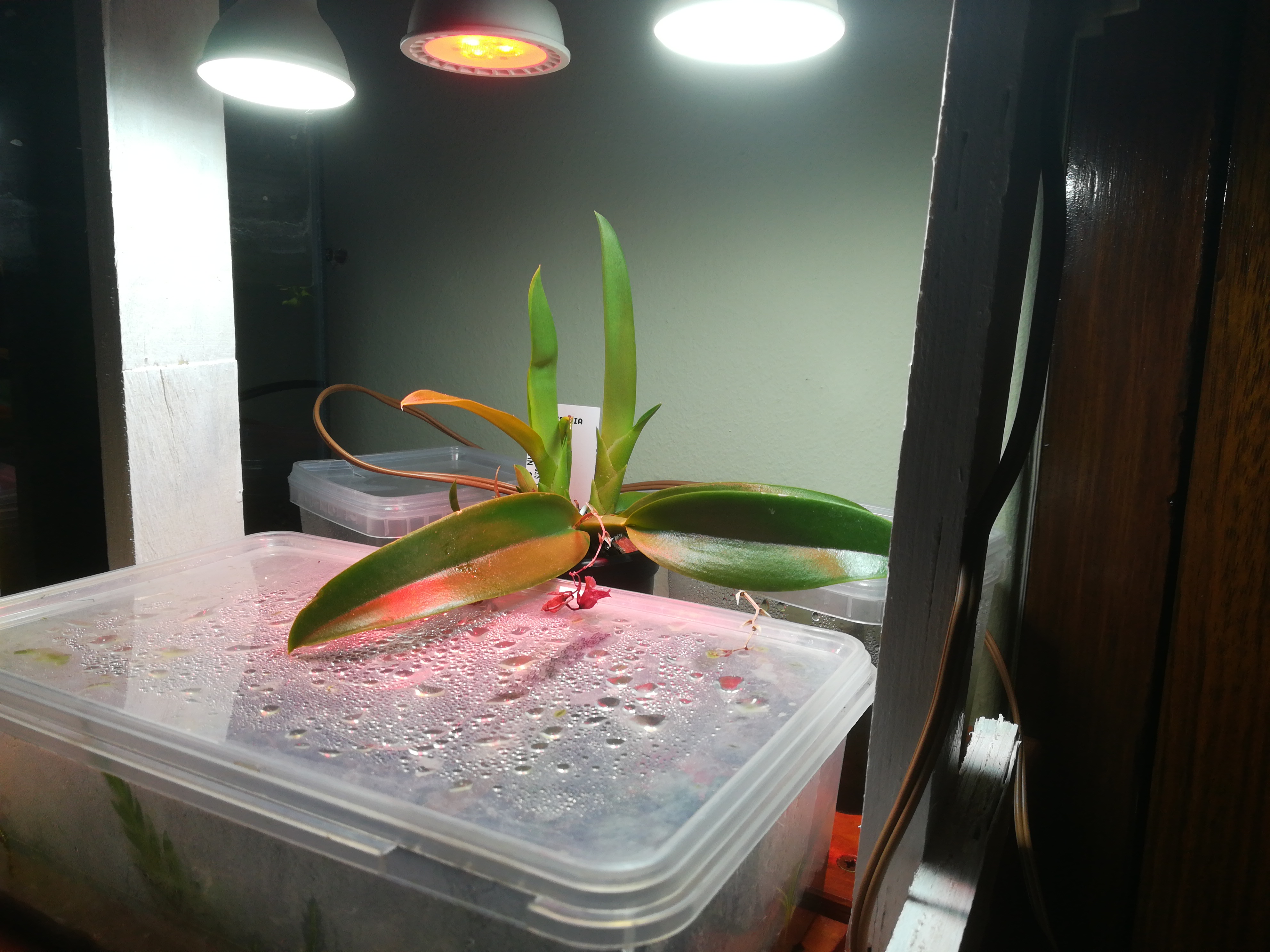 I love this color 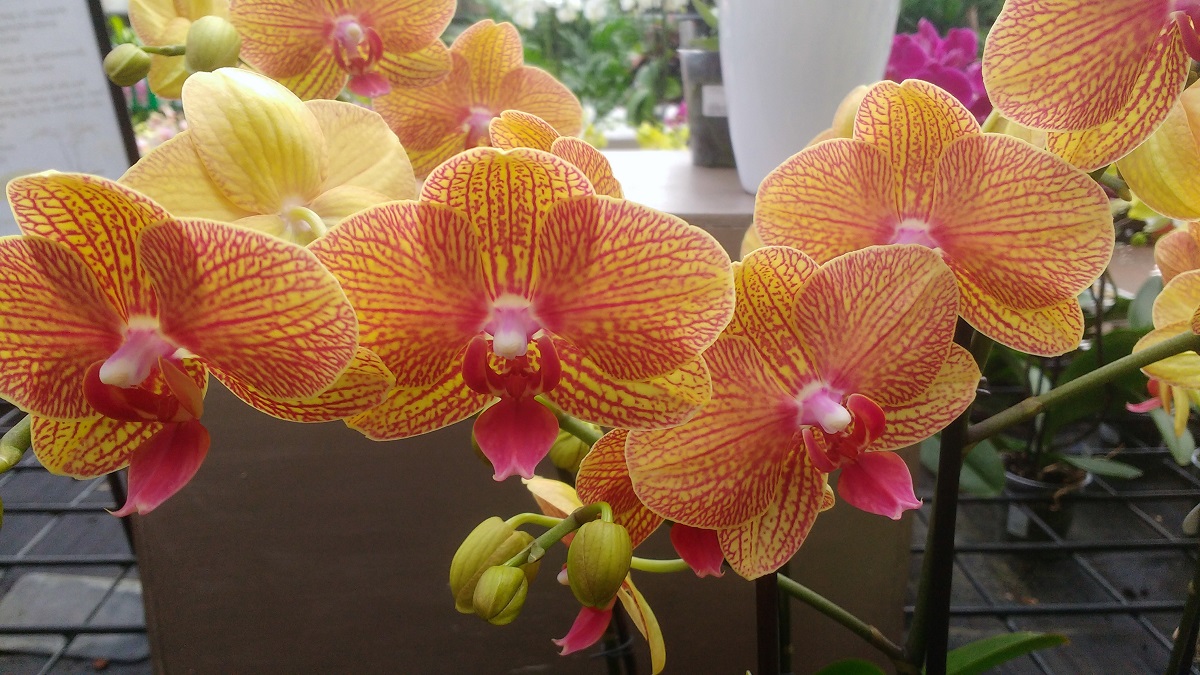 Agreed! I see you have plenty more hidden back there

mort said:
heavily discounts their orchids when they think they are done flowering (half the time its got a new flowering spike coming and its the first flower slightly going).
Click to expand...

That is where I got most of mine from.

mort said:
nice brown and yellow flowering ones which I think might be Oncidium
Click to expand...

It is more likely to be a <"Cambria">, a genus of complex multi-genera hybrids that have been selected for their suitability as house plants.

I'll defer to your far greater knowledge as usual The few I bought her have done really well and there are a couple of different varieties. I'm quite partial to the brown and yellow flowers as they are subtle and interesting.

mort said:
I'm quite partial to the brown and yellow flowers as they are subtle and interesting.
Click to expand...

I like them as well, I used to have a nice yellow and brown xCambria, name unknown, and I also used to have "Nelly Isler" (from earlier in the thread). Unfortunately I don't have either of them now, but I will try and pick up some more remaindered ones when I get a chance.

Flowering above, would be a lot more tricky to keep.

dw1305 said:
Flowering above, would be a lot more tricky to keep.

What do you mean?

Will micros cause any issue with orchids?