It’s been a while since I posted something here on the forum.
So I would like to share a cube aquascape I set up a few weeks ago.
The tank Is a fluval Chi.

I bought this for 10£ on the festival of fishkeeping. They normally have some good prices during the show, specially on second hand tanks.
However this year they were selling these ones new, the fluval Chi originally comes with light and unit that’s designed specifically for this tank, however this one came only with the tank (probably why it was so cheap).
That was how they were selling them and to be honest it’s why I bought it. The tank looks great, but I really don’t like one size fits all package kits, I like to choose my equipment.

I was eager to scape this so from the show I went straight away to my local maidenhead aquatics to get some substrate.
I always say patience is virtue in aquascaping, however fail to follow my own advice.
For this scape I decided to go with JBL susbtrates, I have had success with the proscape line and mostly is the only one I can find locally.

I bought a 9 litre bag of JBL proscape and a 3 litre back of volcano mineral.

The next day as the weather was ok I set my self for some relax session assembling my new tank in the garden.

Filter : All pond solutions hang on back filter


I used volcano mineral inside nylon stocking to build up height. The purpose was mainly to avoid the scape collapsing as i wanted to bank it up quite high. This way the substrate is more stable, I was able to use less rock and the larger grain size of the volcano mineral prevents anaerobic pockets from being formed. 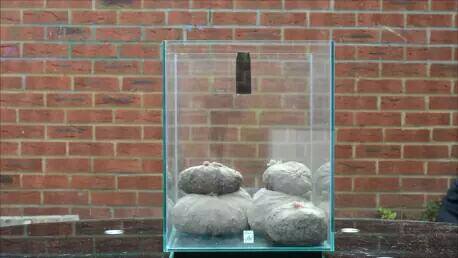 The rocks are maple leaf rocks. I have a lot of this around, I bought 30 kg of this in 2013 for my 200 litre fluval roma aquascape, the roma is long gone but I broke the large rocks into smaller ones and have been able to do quite a lot of scapes with it. They are easy to break, have a lot of detail and the white veins can be used to create good effect inside the tank. 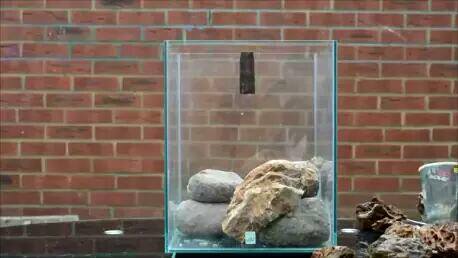 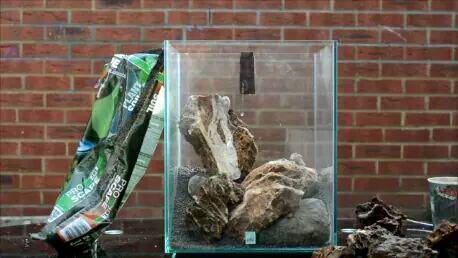 As you can see the nylon bags help in keeping the rocks stable and are really keeping me from having to use a lot more rock to get this hardscape frame stable. 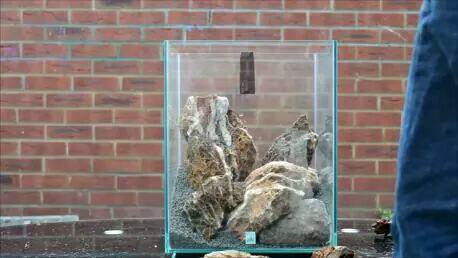 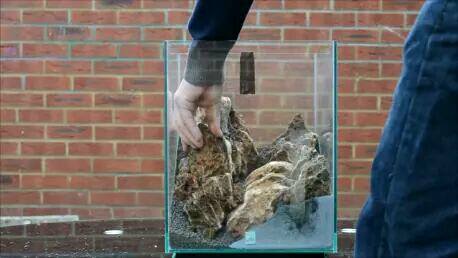 This is one plant only iwagumi design. The plant I am using is Micranthemum monte carlo I have being growing emersed out of a few cuttings. 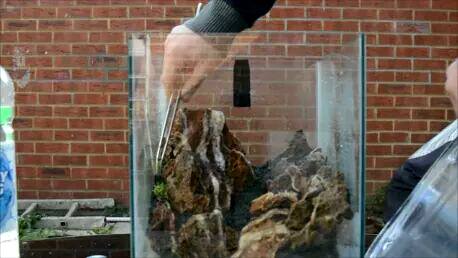 Here’s the assembly final picture of the tank. 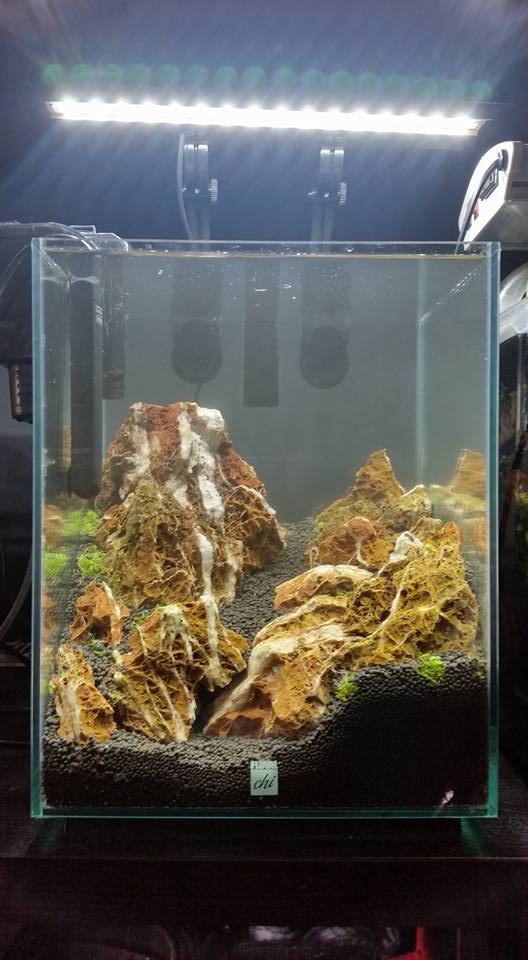 However I wasn’t really happy with this design as I thought it was really lacking detail, specially in the middle.
So the next day I drained the tank and with some cosmetic sand and smaller maple leaf pieces did some changes. 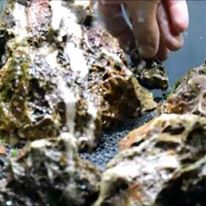 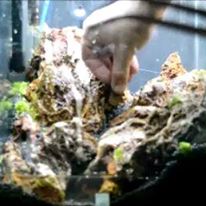 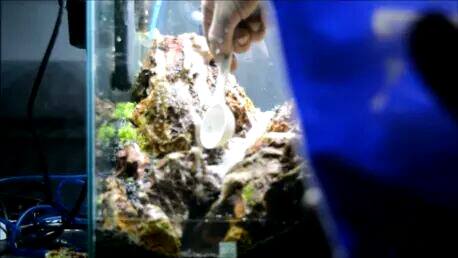 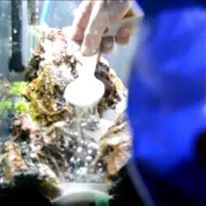 So this is the final design of the scape. 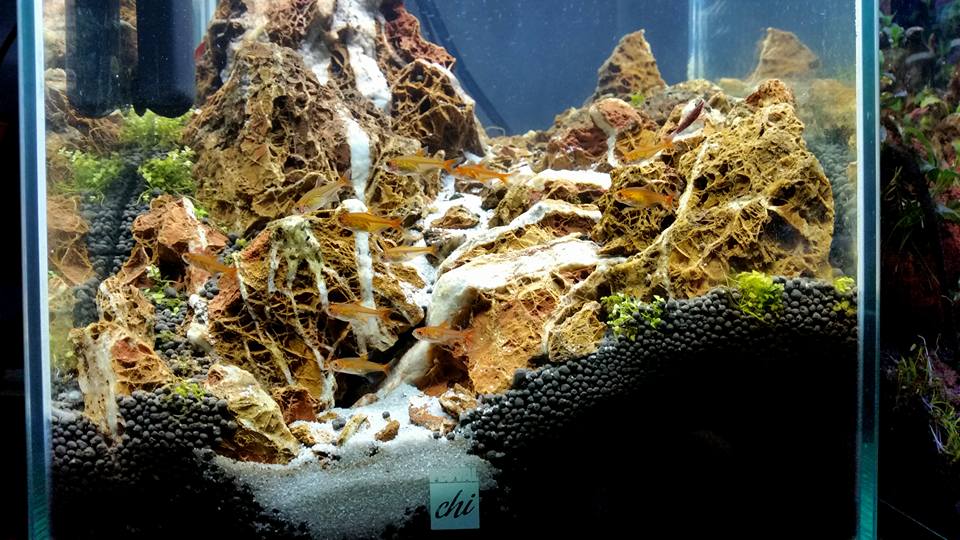 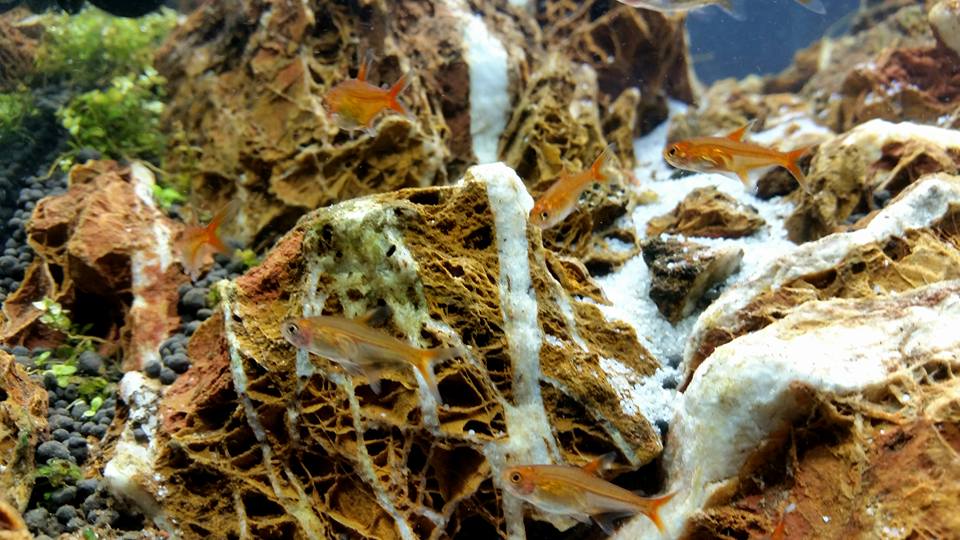 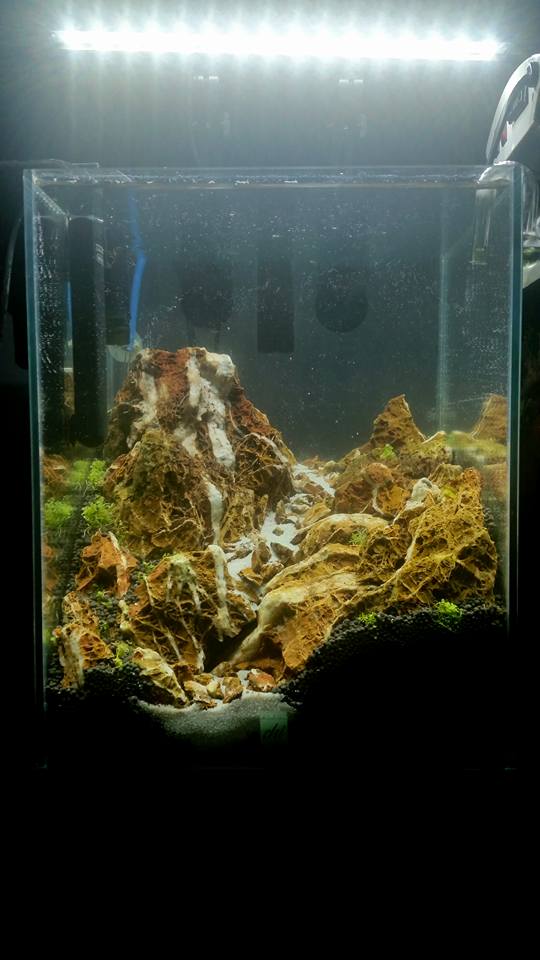 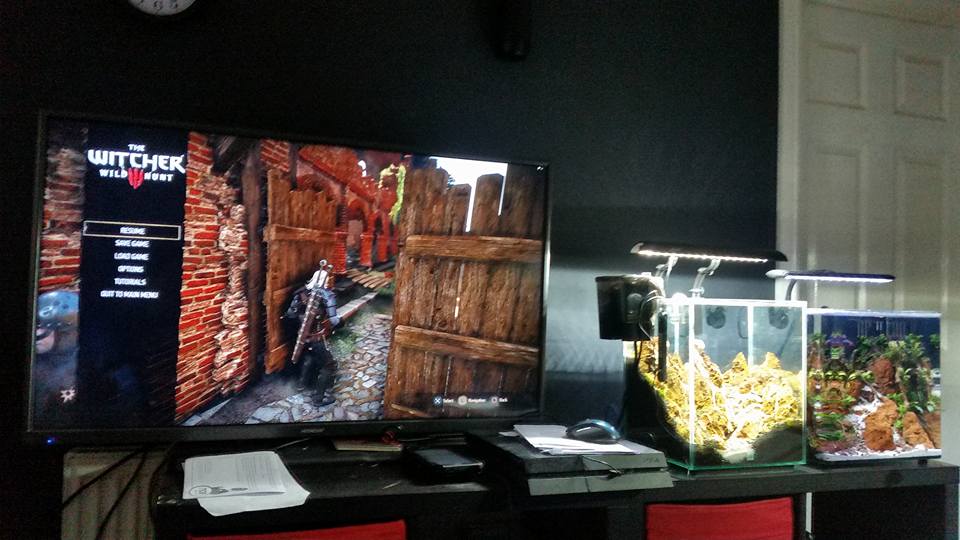 The plants were grown emersed, so they are not growing as fast as one would expect due to the emersed/submersed transition.
I did daily water changes on the first week, every two days the second week and am now doing once a week.

Fish were added last week, I got 10 ember tetras for this scape, the size of the tank didn’t really allow for anything fancy.
I was unlucky though as 3 of them decided to go the suicidal way on the first 24 hours and jumped out of the tank.
Currently 7 ember tetras on the tank and they seem to be doing fine.
They were quite shy on the first few days, staying all grouped together on the bottom in the front of the tank, but now they venture out and explore the rock formations and most of the tank.
They still seem to feel safer a the front though.

My co2 regulator broke just 2 days ago so all my tanks are now without co2, this one included, i am hoping that the plants will manage to hold until the new unit from co2 art comes next week.
I had a word with them yesterday and because they are required to pressure test the regulator after assembly for 24 hours it would not arrive before the weekend.
I love this tiny little scape, the rockwork looks amazing and even without the plants already makes the tank shine in my living room.

So I hope you like and hoping to get some feedback on this scape.

Below I will post the videos of the assembly of this scape from my youtube channel just if you’de like a more in depth look at how it was setup.

You were actually lucky not getting the Fluval Chi filter/led part... It's mostly useless for a planted tank...specially so near to the glass.
The American Pond - Pond (planning)
You must log in or register to reply here.
Similar threads