Should look nice when it fills out.

Lower temperature water can hold more oxygen in the water, so when the plants produce oxygen it cannot dissolve into the water quick enough - although my bets are on the water change/ fill up...
Aaron North
My Flickr Account | Equipment needed for setting up an FE | Algae & Nutrients


aaronnorth said:
Should look nice when it fills out.
Click to expand...

Thanks Aaron, and cheers for the plants

Thanks George - I cant wait to see how it develops. Still reckon it might need another colour in the flora, but we'll see how the acicularis develops, and a bit of e tennelus too.

I replanted the acicularis last night (whilst doing a 80% w/c), planting alot thinner (but not stem by stem !). I split the previous 10 clumps into 30 clumps, which should help it along. I also added a few e tennelus plants from my discus tank, but they're not the best specimens so i'll see how they go.

My cherry shrimp arrived from LD, so they went in there yesterday too - thanks Paulo. 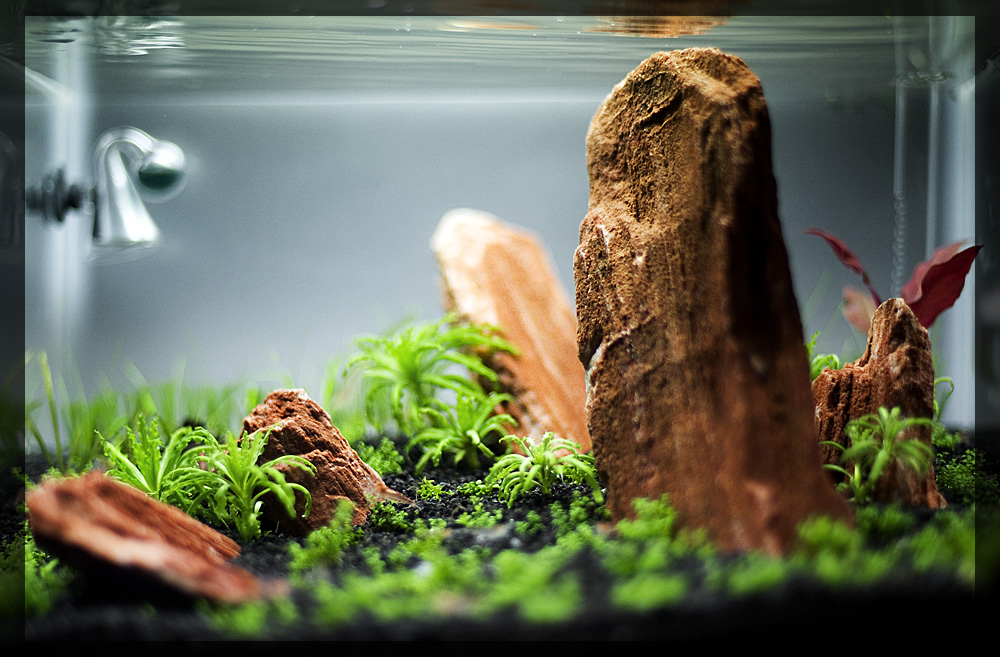 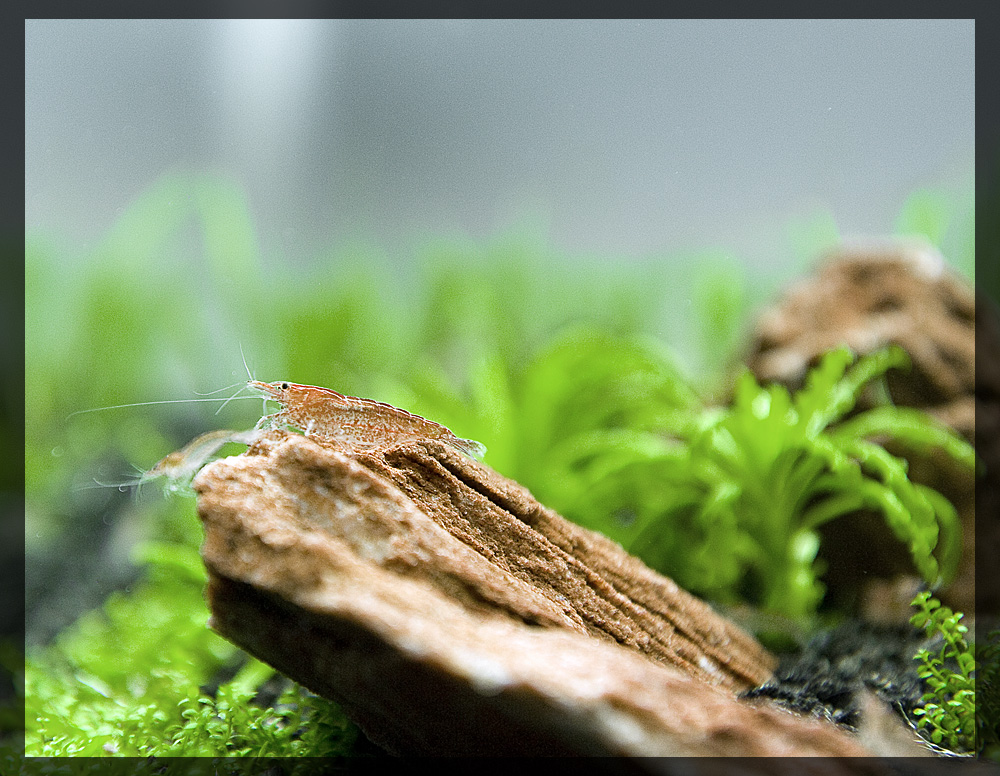 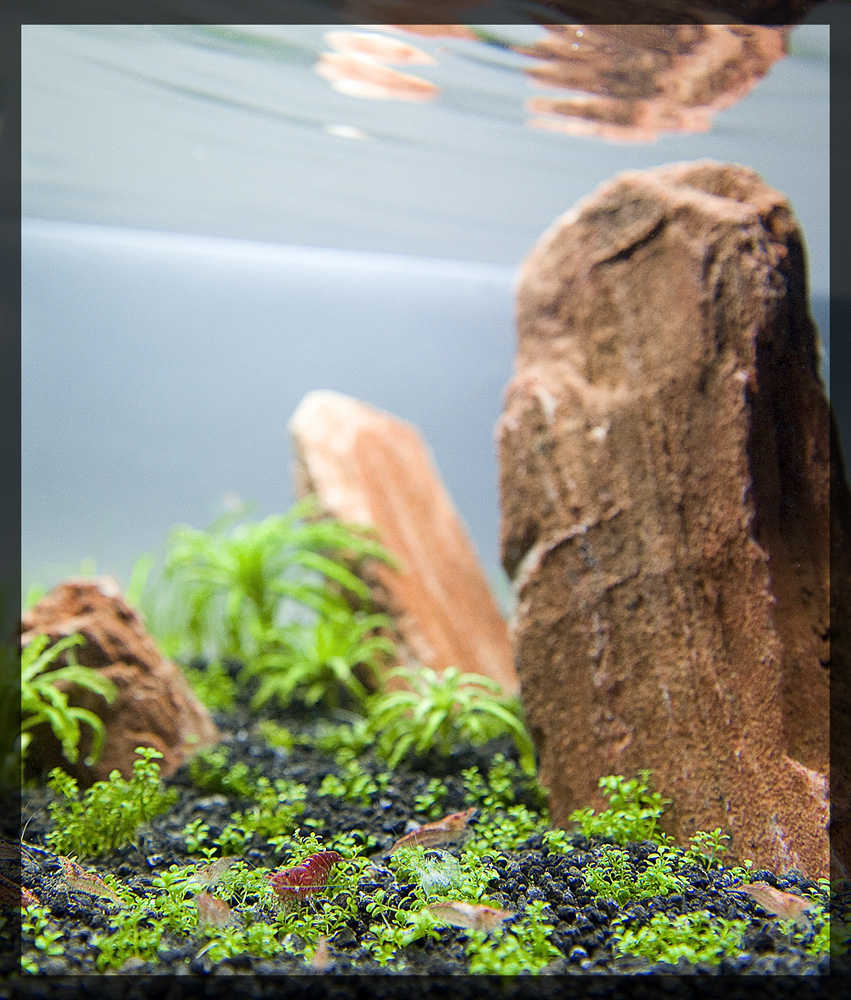 Its a great little lens Mark - allows so much light through it. Not easy to focus up on a shrimp though

Nice photos too. Have you sharpened the images? They look a little noisy on my monitor.

I use a HP filter for a degree of sharpening - its a technique I use alot with my jobs (I'm a retoucher ), as it gives a slightly 'crunchy' look. They're also shot a high iso which does show a bit more noise.

Those photos are good too.
Alistair.

I use a HP filter for a degree of sharpening - its a technique I use alot with my jobs (I'm a retoucher ), as it gives a slightly 'crunchy' look. They're also shot a high iso which does show a bit more noise.

Oh cool. HP = high-pass? Can you go into more detail? I like the 'crunchy' effect.

Here you go, in PS you duplicate your Background layer (or if you have multiple layers, duplicate all your layers and merge the dupes to give you a single layer version of your image on top of the layer stack).

Change the blending mode of the new layer to Overlay, then go to High Pass in the filter menu, and use the slider to judge how much you want - its best judged when viewed at 100% and I usually overdo it a bit at this stage. Usually between 2 and 8 works well, but it depends on the res of your file and its contrast. You can then play with the opacity of that layer to reduce the effect. Try the blending mode on Soft Light too, it can be nicer sometimes

Nice one, Tony. I may well give that a go. Thanks.

Tank is coming along nicely, shrimp will love it in there What you need is a good macro lens.
Probably one of the best which is also the one I have in terms of value for money is the Tamron 90mm Macro 2.8.


George Farmer said:
Nice one, Tony. I may well give that a go. Thanks.
Click to expand...


LondonDragon said:
I need a nano tank, they are great
Click to expand...

They are indeed. I'm loving this one, its so easy to work on compared to my discus tank


LondonDragon said:
What you need is a good macro lens
Click to expand...

You're right Paulo, I'd love the Nikon f2.8 one, but unfortunately the new camera has to come first 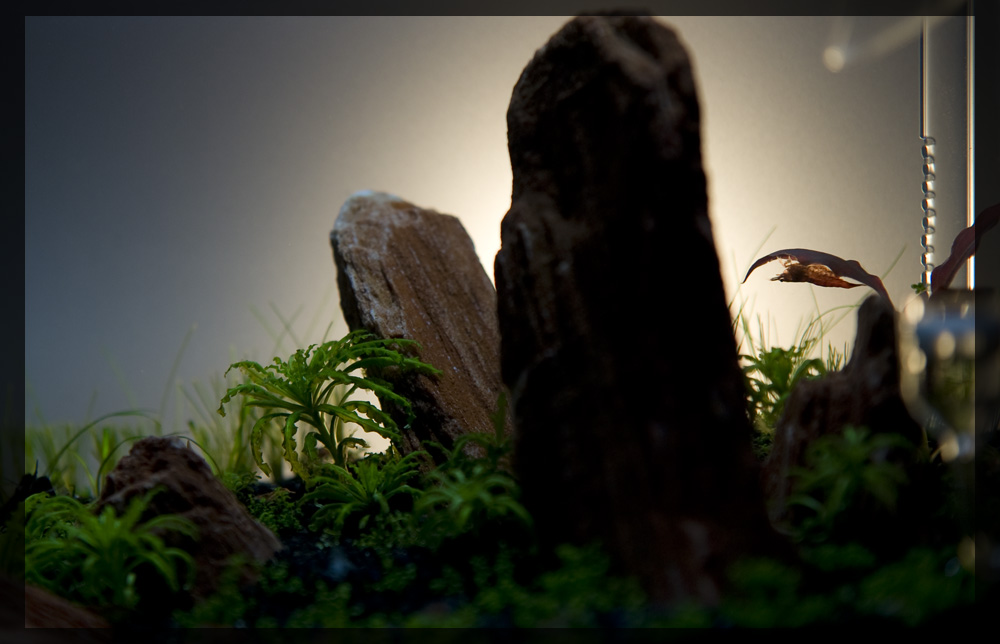 This is starting to look really cool, it'll look great once the HC has grown out. I like the rocks.


hellohefalump said:
This is starting to look really cool, it'll look great once the HC has grown out. I like the rocks.
Click to expand...

Its a week since planting, so I thought I'd add a couple of pics to show the progress

I've got a nice daily routine with it now - 25% water change first thing in the morning, then dose .25ml TPN+ and .25ml Easy Carbo. The COS switches on at 8, and the light at 9.30, then the CO2 off at 2pm and the light off at 3.30pm - this gives me a greeny yellow drop checker for most of the photoperiod.

I've had random pearling going on, the first time was after an afternoon water change, then the other there was mid afternoon. It seems to pearl more when the flow on the filter is turned down - I guess the faster flow displaces more of the O2 and CO2 ?

The inhabitants are now in - about 35 cherry shrimp from LD, and 5 baby Black Corys too. I think I might have brought myself trouble putting the corys in so soon, as I keep finding little tufts of HC at the surface . Speaking of the HC there are tiny new leaves starting to appear through the substrate so there is growth going on under there - I planted it fairly deep, so hopefully its spreading through the sub nicely

The Eleocharis acicularis looks to be doing well, with the shoots that were below the 'cutline' when I planted them, now up to twice the height of the cut blades - there are lots of new shoots popping through too.

I've a bit of phyllanthus fluitans floating in there too to see if I can get it red - the lfs has some in their nano and its an amzing deep red colour both on its leaves and roots so hopefully this will do the same. Do the leaves already there turn red, or is it the new growth that will (hopefully) be red ?

So, so far so good . Signs of growth, no signs of algae, and happy shrimp 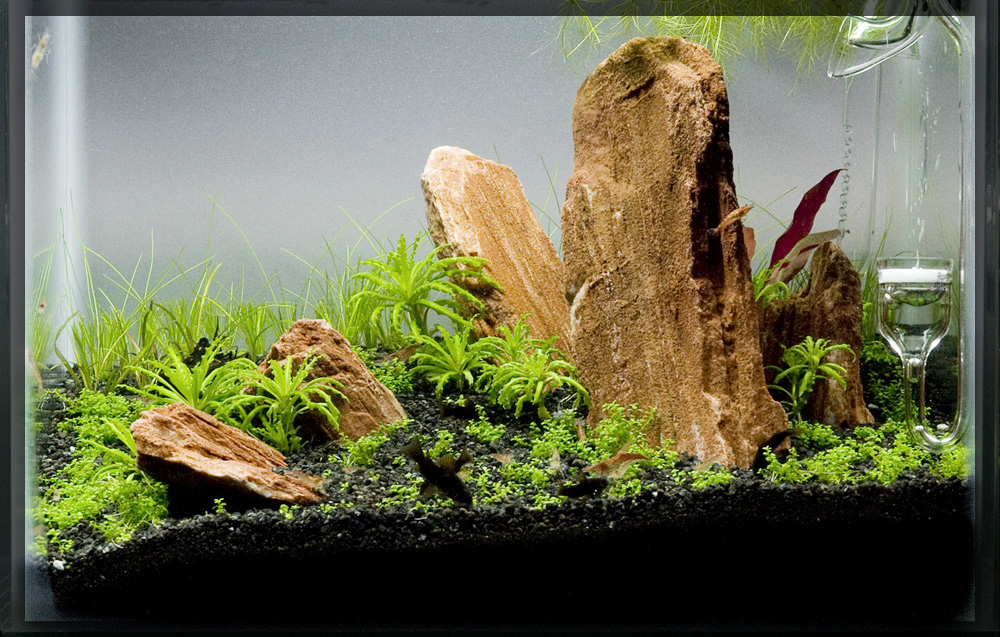 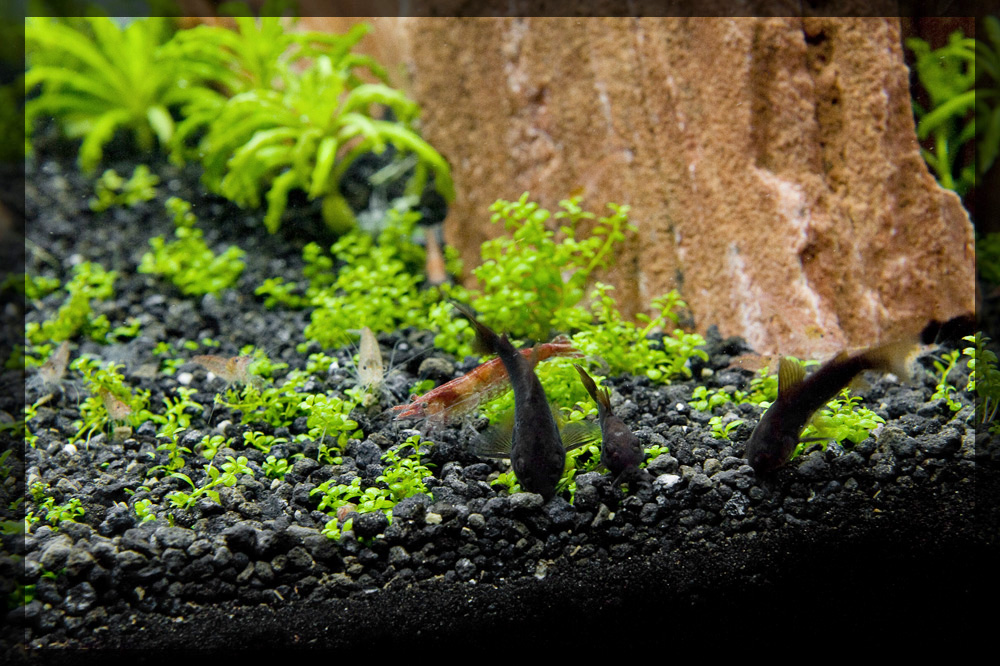 Just read the whole thread from cover to cover, what a great project. My desk has some space, maybe time to do a small nano. Have you got any up to date pics?

One question is what are you suing for C02? Kit, or Fire Ext? If its a kit which one?

Pics above your post are up to date - taken this morning

CO2 kit is an FE setup - TMC reg / solenoid, and glassware from AE.