saintly said:
the tank has a real nice summer vibe to it. photography is great mate, i see a different use of light?....
Click to expand...

Thanks Mark, and well spotted Just hand holding a little flashhead off to the left of the tank - works nicely with that background, and freezes the fish well.


aaronnorth said:
With the P.Helferi, you can leave the stems on or you can wait till they get a bit larger and then cut them off and replant them. Looking good.
Click to expand...


Superman said:
Looking good, although I'd be a bit concerned once the harlequins get bigger.
Click to expand...

I'm thinking about having a large shoal of these in the new tank Clark, they shoal so well together and play in the filter outlets too Once these 12 grow too big for the nano, I'll move them to the big tank, and get some more babies for the nano. That way they shall be forever small

Look at some of the micro rasbora species mate! Coffee bean's are awesome

Here are some of mine:

Disaster this morning - came in to find only 8 copper harlequins in the tank, and the other 4 on the desk / floor Never thought about them being jumpers

So the remaining 8 are now enjoying the space in the main tank, and I'm on the look out for a different shoaling fish for this one. Thanks for the microrasbora tip Steve - I like the kubotai's but no-one near me stocks them.

Are microrasboras prone to jumping ?

Gutted Tony Sorry to hear that. Out of interest, it might be worth checking your water quality. Bad water can sometimes cause fish to jump. I've only seen my harlies jump once, and that was last time I moved them. Luckily the tank was half empty, but it still managed to jump about 2" or 3"!

As for the micro rasbora, my coffee beans have been in an open tank for some time. I haven't seen any jump, but to be honest I've not looked down the back of the large vinyl shelf unit the tank is sitting on for some time. They seem pretty chilled out though...

Agh, good to know, I've got all my Harlequins from the main tank in my Nano cube at the moment!

Sorry to hear about your losses, although I think their flighty nature is something to do with why they shoal so well, it probably also goes hand-in-hand with a tendency to jump .

I've got a glass cover over most of it but there's a 2 inch gap where the pipes and wires feed in.

It's quite heavily planted and there's lots of surface cover though so hopefully they'll feel safe for now, once I've got my main tank settled in they'll be going back into there, but that'll be a few weeks still... (fingers crossed)

They are jumpers. I think they lay their eggs on the underside of overhanging leaves. I won't keep them in open aquariums any more . (I had R hengeli - beautiful fish .)

I caught one of my harelquins jumping once, don't know why it did. I've also had a CPD jump on me too.
My Nano Journal

Thanks guys. The other 8 seem really happy in the discus tank - they look tiny in there !

I dont think its a water quality issue Steve - I've been doing 30% changes every other day, with the same prepared RO / HMA mix I use for the discus. They are very 'flight' fish - always active, so I guess its just their tendancy (esp. if they lay eggs on leaves).

I've been playing around with flow in the nano today, as theres one particular area where the HC is doing well, and a couple of areas where it is not doing so well.

Will report with more at the weekend.

Think any fish can be a potential jumper.
Few weeks ago i woke up to a rummynose flapping about on the floor!!! Then a couple of days later, a laeticara dwarf cichlid!!!

I was away all of last week so moved the whole setup next to the discus tank so it was easier for the house sitters to feed and dose both together. Unfortunatley I did it so late the night before we went that I forgot it would be in sunlight for about 3 hours a day (and typically it was a very sunny week ) That coupled with apparent overfeeding judging by the amount of food in amongst the HC has led to an outbreak of BBA, and I think staghorn too though I'd appreciate your thoughts on that one :?: The tank side facing the sun was also thick with green dust algae. The strange thing was everything was pearling away, which it hasnt done before - more light I guess ?

So I set about cleaning things up, scraping the glass, and trimming the E Acicularis which had algae growth, and have everything back in the darkness of my studio now

This is my 1st algae outbreak, so I've been reading up on things. I've started dosing Excel as of yesterday and will do 50% water changes daily to help clear it out. What else would folks suggest ? Add some amanos or otos? Do a blackout ? Should I be removing all the bba manually (which I'm not sure how to do in amongst the HC, and on the rocks as they'll move easily) ?

Here are the pics, any suggestions gratefully received. 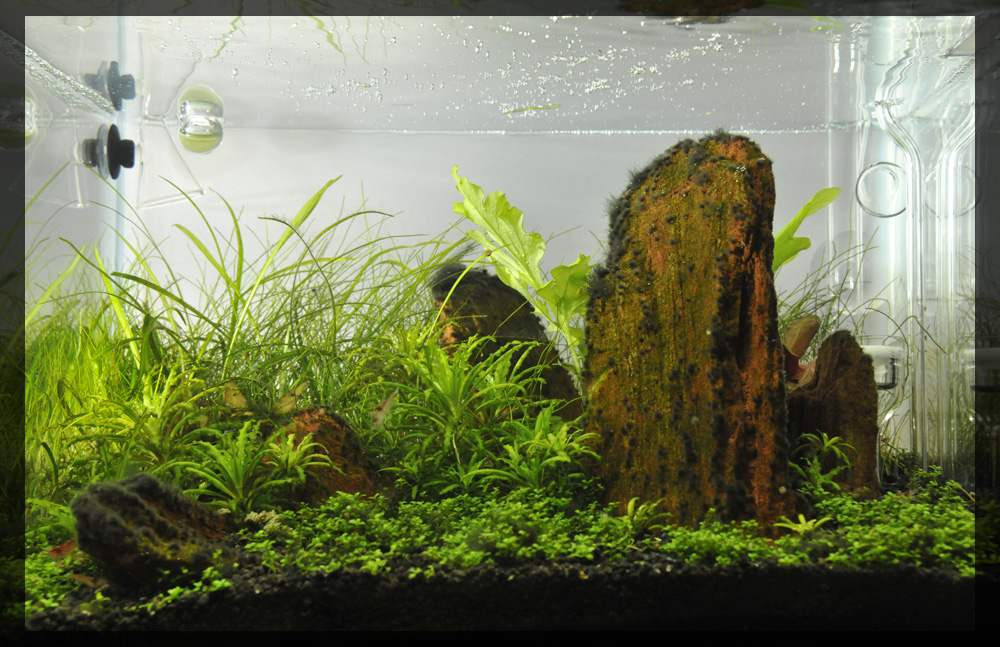 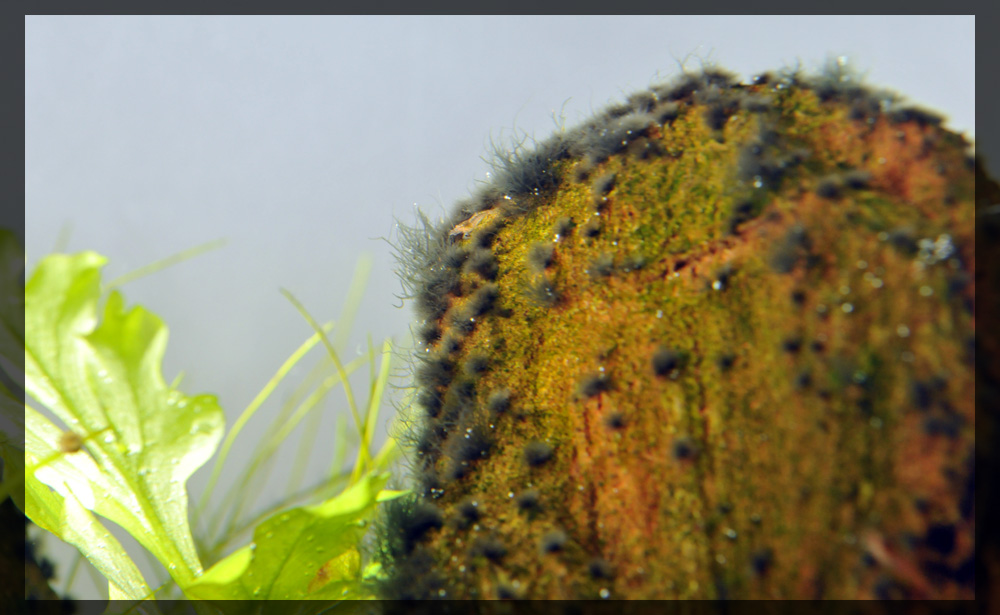 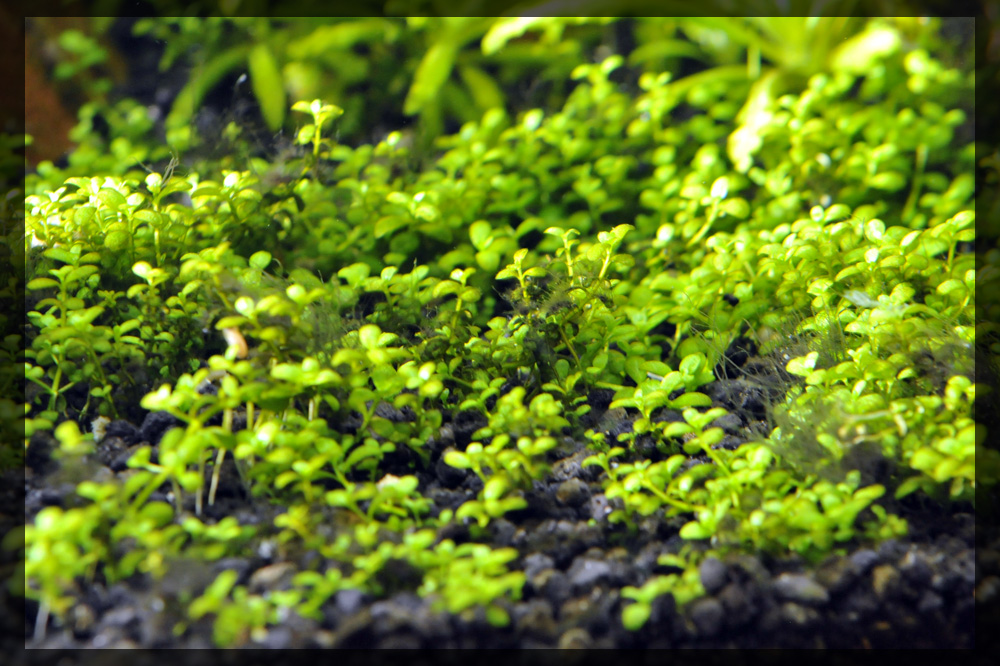 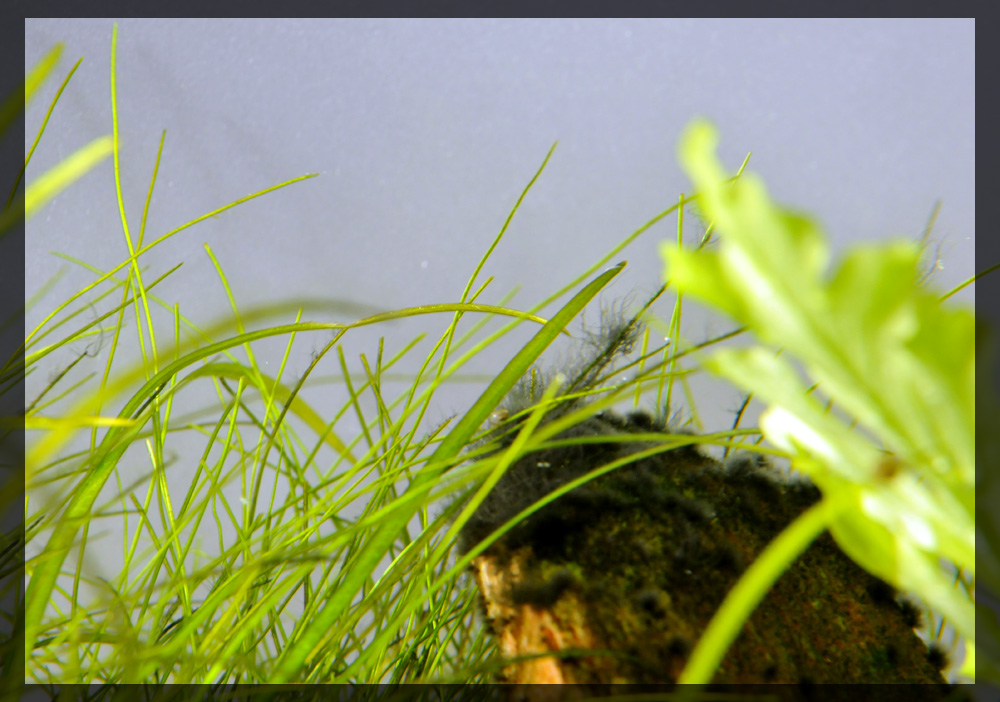 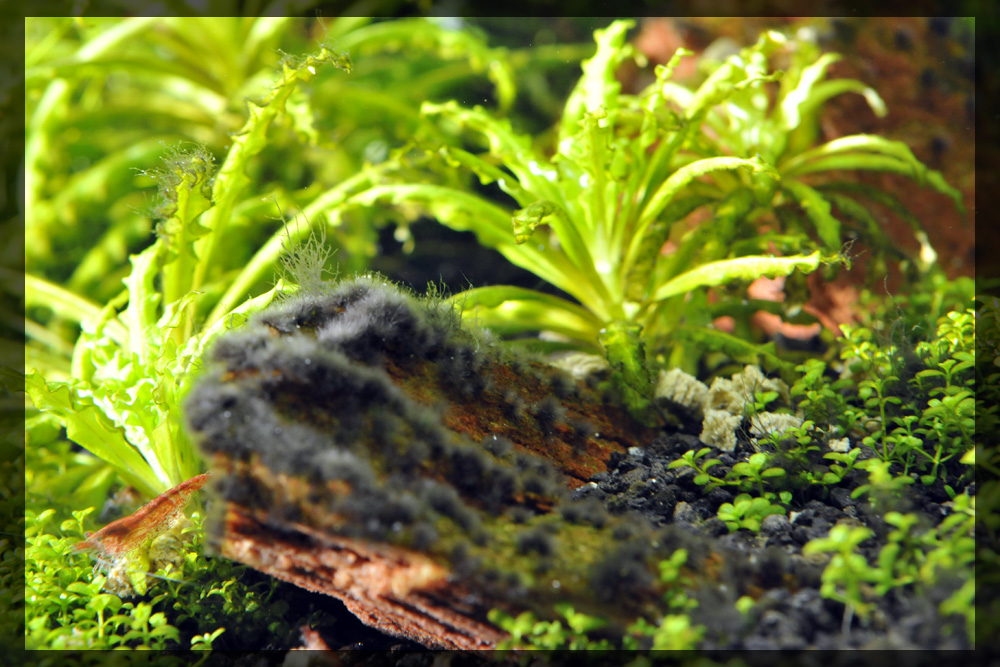 Bugger Easy Carbo directly squirted onto surrounding areas should help (turn filter off for 5 mins and use a syringe if possible).

clean the rocks with a toothbrush, then trim any plants if possible. Do a large water chnage to remove the floating alge. Then all you can do is dose with liquid carbon to remove. Spot dosing will be best for HC, but on other plants trimming is sometimes the best option.
Aaron North
My Flickr Account | Equipment needed for setting up an FE | Algae & Nutrients
M

Don't dispair, my little nano was looking like that around the time I started looking at this forum! (mainly due to a lack of maintainance, and infrequent water changes, and lack of fertilisation and co2) I tried some of the techniques on here such as using easycarbo, weekly water changes, dosing ferts weekly (not doing EI totally, although it does get a 50% water change each week) and also like they say above, judicious pruning.

It took me about 4-6 weeks but I got it back to rights eventually and I'm pretty happy with it now, the only algae I have is a bit of GSA on the heater/filter and on the glass when I forget to close the blinds and it gets direct sunlight for a few hours in the morning (as also happened to me recently! )

I'm a bit concerned about when I go away as I won't be able to dose it for a week, but I think I'll give it a clean just before, maybe dose a little higher on easycarbo and keep the blinds closed, then deal with any probs when I get back, hoping to have my auto-doser working on the main tank before I go!

Thanks for the tips guys - I think I'll have another go at the spot treatment, and the pruning before tomorrow w/c.

Matt, I've a spare dosing pump if you want to borrow it whilst your on your hols - I'm just down the road from you.

The BBAs and staghorn are both generaly due to poor co2 leavels. So, the use of organic carbon as excel or easycarbo would be good. Also adding more co2 is a option to think of. But don't forget to keep the balance beetween light, co2 and fertelization!

PS: the layout looks very good for a nano
Just scape it!

The algae is gradually clearing - lots of water changes, the excel dosing and some pruning have seen to that Its still hanging on in the lower regions under the rocks, as the excel doesnt get into there so much, but I think I'm winning now

The HC is covering at a rate now, which I'm really pleased about, as I didnt think it would take. I guess it just took a while to adjust to submersed.

Here are some pics just taken. 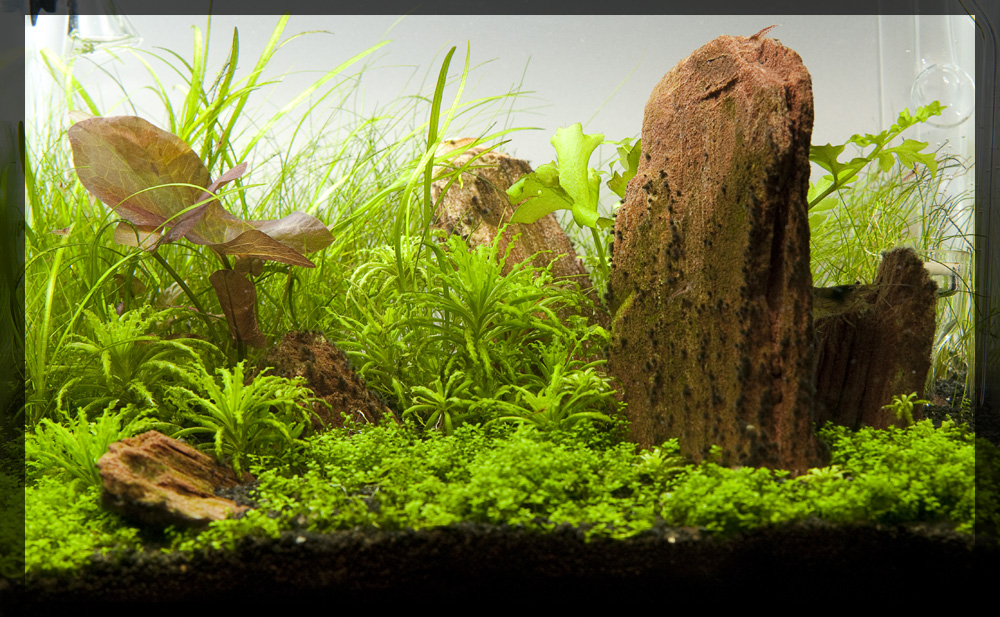 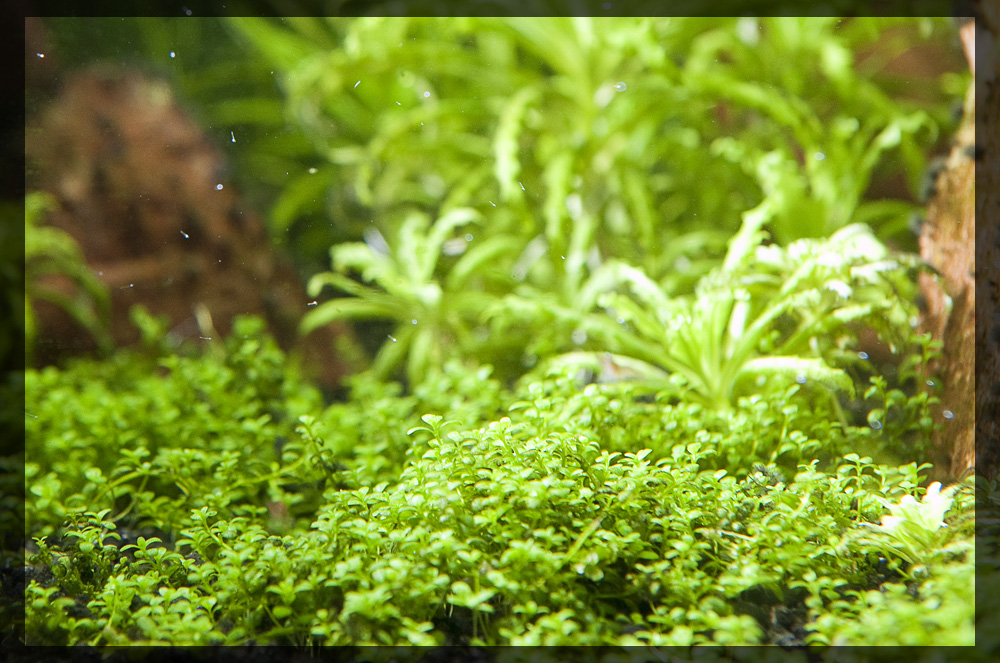 I also added an amano from the Discus tank: 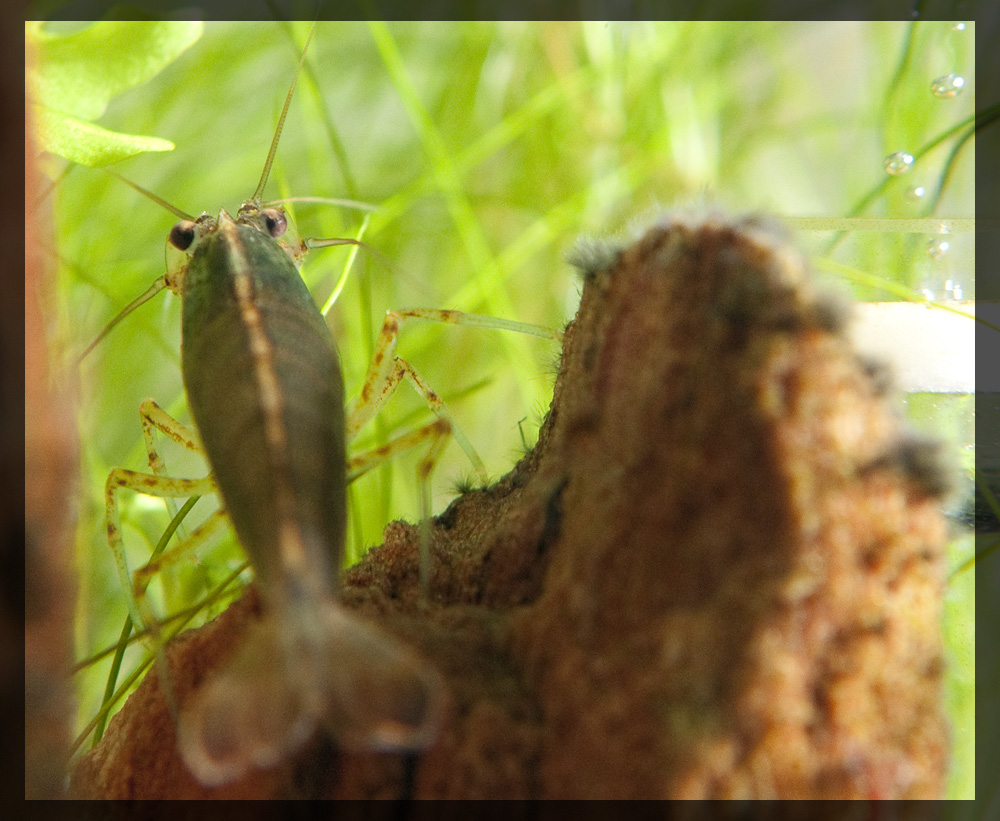 Wow that looks awsome. Nice sense of depth for such a small tank. Well done for beating the algae and persisting with the HC. Is the lotus gonna be a problem, sizewise ?

Looks great, with my HC would fill out like that.
What are you currently dosing and how have you trimmed the HC?
My Nano Journal